While we were attending the 2012 Hyundai Veloster launch at the Gold Coast, Hyundai gave us a special treat and unveiled a near production-ready version of the Hyundai Veloster Turbo. This is the first time the car has been shown in Australia. 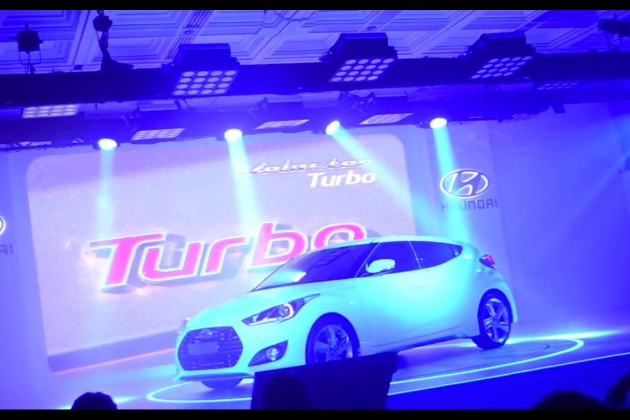 As you can see, the Hyundai Veloster Turbo features all of the trimmings as seen on the Veloster Turbo unveiled at the 2012 North American International Auto Show last year. Only, instead of the matt grey paint, it presents a more conventional white coat.

The prototype also appears to feature glowing highlights around the front grille, headlights, and side skirts. It’s a safe bet these are unlikely to exist on the production version, heading for local showrooms during the third quarter of this year.

Hyundai told PerformanceDrive the Veloster Turbo in Australia would offer around a 50 per cent increase in power over the normal Veloster, which puts it on par with the version unveiled in the US. It comprises of a turbocharged version of the 1.6-litre GDI four-cylinder with direct injection, producing 152kW and 265Nm (up from the standard 103kW and 166Nm).

As for the price, Hyundai Australia wouldn’t budge on revealing figures, even when pitched with the idea of a price starting with a ‘3’. However, we expect it will need to be somewhat lower than $40,000 so it comes in as a cheaper alternative to the Volkswagen Golf GTI.

In other Veloster news, speaking with an internal source, PerformanceDrive speculated about even further variants of the Veloster for the future, including a convertible. The source said there are currently no plans for a convertible, but said “you can never say never”.

Hyundai currently doesn’t offer a convertible in its lineup. It may be an alley the company will look at going down in the not-too-distant future though, especially as it continues to cater for – and make an impact on – the US and Euro markets.

Click play on our video below for the Veloster Turbo Australian reveal.