HSV is celebrating the production of its 85,000th vehicle at its Melbourne-based facility. The milestone car was a blue Clubsport R8 LSA sedan. 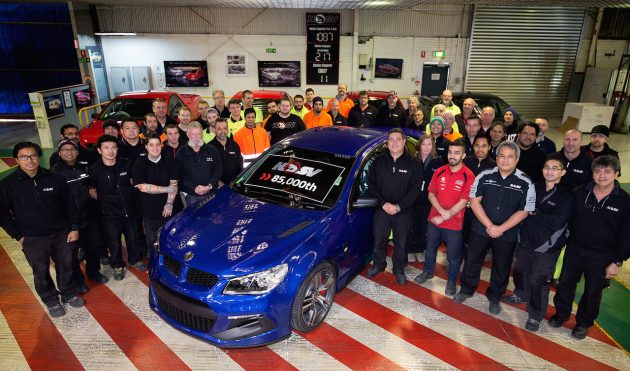 “From humble beginnings at our Notting Hill production facility in 1987, with just three employees, a single desk, two chairs and one telephone, to the production of our 85,000th vehicle, we are constantly reminded of the dedication and passion our employees, dealers and owners continue to show.”

The Clubsport in question comes with a special build plate noting the milestone status, along with a letter of authenticity signed by Jackson. It, strangely, is un-sold for the moment, but we’re sure this won’t last long. Interested punters need to head over to Garry and Warren Smith HSV in Oakleigh where the car is headed. The dealership is the oldest HSV dealership.

With production soon coming to an end there’s been a lot of rumours heating up surrounding the idea of a last-hurrah special edition. Most of the signs point to some kind of ‘GTS-R’ model based on the top GTS, however, there is a chance HSV will launch special edition versions of all nameplates.

Last week the company announced a limited edition run for the last of the LS3-powered models. These, called the SV Black and Track Edition, will go into production in September this year.

HSV will be celebrating is 30th anniversary next year so it seems logical the company will want to celebrate that in some way as well. Could there be a number of special editions to give the performance brand a proper send off? We’ll have to wait and see.

Interestingly, most of the previous milestone models were based on the Clubsport. Take a look below for a brief history on HSV’s production efforts.