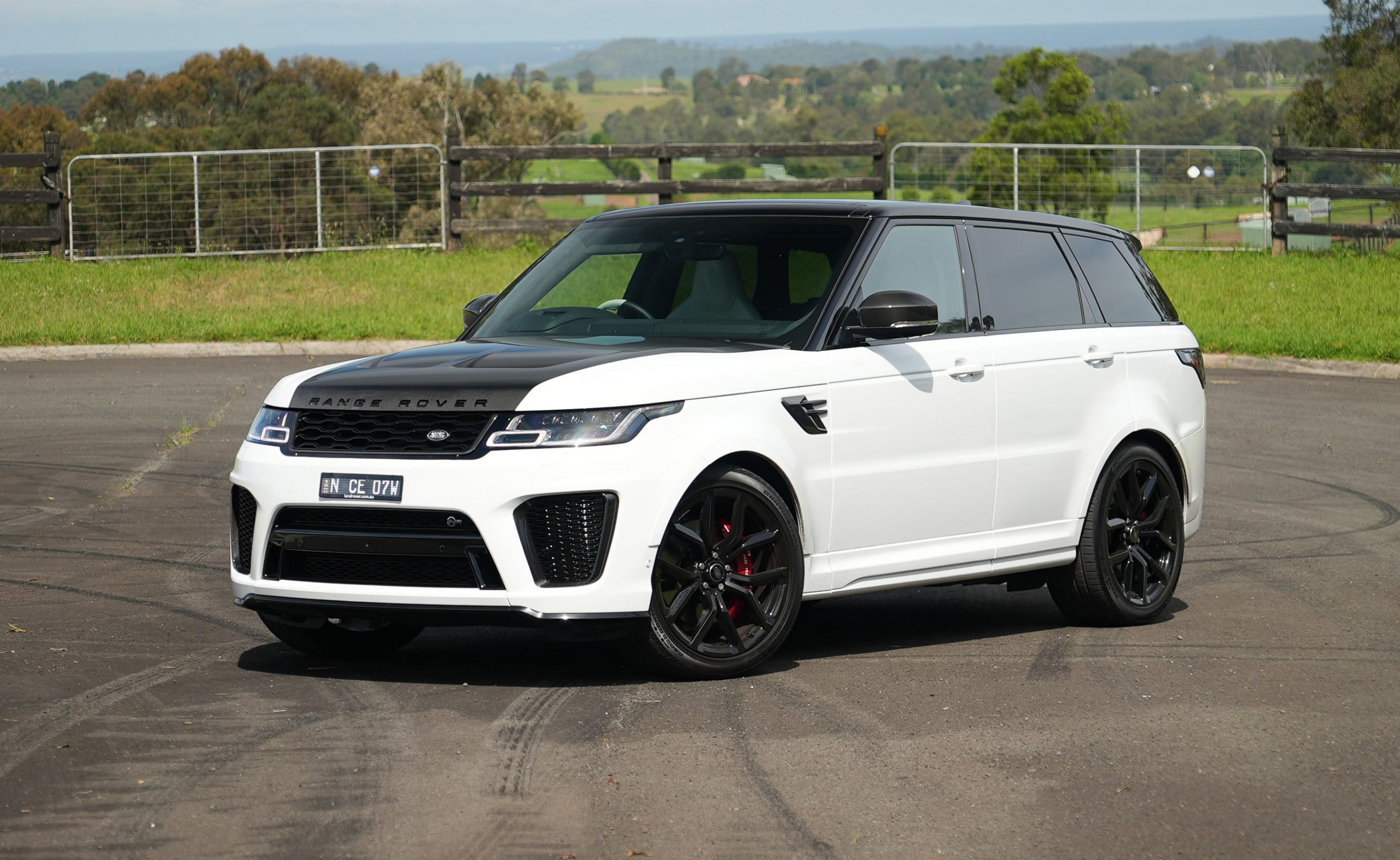 When it comes to badass performance SUVs, the Range Rover Sport SVR is pretty much the boss of the gang. And further cementing its status is the Carbon Edition, introduced for the 2021 model update. 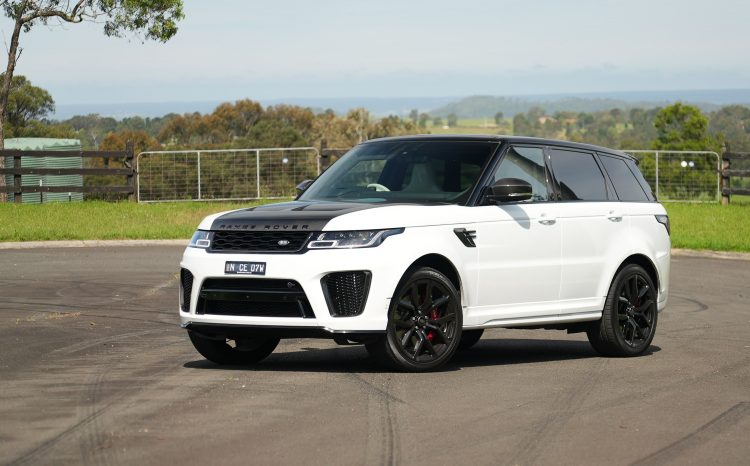 The latest, second-generation Range Rover Sport has been around now since 2013. However, Land Rover has applied various updates along the way, including a facelift in 2017. This brought in some tweaks to the iconic stunning design and a big boost in technology. Even so, it is getting on a bit now and there is a new generation model on the horizon for next year.

The SVR is the flagship performance model, designed and developed by Jaguar Land Rover’s Special Vehicle Operations division. It features a bespoke aero kit for the exterior, as well as uprated brakes, and a special sports air suspension setup. An angry supercharged V8 also beats beneath the bonnet. The Carbon Edition steps above all of that by featuring exotic treatment, although, this is not technically limited-build model. Instead, it is produced as per a build-to-order setup. This gives customers an opportunity to specify and package together something really unique.

Prices start from $275,803 for the Carbon Edition, which is about $30,000 more than the regular SVR. A concern is the SVR is already a high-priced model, especially if you compare it to like-minded hypo SUVs in this space – even the Porsche Cayenne Turbo undercuts the Carbon Edition by around $25,000. BMW’s X5 M Competition (from $212,417) and the Mercedes-AMG GLE 63 S (from $220,600) are less expensive, and yet they offer more serious performance. But, we know, the Sport is a lot more desirable than any of those. 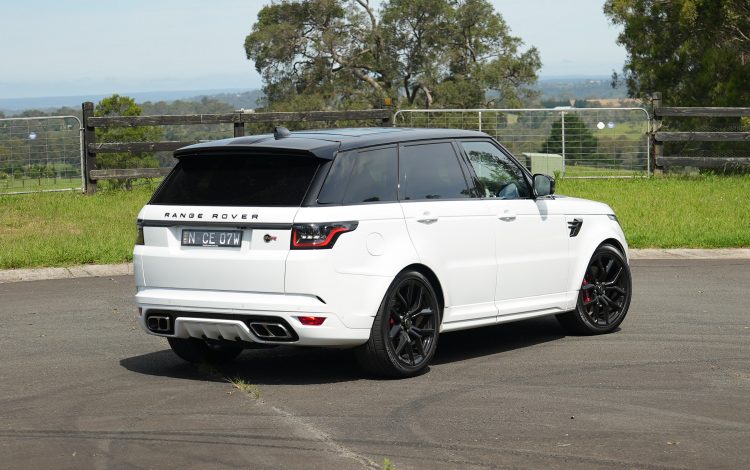 As standard, the Carbon Edition comes with these massive 22-inch wheels, in black, wrapped in 285/40 Continental Cross Contact tyres. They obviously aren’t absolutely ideal for serious off-roading, but they do provide enormous grip on tarmac, including excellent wet-weather performance.

Continuing with the darkened theme are naked carbon fibre side vents on the front guards, side mirror caps, and a full carbon fibre bonnet, complete with real heat extraction vents. The side portions of the bonnet are painted in body colour, giving it a Mansory-like (aftermarket tuner) character. It is very ‘street tuner’. 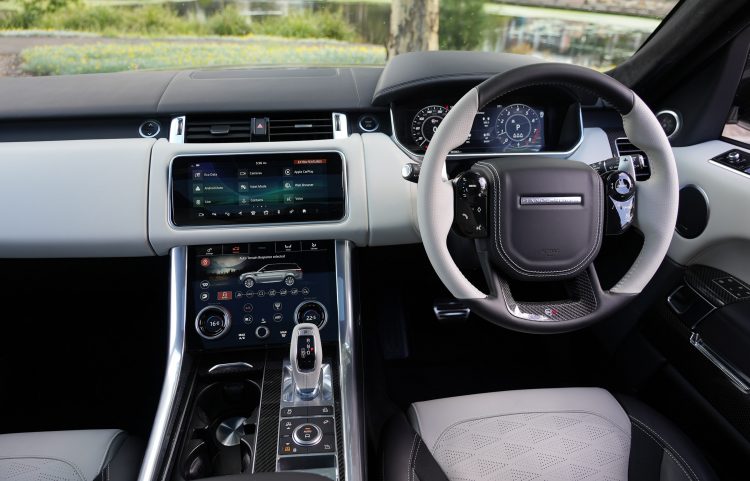 Inside, the cabin is just as elegant and luxurious as the regular Sport, in that, it is perhaps the most opulent of the class. Only this comes with a number of SVR garnishes, and a few swathes of carbon fibre. This example shows off a two-tone black and white upholstery package, obviously a perfect match for this exterior theme. There are a number of other no-cost optional interior packages available too, as well as some pricey extra-indulgent appointments.

Some of the costly options should not be options though, in our opinion. For example, parking assistance (auto steering) and adaptive cruise control will set you back $2738 – the ‘driver assist pack’. That’s a bit steep for a $275k vehicle. Four-zone climate control is $1890, which, again, should probably be standard on a vehicle like this, and tyre pressure monitoring is $950. That last one in particular is outrageous considering such tech comes standard on a $23,420 Hyundai i30 base model. 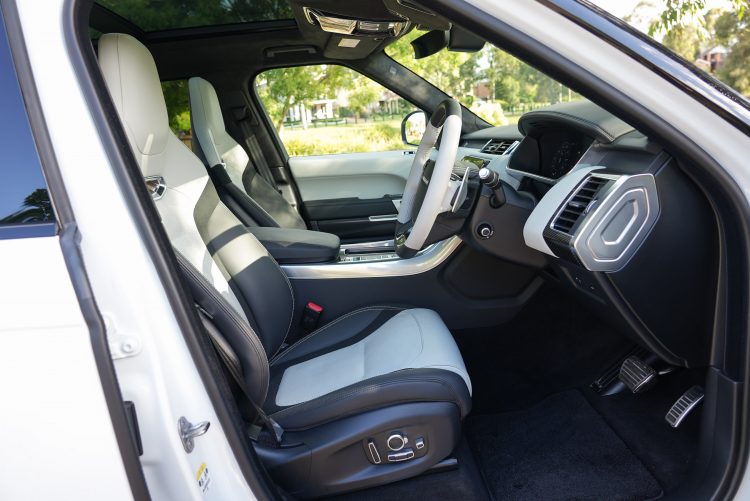 We love the big yet supportive seats in the front, and the twin touch-screens on the dash are just exquisite. Drivers can play around with all of the usual driving modes too, using Land Rover’s familiar terrain dial on the console. Each mode has a corresponding animated display on the lower screen to help you understand the expertise of each mode. And then up above, the main screen at the top can be electronically tilted to suit your height.

A sign of its underlying age is the lack of JLR’s latest Pivo Pro infotainment operating system and beautiful curved touch-screen, like what you get on the latest Jaguar F-PACE, for example. The graphics here are quite nice but the main letdown is the lagging and loading times for many of the functions. Select ‘media’ and then go and make yourself a cup of tea. The menu will be ready to display by the time you get back. 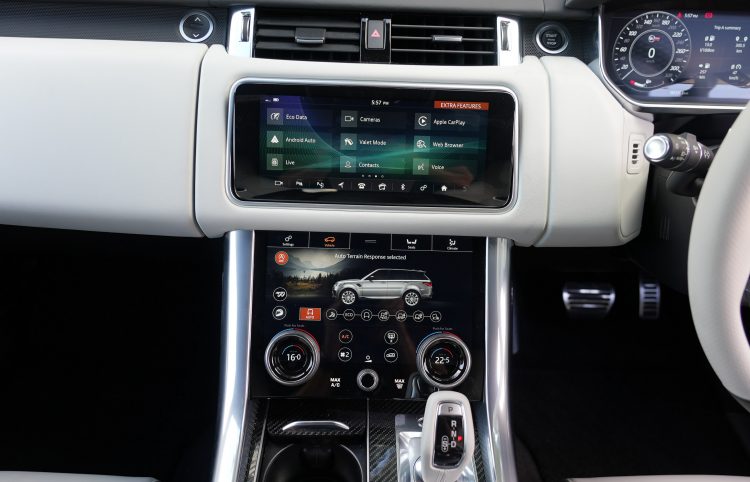 Yet more carbon fibre is spread throughout the interior, including on the centre console and for the very cool hidden pockets in the front doors – we can only imagine what you could hide in them. Other high-quality materials are found elsewhere, including aluminium for the two solid beams that run down the chunky centre console, thick carpet mats, and plush roof lining.

Passenger space is very good, with a tall and upright cabin orientation providing a very clear and open view of your outward surroundings. Traditional low window sills assist here too, and the driving position is commanding yet somewhat submerged and sporty. 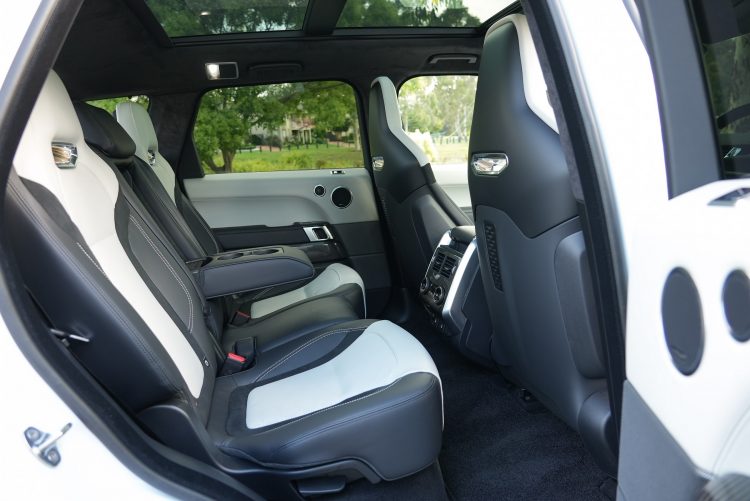 Rear passengers are presented with heaps of legroom, and there’s even a completely flat floor, which helps to optimise middle-seat room. This example features the full climate control package, and yet more of that carbon fibre is used on the doors. A big flip-down centre arm rest with cup holders and bottle holders in the doors add further practicality.

Up at the back, the latest Sport offers excellent boot space, with an impressive 780 litres as standard, and up to 1686L when the rear seats are folded down. You can also lower the load height via buttons on the wall, thanks to the air suspension underneath, while beneath the floor is a space-saver spare wheel.

Overall, the package certainly resembles a very expensive, high-end luxury vehicle. It’s just some areas are starting to fall behind in terms of advanced technology, even missing out on JLR’s own latest and greatest gadgets. 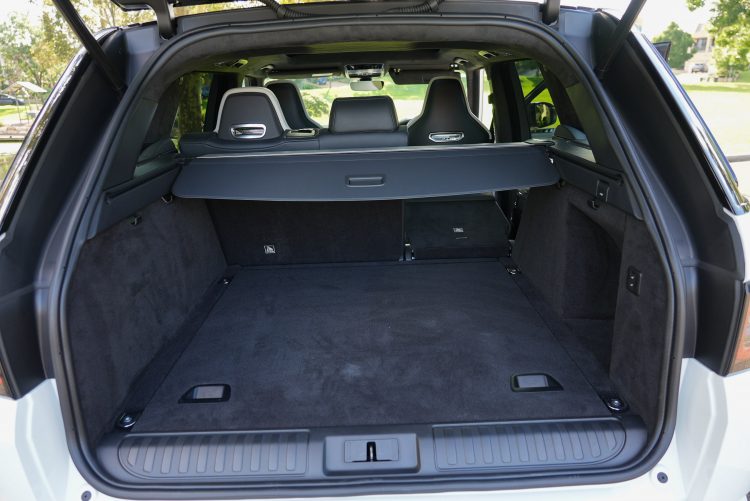 In the engine room is the now-outgoing 5.0-litre supercharged V8. Range Rover is set to adopt a BMW twin-turbo V8 in the future, like the all-new big Range Rover showroom flagship coming next year. We will miss this 5.0L unit though, as it has a lot character and it belts out an almighty soundtrack. The supercharger also provides instant throttle response which you just don’t get from a twin-turbo unit. In fact, the sheer level of heave straight off the line is immense, lifting the nose like a racing powerboat.

Across the usual sprints the best 0-100km/h time we could achieve was 5.00 seconds exactly. We tried everything from manually shifting from first gear to loading up some revs on the brake pedal. Land Rover claims the sprint can be done in 4.5 seconds. We also clocked the quarter mile in a brisk 13.24 seconds, and 0-200km/h in 17.42 seconds. It is ferociously fast for a big, 2239kg SUV. 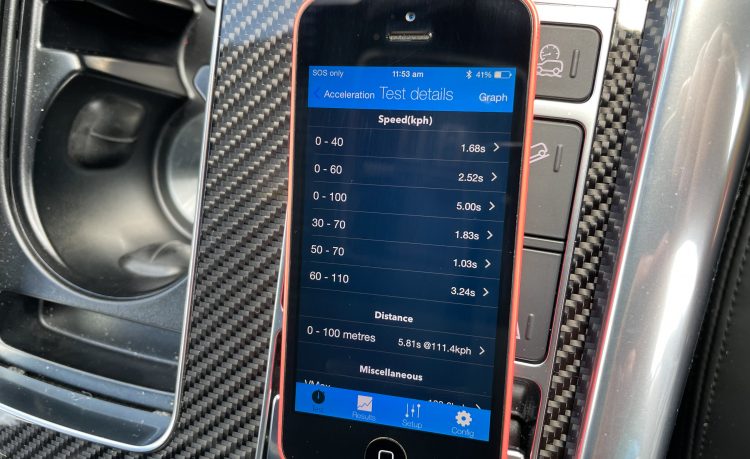 Despite the massive power and torque, the SVR is not all about straight-line speed. It can also tackle the corners with surprising agility. It prefers higher-speed sweeping bends as opposed to tighter ones, mainly due to its weight, but it can certainly give many sports cars a run for their money. The steering is quick and responsive, and grip from the 285 tyres is plentiful, as mentioned.

Unlike many super SUVs in this space, the ride comfort here is superb. Yes, it is slightly firmer than the regular Sport, but that’s just so it can brace itself around corners with minimal lean, and change directions with much more composure than the regular variants. It doesn’t feel as committed in the bends as some of the German rivals, but then they don’t offer the pleasant ride that you get here. 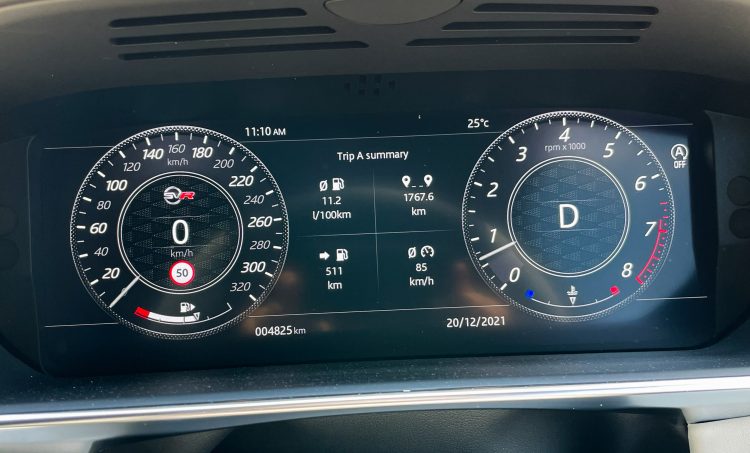 Despite the high figures on paper it is possible to see lower numbers in the real world, at least for consumption. During our test we took the beast for a trip down to Winton Raceway for an unrelated event. The circa-1300km round trip, along with our usual test drives and performance tests spat out an average of just 11.2L/100km. All up the distance covered over the week was about 1800km. And we only engaged the Eco driving mode towards the end of our test. Admittedly, we didn’t notice the mode until later in our drive otherwise we would have utilised it.

With a 105-litre fuel tank filled to the brim the theoretical average range is 812km, but we reckon you could get around 900km out of it if you tried. Compared with those rivals mentioned above this offers the longest theoretical range of them all due to their smaller tanks; 664km, 645km, 756km, respective to the order mentioned above. So, as you might expect, the Range Rover is the king of grand touring capability in this regard. 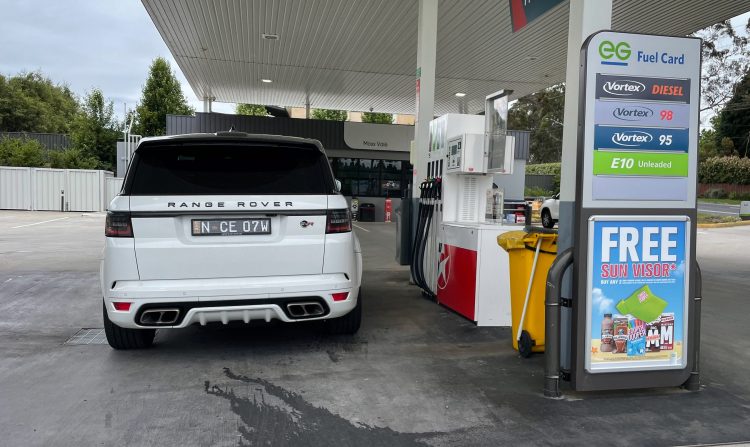 It is one of the most desirable SUVs on the market, there is no doubt about that. It features an epic 5.0L supercharged V8, the design is gorgeous and even more so inside, while the Carbon Edition gives it full-on aftermarket-like appeal and exclusivity. You also won’t find an overall more capable SUV in this segment. Not one that can blend on-road comfort and dynamics and real off-road skills anyway. We look forward to seeing what the next chapter of the famous Sport entails next year.

PROS:
– Carbon Edition brings aftermarket style and exclusivity
– Beastly supercharged V8 engine sounds insane
– Beautiful presentation and integration of technology inside
– Loads of passenger space and freedom, flat floor, and big boot
– Air suspension is firmer than regular Sport, but still one of the nicest rides in the performance class

CONS:
– Current-gen has been around since 2013, lacks cutting-edge tech
– Officially one of the thirstiest/dirtiest V8s in its class
– Steep price compared with key performance rivals