The HSV Clubsport SV Black Edition is now on show at the 2011 Australian International Motor Show in Melbourne. Like various other international manufacturers, HSV has taken on the increasingly popular ‘Black’ edition theme. It features various modern muscle car charcaracteristics and trimmings. 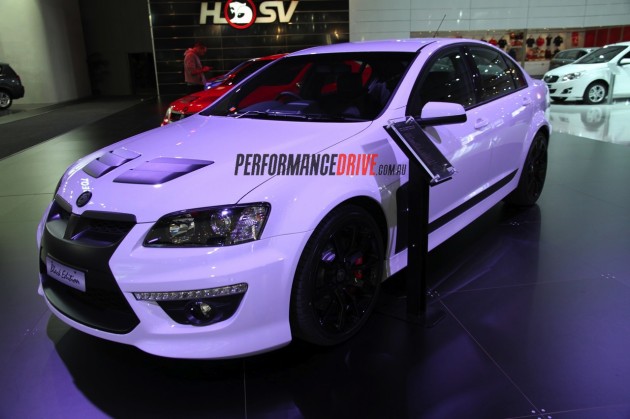 Starting with the body, HSV has come up with a fresh new bodykit for the Black Edition. It’s chunky, it’s loud and even though it’s mostly white, it’s very flamboyant. There’s coarse black vents on the bonnet that look a bit like shark gills, a black ‘mouth’ which flows down to the centre section of the lower front bar, and a set of 20-inch forged black alloy wheels to complete the picture.

The overall styling goes for that popular black and white layout. It looks pretty good on some cars, but we fear it may be starting to go out of fashion. It’s a bit, chin-stroking ‘I don’t know’. Tell us what do you think though, we may have jumped the gun.

Anyway, what we all want to know is, what’s under the hood? Unfortunately, there’s no supercharged 7.0-litre V8 producing an incomprehensible amount of horsepower sitting under there, it simply features the standard 6.2-litre V8 punching out 317kW and 550Nm of traction-destroying torque.

HSV will be putting the SV Black Edition into production and it will be apart of the HSV lineup in September. But we think this is a good move.These types of cars are a dying breed, with and more advanced technologies being developed, it’s only a matter of time before they go exstinct. Maybe one day they’ll be an ‘i-HSV’, with some kind of hydrogen hybrid, who knows. Until then, let’s enjoy these beasts while we can.