Honda has revealed plans to develop a hotter version of the CR-Z, likely to be called a Honda CR-Z Type R. Even though cars are becoming greener and greener, it doesn’t always mean performance has to be shelved in place of environmentally-friendly technologies. 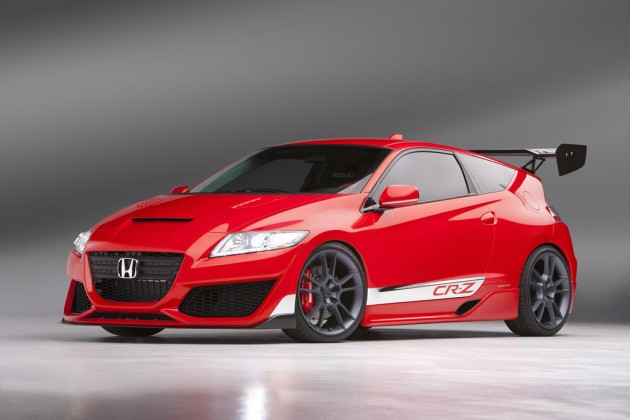 According to the Temple of VTEC, who spoke with CR-Z project leader Norio Tomobe-san, Honda is developing a sports version of the already sporty model. Many have jumped to the speculation that the sports version will be a Honda CR-Z Type R, and that it will be inspired by the Honda CR-Z Hybrid R concept (pictured), first unveiled at the 2010 SEMA Show.

Official details on the engine are yet to be finalised, but a likely powertrain candidate is a supercharged 1.5-litre four-cylinder petrol engine matched to the Honda Motor Assist electric hybrid system. We can expect a combined power output of around 150kW.

It may not sound like an outright powerhouse, but keep in mind some of the latest sporty compact would-be rivals, including the upcoming Toyota FT-86 and Subaru BRZ, will deliver a similar output when they are released.

We’d love to see a Honda CR-Z Type R come into reality, as that’s one of the elements missing from Honda these days; a proper hard-edged sports car. We all know the company is capable of doing it. Stay tuned for more updates.