Honda has released some early previews of a new Honda Small Sports EV Concept it plans to unveil at the 2011 Tokyo Motor Show at the end of this month. 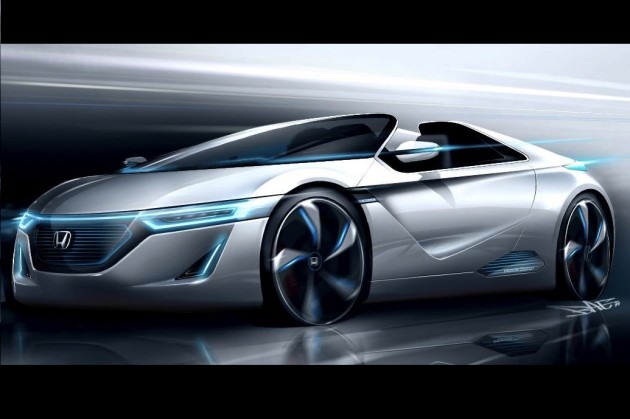 Limited details of the new concept have been revealed, other than the fact that it does use a fully electric powertrain system. From the image we can also see that it will feature an open-top targa-style roof and a very low and sleek profile.

The first thing that springs to mind is ‘NSX’. Although the Honda Small Sports EV Concept cant’ be taken as a possible version of the upcoming new Honda NSX that has been confirmed and is on the way, some elements of its design are said to at least provide inspiration for the new model.

These traits will be the main aim for the next-generation Honda NSX. Honda CEO Takanobu Ito has previously told Autocar in the UK that

“You can’t depend on a high power output to call a car ‘sports’ any more. The original NSX was about high power and good driving performance, but today power-to-weight is what we must focus on. We will not chase Ferrari for outright power; we want to chase efficiency as well.”

As for the Honda Small Sports EV Concept, Honda has said a few word that seem to blend in with Ito’s philosophy. The company said the concept is,

We look forward to providing all the updates on this, and other highlights of the 2011 Tokyo Motor Show starting November 30. Stay tuned. In the meantime, what do you think of the design?