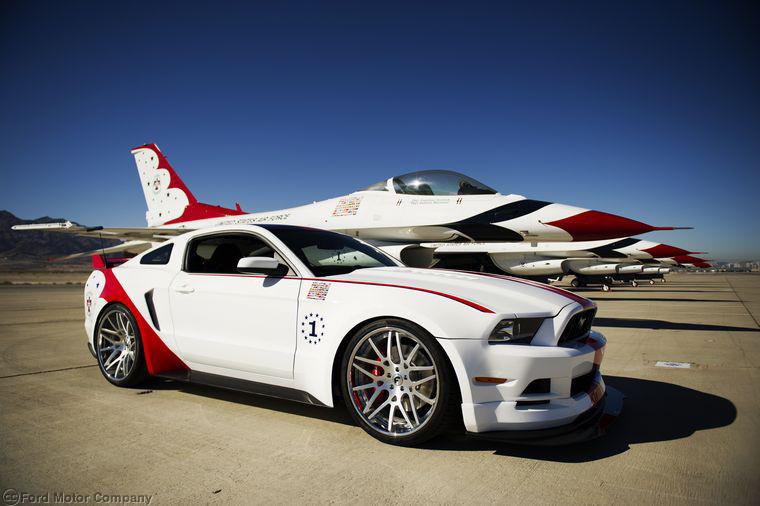 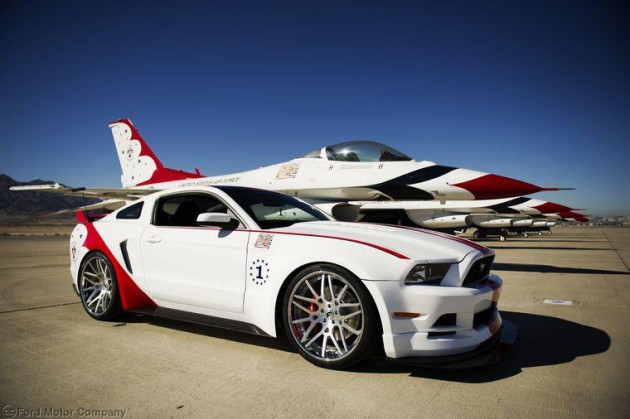 The striking livery matches the layout seen on the F-16 Falcon fighter jets used by the U.S. Thunderbirds. It includes dominate red stripes down the bonnet and up the rear wheel arches and along the rear wing. You would have to agree, it looks pretty awesome.

Not satisfied with stopping at a colour change, Ford also went further and fitted a chunky wide bodykit, with pumped front wheel arches, muscly rear haunches with their own intake vents, and a deeper front spoiler. It’s all complimented by a set of Forgiato 22-inch alloy wheels.

Mechanically, Ford decided to give the Mustang some more serious power thanks to an added supercharger unit, while the suspension has been  revised for a more sporty tune. There’s also some large Brembo brakes to make sure it stops as good as it goes.

The interior has been given a set of Recaro bucket seats, special sill plates, and a tweaked sat-nav unit. The instrument cluster has also been swapped for a special edition version. To save some weight, the rear seats have been removed.

If you’re interested in buying one of these bad boys, and let’s face it, who isn’t? You will have to be very lucky as this one-off example will be going up for auction at the Experimental Aircraft Association AirVenture show in Wisconsin, US, on August 1.

The money raised will go to the EAA Young Eagles program to help support young starters in the aviation industry.