It seems a red Audi TT sports car in the UK has somehow managed to not only crash into a house, but fly, periodically, just before impact. Whether the Audi tried to ‘bunny-hop’ the house only to fall short to avoid a collision is unknown. 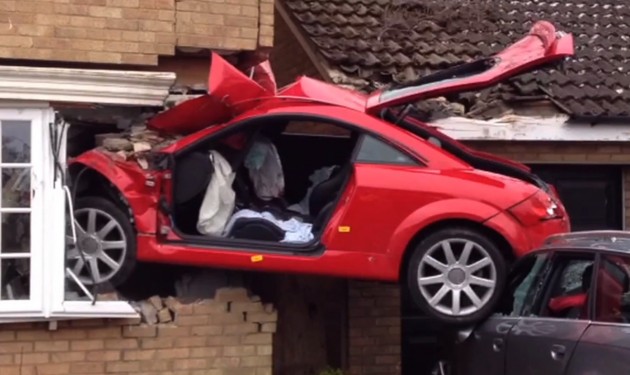 More seriously though, a male driver, believed to be in his 20s, has been taken to hospital with head injuries after crashing into a house in the Suffolk area.

It’s understood the sports car caught some air from the footpath, dived across an Audi A4 and a BMW 3 Series parked in the driveway, only to land in the side of the house. The accident occurred at around 1:45am on Sunday morning.

According to a recent BBC report there were three people inside the home at the time, however, nobody was injured. Nearby neighbours described the crash as an “explosion” as the TT crash landed.

Click play below to see the aftermath of the acrobatic Audi, and the Audi A4 being pulled from beneath it.