Over 50 Ferrari F40 supercars are set to set a world record at the Silverstone Classic this year, with the Ferrari Owners’ Club of Great Britain receiving 50 entrant registrations from F40 owners. 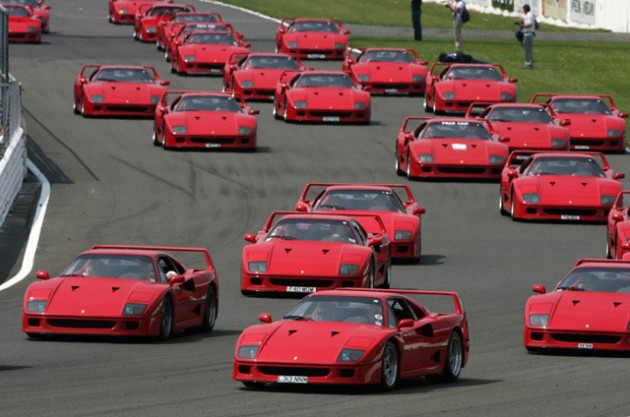 The previous record, held by the same club, was a parade of 40 Ferrari F40s during the 2007 Silverstone Classic. Nigel Chiltern-Hunt, the club’s co-ordinator for the annual parade, was surprised at the amount of keen entrants, recently saying,

“Our original aim was to get at least 25 of these Ferraris together and, as I have contacted owners, I have been gratified that so many want to be part of the celebration – so much so that we now have more than 50 F40s registered for the event with more still to come!”

Just 1315 of the iconic super cars were ever made, each featuring a full carbon fibre body – a very advanced technology in its time – and a 2.9-litre twin-turbo V8 producing 352kW. It was also one of the first-ever road cars to crack the 200mph (322km/h) mark.

Nick Wigley, event organiser, recently said, “Silverstone is the perfect place for Ferrari to be celebrating this important milestone in the incredible F40’s history. It was, of course, at Silverstone in 1951 that Ferrari achieved its first grand prix win and, since then, the circuit has witnessed countless more Ferrari victories, most recently when Fernando Alonso won last year’s British Grand Prix.

“Now the promise of a record number of Ferrari F40s lining up on the infield is another major attraction. It’s a truly mouthwatering prospect that no supercar enthusiast will want to miss.”

The 2012 Silverstone Classic will take place on the weekend of July 20 to 22.