Ferrari has announced the winners of the 2011 Ferrari World Design Contest. It was Korea’s Hongik University and its Ferrari Eternita concept, designed by three students Kim Cheong Ju, Ahn Dre and Lee Sahngseok, that came home with first prize. The team from Hongik University put in a dramatic yet elegant supercar profile which Ferrari says fulfills the goal of the contest the best out of all applicants. 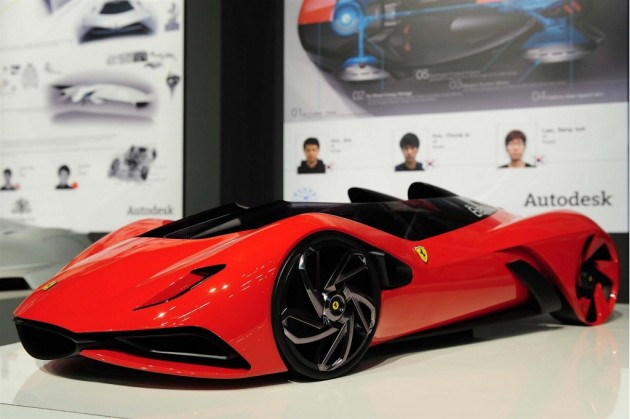 The main goal or aim applicants had to exhibit in their designs was to take all elements of the hypercar philosophy to the extreme. This meant there was very little in the way of limitations. Each team had to come up with a 1:4 scale model of their final product, as well as a 2D sketch and a 3D computer design.

From the front, the Eternita shows a very low and pointed nose cone which blends straight into the bonnet lines and up over the windscreen and through the high front wheel wells.

The side also shows-off that increasingly popular ‘high-arch’ sill panel, similar to a Pagani Zonda, flowing into the almost-mandatory-for-a-supercar large side air intakes which are placed underneath the unique open-cut rear wheels.

Second and third place contestant designs were also quite attractive.

Second place was the Xezri by Samir Sadikhov (Azerbeidzjan) from IED in Turin, Italy. The concept looks like it could easily be a future Ferrari production model. The body layout is imposing, consistent, low-slung and swooping, and actually blends in with Ferrari’s tradition quite well, wouldn’t you say?

While third place winner, the Cavallo Bianco designed by Henry Cloke (UK) and Qi Haitao (China), both from the Royal College of Arts in London, takes hypercar designs to the extreme. From its ‘double-hull’ front end looks to the extremely low-profile roof layout, it’s certainly a concept that attracts attention.

Take a look through our gallery below and tell us, what’s your favourite? We have tried to name the images which represent the winners as best as we can.