In what has been described as one of the most expensive public road car accidents ever, 14 cars, including eight Ferraris and a Lamborghini, were destroyed in a big Japanese freeway crash yesterday. 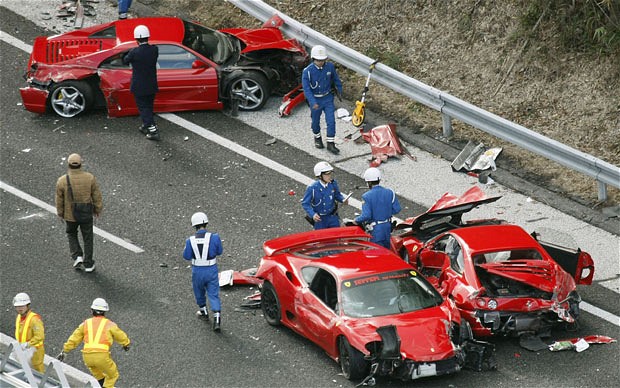 Some of Japan’s big expressways are renowned for relatively high-speed driving, similar to autobahns in Germany. And, like everywhere in the world, accidents do happen. It’s very rare that they involve such a fine collection of cars like this though.

It’s believed the supercars, travelling along Chugoku Expressway in Shimonoseki, Yamaguchi Prefeture, were part of a club of some sort and were driving along together at speeds above 130km/h. One of the Ferrari’s then hit a medium strip, ricocheting into another car, which then snowballed into the mass destruction you see here.

The drivers in the group were aged between 37 and 60. Mitsuyoshi Isejima, executive officer for Yamaguchi Prefecture’s Expressway Traffic Police unit recently said,

“The accident occurred when the driver of a red Ferrari was switching from the right lane to the left and skidded. It was a gathering of narcissists.”

Included in the unfortunate pileup was at least two Ferrari 360s, two Ferrari 355s, a Ferrari 430 and a Ferrari 430 Scuderia, a Lamborghini Diablo, three Mercedes-Benz vehicles – including a CL600, and a Nissan GT-R. Oh, and a Toyota Prius. 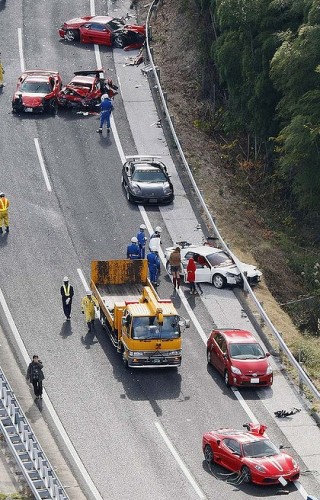 Luckily no one was seriously injured in the 14-car pileup, however, a number of those involved were taken to hospital for treatment on minor injuries. By the looks of the white Ferrari 512, things came very close to being much worse.