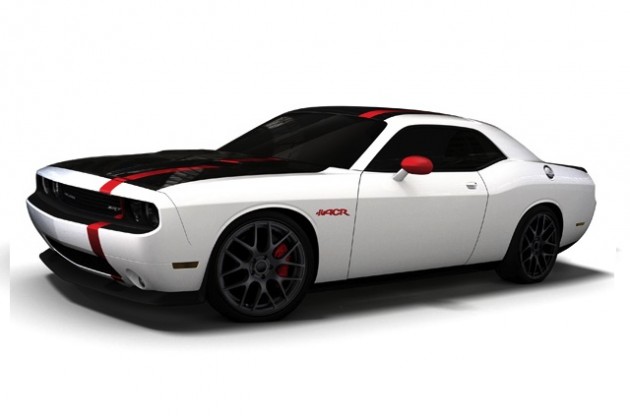 The Dodge Challenger SRT8 ACR, previewed here in digital form, will be part of 30 vehicles Chrysler Group will have on display at the show. With many of them exhibiting modified and enhanced elements. Pietro Gorlier, president and CEO of Mopar, recently said,

“The aftermarket is a $34 billion-a-year industry and SEMA is the perfect place to showcase everything that Mopar has to offer. At Mopar, we believe in giving our customers a lot of choices when they go to personalise their vehicles.

“And that is why we offer extreme personalisation for every single car in our showrooms. In addition to head-turning image vehicles at the SEMA show, we also will introduce new must-see product and technology.”

In the Sixties and Seventies, companies and Mopar used to offer package deals to remove options from cars for the racing enthusiasts. A bit like they do now. Subaru and Mitsubishi in Japan, for instance, offer stripped out lightweight versions of the WRX and EVO.

As well as exhibiting a focused stripped out theme, the Dodge Challenger SRT8 ACR will feature a number of added on features, including a carbon fibre bonnet, rear spoiler and light clusters at the rear, as well as carbon fibre trimmings inside.

Underneath, the Mopar-enhanced Challenger will feature coilover suspension attached to 20-inch black alloy wheels. Mopar will also preview a full ‘cat-back’ exhaust system with extractors for extra noise and power.

Unfortunately, Dodge hasn’t said anything about a possible production version of the Dodge Challenger SRT8 ACR, anticipation could be settled at the SEMA show next week, opening November 1. At the very least, some of the features may go on sale as separate items in the future. We’ll keep you updated.