This race between an Underground Racing Ferrari 458 twin-turbo and a Lamborghini Aventador may seem like an easy win for one of them, but it proves quite interesting results. 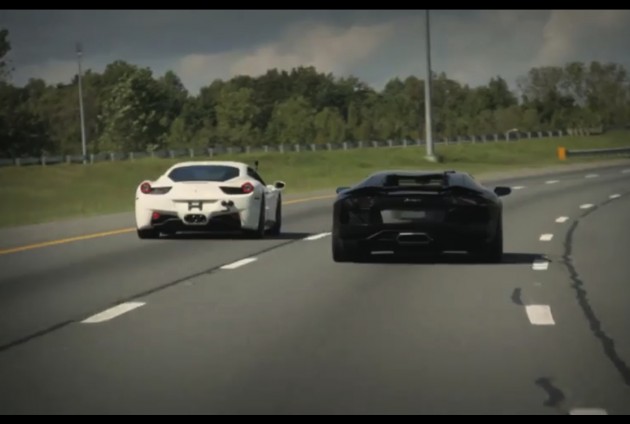 The Underground Racing Ferrari 458 twin-turbo features a 4.5-litre V8 that already outputs 419kW of power before Underground Racing even gets to it. After the installment of two turbochargers, power is taken up to 700hp at the wheels. That’s 522kW at the rear wheels.

In the other corner we have the brand new Lamborghini Aventador. This is Lamborghini’s most powerful model and the current flagship within the Italian marque. Straight from the factory in Bologna, it features an all-new 6.5-litre V12 engine developing 515kW (700PS) of power and 690Nm of torque, at the engine.

We’ll let you see the results for yourself before we discuss it any further. Click play on the video below for the full race. (There is a bit of intro fluff with the film, but it does get going without musical soundtracks.)

The race shows just how quick the factory package is, showing incredible levels of performance. Of course, the Underground Racing Ferrari 458 twin-turbo does take the win, but we have to hand it to Lamborghini for almost keeping up. Even though it didn’t, it showed some serious speed, especially in the second run. And this is a car you can buy straight from the factory.

At the end of the video Underground Racing says it is working on a twin-turbo package for the Lamborghini Aventador. We look forward to providing you with any updates.