TeamVodafone driver Craig Lowndes has won his fourth straight V8 Supercars race at Queensland Raceway after leading from start to finish in the first of two races for the Ipswich 300. 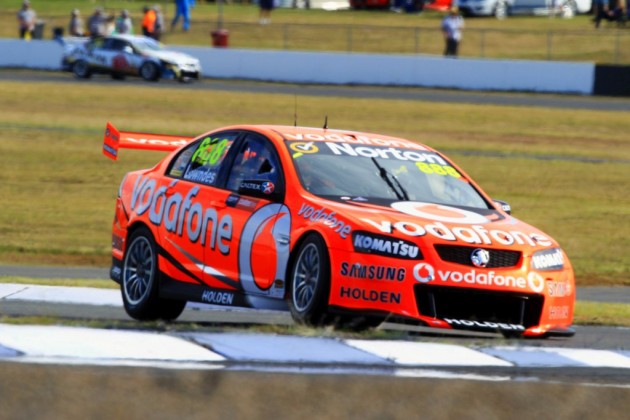 The five-time Bathurst 1000 winner got a perfect start from pole while his teammate Jamie Whincup dropped down to seventh after almost stalling as the lights went green.

The reigning champion came back to finish second however, after opting to pit earlier for soft tyres and going on a charge. By the end of his last stop, Whincup found himself in the podium position.

In what is becoming routine in V8 Supercars in 2012, Ford Performance Racing was the only other team to visit the podium with Mark Winterbottom being not far from Lowndes’s shadow the entire day, cruising home to second.

Brad Jones Racing Holden driver Fabian Coulthard again was the ‘best of the rest’ with a great drive for fourth. Veteran Russell Ingall had his best drive of the year to finish fifth while FPR’s Will Davison kept his championship in tact with a sixth placing.

The race was action-packed, well for the first two laps anyway. Bottle-O Racing Ford driver David Reynolds brought the safety car out after becoming tangled in a mid-pack traffic jam. Garry Rogers Motorsport Holden pilot Michael Caruso also found himself facing the wrong way in the kitty litter after a tyre deflated going around the high-speed turn one. Caruso however put in a stellar drive afterwards to climb back to eighth position.

The V8 Supercars Ipswich 300 continues tomorrow with another qualifying before a 65-lap race.