TeamVodafone driver Craig Lowndes has stretched his Queensland Raceway winning streak to five after taking the clean sweep at the Ipswich circuit. 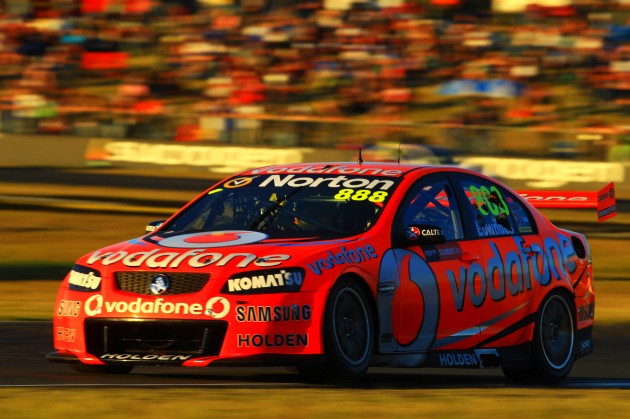 After taking an easy win from pole yesterday, the five-time Bathurst 1000 winner had to do it from the second row after Ford Performance Racing duo Mark Winterbottom and Will Davison filled the front spots.

Lowndes got off to another ripper start but and found himself behind Winterbottom and in no time made his way to the front. Frosty told Channel Seven after the race that despite being not far from Lowndes’s tail the entire race, the Commodore pilot simply “had incredible speed and was always going to win”.

From there, the veteran Holden driver went untouched to win the 65-lap race almost two seconds ahead of his Ford rival. Reigning champion Jamie Whincup cruised home to third about 14 seconds further back.

Davison completed yet another TeamVodafone-FPR top four domination. After starting from pole, Davison said post-race his Falcon’s handling just wasn’t good enough to keep up with his TeamVodafone rivals or his teammate.

In yet another solid ‘best of the rest’ drive, Brad Jones Racing’s Fabian Coulthard finished fifth while Holden veteran Russell Ingall completed his best weekend so far in 2012 with sixth and a new lap record to boot.

Stone Brothers Racing pair Shane van Gisbergen and Tim Slade battled each other home for seventh and eighth respectively. Their teammate Lee Holdsworth wasn’t so lucky, he had to evacuate his car after his clutch caught fire after overusing the third pedal because of a sticking throttle.

The next V8 Supercars race will be on August 24-26 at the newly refurbished Sydney Motorsport Park (formerly Eastern Creek Raceway), the first time the V8s have raced there since 2008.