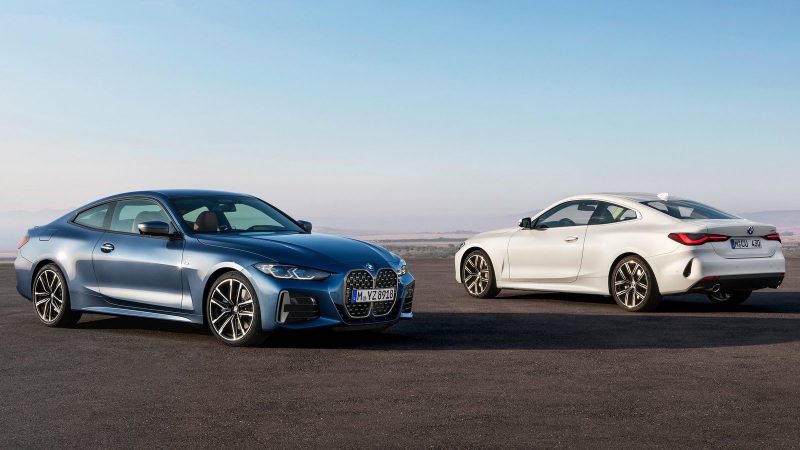 This is it, the all-new G22 2021 BMW 4 Series. And yep, that is the new front end. BMW revealed the new model overnight with a range-topping M440i xDrive variant hitting the scene for the first time. The new model jumps to the CLAR platform, like the latest G20 3 Series, which brings in various dynamics changes. For example, the overall length of 4768mm is 128mm longer than the outgoing model. A width of 1852mm also means it’s 27mm wider, and the wheelbase is stretched 41mm to 2851mm.

Height is increased by 6mm to 1383mm, meaning it is a much lower and wider vehicle overall. The tracks have also increased by 28mm at the front and 18mm at the back, and they are 23mm wider than the G20 3 Series as well for distinct handling characteristics. In fact, the centre of gravity is 21mm lower than the latest 3 Series. Overseas there will also be a 420d, featuring a 2.0-litre turbo-diesel four-cylinder that produces 140kW and 400Nm. It can be had with either rear-wheel drive or all-wheel drive. Acceleration across 0-100km/h comes up in a claimed 7.1 seconds, and 7.4 seconds for the xDrive (slightly heavier, around 65kg). Inside, BMW has applied its latest interior theme infusing its 7.0 operating system into the new-look dash and centre console. It consists of a 12.3-inch digital instrument cluster for the driver and a 10.25-inch media screen atop the dash fascia. Head-up display is standard, and the operating system now supports Android Auto and Apple CarPlay.

BMW Australia has confirmed the new model will go on sale locally in October, with the three petrol variants locked in to launch. Prices and specs for Australia will be announced closer to its arrival.