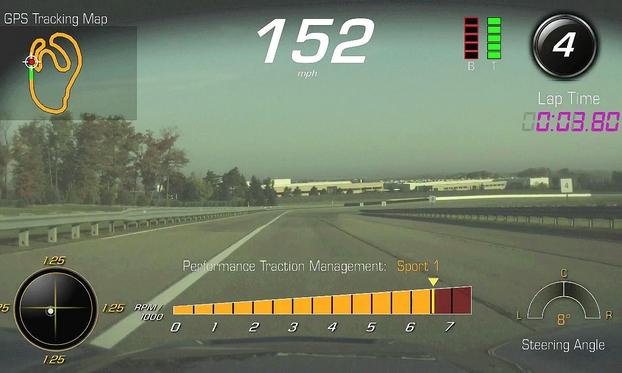 Chevrolet, and potentially Holden in the future, will soon offer a new high-tech performance data recorder for its performance vehicles. The advanced tech will be capable of video recording driving experiences, such as on the race track, and taking lap times and quarter-mile times.

According to Chevrolet the technology will be an industry-first, giving enthusiasts a chance to fine tune and test various setups and lap times on the circuit. It will debut on the 2015 Corvette Stingray. Tadge Juechter, Corvette chief engineer, spoke about the technology in a statement, saying,

“The Performance Data Recorder combines the ability to record and share drive videos with the power of a professional-level motorsports telemetry system.

“Drivers can easily record and share their experiences driving down the Tail of the Dragon or lapping Road Atlanta. In addition, with the included telemetry software, users can analyse their laps in incredible detail and find opportunities to improve their driving and lap times.”

All of the major components of the system are integrated into the Corvette’s interior, including a high-definition camera mounted above the windscreen, a microphone, and a self-contained GPS telemetry recorder which monitors the engine, brake pedal, gear selection and steering angle.

The system, which has been developed with help from Cosworth, is able to store all recordings on an SD card mounted in the glovebox, with an 8GB card capable of storing around 200 minutes worth of driving.

Although the system will initially become available for the Corvette, it could potentially be released on other performance models such as the Camaro.

With Holden closing down Australian manufacturing and turning to importing GM vehicles, the technology could eventually find its way to Australia.