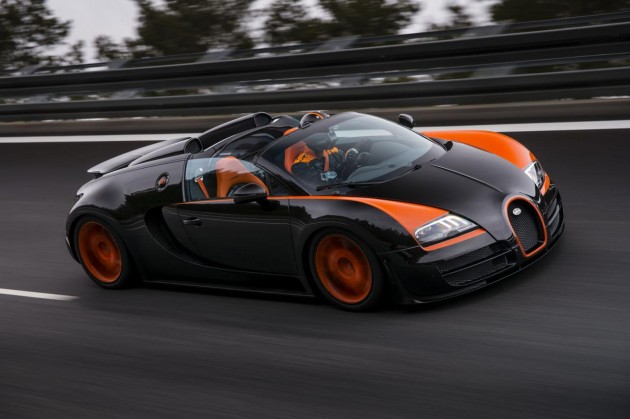 With one of the longest vehicle names in history, the Vitesse WRC is the mysterious vehicle that Bugatti will unveil at the 2013 Shanghai Motor Show in just a couple of weeks. It can be instantly distinguished via the trademark Super Sport black/carbon fibre and orange colour scheme.

Like the Super Sport coupe, the Vitesse comes with an 8.0-litre W16 quad-turbo engine producing 882kW and 1500Nm. As for its record breaking top speed, the Vitesse has hit 408.84km/h in the hands of Chinese racing driver Anthony Liu. Liu recently spoke about the speed runs, saying,

“This was a very exciting moment. In our training sessions we exceeded 400km/h but the fact that I could surpass this unbelievable speed once again and even higher has made me very proud.

“The car is even at such high speeds incredibly comfortable and stable. With an open top, you can really experience the sound of the engine and yet even at higher speeds I did not get compromised by the wind at all.” 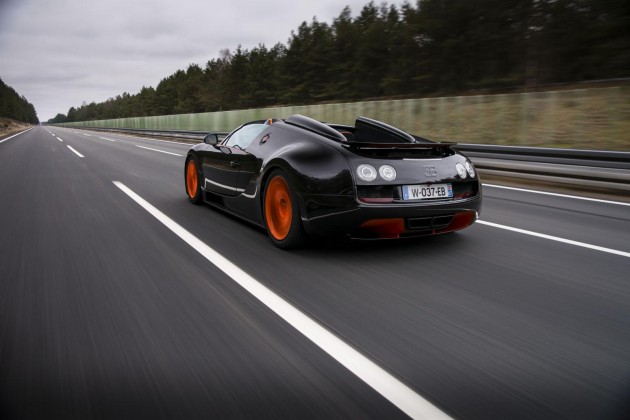 “When we introduced the Vitesse, we established the top speed for open-top driving to be 375km/h. Still, we could not let go of the idea of reaching the 400km/h mark with this car as well.

“The fact that we have succeeded in reaching 408.84km/h is a thrill for me, and it reaffirms once again that Bugatti is the leader when it comes to technology in the international automotive industry.”

Just eight examples of the Vitesse WRC edition will hit international markets. Prices will start at an eye-opening 1.99 million euros (approximately AU$2.47 million). Like the regular Veyron, the new Vitesse is not eligible to go on sale in Australia.