Kia Australia has announced it will be introducing the hot new Kia cee’d GT and pro_cee’d GT into the local market. The cars, which have only just been unveiled, are the company’s first ever attempt at the hot hatch market. 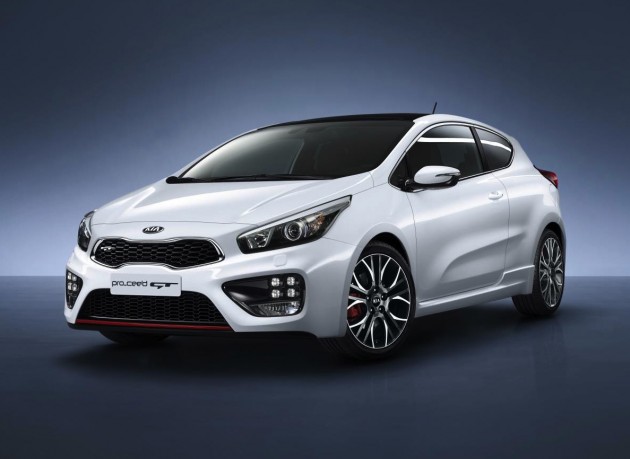 Differentiating the two is fairly simple. The cee_d GT is the five-door hatch, while the pro_cee’d is the sporty three-door hatch. The roofline in the three-door is also lowered for a more sporty look. Both the GT versions will join the regular pro_cee’d which will go on sale in March this year.

Power for the GT versions comes from a 1.6-litre turbocharged four-cylinder producing 150kW and 265Nm, capable of 0-100km/h in 7.7 seconds. The engine features GDI direct injection, beefed up internals compared with the naturally aspirated version, with a twin-scroll turbo providing the pressure.

As you would expect, the announcement is very exciting for not only Kia Australia, but also for hot hatch enthusiasts around the country. Tony Barlow, Kia Motors Australia chief operating officer, recently said,

“It is incredibly exciting news for us. This is a whole new level of performance for Kia Australia and the fact that it is wrapped in a sensational package of style and safety is icing on the cake.”

For those who haven’t seen the car before, it’s quite an impressive looking hatch, with modern design characteristics matched with a sporty low profile stance.

Highlights include sports suspension and brakes, 18-inch alloy wheels, a neat bodykit with red details around the front end, lots of black and darkened features including the fog light bezels and headlights, as well as a sporty interior.

The local arm said in a recent announcement for the regular non-turbo pro_cee’d that the “new pro_cee’d will be joined in the middle of the year by the Kia pro_cee’d GT and cee’d GT, the brand’s most performance-focused models so far”.

Prices and full local specifications are yet to be finalised.