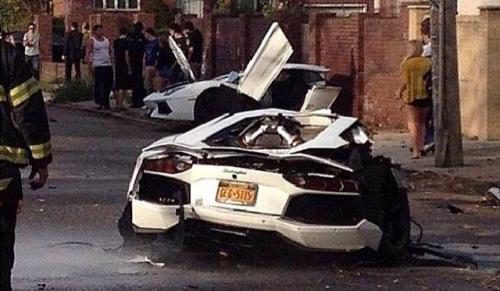 A serious Lamborghini Aventador crash in New York has been caught on CCTV cameras, showing the Italian exotic being torn in half after colliding with a power pole.

Just taking a look at the state of this Lamborghini Aventador after the crash, you could easily assume the driver was doing some pretty serious speed at the time of impact; the car is literally torn in half.

Although it might look like it happen on an autobahn while doing 200km/h-plus, the incident was caught on CCTV security footage, showing the driver of the Aventador wasn’t necessarily at fault.

As you can see, the Lambo is driving along a regular street – perhaps speeding just a little – when a black sedan appears to pull in front of it to enter a driveway or side street. The black car completely cuts off the Lamborghini, which then veers off the road and clips a power pole.

After that, the Aventador is ripped in half, with the cabin section sent off sliding down the road while the engine section remains near the pole.

Miraculously, the driver is said to have suffered no serious injuries. We hope the other driver has a good insurance policy.