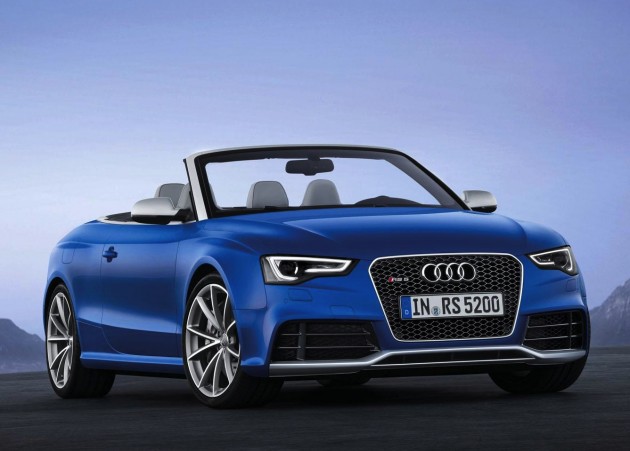 The Audi RS 5 (full review here), is the highest performance version of the Audi A5. It features various supped up highlights, such as ‘RS’ sports suspension and brakes, a focused interior with bucket seats, and various driving modes to quench your driving thirsts.

Up front, like the coupe version, the RS 5 Cabriolet comes with a high revving 4.2-lite naturally aspirated V8 engine producing 331kW of power and 430Nm of torque. It propels the stunning machine from 0-100km/h in around 4.9 seconds.

The rapid acceleration is partly thanks to the quattro all-wheel drive system and quick-shifting seven-speed dual-clutch auto transmission. 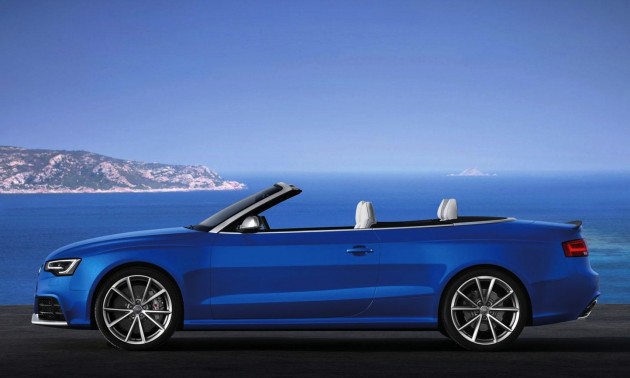 Being a convertible, Audi engineers have had to make some reinforcements to some aspects of the chassis and body structure. Fortunately, some weight reduction measures have also been implemented to compensate for the added weight, such as aluminium front guards.

In the back, boot space is compromised slightly due to the electric fold roof. Up to 60 litres is used up, which is not that much considering a total volume of 380 litres is on offer. But anyway, who cares when you’re driving a car that looks and goes this good, right?

Other interesting highlights include a new set of LED lights encircling the headlights, a new rear diffuser with a honeycomb divider, and a neat carbon fibre lip spoiler at the back (as opposed to the automatic pop-up spoiler on the coupe version).

Audi Australia is yet to confirm if the RS 5 Cabriolet will join the local lineup. If it does decide to introduce it, it’s likely to arrive during the second-half of this year, after the international launch in the second quarter.

The Detroit Auto Show, starting January 14, will be the first chance the public will get a glimpse of the beast.