Audi has broken the lap record at the Nurburgring, for a production electric vehicle, in the Audi R8 e-tron with a time of 8:09.99. The R8 was driven by racing driver Markus Winkelhock. 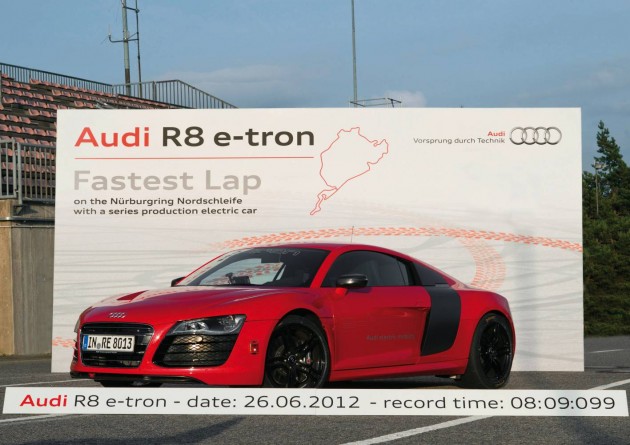 Although the R8 e-tron isn’t quite a production car yet, Audi says the all-electric powertrain used to break the record lap will be featured in the showroom model, set to launch towards the end of this year.

Power comes from a 49kWh lithium-ion battery system feeding current into two motors with 280kW and 820Nm. Audi says that up to 4900Nm of torque can be distributed to the rear wheels during standing start acceleration, with 0-100km/h possible in 4.6 seconds.

The Nurburgring lap time might prove the R8 e-tron has excellent power and acceleration, however, to achieve a time like this the vehicle also needs to handle very well, especially under varying loads. Audi has maintained the R8’s dynamics by mounting the electric system in a T-shape under the floor and behind the cabin, allowing for a low centre of gravity.

The R8 e-tron is also relatively lightweight, for an EV, thanks to the extensive use of carbon fibre in its construction. It features a kerb weight of 1780kg. The weight is up by only 155kg compared with the R8 V10 (auto), which has previously set a Nurburgring lap time of 7:44.

“Of course, the R8 e-tron is a production car, not a racing car with the assistance of aerodynamics. But with its low center of gravity and rear biased weight distribution, it brings with it a lot of sporty qualities.

“The torque with which the electric motors propel the car uphill beats everything that I know – even if they make hardly any noise in the process, which at the start was really a completely new experience for me. In places where I really need traction, the torque vectoring – the displacement of the torque between the powered wheels – really helps me.”

The R8 e-tron offers a full charge range of around 215km, which is not bad for an all-electric vehicle – the new Nissan LEAF hatch has a range of 170km.