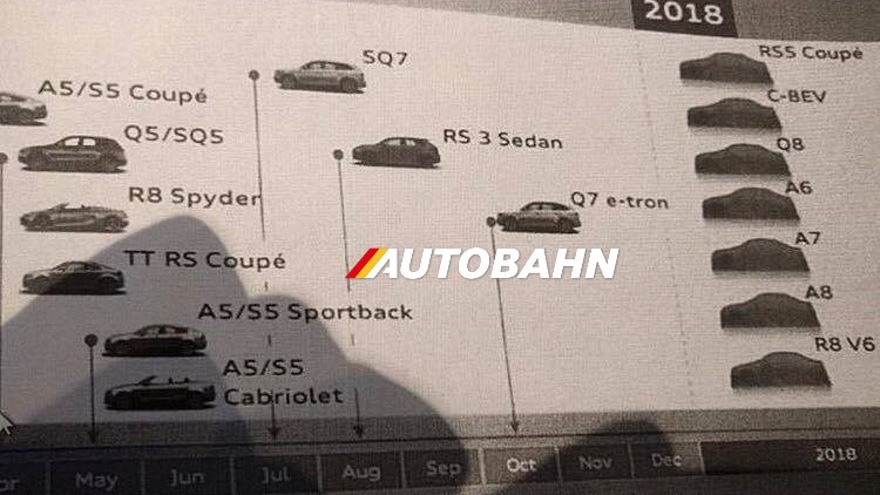 Some details regarding Audi’s near-future lineup appear to have been leaked, with an apparent official timeline confirming the RS 3 sedan and a new entry version of the R8 supercar. 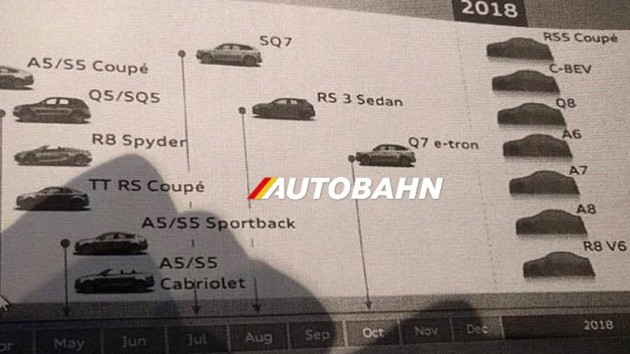 It all stems from an autobahn.eu report, which claims to have secured an official timeline for future products. The biggest news that we can see is confirmation of an “R8 V6”. This would be a big change from the usual R8 lineup which consists of only V8 and V10 engines.

Of course, there is the chance Audi will switch to a high-powered V6 motor in the future as part of typical downsizing trends in the hunt for improved economy. It could come in as a replacement for the V8, offering similar or even greater outputs.

The rest of the timeline does seem to match expected new models known to be in the pipeline, including an SQ7 performance SUV, and new TT RS performance coupe. There’s also the RS 3 sedan that recently popped up in the news.

Audi has already confirmed it will be launching the all-new Q5 and SQ5 next year, introducing a fresh design and new underpinnings. The all-new A5 and S5 are also scheduled for debut next year, adopting the latest A4’s lighter and larger platform.

Later down the track will be the fully electric SUV known as the Q6, shown here as the C-BEV (battery electric vehicle), along with the refreshed A6/A7 and A8 large luxury sedan. The timeline also confirms a “Q8” large luxury SUV for 2018.