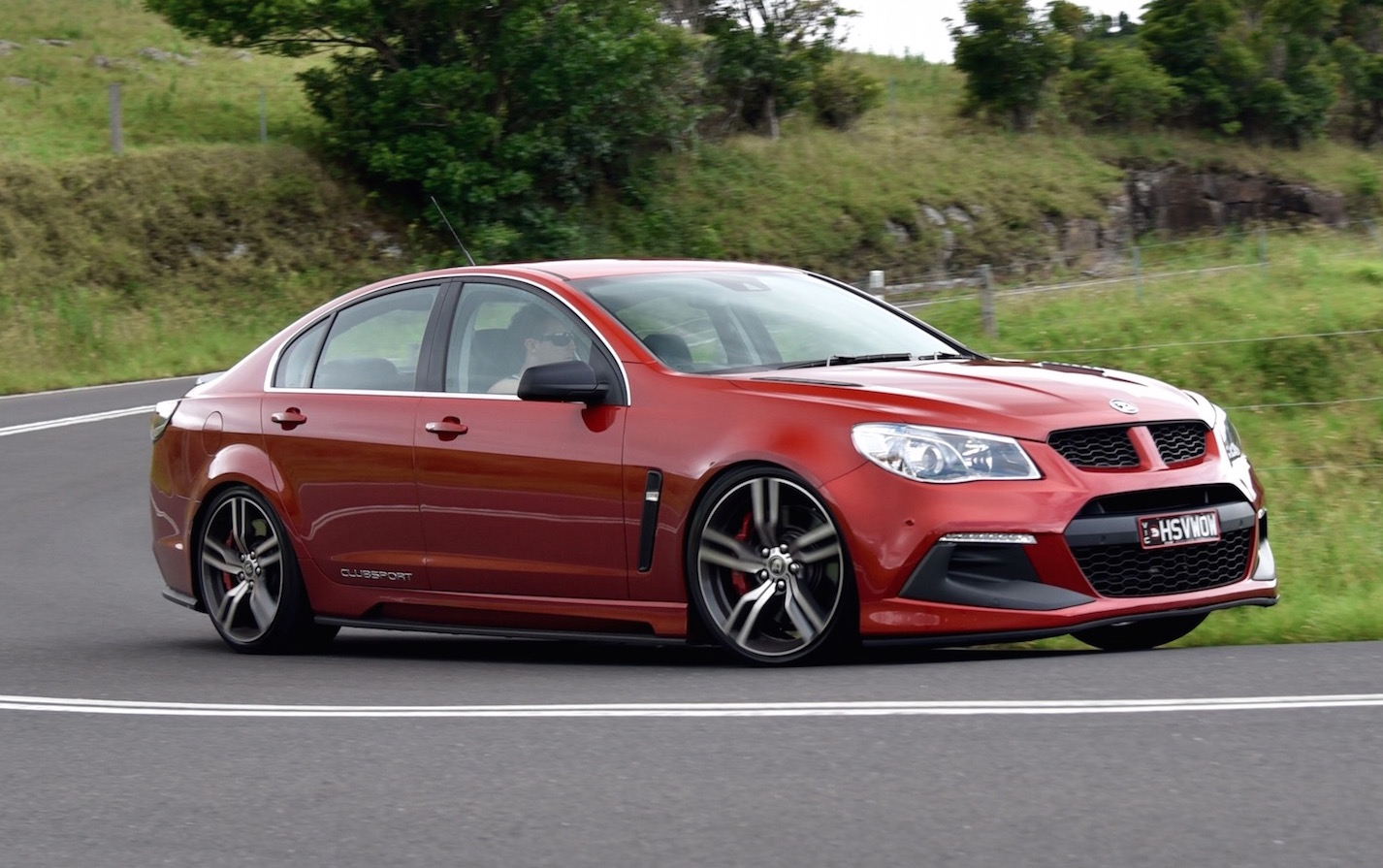 It started life as a humble Aussie icon. Now, the HSV Clubsport sits in the market as one of the most powerful production sedans in the world. Isn’t it a shame the MY2016 is going to be the last model ever? 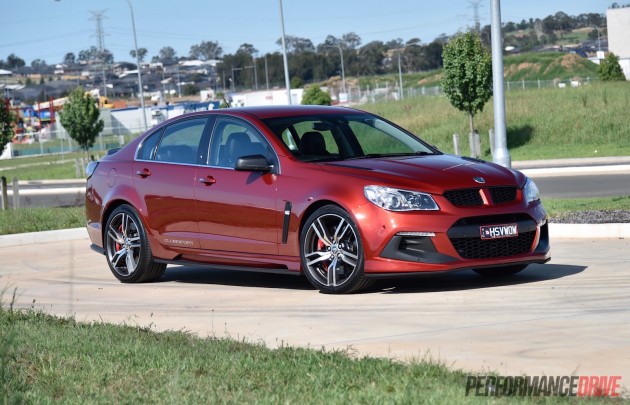 Yep, as you’ve probably heard, Holden Australia is closing down local manufacturing of its vehicles by 2017. This means there will be no more Commodore. And without a Commodore, Holden Special Vehicles will have nowhere to go with the Clubsport unless it attaches the nameplate to some crummy European thing – let’s hope that’s not the case.

As a way of giving the Clubsport a proper send-off that it deserves, HSV has implanted the Chevrolet-sourced LSA engine into the engine bay. It’s not quite at the ballistic caliber of the HSV GTS’s LSA, but it does churn out 400kW and 671Nm. This easily places it inside the top 10 most powerful sedans offered in Australia, right up there with the top AMG Merc V8s and BMW M cars.

Here we’re testing the Clubsport R8 model with the optional six-speed automatic transmission – there is no more non-R8 version of the Clubsport. Prices start at $80,990, plus $2500 for the automatic (excluding on-roads). The price has jumped quite a bit from the naturally aspirated, 340kW MY15 version, $7700 to be exact (auto), but as far as we – and probably you – are concerned, it’s still a bargain. As before, it is available in sedan and wagon guise. 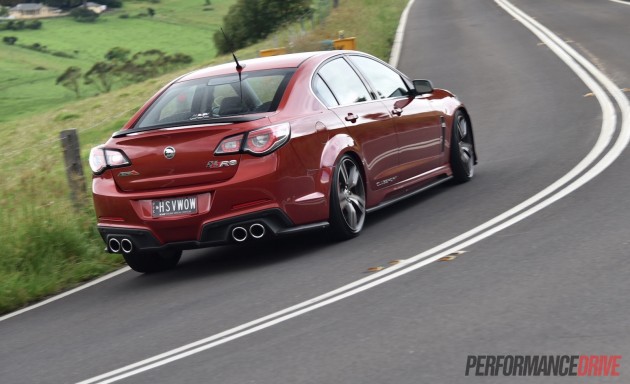 The VF Commodore is a brilliant vehicle for carrying five adult passengers around in comfort. The Gen-F2 HSV Clubsport is no different. Unfortunately, there aren’t any major upgrades for the MY16 interior. Fortunately, it’s already a pretty darn good setting in here as it is.

Four of the five passengers are treated to their own leather/Alcantara sports seats, with the front showcasing some of the best chairs we’ve ever seen in a sports sedan. They show the world bucket seats needn’t be ridiculously firm and rigid to offer proper hip-hugging support. The chunky HSV units are fabulous, featuring big side bolsters that really hold you in place in the sharpest of corners, with a nice soft bottom cushion that won’t pulverise your coccyx after a long drive.

There are two big cup holders in the front centre console, bottle holders in all doors for even the manliest of Gatorades, and a big console box in the middle for all of those bits and pieces that tend to accumulate over time. This is no doubt a vehicle you could live with every day in terms of sheer cabin size and overall practicality. Even entering and exiting the cabin doesn’t require you to fold yourself down to a more compact size, like human origami, despite being a 400kW super-sports car. 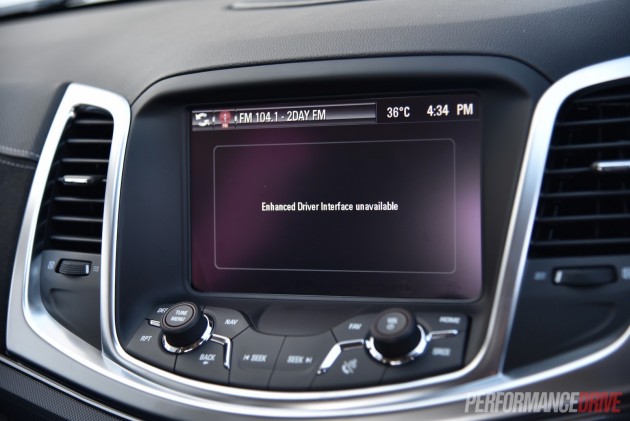 Most of the on-board media and functions are controlled through the MyLink touch-screen interface, which incorporates sat-nav, Pandora and Stitcher music apps, and mobile phone connectivity functions. This test vehicle didn’t come with the “Enhanced Driver Interface” (EDI) app, which we’ve always assumed was a standard feature on HSV models – it’s actually a $1095 option. We’re not sure why HSV makes it an option. On a vehicle of this pedigree and nature you’d expect it to come with performance readouts and such as standard, like the rivals offer.

Most of the MY16 updates are found on the outside. The new model comes with a more aggressive and more modern front fascia with a string of LEDs in the corners, black bonnet vents, a revised rear diffuser, and some very cool black side skirts to give it a real hugged-down racecar look. HSV has also introduced some freshly-designed 20-inch alloy wheels, measuring 8.5 inches wide on the front and 9.5 inches wide on the back.

Mechanically, the new Clubsport gets the 6.2-litre supercharged V8 engine as mentioned. It uses an Eaton four-lobe supercharger running 9psi, working with a water-to-air intercooler. From there, grunt is sent through the 6L90E six-speed “heavy duty” automatic and into a 9.9-inch differential with a limited-slip centre, and upgraded prop and drive shafts to handle the enormous LSA power. 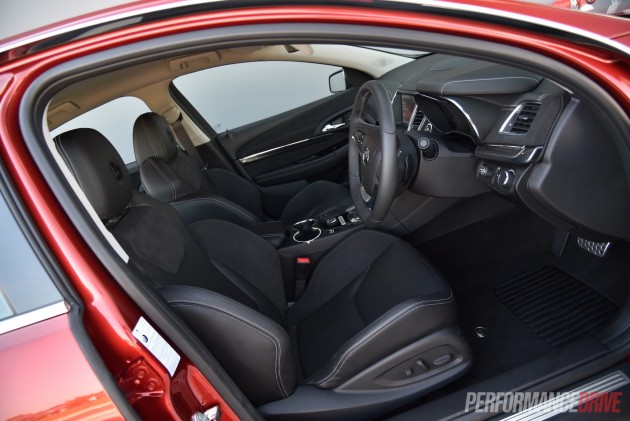 The best part about Aussie muscle cars is the fact they are so practical. When you start up this beast there’s an almighty rumble as the bi-modal exhaust opens up and lets out a deep and rich belch from the V8’s firing sequence. But when you start to move off and step above about 1500rpm, the exhaust closes off, automatically, resulting in a quiet and pleasant cruiser. You could take your grandmother to church in this car and she wouldn’t feel out of place.

Bi-modal exhausts are definitely an awesome idea… when there is a switch allowing the user to operate it. In the HSV, and new Commodore SS for that matter, it’s all controlled automatically. We actually prefer what Holden has done with the exhaust on the latest LS3-powered Commodores. It gives off more of a bark, even when the bi-modal system is in its closed position, compared with this HSV setup. The transition is also less obvious from open to closed in the Commodore. Take a look at the video below and you’ll see what we mean. There’s a distinct mechanical flick as the muffler opens on the HSV, and the noise difference is very obvious. Enough of the sound though. What does 400kW feel like?

It allows the car to get up to speed so effortlessly – you won’t believe it at first. If you’ve got plenty of tolerance left on your licence be prepared for most of it to be soaked up after a short time living with the Clubsport. You only need to breathe on the throttle to send the speedo spiralling. Specifically, this test vehicle performed 0-100km/h in just 4.82 seconds, and covered the quarter mile in 12.97 seconds. These are some serious times, especially for a large sedan.

Full throttle presents startling acceleration and forward momentum. The six-speed auto does require a moment before downshifting (and upshifting), but once it’s in gear, it relentlessly soars towards the horizon, roaring, angrily, with the rear tyres squirming for grip. If you’re brave enough to keep it above 4000rpm, where the exhaust remains open, the driving experience is unreal. The LSA is a beaut engine. 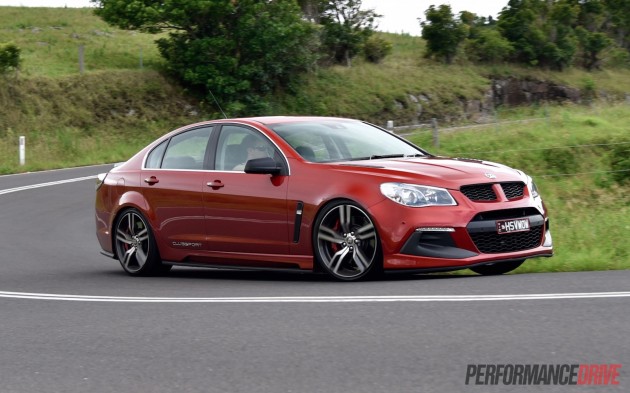 However, the automatic transmission option doesn’t feel like it is making the most of the LSA. There’s a noticeable delay between shifts as mentioned, and the gearing is very long, so there’s very little snappy, squirt-like punch to it. Instead, it behaves like a big axe being hurtled at a stump, building speed rapidly and progressively, as opposed to a tomahawk hacking away at a quicker tempo. In this sense, the manual would be the more appealing option, and we predict it would record faster acceleration times. We tested the previous 340kW Clubsport across 0-100km/h, in manual guise, and it recorded 4.8 seconds. We didn’t test the quarter mile but we suspect even in manual form the old 340kW model wouldn’t be able to match this LSA-equipped version. Top end power is just too insane for anything less to keep up.

HSV has made some revisions to the suspension for the LSA model, installing stiffer springs and firmer dampers. This means there is less body and even more precision and control through the corners. There weren’t many complaints from the previous setup but now it’s fine-tuned so it’s slightly better. It feels a touch more agile and it can be thrown around a bit, offering nice controlled drifts or powerslides if that’s your thing. There’s no doubt, it remains the most dynamic Australian sedan ever made.

With giant AP Racing brakes front and rear, the Clubsport recorded the best 100-0km/h braking test result we’ve seen so far. It stopped in just 34.8 metres and in just 2.69 seconds. It really does stop on a dime. This amplifies the car’s overall cross country performance and ability because it means you can easily set up the car for corner entry and trust the brakes for perfect placement, no matter what speed. The new paddle shifters also heighten the driving experience. The only thing left now is to some how maintain those licence points. 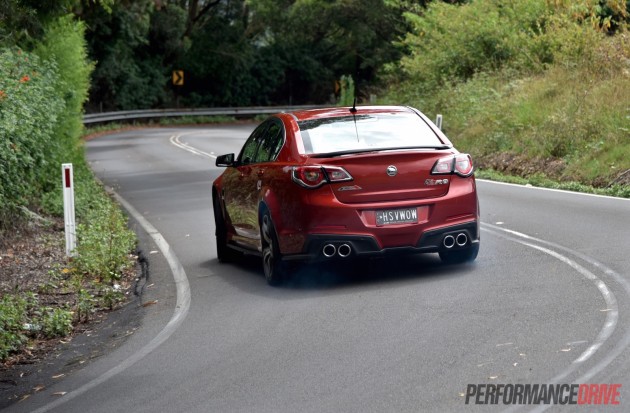 There’s no point in trying to come up with a good-or-bad verdict for this. It’s an awesome car and it is the best Clubsport there has ever been; it’s the fastest and most powerful, the most advanced, arguably the best-looking, and the best handling, and that’s an end to it. If you’ve been thinking about it and you can afford it, now is the time to buy. If you can’t afford it, the regular LS3 Commodore SS is also an outstanding backup option.

PROS:
– Immense in-gear acceleration, 12-second 1/4 mile
– Handling, composure, and grip (even with 400kW)
– Best seats in the business
– Looks hotter than ever
– Space/practicality