Anti-terrorism campaigns are sweeping Australia at the moment, with special police units conducting various raids across the east coast of the country. As part of counter-terrorism in America, the Texas Transportation Institute (TTI) has come up with a barrier to shield against a speeding truck. 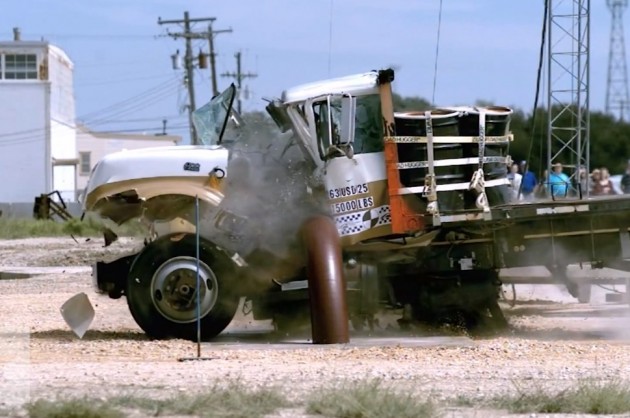 The project was put together via a contract between the US State Department and the Texas Transport Institution. The plan was to come up with a device that would stop a speeding truck from penetrating through into embassies and boarders.

As a result, one of the successful perimeter security devices was a 7.3-metre wide steel hoop that’s buried 46cm in the ground with concrete. It is designed to prevent a truck tray from making it one metre beyond a certain point, in this case, the blue pole.

In the video below you can see just how successful it is. Violent, but successful. As the truck comes in at 80km/h, the barrier barely flinches. It effectively catches the chassis of the truck, sandwiching the cabin in the process.

Sitting on the tray of the truck are some black barrels which are put there to double as explosives. These get jolted around a bit, but the barrier manages to secure the chassis and cabin before it reaches the tray contents.

Dean Alberson from TTI’s Crashworthy Structures Program said in a Texas Tribune report that “the focus is on keeping a terrorist from breaching the barrier”, and that “the ability of a driver to survive such a crash is not a primary concern”, obviously.

Click play on the video below to take a look. It’s always interesting to watch carnage in slow-motion, but it’s even more interesting to see how well it captures the truck.