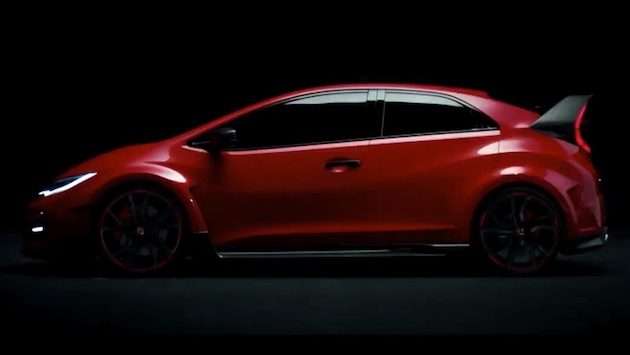 With the blue Honda Civic Type R concept set to debut at this week’s 2014 Paris Motor Show, Honda has kept the hype charging and released a video that confirms details as well as its aspirations for the highly-anticipated 2015 hatch.

This will be the fourth generation Civic Type R to come from Honda, and is set to be the fastest Type R ever made. The new car will face rivals such as the Renault Magane R.S. 275, Ford Focus ST, and Volkswagen Golf R. In the video, Suehiro Hasshi, Type R project leader, explains:

“The new Civic Type R is unrivalled in its performance when compared to other Type Rs, such as the NSX, Integra and Accord. It has become the best of all.”

Towards the end of the short video Hasshi says the new Civic Type R is “truly a racing car”. And that Honda’s goal of building a car that could claim the record of the fastest front-wheel drive at the Nurburgring is “already in sight”.

Earlier this year, Renault took the new Megane R.S. 275 Trophy-R to the Nurburgring and set a record time of 7:54.36, reclaiming the title of fastest front-wheel drive around the German circuit from the SEAT Leon Cupra 280, which did it in 7:58.4. Honda will no doubt be pushing very hard in the coming months to beat the Megane’s record lap.

The new hot hatch will be the first ever Type R to combine a turbo engine with VTEC technology. The 2.0-litre i-VTEC engine will redline at 7000rpm, and produce a power output of over 206kW. Another first for Honda is the introduction of a ‘plusR’ button that when pressed enables increased performance. Honda has also revealed the 2015 Civic Type R will come exclusively with a six-speed manual, with no plans to introduce an automatic transmission.

Honda reinstates many times during the video that the new Type R is unlike anything that has come before. Let’s hope the car lives up to the hype when it’s released next year. We certainly can’t wait to get behind the wheel.