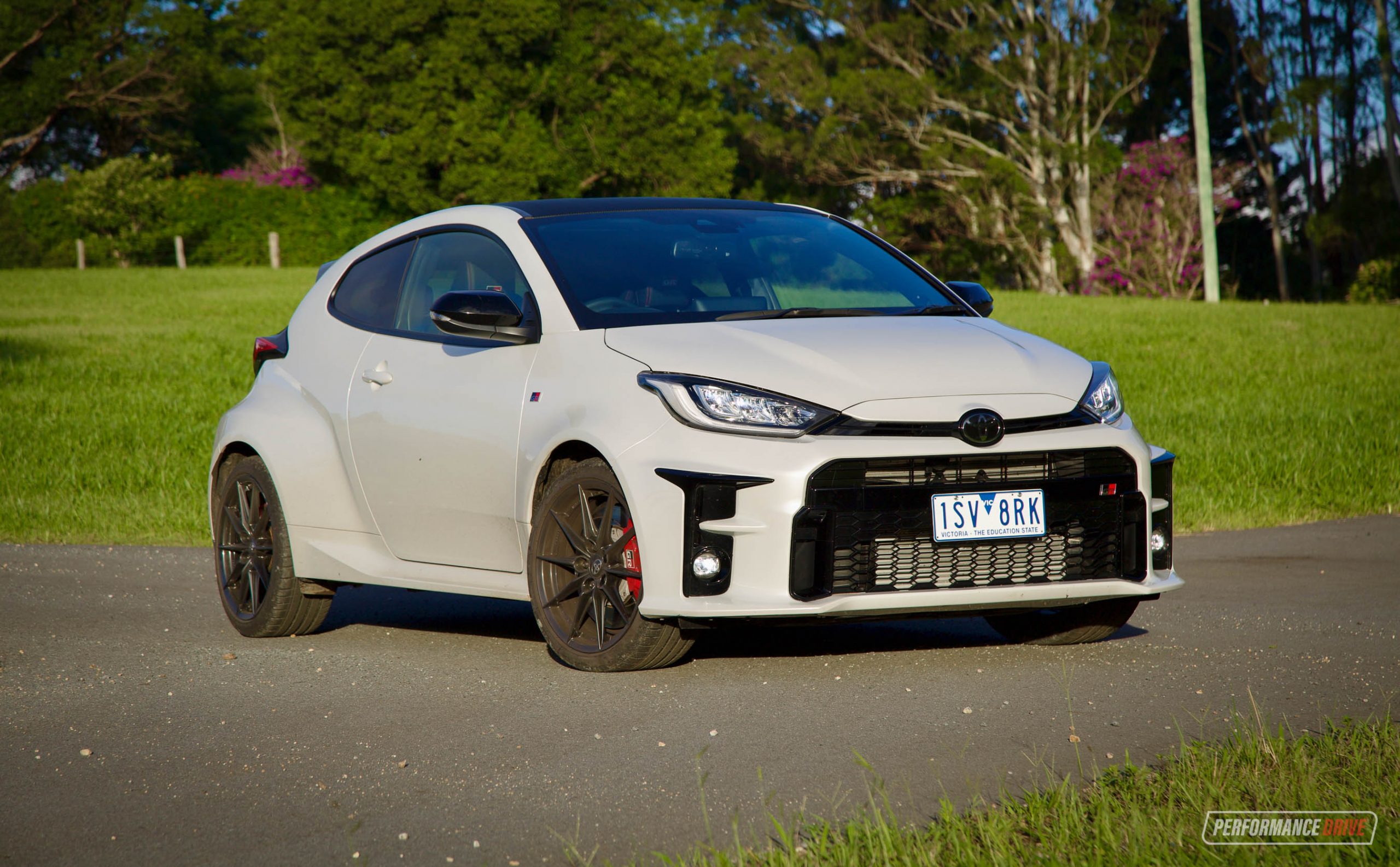 While the past decade has been relatively quiet for Toyota’s performance vehicle lineup, the GR Yaris has fast become an instant classic. Does the Rallye edition prove the Japanese company also has a strong appetite for the hardcore end of the market? 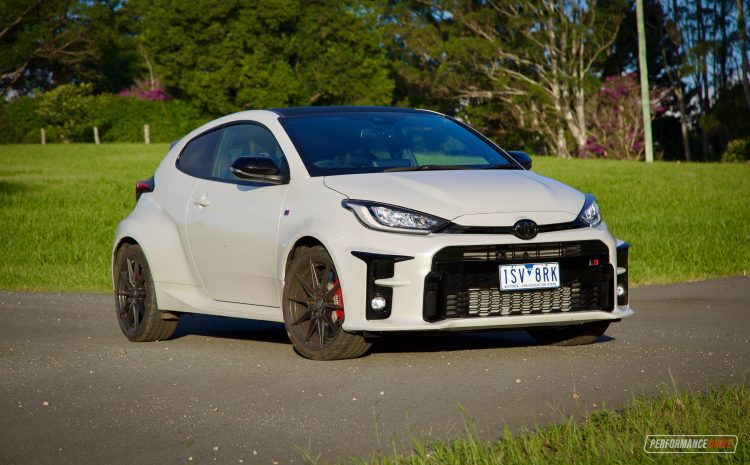 The introduction of the GR Yaris nameplate has been met with almost immediate cult status, with prices jumping and waitlists growing as word gets out on just how impressive the package is.

Our review car here, the Yaris GR Rallye, is a limited-edition variant of the most hardcore Yaris you’ll find on the road, and comes packed with track-ready equipment. It does, however, command a pretty beefy price premium over the standard model. Prices start from $49,500 for the regular version, and from $54,500 for this Rallye edition. Are the upgrades are worth it?

* Figures based on 2021 model as tested by PerformanceDrive on the day. Factory claims may be different 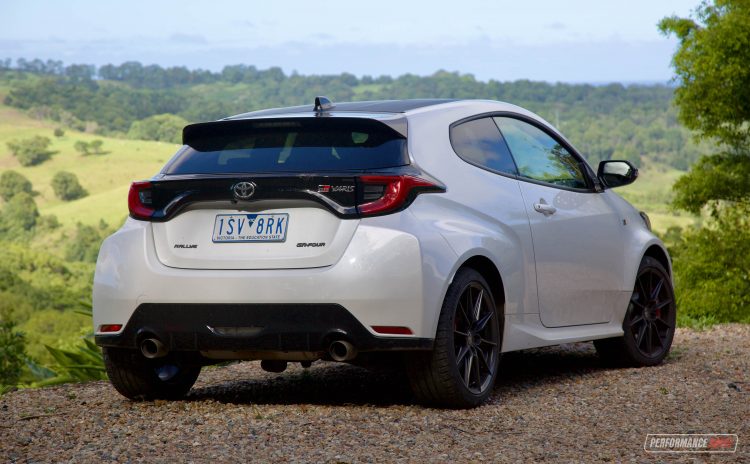 While it doesn’t necessarily shout about it, the GR Yaris receives some pretty aggressive styling touches. Unless you know what to look for, though, it flies fairly well under the radar as a stretched-out version of your typical Yaris, albeit with a shouty front grille.

Inside, the cabin receives some sporty touches of suede for the heated sport seats and the door surrounds, accompanied by a chunky leather-wrapped steering wheel. 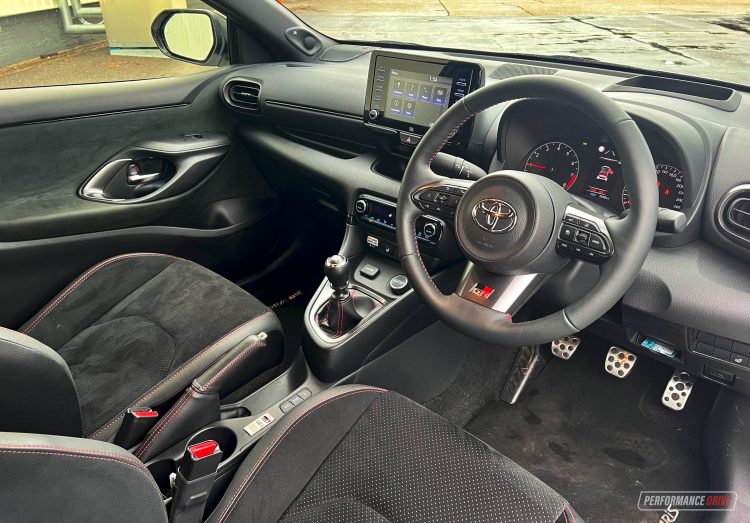 The seats offer some significant side bolstering to hold you in place, and while a lower seating position would be welcomed, it does at least accommodate shorter drivers without a problem.

For all its rally-bred underpinnings, the dashboard retains a straightforward and user-friendly design familiar to many of Toyota’s latest road cars, although the infotainment system is quite the let-down for a car at this price point. We might normally have a gripe over something like this, but in the context of the vehicle that the GR is, we’d be happy with a piece of cardboard as the MMI unit. 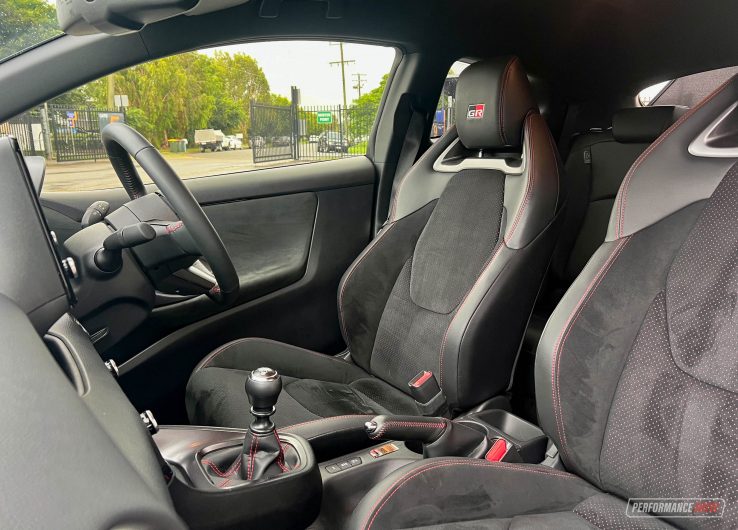 Obviously, the GR is designed as a two-seater, but we’ve checked and it is possible to squeeze your mates into the second row if they’re absolutely desperate for a lift.

For family duties, there’s a pair of ISOFIX anchors for child seats, although it’s a tight squeeze to accommodate a large baby seat, while boot space is capped at a compact 141L.

Another negative real-world concern are the long coupe doors in tight car parks, as well as the complete lack of rearward visibility. The reality of these gripes, though, is that they’re completely irrelevant when you consider the Rallye’s overall design brief. 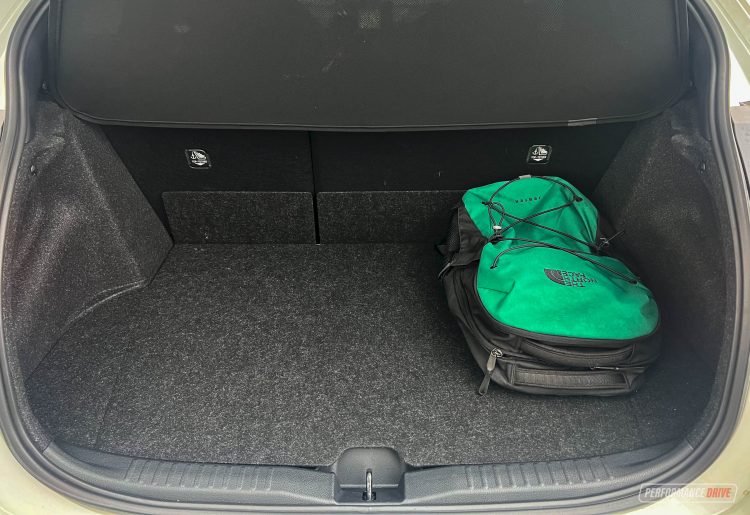 Headlining the driving experience is, as you can imagine, that incredible little engine. In the Rallye, it’s unchanged from the standard unit, meaning there’s 200kW of power and 370Nm on tap from the 1.6-litre three-cylinder turbo.

The engine is absolutely intoxicating. It remains subdued while bumbling around town, allowing you to simply ride a wave of torque between shifts, or while going absolutely feral when the mood strikes. A potential problem is that the mood tends to strike more often than your demerit points might accomodate. 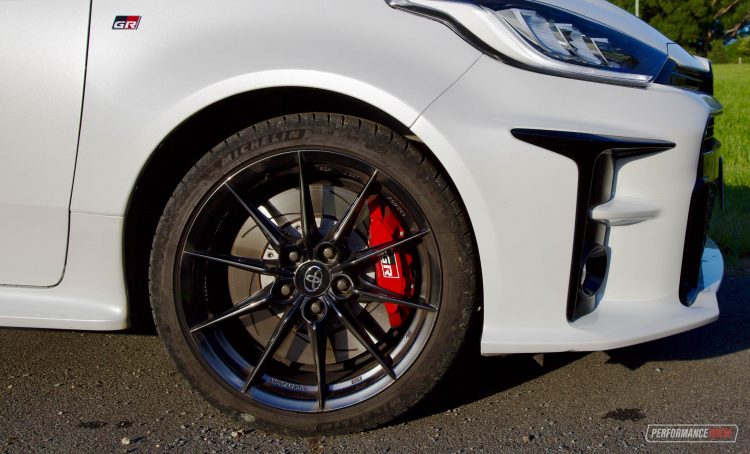 Get that turbo spooled up above the 4000rpm mark and the GR slingshots you straight to the redline without running out of any puff. Link up second gear with a flat foot and the acceleration is nothing short of incredible, punching far above its weight – and price tag.

While the power plant remains the same, it doesn’t take long behind the wheel to realise that the GR Rallye unlocks even more potential of the platform. The Rallye-specific track-tuned suspension includes a stiffer anti-roll bar and springs for the front MacPherson strut setup, giving it one of the most capable front axles you’ll find in a hot hatch. 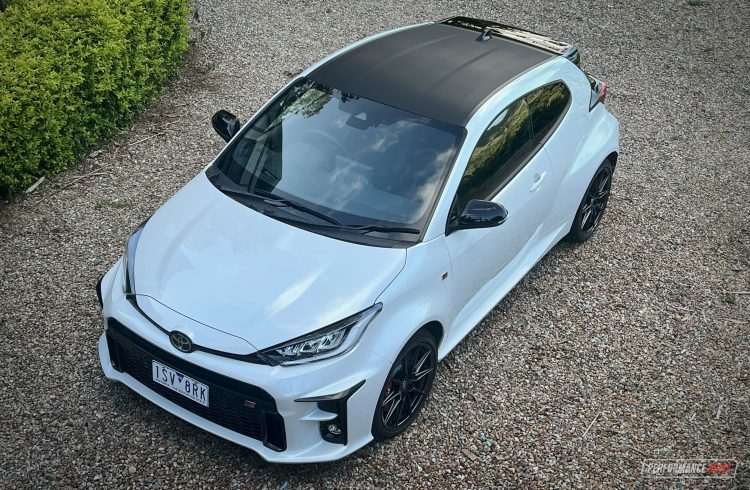 The adjustable all-wheel drive platform offers a 50-50, 60-40 and 70-30 power split between the front and rear that gives it a unique set of personalities. It allows you to channel your inner rally-star for any given stretch of corners.

You can throw caution to the wind and enter a corner with excessive speed, and somehow the front axle immediately bites the ground. Mid-corner, it’s best to be patient with the throttle and wait for mild understeer to resolve. Or, you can get back on the throttle early if you take a more aggressive line and utilise the limited-slip differential. 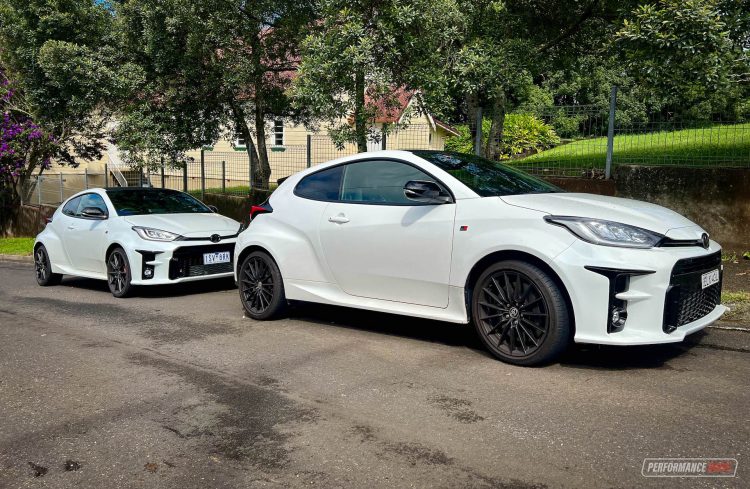 The brakes provide an immense amount of stopping power and handle some serious punishment without fade. During our tests we clocked 100-0km/h in 37 metres. On repeated attempts.

While the GR Yaris is more than capable of misbehaving, with so much grip on hand you have to push the envelope remarkably hard to reach this point. Thankfully, there’s a reassuring amount of feedback before you reach that point. That’s especially handy as you might otherwise experience sudden shocks with such a short wheelbase.

The steering is perfectly weighted around town, sturdy in the hands from takeoff and progressively gains weight as you pick up speed. As you push, the steering rack gives you more than enough feedback to know if, and when, the rear is about to misbehave. 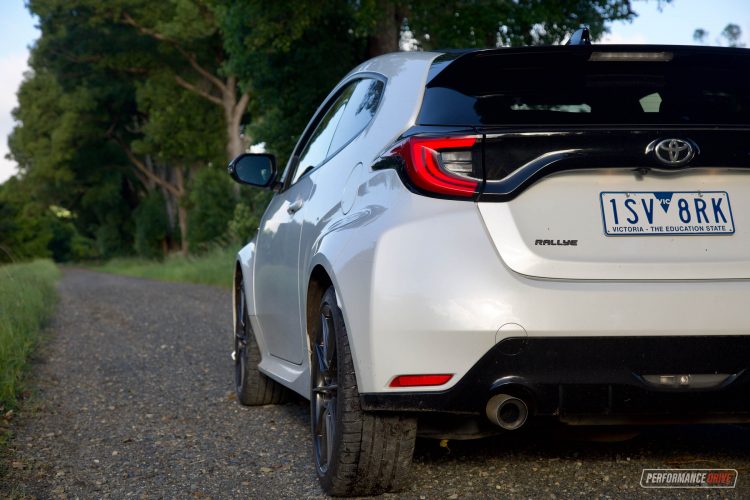 For all its race-ready gear, the GR Rallye feels remarkably tough on rough road surfaces. Out in the country, the GR eats bumps in an impressive manner for any car, let alone a fine-tuned track car, and feels as though it could copp a regular beating for those commuting in the country.

Pound-for-pound, the Yaris GR is one of the most entertaining cars we’ve driven in recent years. The only problem with something so capable is that, to truly experience and appreciate it, you’ll need to get yourself some track time.

The upgraded tyres and the addition of limited-slip differentials and stiffer suspension are the perfect basis for anyone looking to get into motorsport, whether it’s club tarmac sprints or proper off-road rally events. As a result, it’s hard not to recommend spending the extra money for the Rallye. But if you simply want a fast and practical super hatch, the regular version is more than capable of sweeping you off your feet.

PROS:
– Unrelenting three-cylinder turbo
– Front axle grip is barely believable
– Out-performs some super sports cars at half or a quarter of the price
– Muscular looks