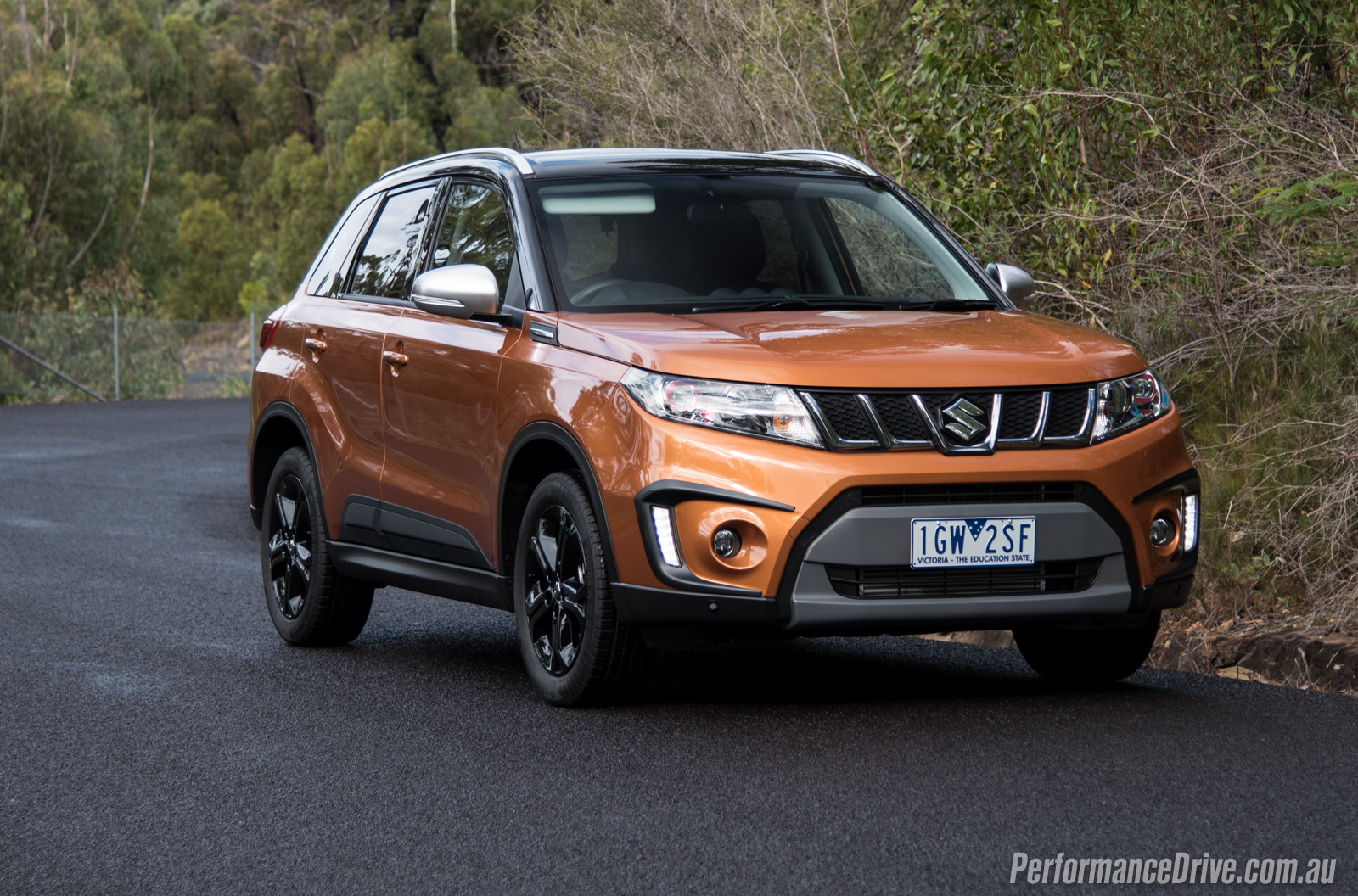 Five years ago the acronym CUV didn’t even resist. Automotive journalists were still approaching the term SUV with caution, what with the American connotation and all. Fast-forward to 2016 and not only are CUVs a thing, they’re the most ravenously exploding segment in Australian car sales. 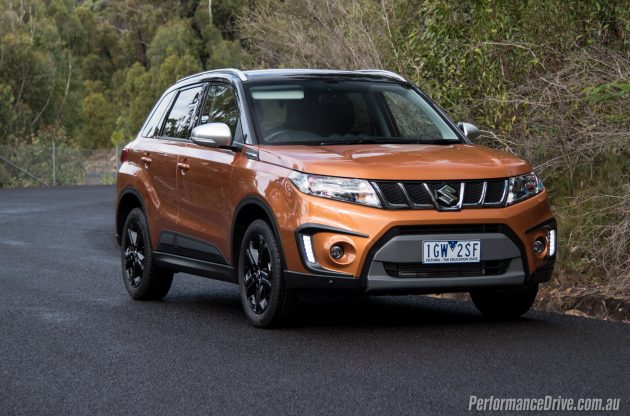 Now then, the new 2016 Suzuki Vitara S Turbo. Suzuki’s entrant into the tightly-competitive CUV market segment (or Small SUV segment as it’s known by VFACTS) has to go head-to-head with the likes of the popular Mazda CX-3, Honda HR-V, Mitsubishi ASX and Nissan Qashqai. With competition like this, it really needs to shine to get the attention of the buying public.

And that’s what we’re here to discover, whether the Vitara S Turbo is worth your time, consideration, and 29 thousand of your dollars. 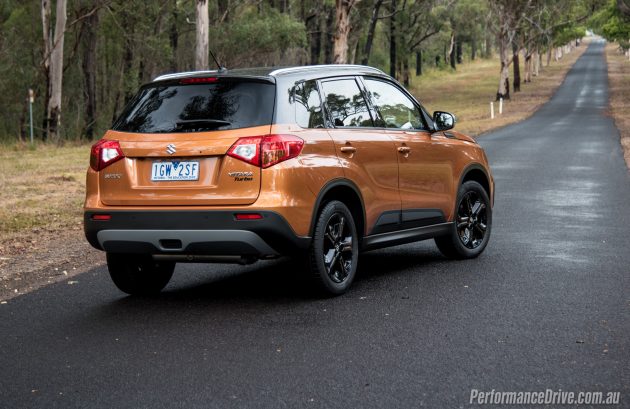 Approaching the Vitara S Turbo, the optional two-tone finish looks great in this Horizon Orange option – it reminds us of the Range Rover Evoque and its Zanibar Bronze colour scheme. Suzuki says around 60 per cent of buyers are going for the two-tone black roof option ($995), available in an assortment of colours, and thus added an exclusive red and black combination for the S Turbo.

The front grille is attractive without appearing too flashy, with some chrome accents and an intricate LED headlamp design. The wheel arches are finished in black, matching the 17-inch alloy wheels and complimented by the black roof and pillars, with chrome roof rails. We think the Vitara is a genuinely attractive offering, and certainly an exciting and fresh take on the compact SUV segment.

You can’t accuse the Vitara of being boring on the outside, but it’s a shame the inside hasn’t carried through the design flair. Sure, there are comfortable leather/suede seats, and a leather-wrapped wheel complete with flappy paddles, but there’s also a lot of cheap plastic trim. Suzuki has tried to amp up the atmosphere to some success with red surrounds for the air vents and red stitching. If that’s not enough, there’s a large Turbo badge that sits in front of the passenger to remind them this isn’t a normal Vitara. 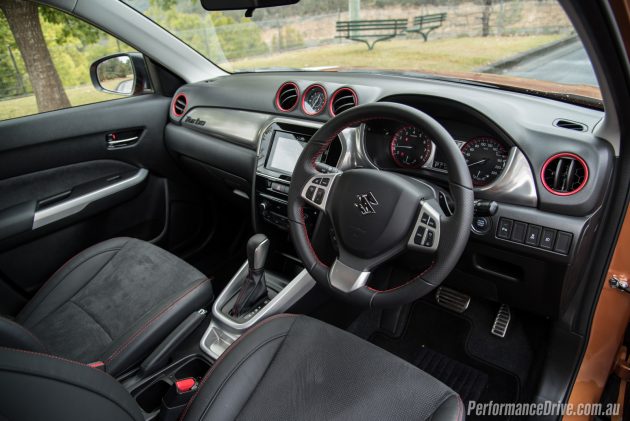 Having said that, it is a practical offering for its modestly petite proportions, offering space for five with moderate headroom, if a little tight for rear passengers. The 375L/1120L boot is obstructed by thick plastic on either side but can still accommodate a week’s worth of shopping or luggage for a weekend away.

An area the Vitara really shines is the amount of kit you get for your money. With keyless entry, seven airbags, a reversing camera, climate control, automatic and self-levelling LED headlights, automatic wipers, cruise control, electric-folding mirrors, and satellite navigation all as standard, it becomes one of the best value propositions in this class.

Suzuki’s infotainment unit isn’t a class-leader in terms of appearance or functionality, but the good news is the Vitara comes with Apple CarPlay support (sorry Android users), and that interface looks great. 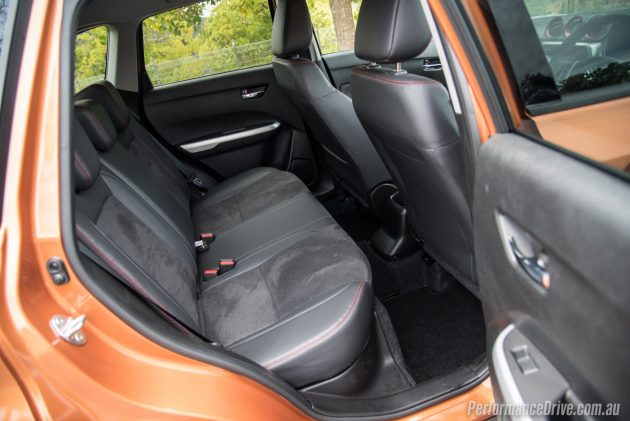 Driving the Vitara S Turbo, like the regular Vitara, is a breeze. It’s one of those vehicles that anybody can drive and immediately feel confident with. The controls and driving characteristics are completely intuitive and relaxed. It isn’t a big car either, so navigating car parks is simple thanks to its 4175mm length – shorter than a Mazda CX-3, despite offering more space inside.

The S Turbo is the most powerful variant in the new Vitara lineup, pumping out 103kW and 220Nm from a turbocharged 1.4-litre four-cylinder. While these headline stats don’t suggest much of a spirited drive, the S Turbo weights just 1160kg, nearly 200kg lighter than the Honda HR-V. Our review car here is the front-wheel drive variant, with all-wheel drive available at a $3000 premium.

So how does the engine compare to its non-turbo counterpart? The power delivery can be a bit unpredictable due to a capable but temperamental six-speed sports automatic transmission, but there’s a steady stream of torque on hand from just 1500rpm all the way up to 4000rpm. This makes a huge difference in daily conditions as it means you don’t have to push the little machine as hard to keep up with traffic, especially out on the highway, compared with the 86kW 1.6 Vitara.

We had fun in this front-wheel drive version. In the wet the front end tries to bite down and struggles for grip as you add more throttle. This isn’t behaviour that you’d normally associate with a Suzuki Vitara, so it’s nice to see its more adventurous side. In dry conditions we timed 0-100km/h in a respectable 8.43 seconds, which is significantly quicker than the 11.68 seconds we achieved in the non-turbo automatic Vitara 2WD 1.6. It also betters the 109kW Mazda CX-3 2.0L (8.8) and 105kW Honda HR-V (9.2).

Don’t be fooled by the turbo badge and the connotations of terrible ride quality that usually comes with hotted-up variants. Suzuki hasn’t touched the suspension, so the Vitara S Turbo is equally as comfortable on the road as its less-powerful brethren.

Too often the quality of a car’s ride is ruined by an increase in power that inevitably leads to suspension tweaks, so we’re happy to report Suzuki has kept comfort a high priority in the Vitara S Turbo. This means, in its element, the city run-around, it remains compliant and smooth, with some hints of rubbery bounce in traditional SUV form.

That leads us onto one of the Vitara’s biggest trump cars. Its economy. Despite the increased power and respectable performance over the non-turbo version, you can still return a sub six-litre figure per 100km. We were able to better the ADR combined cycle claim of 5.9L/100km, emphasising the Vitara’s adaptability. Suzuki vehicles have always been renowned for sipping fuel. In that respect, fans and return-buyers won’t be disappointed here. 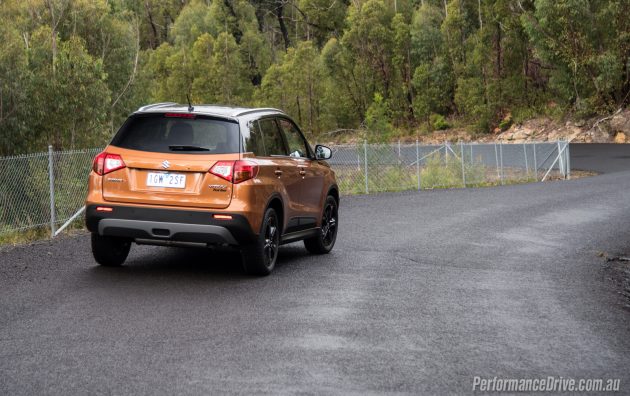 We won’t go as far as saying the Vitara S Turbo has two distinctly different personalities, but it can shift between a quiet run-around to a modest performer remarkably well. Objectively speaking, this is an attractive offering from the get-go, with its performance, practicality and generous equipment offering resulting in an exceptional value package.

Adding a turbocharger to the Vitara hasn’t made it a thoroughbred, nor was it intended too, but it has given the Vitara a bit more personality. You may not have considered the Suzuki Vitara before, but we’re here to tell you it is time to check this one out. The Vitara is now pinching at the heels of the class favourites; it would be a very difficult choice between this, the CX-3, and the Honda HR-V in our opinion.