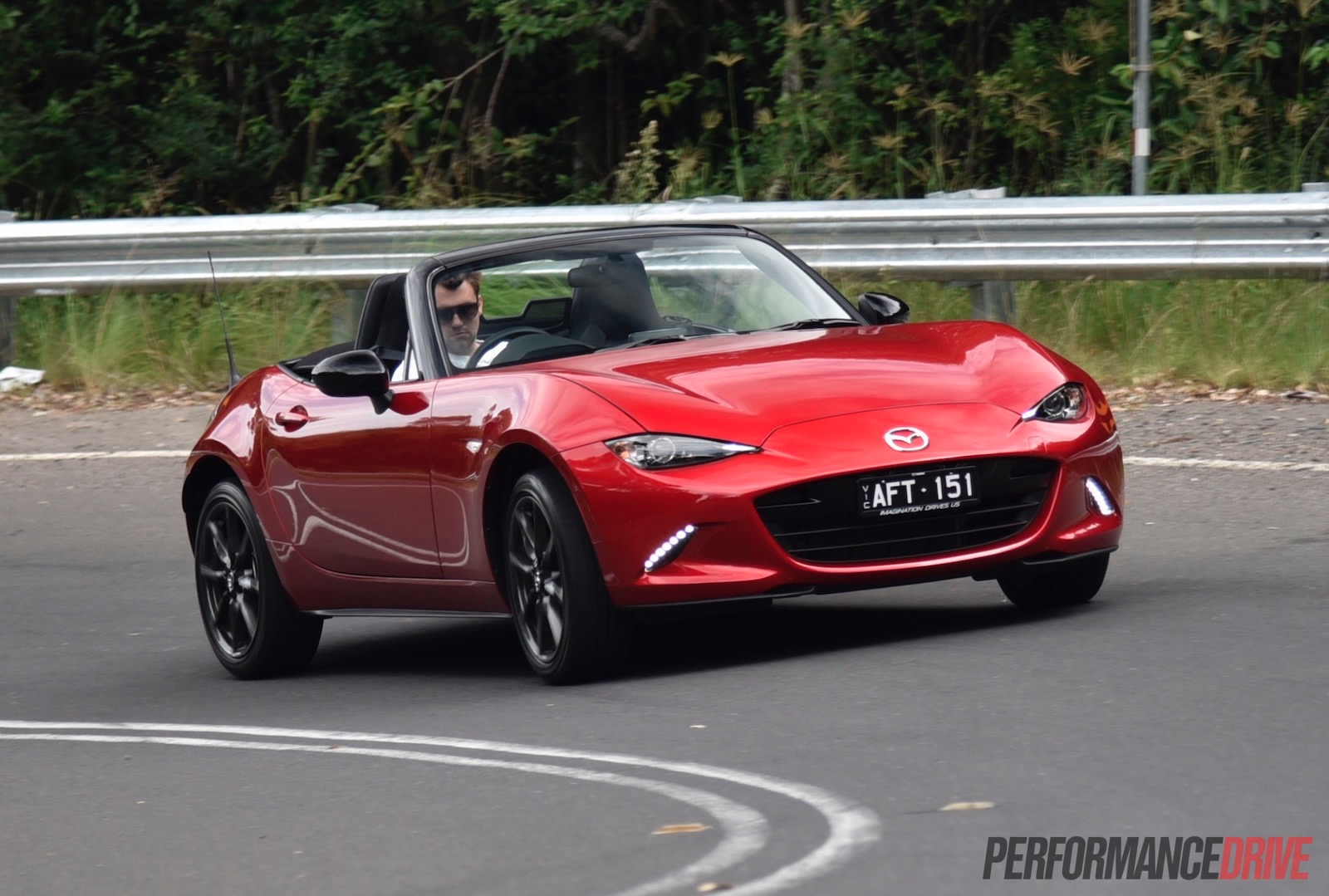 The 2016 ND Mazda MX-5 is a car that has been absolutely saturated with praise and accolades since its launch, and it’s not hard to understand why. 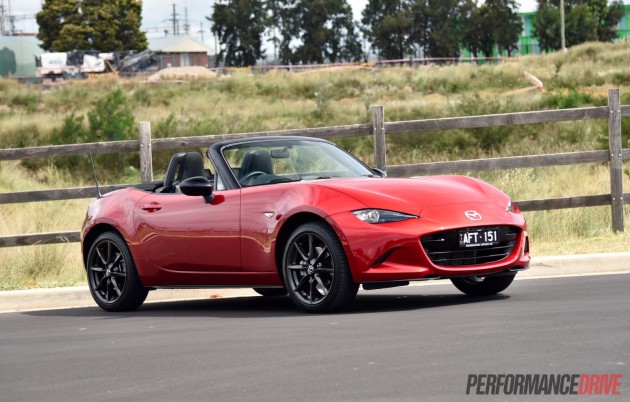 The fourth generation of Mazda’s rear-drive, open-top sportster is around 100kg lighter than the previous NC model, it comes in at a cheaper entry price, and offers improvements between 1.2 and 2 full litres/100km in average fuel consumption.

Starting at $31,990 for the 1.5-litre version and from $34,490 for the 2.0-litre six-speed manual Roadster tested here, the new car is far more accessible, economical and technically advanced than its forebear. But it has to be; Toyota’s 86 (and its Subaru BRZ twin) has redefined what an affordable sports car is all about. While the MX-5 was still sitting in the mid-$40k bracket, here came a sub-$30k coupe, with a 2.0-litre boxer engine and extraordinary talents. So it’s fair to assume this has influenced the direction of the latest MX-5.

In year-to-date sales Mazda is trailling the 86 slightly at 324 sales to 440 so far this year, while both pale to the Ford Mustang’s 745 in the same sports car segment. It is still a frontrunner and might take some time to truly fire. So, does the latest iteration of the world’s most popular sports car live up to the hype and deliver true enthusiast thrills? 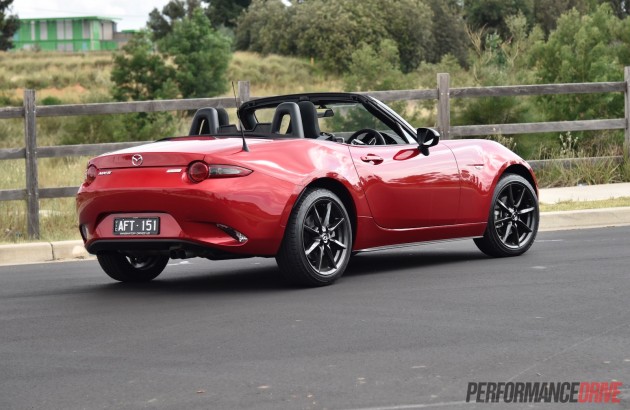 Normally sunvisors don’t warrant mention in a vehicle review, let alone an introductory paragraph, but the MX-5’s visors appear as though the fat has been surgically trimmed from them. They stand out as a neat embodiment of the gram-for-gram weight saving philosophy the company took in developing the new MX-5.

For the Roadster and the flagship Roadster GT version you get a 2.0-litre engine with 118kW and 200Nm, propelling a 1005kg mass (non-GT) consisting of high-tensile steel. A six-speed manual is standard while a six-speed automatic will set you back another $2000.

The instruments are clear, with a central tachometer that features a gear indicator with shift suggestions. This is part of a three-binnacle cluster with speedometer and fuel/speedometer on either side. 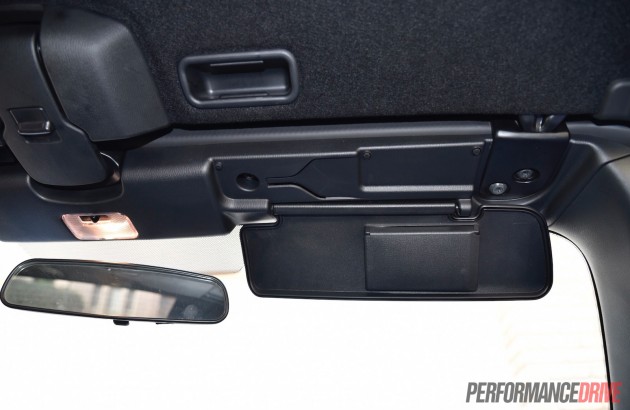 A three-spoke tiller featuring a neat array of audio and cruise control buttons is a delight to use, while the two cloth-trimmed seats look good and a far more comfortable and supportive than they have any right to be for lightweight, sports car items. There is an overall impression of commonality with other Mazdas, but it does not suffer for this. The turbine-style air vents and switchgear do not feel cheap. A high central tunnel with primary audio controls makes you feel like you’re sitting embedded into the car itself, while the single-latch roof mechanism is so elegant and easy to use, you will take it down at every possible opportunity.

If there’s any criticism to the interior, considering its affordable $35k price tag, it’s that it can feel quite small and confined. Getting in and out requires lots of bending too, which you should probably expect in a low-slung sports car anyway.

The exterior lines and styling are absolutely superb we think, with a bold, confident and slightly exotic look about it – particularly the pinched front haunches which evoke the lean shoulder of a predatory jungle cat ready to pounce. Our test car had kids and adults alike with mouths agape, some even mouthing ‘Ferrari’. The simple, masculine styling of the ND is a deliberate ploy by Mazda to silence the ‘hairdresser’s car’ critics; overcompensating types who don’t understand the depth the MX-5 has always had. 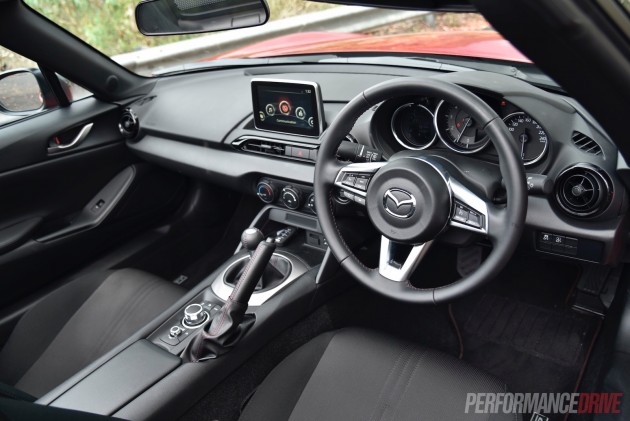 After the engine bursts into life, the car is easily coaxed into forward motion with a short-throw, precise and mechanical gearlever; with a gearstick and shift action that invites you to change gears for the sake of it. Clutch action is light, and the engine is torquey enough to roll off the line with no throttle. Power delivery is quite muscular, with the kind of response only a naturally aspirated engine can deliver. Having said that, more herbs wouldn’t go astray but it does not feel wanting.

There is no driveline shudder. It is so easy to drive, even a manual virgin could master it in no time. Once you get into the upper reaches of the rev range (5-6000rpm), a rich induction staccato adds a richness to the four-banger symphony. By this time, you are really moving out. To our surprise, the VBOX recorded a best 0-100km/h time of 6.94 seconds. This is very quick for a naturally aspirated vehicle with 118kW, and we put this largely down to the featherweight nature.

As you move through traffic the open-top visibility and compact dimensions combine with razor-sharp response from the steering and throttle to give you the confidence and audacity to find gaps you would otherwise miss. In this way, we think it could potentially reduce commuter time in dense urban areas. At low speed, the wow factor and user-friendliness make it a pleasure to drive and also contribute to stress reduction.

It’s when you encounter some challenging hairpins and twists that the MX-5 truly shines though. Here is a car that encourages even novice drivers to switch off the DSC and explore its limits. The steering is very precise, positive and helps you place the car accurately. You can synchronise it with downchanges and throttle inputs perfectly before the apex. 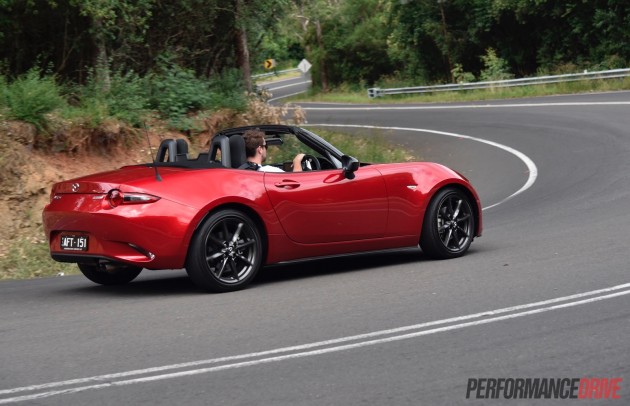 Suspension travel is absorbent but bodyroll is well contained, with just enough coming through to tell you what the car is doing. It can generate enough lateral g-force through the 17-inch Bridgestone Potenzas to make your passenger neon shades of green. You really do feel hard-wired into the car, astonished as it sits flat and responds so quickly to your inputs.

This isn’t a tail-out drifty car, but a well-timed stab of the throttle can provoke it to step out and sharpen your cornering line, helped by the standard limited-slip differential. Despite the short wheelbase, it always feels predictable and controllable. Don’t expect wicked angles, though, unless you have an open area and can use plenty of momentum rather than power. The body feels rigid during heated driving, with the top up or down. 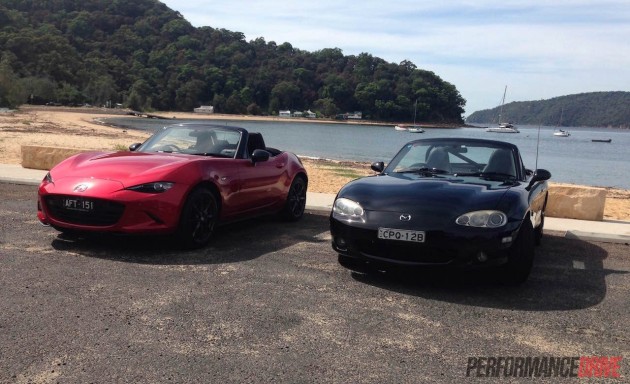 We jumped into an older NB MX-5 for short drive which instantly highlighted the sheer progress. An excellent car in isolation, after the ND it felt twitchy and prone to tramlining. It must be said the hydraulic steering may have a nicer, fluid feel just off centre, with the stubby short-throw gearbox perhaps offering less effort but overall, it’s chalk and cheese.

Even when being grabbed by the scruff of the neck, the new MX-5 2.0L never exceeded an indicated average consumption of 8.8L/100km during our test, with a general average of 7.9 indicated. Fuel bills may be high though because you will want to take several unnecessary drives, just for the fun of it. The fuel tank is only 45 litres so it doesn’t cost much to fill, fortunately.

As well as being fun and agile in the suburbs and in the mountains, this is definitely a great long-distance car too. A forgiving ride over all but the harshest of bumps, supportive seats, and, although harsh at higher revs, the engine quietens down in sixth gear to make this a very livable car for long touring. High speed stability is excellent as well, with surprisingly low turbulence even at freeway speeds. 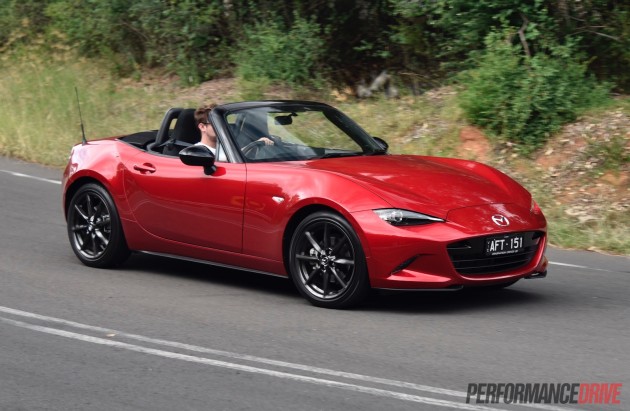 To be honest we found it extremely hard to find fault with this thing. Maybe the engine is a bit gruff when cold (as most direct-injected mills are) and the lack of a spare tyre could be annoying, but neither of these things really register. It gives you more than compensation in traffic and during fun-driving conditions.

The truth is, this is more than just a precision driving instrument. It is an assurance that even as automakers invest in autonomous technology, as emissions laws become restrictive as does safety legislation, a modern, pure and involving driving machine can still exist and at an attainable price.

The confirmation of a next-gen 86/BRZ successor, and possible production of the Opel GT concept, mean this sacred ground is safe for at least another decade. We encourage other carmakers to follow suit in this segment.

This is the kind of purchase where buyer’s remorse would be non-existent. We were sad to hand the keys back on this one. To say Mazda has nailed the brief would be an understatement. We reiterate our plea for other carmakers to produce more affordable, fun to drive rear-wheel drive sports cars exactly like this one.