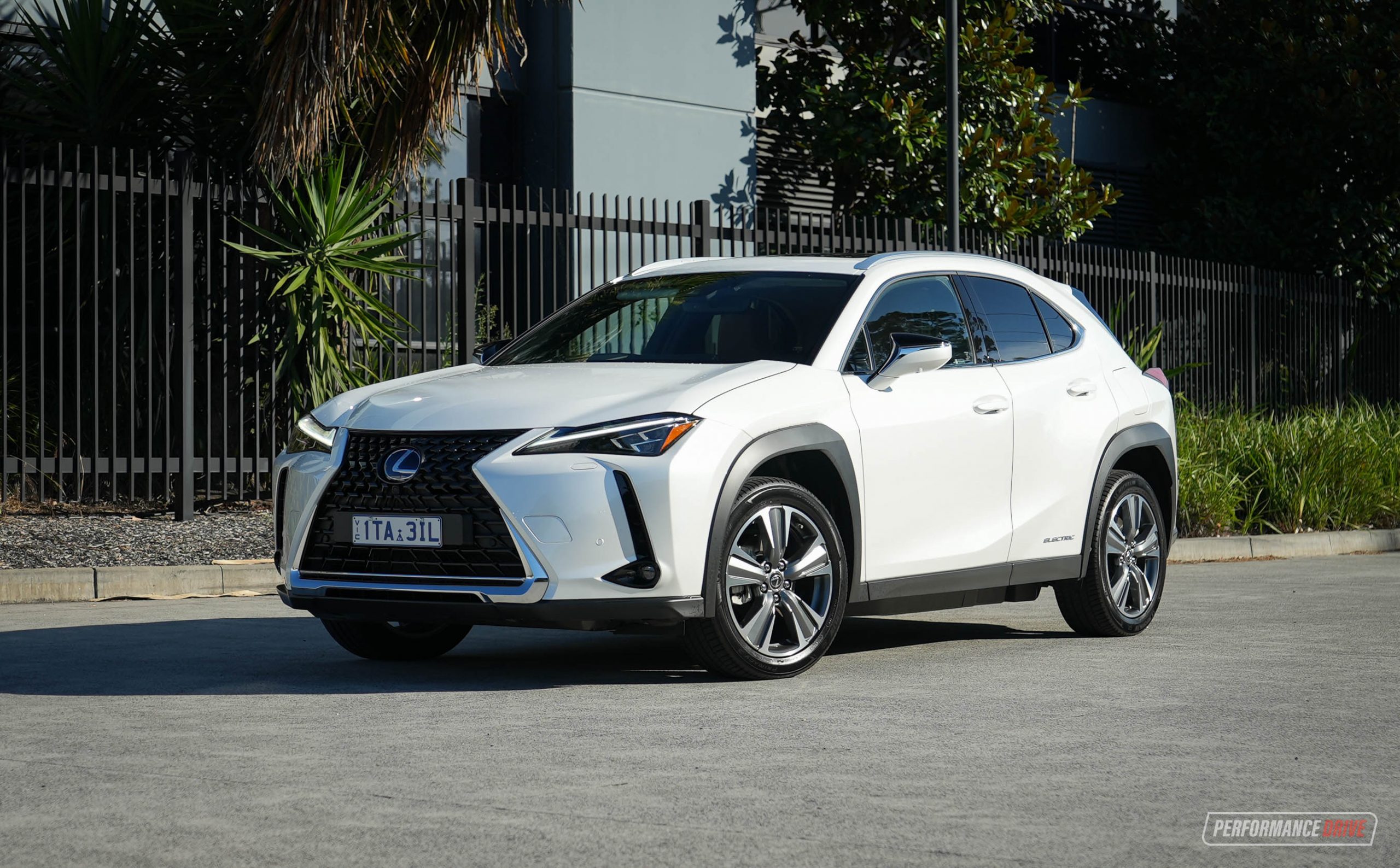 It seems like the auto market has exploded with electric vehicles just in the last six months or so, particularly in the small-to-medium crossover market. Lexus is part of that big bang too, launching its new UX 300e. It is the company’s first fully electric vehicle. 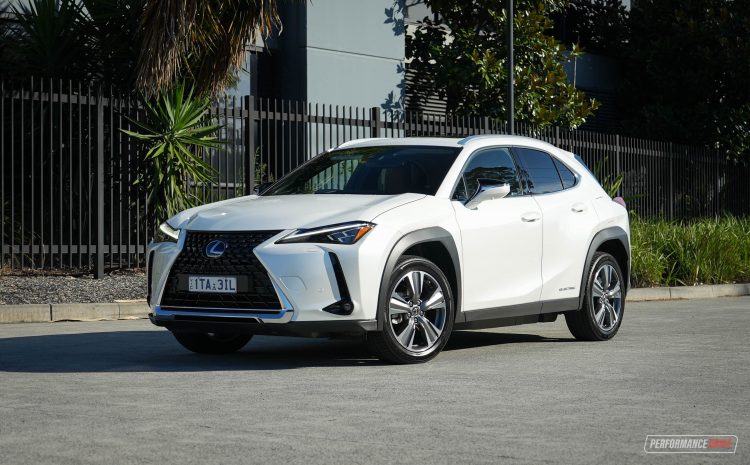 You are spoiled for choice in this space at the moment. Just to name a few – although some are not specifically in the exact-same small premium SUV class as the UX – you have the BMW iX3, Hyundai IONIQ 5, Kia EV6, Mercedes-Benz EQA, Polestar 2, and Volvo XC40 Recharge Pure Electric.

Some of these are completely bespoke models, albeit sharing some parts with other showroom siblings, while some are simply an electric version of an existing model line. The UX 300e is the latter, looking essentially identical to the UX 200 and UX 250h.

Lexus is offering two different trim lines for the 300e in Australia, including the base Luxury and flagship Sports Luxury. There is no middle ground F Sport, like other models. Prices start from $74,000 and $81,000, respectively.

It is the most expensive UX, but against those semi-rivals mentioned above it should be an easy figure to digest considering this is very much a premium offering. However, it is smaller than most of them. 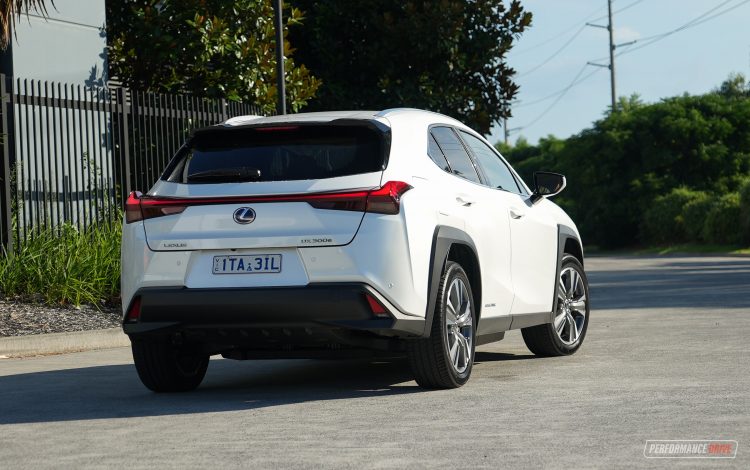 Lexus UX sales have been going steady since it arrived in 2019, with 1403 units shifted in Australia during 2020 and then 1744 in 2021 – it was fifth most popular in its class last year. Now with this new 300e fully electric version in its fleet Lexus has a stronger hold on the segment, and as such it is one of only three nameplates in the class offered with a fully electric option.

Out of the closest rivals, the UX 300e is one of the smallest. Cabin space doesn’t stack up as well against the XC40 Recharge Pure Electric, for example. And although the on-paper specs say you have a 414L boot to utilise, the space presented does seem much less than that in person. The floor is really high (about 11L available under the floor), and it doesn’t seem to stretch in very deep. This suggests the UX is targeted at either younger generations and/or seniors, and in either case as singles or couples. Both buyer segments probably don’t rely on or need a big boot for the weekly doings. 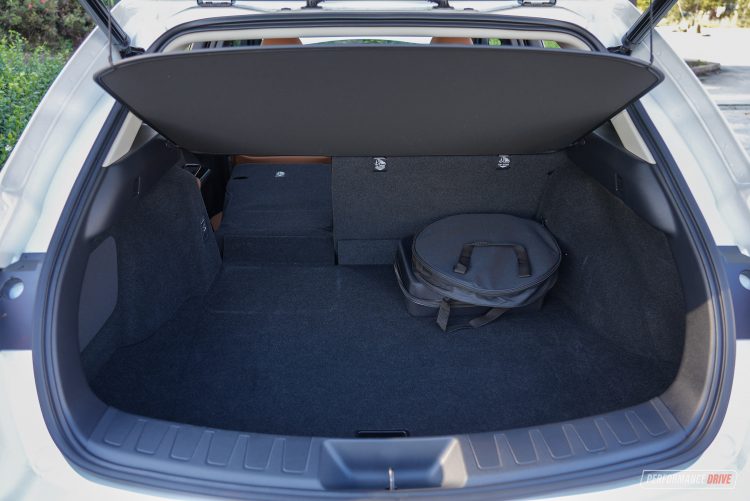 Another area that indicates a swing to that target market/s is the cabin. It is lovely in here. Soft leather ensures optimum comfort, with a good balance between support and relaxation from the sporty seats. Passenger comfort is good, but, the cabin feels like it is at the smaller end of this class. It’s intimate and cosy rather than open and spacious.

Rear seat space is okay. The seat cushion is pretty long, offering good support, but it doesn’t leave much legroom. A fairly narrow overall width means it is squishy with three adults in the back. It is great to see climate vents and charging ports though, and even seat heaters in the back. Such amenities are usually left out in small vehicles. 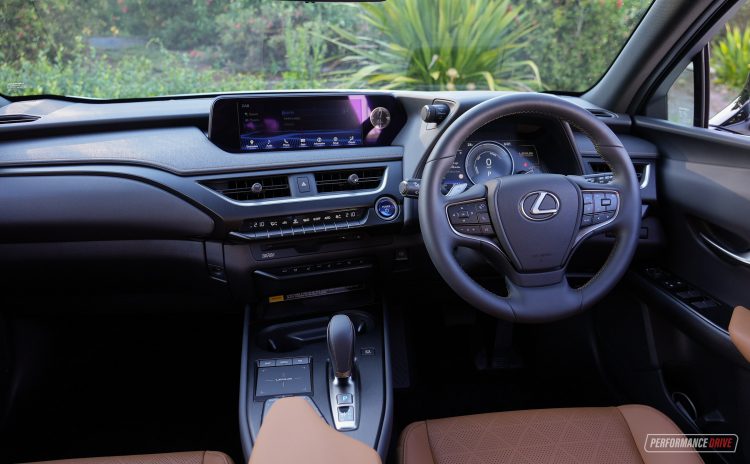 In the front there’s a 10.3-inch wide-screen media interface atop the dash, and it’s controlled through a rather fidgety touch-pad system on the console. Lexus is persisting with the touch-pad technology which it introduced a few years ago. In our opinion it can be quite distracting to use while driving. More so than rival systems anyway. All switchgear and buttons feel really nice, and most fixtures and furniture display outstanding build quality as per Lexus tradition.

Both electric variants are front-wheel drive, with a 54kWh battery mounted under the cabin (you can see it swelling below from some angles). This feeds a single 150kW electric motor that sits under the bonnet. With an output of 150kW and 300Nm, it is the most powerful UX in the showroom. So as you would expect it is also the quickest UX, with an official 0-100km/h time of 7.5 seconds. And that’s despite its hefty 1840kg kerb weight. We saw 7.51 seconds during our usual Vbox tests.

Another benchmark for the nameplate is its quietness, offering exceptionally smooth and almost completely noiseless power delivery. You can hear a typical electric whine more prominently when you put your foot down, but most of the time the underlying luxury nature is heightened by its calming silence. 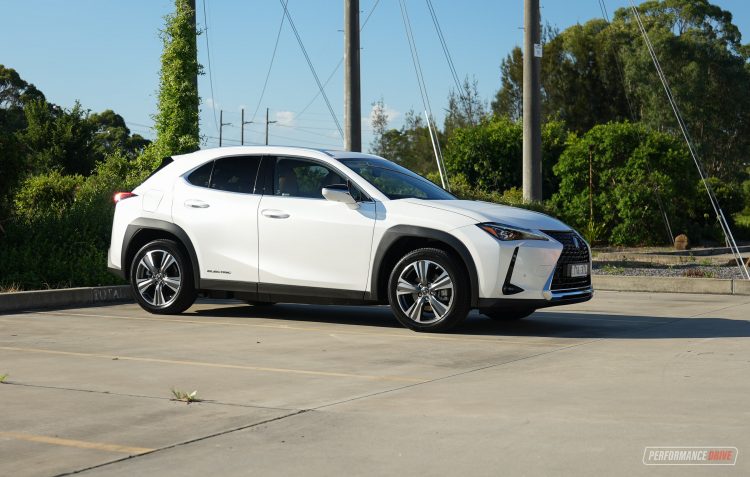 Ride comfort is also superb, as you’d expect from a Lexus. The 300e uses a bespoke suspension setup so it suits the heavier running gear. Changes include larger trailing arms at the back, dedicated EV dampers, new bushes, and enhanced steering. It’s all mounted on the wider company’s TNGA platform. Lexus promises even more engaging handling over the regular UX models in fact, and that’s partly thanks to a lower centre of gravity.

Out on the road it feels easy, light, and predictable. It’s a Lexus. The steering wheel feels great in your hands, and it glides around corners. Push it hard through bends and that 1840kg mass becomes evident, with a gentle protest from the front tyres as it tries to brace against mild understeer. There is a Sport driving mode which mainly focuses on sharpening up throttle response, but there are no adaptive dampers. 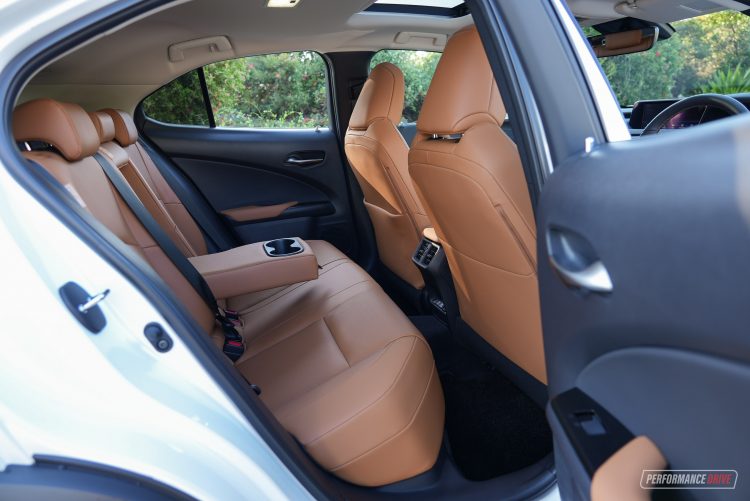 Speaking of protesting tyres, grip levels are very high for an electric vehicle. Because, with EVs you get instant power and torque, which usually causes wheelspin. As standard you get Michelin Primacy 3 tyres measuring 225/50 all round. They provide decent grip, however, the stability control system is the standout. Even in the wet the on-board systems sort out any potential issues before they happen. This gives you a heap of confidence behind the wheel. 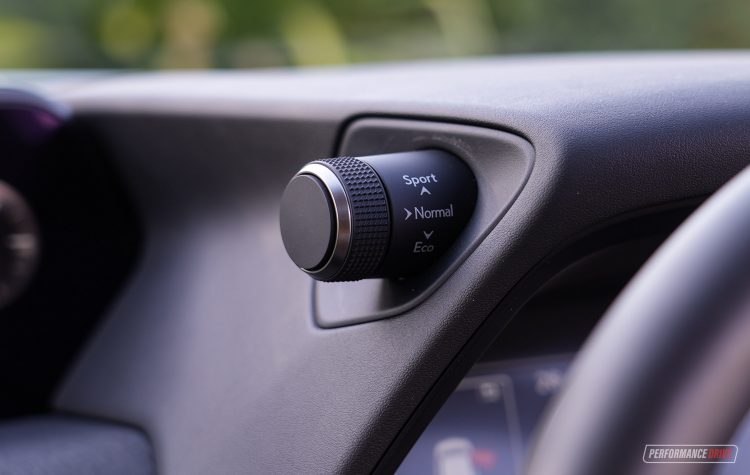 As for the driving range and charging. Well, it is one of the smallest-capacity batteries in this space, and the 360km (NEDC) range isn’t all that impressive. If you’re living out in the suburbs and make regular trips crossing key local government areas, forget it. This will drive you nuts with anxiety. Range anxiety.

As usual with an EV the real-world range figure depends on many factors, including whether or not the air-con is on, if you’re in Eco mode or Sport mode, and of course how you drive. 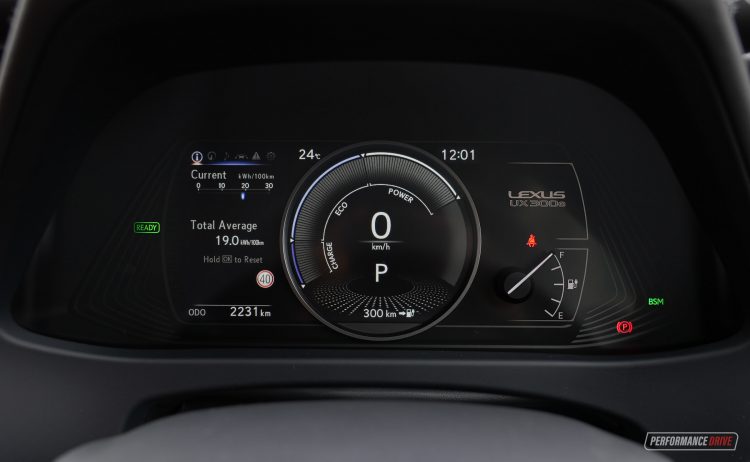 During our test the range was more like 300km. Fortunately, being a small battery means it doesn’t take very long to charge up. Compared with other EVs that is. Using a DC fast-charger the maximum input it will take in is 50kW. That’s not much. It takes around 1 hour and 10 minutes to recharge.

But the good thing is you’ll find a lot more 50kW public chargers in Australia than the rapid 150kW or ultra-rapid 350kW setups around. Using an AC plug at 6.6kW it requires around 6.5 hours. 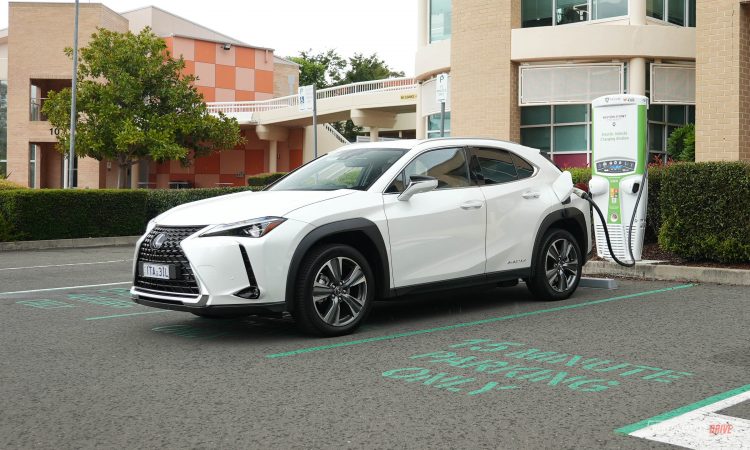 As a city runaround vehicle it is a very respectable offering. All of the usual Lexus qualities are here, including unrivalled build quality, a very comfortable cabin, nice ride, and lots of cutting-edge technology that is clearly showcased and available to engage with. And don’t forget about Lexus’s outstanding reputation for reliability and customer service. If you live in the city, particularly as a single or couple, this is a sound option worth considering.

On the other hand, the range can leave you feeling anxious. At 360km officially – and quite a bit less with the air-conditioning on and whatnot – it doesn’t seem like enough for anything outside the city. It is fun to drive though, with instant torque and good performance, and it steers with poise and solidity. Since this isn’t promising to be a grand tourer or even a suburb-hopping delivery van, we have to give it high marks overall.

PROS:
– Traditional Lexus build quality and attention to detail inside
– Neat and petite proportions make it very easy to drive and park
– High level of luxury for this class
– Smallish battery means it is reasonably quick to charge
– Both Type 2 and CHAdeMO sockets