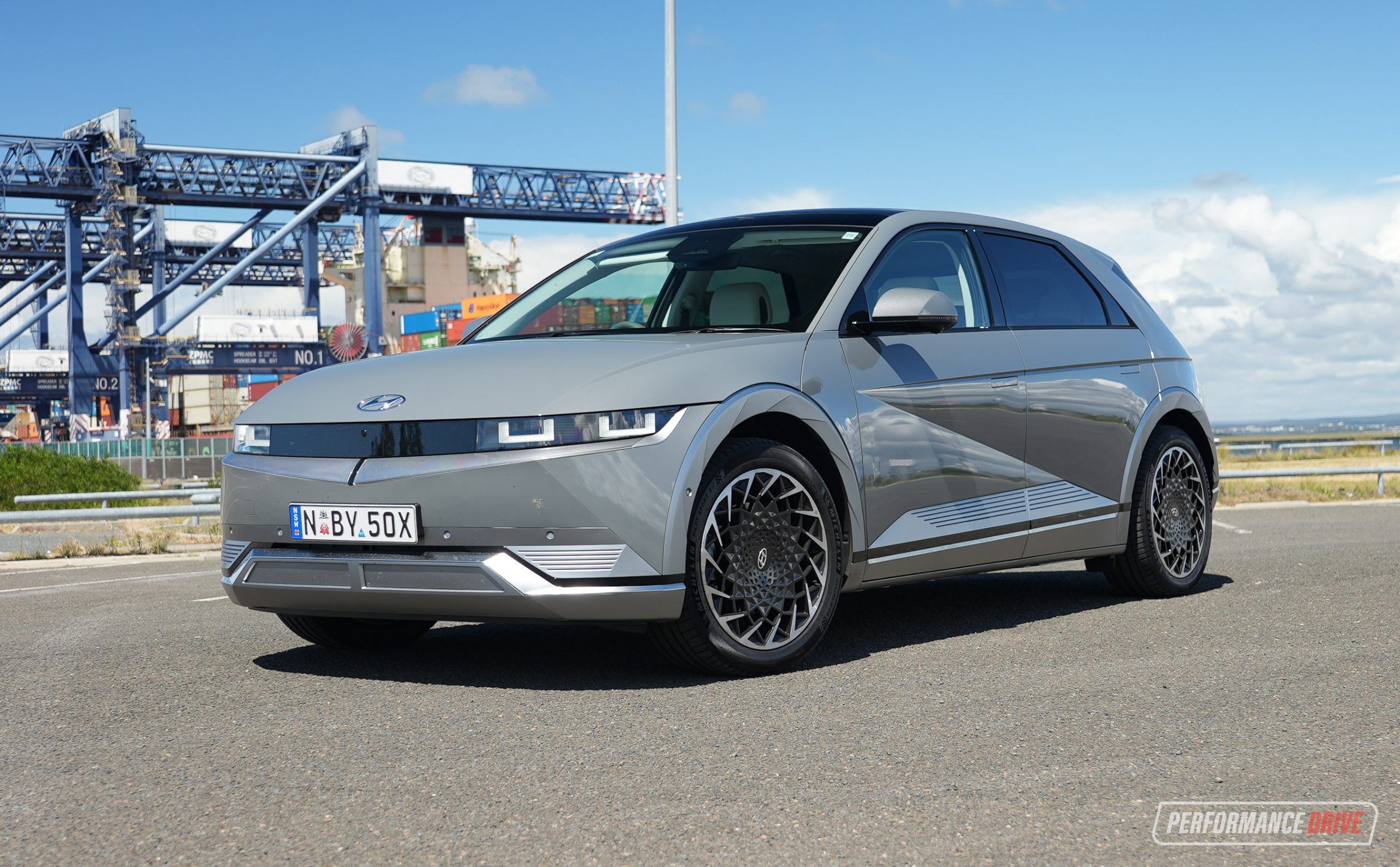 Well, well, well. What do we have here. Hyundai’s first dedicated fully electric vehicle, called the IONIQ 5. While many other carmakers are scrounging together their plans to offer a practical yet properly appealing electric car, Hyundai has swooped in with this retro number. 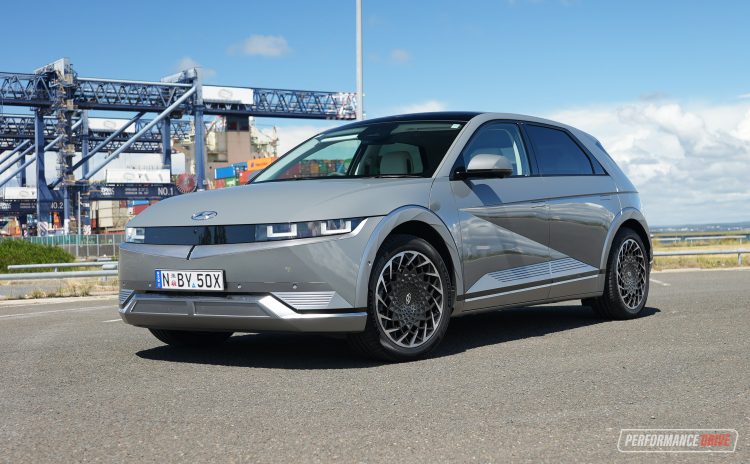 The IONIQ 5 is based on the greater group’s Electric Global Modular Platform (E-GMP). The layout is also used to underpin the Kia EV6 and Genesis GV60 siblings. In that sense, it’s finally good to see the chief brand launch the core product first. At least in Australia.

Two versions are on sale now, including a single (rear) motor version and an all-wheel drive dual motor (front and rear) version. Both feature the same 72.6kWh battery, and both come filled to the brim with all of the brand’s latest gadgets and gizmos.

Prices start at $71,900 for the RWD version, and from $75,900 for the AWD model (as tested here). That is steep for a Hyundai. And we don’t mean that in an offensive way. Simply looking at the company’s history, the AWD model is literally the most expensive Hyundai to ever hit Aussie showrooms – it even overshadows the top Palisade, which starts from $75,000. 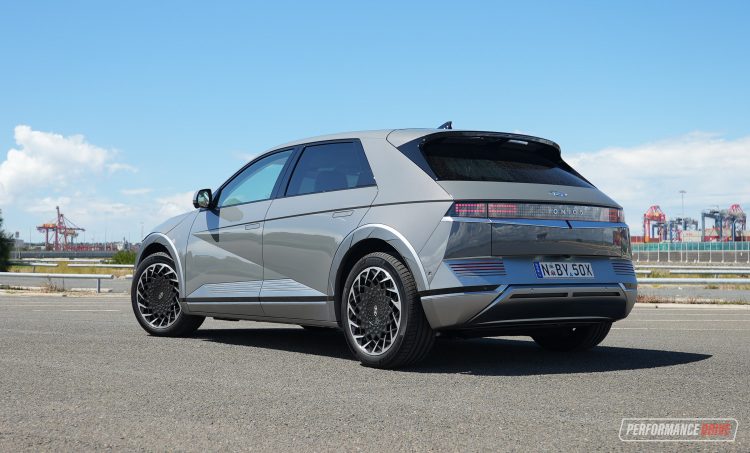 We’re not sure how to describe its shape. It’s not really an SUV, and it’s too big to call it a conventional hatchback. Whatever it is though, it is one of the most interesting new car designs on the market at the moment, heavily inspired by that awesome 45 concept from 2019. We love the pixel-style lights and the retro boxy shape. It really stands out. In fact, we can’t think of another car that we’ve had that attracted so many onlookers – we made about 10 new friends during this test.

Check out these 20-inch rims, too. The spoke design matches perfectly with the rest of the car in our opinion. They’re kind of retro, like something you’d expect on a 1980s Euro racing car or something, yet they are also futuristic, perhaps due to their size. And they’re wrapped in special Michelin Pilot Sport EV tyres, measuring a fat 255/45, front and rear. 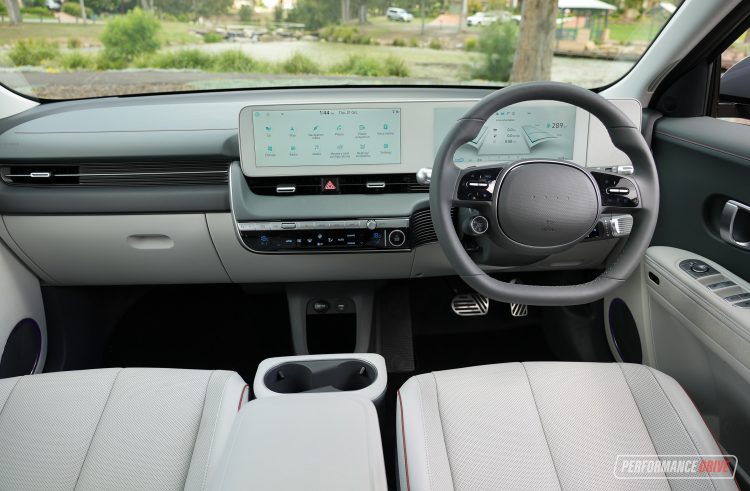 Wow, what a spectacular interior as well. Hyundai designers have managed to create an interior that’s not only practical and airy, but also quite luxurious and feature-packed. Two full-size 12.3-inch screens sprawl neatly across the dash, featuring a cool white colour backdrop and crisp graphics, with very few physical buttons cluttering up the dash. It’s really fresh in here, and environmentally-conscious thanks to the use of recycled materials. And there’s so much storage.

The adjustable centre console houses a large tray as well as a flip-down arm rest and storage pocket within, and there’s a wireless phone charger tucked away at the bottom. Another pigeon hole thing lies at the front with two charging ports. 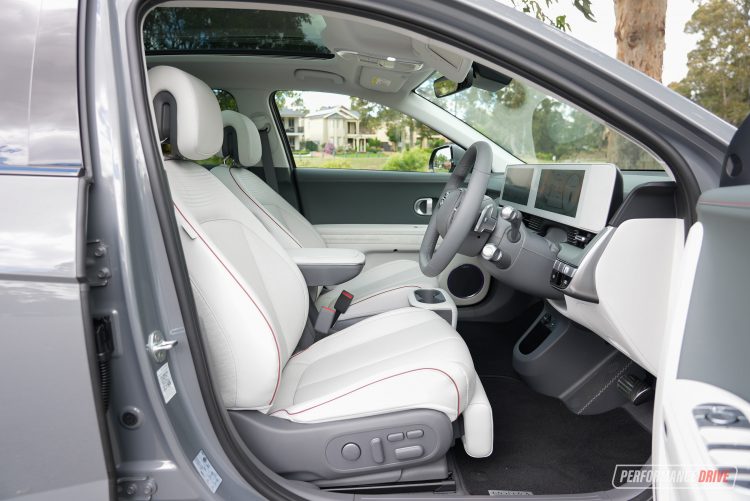 In the centre, the main touch-screen is home to pretty much all in-car functions, except we love that Hyundai has left a separate climate control panel down below. About the only thing that we don’t enjoy is the somewhat confusing array of buttons within the climate panel.

There are media and map buttons, yet no ‘home’ button. Instead, you have to hunt for it within the screen. We also find the speed readout position less than ideal as it can be obstructed by the steering wheel, depending on your seating position. 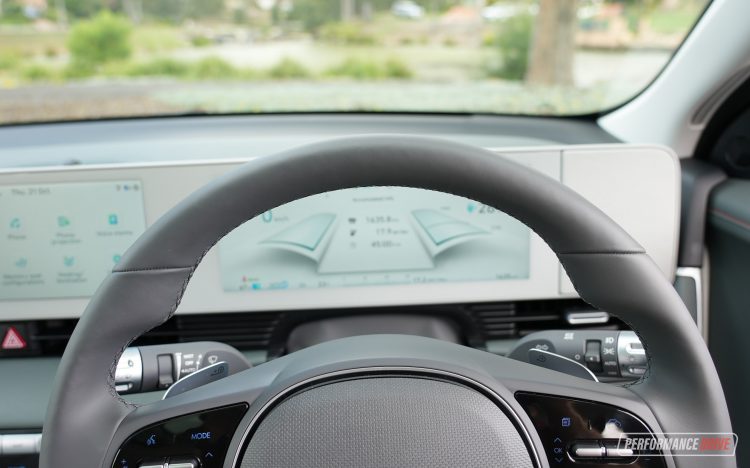 Rear seat space is really good, with about as much legroom and headroom as a decent mid-size SUV. There’s also climate vents secretly positioned on the pillars, charging ports, and recline adjustment so you can really kick back and relax. The door openings are also very wide, and thanks to the mildly jumped-up stance, getting in and out is as smooth as pouring custard. 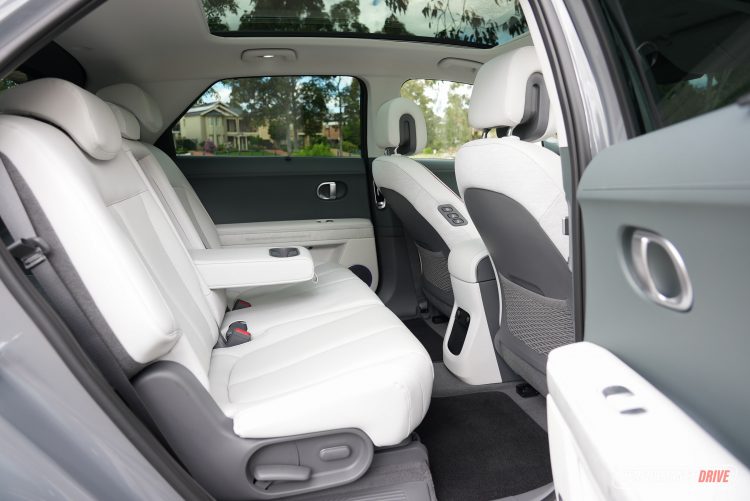 The boot is a bit deceiving. On paper, the numbers look good, with 560 litres or 1620L with the rear seats folded. But due to the sloping hatch lid, it can be difficult to pack in bulky or tall items. Especially if you compare it with a more traditional, upright SUV. Due to the motor under the floor, there is minimal additional space underneath.

Going for the base rear-wheel drive model does introduce another boot up front. In this AWD model though you get a small tub for the charging cord, and the vehicle-to-load power socket adaptor. The adaptor is actually a very cool item itself. It essentially converts the car into a power outlet, complete with a standard Australian socket. 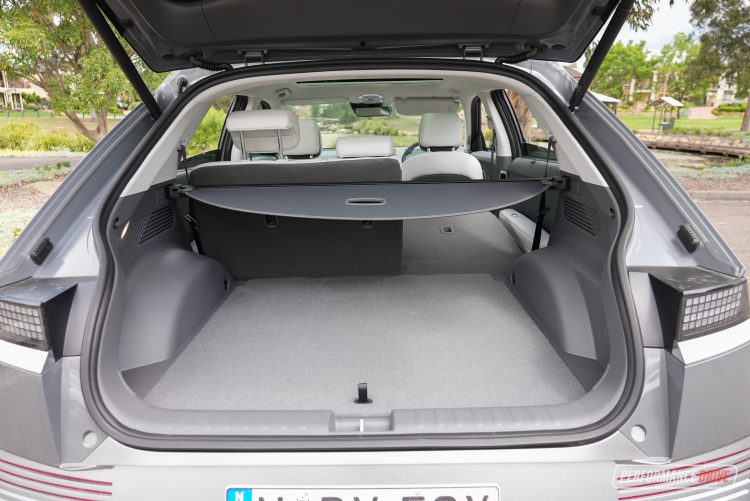 Driving an electric vehicle is always amazing the first time you set off. The silence is bewildering. And the availability of instant power and torque simply leaves combustion engines for dead. Speaking of which, we did some acceleration runs on a private road with our Racelogic Vbox Sport, and the best we saw was 0-100km/h in 5.14 seconds (just bettering Hyundai’s claim of 5.2 seconds), and the quarter mile in 13.63 seconds. With an official top speed of 185km/h, it was no surprise to see a top speed of 187.3km/h during our tests. 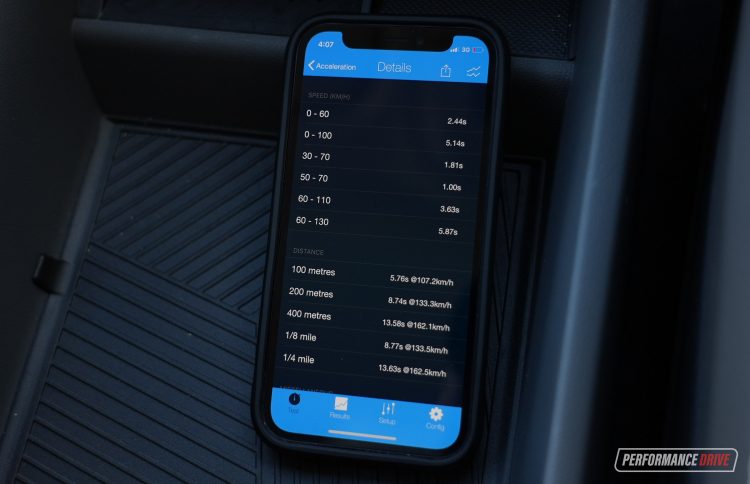 These are some quick times, needless to say. If you compare it to any small or mid-size SUV, it’s more than likely going to blow it out of the water. However, if you compare it to other, like-minded flagship electric vehicles that are out at the moment, the times are not so impressive. Firstly, the best Tesla Model 3 offers a claimed 0-100km/h time of just 3.4 seconds. The incoming Kia EV6 GT claims the sprint in 3.5 seconds, and the Polestar 2 does it in 4.7 seconds. 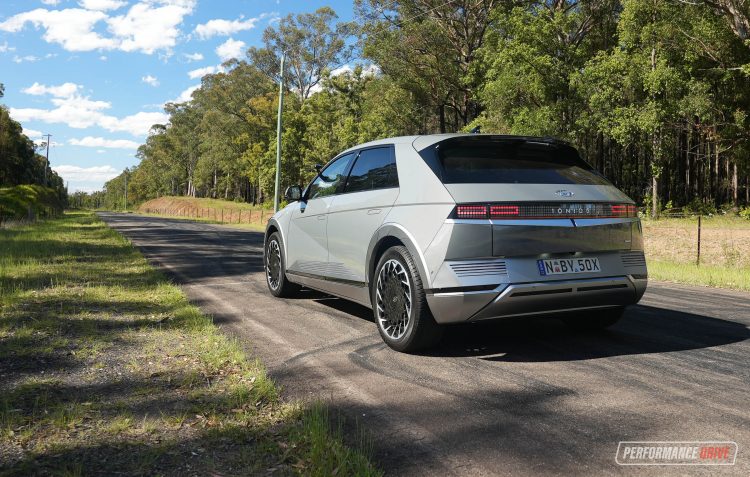 The fact that Kia – often regarded as the little brother/sister brand – packs a 430kW punch from its top model, we have a strong suspicion Hyundai’s N division has something up its sleeve for the IONIQ 5. If it doesn’t, well, that’s just a missed opportunity and poor marketing, in our opinion.

So, what it’s like to drive around town? It’s very pleasant, as you’d expect. Hyundai’s ride comfort is, as usual, quite soft and absorbent which is ideal for Australia’s shoddy country roads and city streets, and the steering is light and predictable making it easy to place on the road and park. A standard surround-view parking camera system also helps here.

Pick up the speed on a nice windy road and things become nervous. It seems like the suspension is just too soft for the vehicle’s weight. With a hefty tare weight of 2100kg, it is around 200kg heavier than it should be. The flagship Tesla Model 3, for example, weighs 1847kg. In saying that, the Polestar 2 dual-motor weighs about the same, at 2113kg. 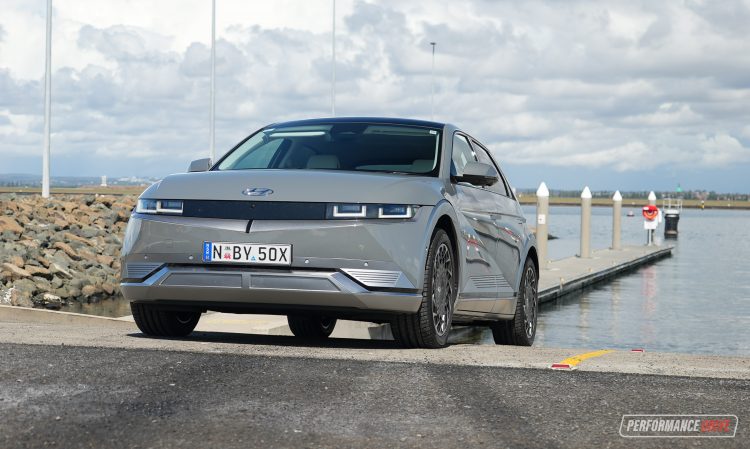 Without even pushing very hard we saw the stability control light flickering like crazy. It does feature a brake-type torque-vectoring system, but it is very intrusive for our liking. Even compared with a base Toyota Camry, this feels less resolved and less confident in the bends (every car should be equal to or better than a Camry). This is disappointing particularly as Hyundai of late has been right on top of this department. We’d hate to think of how things would be without those fat 255 Michelin tyres.

As for the range, the official average is 430km. We charged it right up and the dash said 445km. Can you actually achieve that in the real world? It depends. If you select the Eco driving mode and leave the air-con off, the range calculator seems pretty accurate to us. The moment you activate the Normal or Sport modes though the range diminishes quicker. We recently tested the latest Kona Electric (review coming soon), and we definitely feel like the on-board calculator was more realistic and accurate in that. Perhaps the RWD version (450km range) is the pick for those that suffer range anxiety. 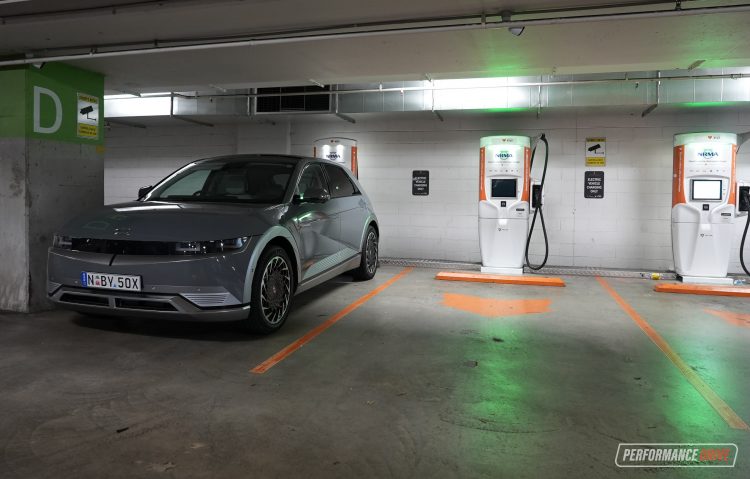 Charging is possible using ultra-rapid chargers, at up to 350kW. Well, that’s what the spec sheet says. During our review this test car failed to link up to a 350kW Chargefox station. We called Chargefox and they saw, remotely, that there was no issue with the charger. They suggested that perhaps a software update is needed for this particular vehicle. It had no issue hooking up to a 50kW unit, which happened to be right there as well.

UPDATE: It turns out others have also had issues with the specific 350kW charger that we used, which suggests it could be an issue with the cable or plug rather than the vehicle. Hyundai Australia has confirmed with us the IONIQ 5 is fully capable of working with a 350kW charger unit.

It showcases a truly inspirational design and the interior is cleverly packaged, being so clean and clutter-free but also environmentally-conscious in its use of recycled materials. However, we just can’t see the price justifying it all against the key rivals. The powertrain doesn’t stand out (for range or power) and neither do the driving characteristics.

We’re not particularly a big fan of the Tesla Model 3 – I personally find it quite sterile and emotionless – but you can’t ignore the ‘cool’ factor of the brand and the unbelievable performance it presents. And then there’s the very tempting new Polestar 2, which is quicker, more powerful, impressively equipped, and similarly eco-conscious, yet it is actually cheaper.

This is a very tough space, that’s for sure. And it’s only going to get fiercer for all brands. At this stage we think the IONIQ 5 clearly has a lot going for it but we’re not sure we’d be content handing over $75k for one. Not in the face of the competition anyway, both present and upcoming.

CONS:
– Very heavy for its class
– Handling not as tied down as we’d like, really reliant on stability control
– Pricey for its class