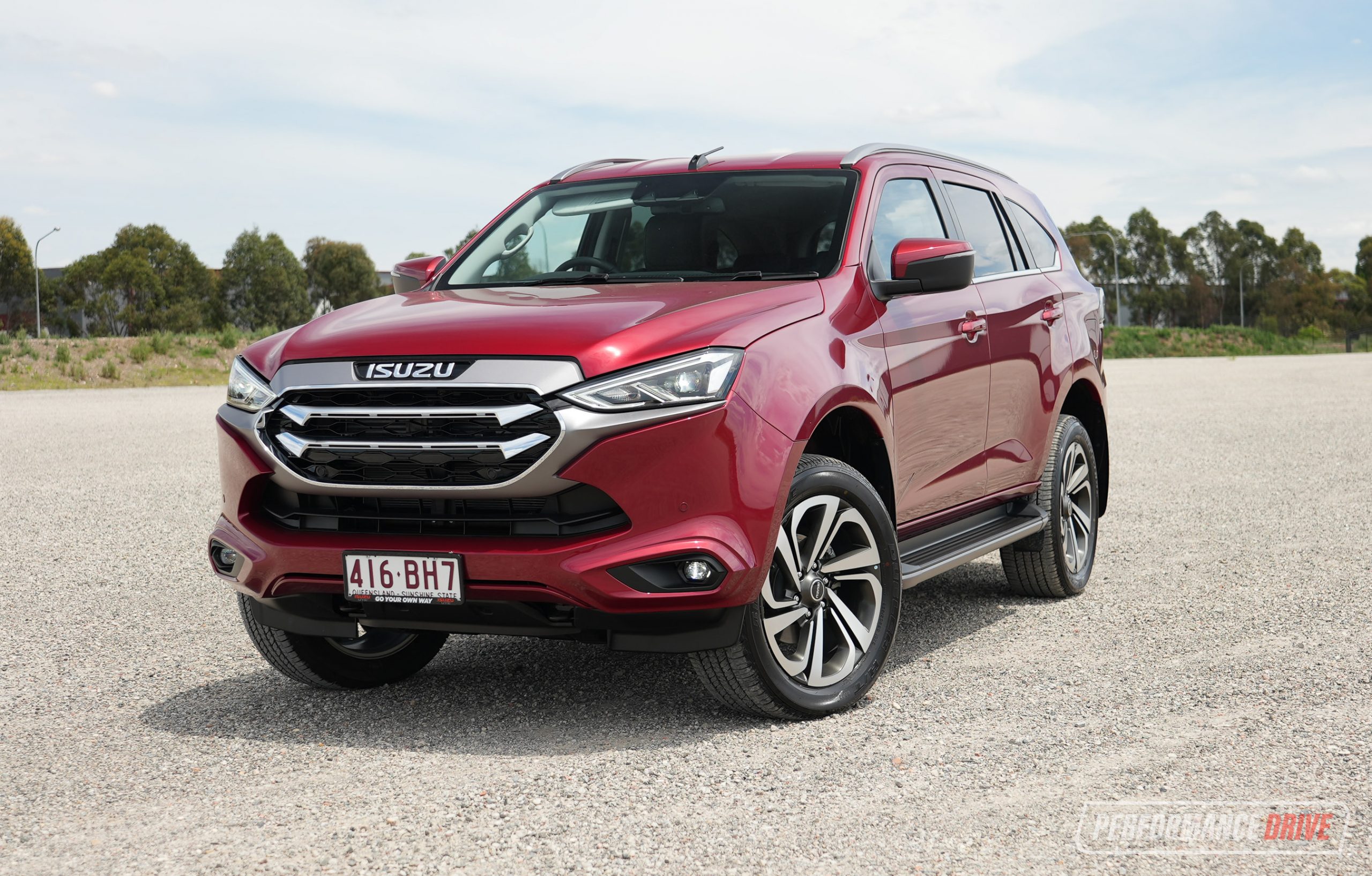 The Aussie car market is well and truly saturated with SUVs. But it can be difficult to sort through the fat to find a fully-fledged fourbie that is designed to perform off road. At the same time, you don’t want to miss out on some of that beaut new tech coming through. Isuzu has been getting that balance right since 2013 and has now released the second-generation MU-X for 2022. 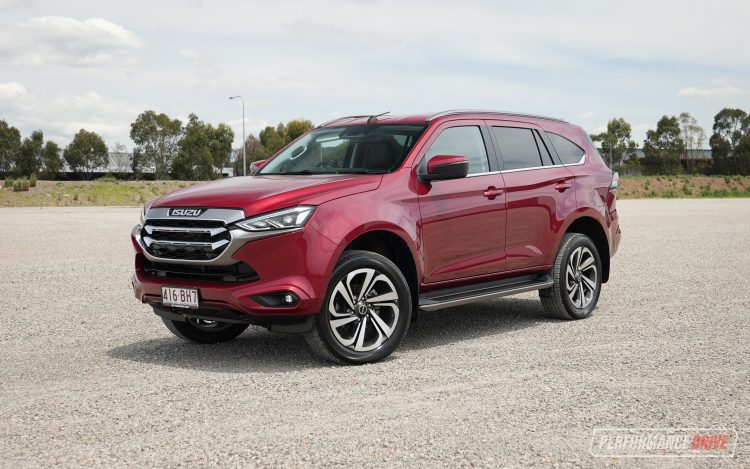 The MU-X has become a popular choice of SUV for buyers who need a tough off-roader that isn’t as expensive as, say, a Prado. And for the new model it has become even more palatable with a fresh design, a more powerful re-engineered engine, and some added tech.

The lineup is the same as the outgoing model, with the entry-level LS-M, the LS-U, and the range topping LS-T. Here, we’re testing the mid and top spec LS-U and LS-T variants. For each, 4×2 rear wheel drive, and part-time 4×4 setups are available. All of which are paired to a six-speed auto gearbox, and get the new 3.0L engine.

MU-X LS-M 4×2 base models start their pricing from $47,900, which is $4000 more expensive than the previous model. The top spec LS-T in 4×4 configuration will set you back $65,900, which incurs a $9.5k price hike over the outgoing model. Let’s see whether those increases are justified. (Prices exclude on-road costs.) 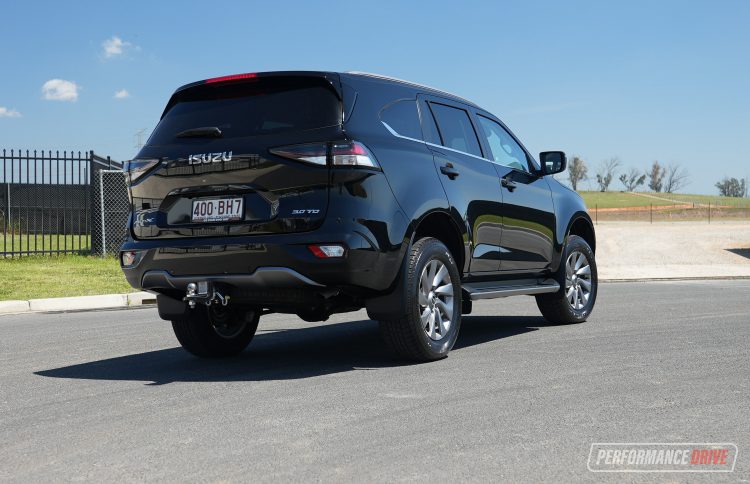 Isuzu as a brand is famous for making strong and durable trucks. And that underlying soul really shows in its passenger vehicles, too. But it now looks stylish and modernised. The front exhibits a bold stance with sharp new headlights and a tungsten silver and chrome grille (gunmetal grey in the base model LS-M). The rear also has some sharp new LED taillights that embed themselves among new sheet metal contours. We think the overall design proportions are spot on, exhibiting strength and modernness for a 4×4 but not too out there.

Stepping into the interior and you will notice a leap forward in terms of design and refinement. Noting that we had the two higher spec models, it is a space more modern than the previous model. Materials feel durable but soft to touch in the important areas. Interior lighting is notably brighter and makes the area easier to navigate. The seats also feel supportive and settle you into a high and confident driving position. 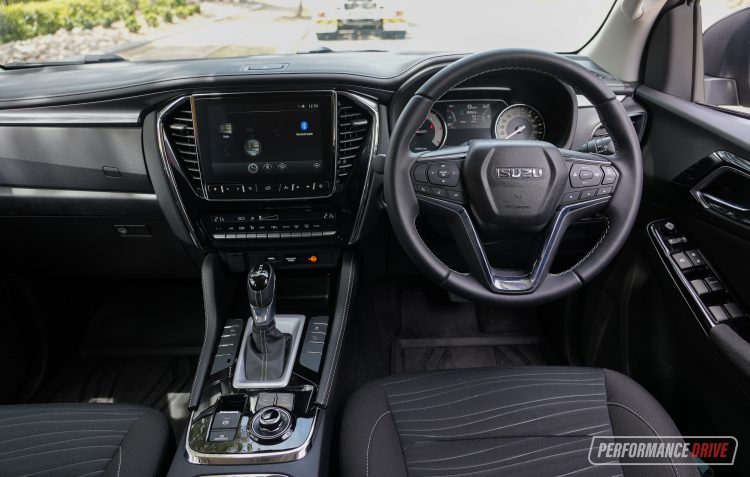 But there is a disappointing aspect that we just can not look past. Even though the centre 9.0-inch touch-screen is of high resolution and large (for its class), the menu and font are chunky and outdated, and the menus are the most restrictive we have experienced. You cannot scroll through song tracks or radio channels in a list unless the vehicle is stationary, for the sake of safety.

The same goes for the instrument cluster screen – you can only toggle between certain features when stationary – it’s enough to stop me wanting to buy this car, or at least get it modified after-market. 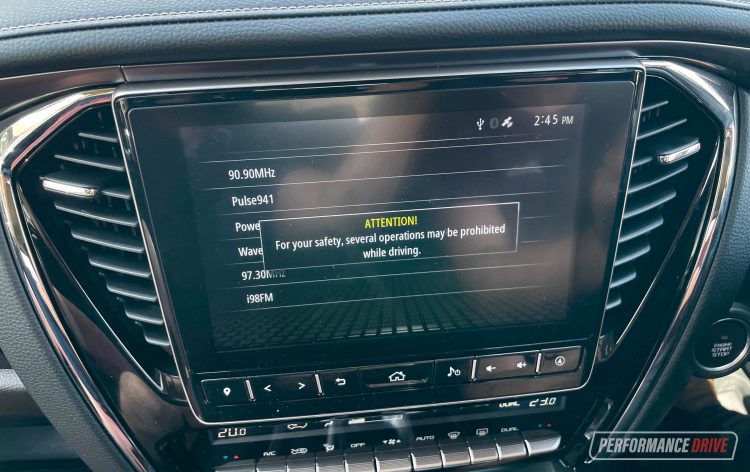 Interior space has improved in nearly every dimension. For example, the second row has been increased by 25mm thanks to the B-pillar moving forward. A redesign of the second-row seat also increases the third-row foot space by 10.6mm, and the third row is wider by 105mm across the seatback and 41mm across the seat base. There are a total of 12 cup holders and many handy storage areas scattered throughout the interior. Though, the upper and lower gloveboxes are quite small and shallow. 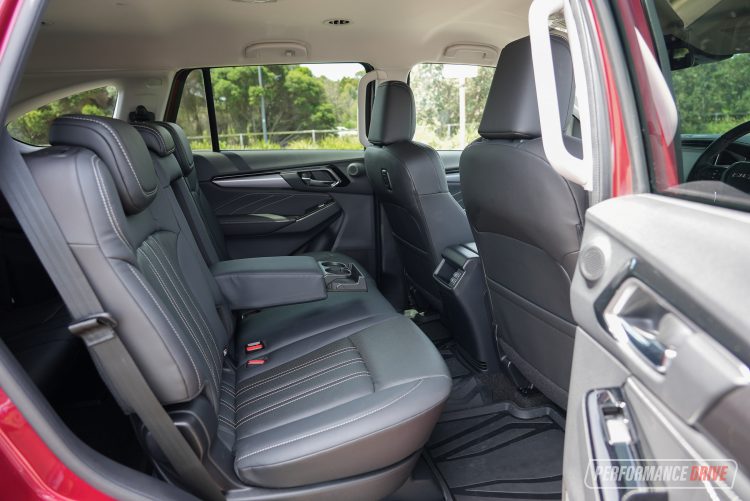 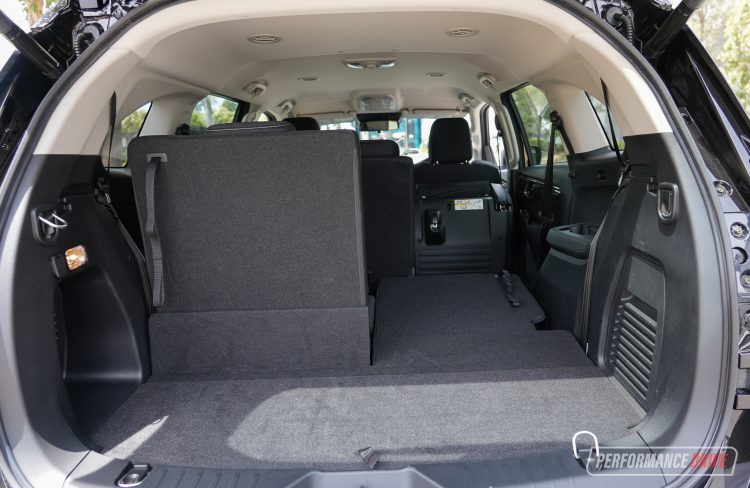 Regardless of the grade, servicing intervals are required every 15,000km or 12 months. Isuzu offers capped-price servicing for seven years (scheduled services), so you can gain some assurance with running costs. Warranty is offered for an impressive six years or 150,000km, and road-side assistance is granted for seven years. 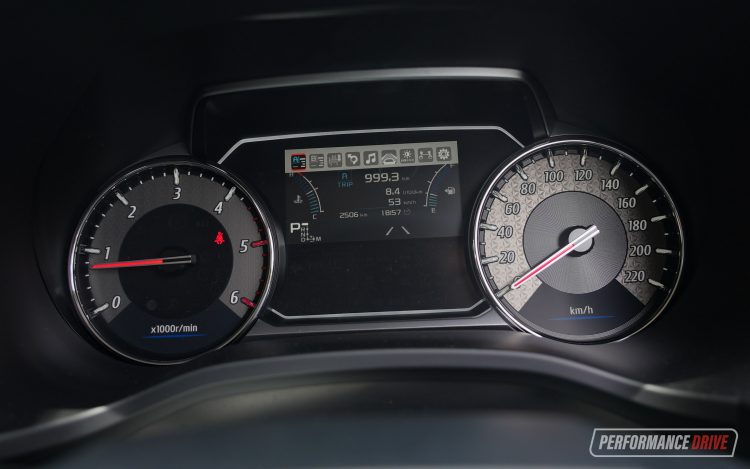 Under the bonnet, the same size 3.0-litre four-pot engine is used across the board. But it has been significantly revised resulting in power increases from 130kW to 140kW (at 3600rpm), and torque rises from 430Nm to 450Nm (between 1600-2600rpm). It gets a new engine block, cylinder head, crankshaft, lightweight aluminium pistons, intake system and variable geometry turbocharger. 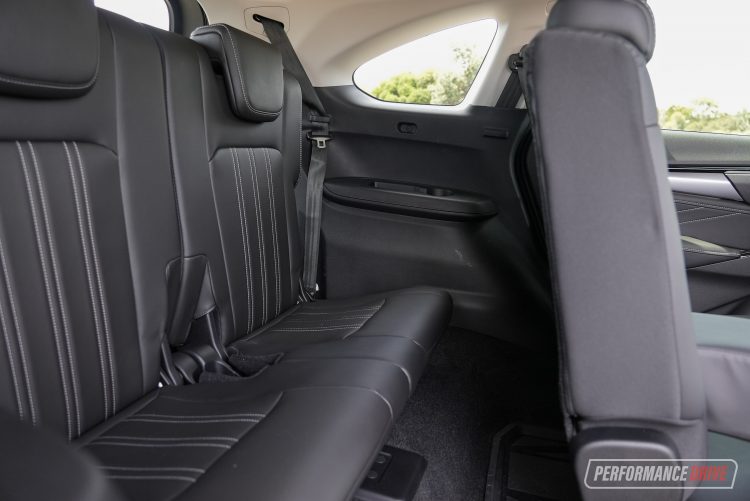 On the road, the engine feels confident in its acceleration rate with low revs, and strides along effortlessly with all that low-down torque. As with the previous model, this large four-cylinder doesn’t really like to rev. But now it doesn’t need to as much thanks to those output boosts. Going up steep hills with a load are a non-issue, as it pulls and holds onto the higher gears fluently.

The Aisin six-speed auto transmission feels smooth and rock-solid. It’s intuitive in finding the right engine spin for the conditions – on or off road. Though, an extra ratio or two would go a long way to aid in the new, highly commendable towing capacity of 3500kg. An extra cog might also reduce fuel consumption. 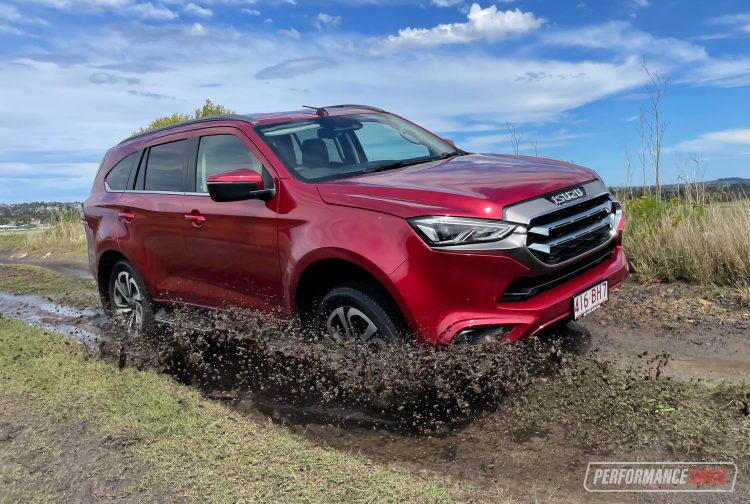 And speaking of a 3500kg braked towing limit, this blows the Mitsubishi Pajero, Pajero Sport, Toyota Prado and Fortuner’s towing capabilities out of the water, and is now on par with the Toyota LandCruiser and popular 4×4 utes. Even though the MU-X might be structurally capable of towing 3500kg, the gross combination mass of this LS-U, for example, is 5900kg. Minus the 2155kg kerb weight, and 3500kg trailer, and you’re left with only 245kg for passengers and cargo.

Sadly, the official average fuel consumption figure has increased on the 4×4 MU-X from 7.9L/100km to 8.3L/100km. Our average hovered around 8.5L/100km. Yes, it is a large capacity engine, and power has increased, but there is room for improvement in a world where a tank of fuel can be more expensive than feeding a family at a cheap restaurant. 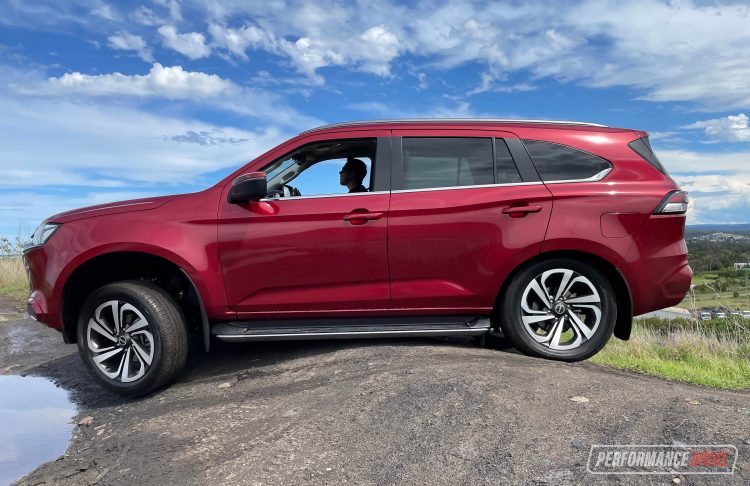 Thankfully, the fuel tank now holds 80L instead of 65L. It is now less of an issue for hard-core adventurers who need to go greater distances between refills. The theoretical average range is 964km, up from 823km.

The most noticeable aspect where the MU-X’s off-road allegiances are felt are in the suspension setup. It has long suspension travel for manoeuvring over boulders and ploughing through potholes. This means that on the tarmac, the ride is absorbent yet a touch firm.

Even though the MU-X shares the ladder frame chassis from the Isuzu D-MAX ute, the rear leaf springs are not brought across. The MU-X gets a modified rear-subframe to house a five-link rear coil-spring layout, which is now stiffer than the previous model to tolerate the increased towing capacity. 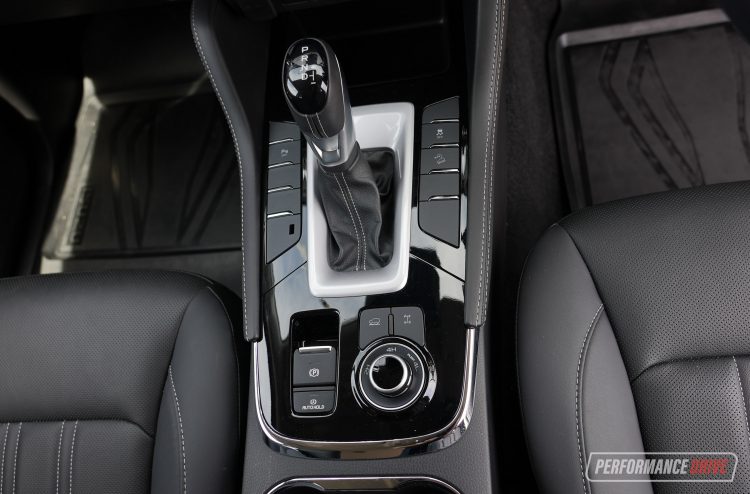 The front double wishbone suspension has also been updated with high-mounted upper-control arms, tauter springs, and a thicker anti-roll bar to lessen body roll. As a result, you can feel an improvement in dynamics and cornering on the road. Appropriately, it still exhibits a high steering ratio, where you need to turn the wheel more than the average car to get full lock. This is so it doesn’t fling around when going over large bumps off-road. But it can make the Woolies carpark a little exhausting, well, more than it already is.

One drawback for the MU-X is the lack of refinement in the driver assistant tech. For example, we found the lane monitoring momentarily cancelled and resumed for no valid reason. There were no notable lane or environment changes. The lane-keeping active feedback can also pull the vehicle pre-maturely, especially on long bends where it can detect a distant (curved) wall. It is not near as refined and seamless as other systems out there. 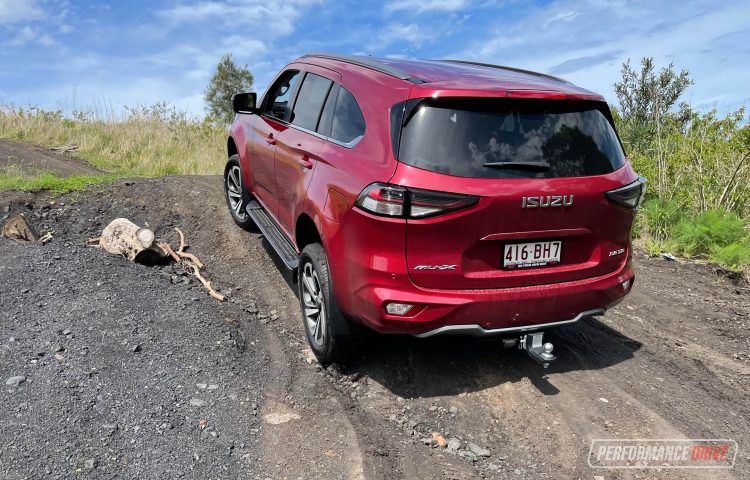 If you’re in the market for a durable, 7-seat off-road and towing performer that won’t break the piggy bank, the 2022 Isuzu MU-X is one of the best contenders on the market we think. The new generation builds on an already strong proposition, with technology and safety upgrades, snazzier looks, and more power.

If your lifestyle still involves suburban commuting, the MU-X can comfortably do that too. If only the multimedia system was designed better and the safety assist systems were more refined, we would not have anything negative to say about it, at all. Yet, it’s still a highly recommendable option.

PROS:
– Strong Isuzu build means truck-like reliability and off-road performance
– Interior space and practicality
– New exterior design looks modern, but not too out there
– Seating position is high and peripheral vision is excellent
– Increase in fuel tank capacity from 65 to 80L exclusively for the Aussie market