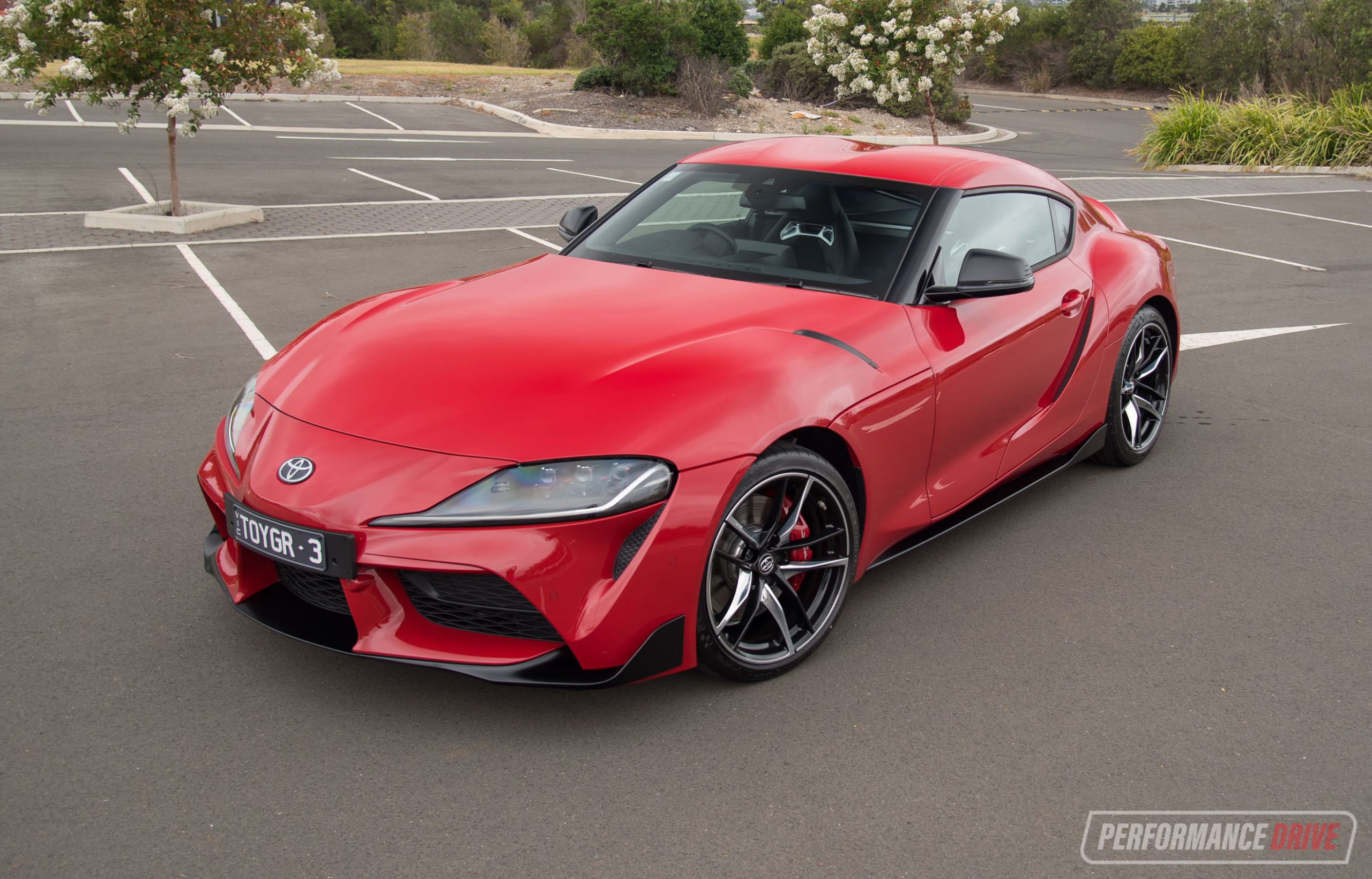 We all love power and always want more of it. So even though it has only been on sale in Australia for about 18 months, the Toyota GR Supra gets more power for the 2021 model. 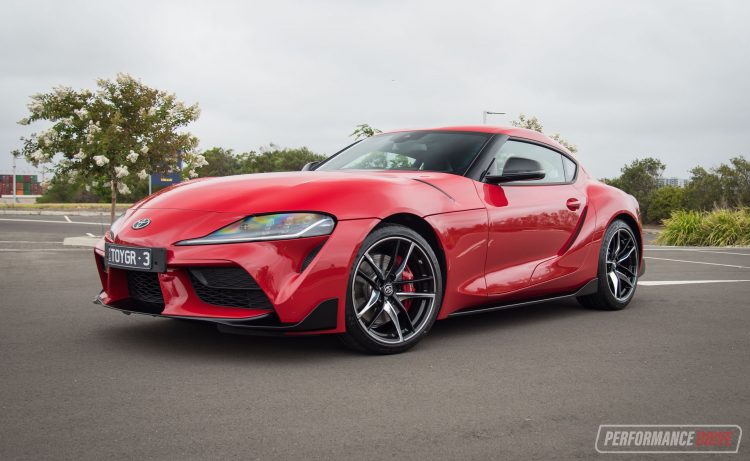 That’s right. The BMW-sourced 3.0-litre turbo inline-six is uprated – not that it needed it – from 250kW to 285kW, with 500Nm remaining unchanged from before. Some revisions are also made to improve handling.

It is an expensive car, but look at it this way, you save around $30k over the BMW Z4 M40i, which shares the same platform and powertrain. Both models are produced at the Magna-Steyr facility in Austria.

Toyota Australia sells around 10 examples of the Supra per month. And while that’s not many, it is more than what BMW achieves with the Z4, which is available in more trim levels and is offered with alternative engines. During the first two months of this year Toyota Australia sold 23 Supras, while BMW sold 8 Z4s. 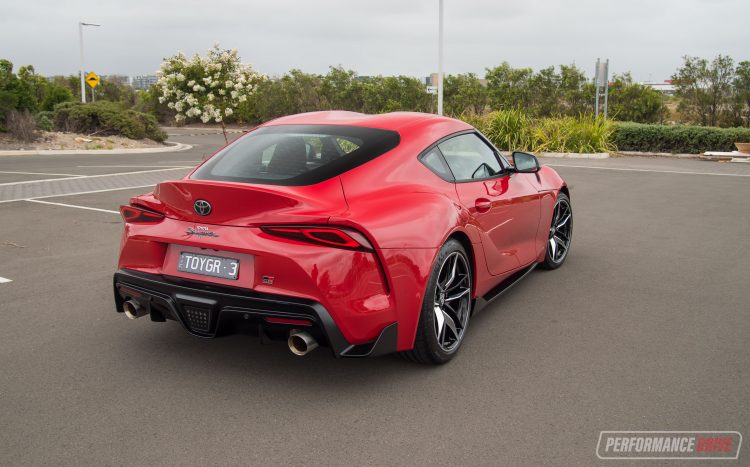 During our test we pulled over for some photos on one of our test routes and some cyclists rode past. One of them yelled out, ‘That’s just a BMW with a Toyota badge.” We’re not entirely sure but we think they meant it as a criticism. Which doesn’t make sense. You get BMW driving dynamics and inline-six power, but with Toyota’s renowned reputation for reliability and service, and a five-year warranty. We can’t think of a better combination for a mainstream sports car.

The cabin features elements from BMW and Toyota, although probably more towards BMW. For example, the media screen and its menu layout, the iDrive controller on the centre console, and the steering wheel do resemble BMW stuff. However, the rest of the dash and console is Toyota’s own design. We like the carbon fibre trimmings on the console, but the big buttress that runs along the driver’s side isn’t very Toyota-like at all. 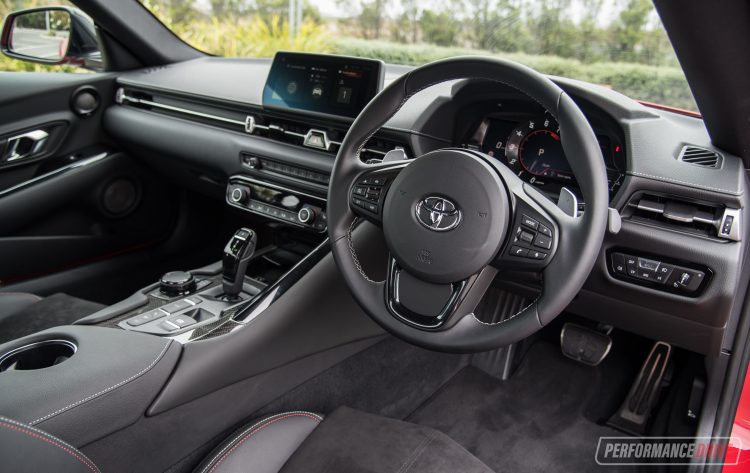 Toyota is usually known for practicality and everyday usability, whereas this beam is very intrusive. It means you have to reach around it to access the storage tray and wireless phone charger. But not only that, the beam makes you feel closed off from the dash fascia. Usually it’s the other way around, with the fascia skewed toward the driver.

You do get a couple of cup holders and very narrow door pockets for storage, and not much else. Instead, this is an intimate driver’s office. You feel cocooned in, sitting low and ready to drive. Fit and finish is excellent, with all panels and trimmings feeling well made. The buttons and controls also work with quality operation. 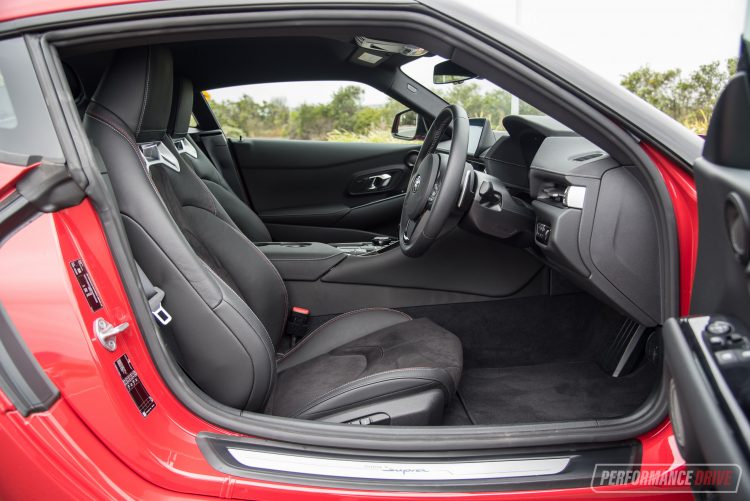 With not much storage space, there isn’t much passenger space either. This is a tight cabin. Ideal for average-height adults but we’re not sure how larger-framed passengers or really tall people would cope. And as no surprise, the boot is good for weekend travel and that’s about it. The specs say there is 296L of volume available. The boot floor is particularly high which leaves a shallow loading area. We love the two large speakers mounted on the bulkhead in the boot, though. Very fast and furious.

Going for the GTS over the GT adds 19-inch wheels (over 18s), red-painted brakes which now feature the Supra logo for 2021, along with a 12-speaker JBL sound system (GT gets 10 speakers), sports pedals, and head-up display as standard. To be honest, most of this stuff isn’t really needed as you’ll be too busy being entertained by the drive experience. 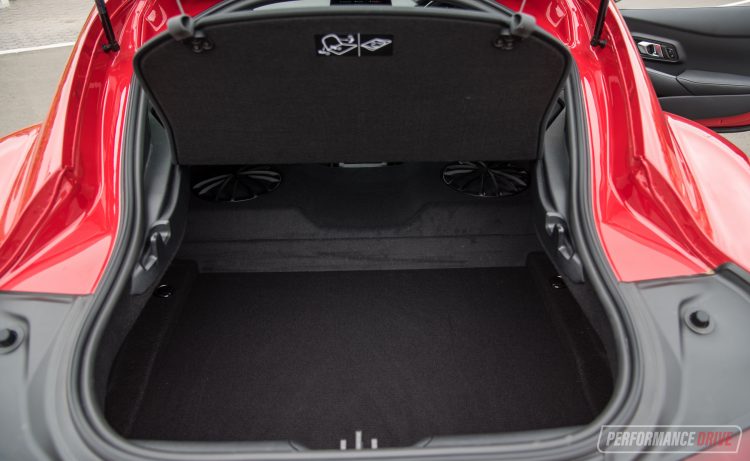 And what a drive experience it is. Around town you can enjoy the sweet bellowing sound of the seductive inline-six engine. It really is a beautiful soundtrack. The ride is pretty firm and fidgety, but you do get used to it, and the steering is silky and fluid so it just glides around the streets like an olympic ice-skater.

Head out into the hills and this becomes a truly brilliant little driver’s car. The handling is razor-sharp, almost too sharp at times. It points into corners with more eager than you, but the 255 front and 275 rear Michelin Pilot Super Sport tyres do an outstanding job of ensuring zero nervousness or squirmy attitude, no matter how abruptly you throw it in. 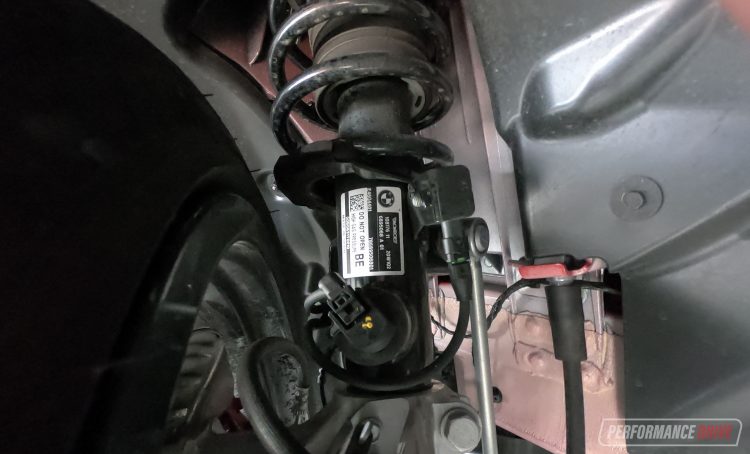 The BMW CLAR platform underneath, complete with BMW/Monroe suspension, is a wonderful package. There is no body roll, and although the ride might be firm in normal conditions, the tensioned character means harsh bumps have little impact on directional stability during hard and fast cornering. It just catches the bumps and remains totally composed. The platform provides a 50:50 weight distribution and a low centre of gravity, too, for optimum balance.

Of course, flick the traction control into its Sport setting – or turn it completely off – and the GR Supra dances like it’s in the Swinging Sixties. Toyota has added strut braces to the front end, like what has always been used on the BMW Z4 M40i. These increase rigidity to improve the agile feel. Some other revisions have also been made to reduce snap-oversteer. And it seems to have worked as you can drift this beast all day long. Although, it would happily do that before as well. A limited-slip differential continues in both GT and GTS. 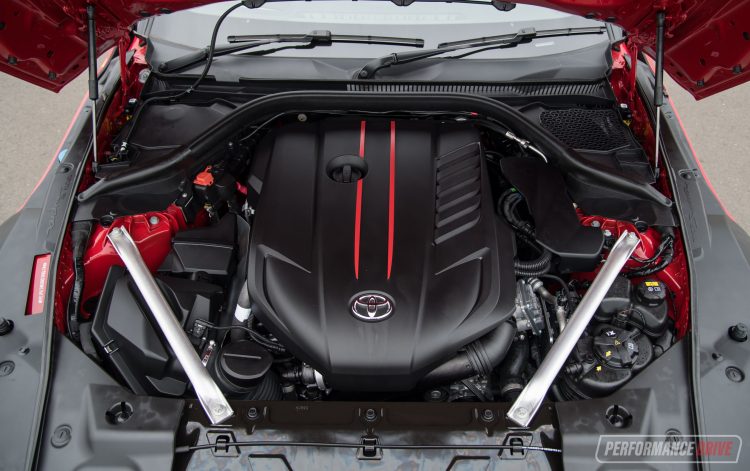 The biggest change for the 2021 model is to the BMW B58 turbo inline-six engine. It has been revised so now the compression ratio is 10.2:1, down from 11:1 for the initial 250kW version. This allows for increased turbo boost pressure. Some changes are also made to the exhaust manifold and engine computer tuning. As a result, peak power is now 285kW, spread between 5800-6500rpm.

Although peak torque remains at 500Nm, it is spread wider, shifting from the previous 1600-4500rpm range, to 1800-5000rpm. There was never a problem with torque delivery or its availability before, but now it feels even more at the ready. It’s almost like an electric car in that the torque is instantly available and the car responds in complete unison with the movement of your right ankle. 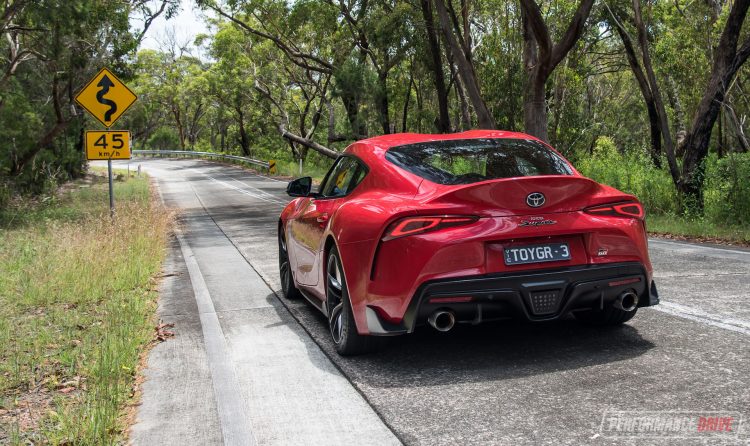 Interestingly, fuel economy is unencumbered by the increase in power. The official average is 7.7L/100km (same as before), and during our week of testing in mixed conditions (including highway driving and performance runs) the trip computer indicated 9.5L/100km. That’s really not bad at all given the awesome performance on offer. The power-to-economy ratio is also excellent. In fact, there aren’t many cars that produce around 285kW and chew 7.7L/100km or less.

Speaking of numbers, we conducted a handful of acceleration runs on a private road with our Racelogic Vbox Sport to see what sort of figures it could pull. Toyota claims 0-100km/h takes 4.1 seconds, down from 4.3 seconds in the 250kW tune. To refresh your memory, the best we saw in the 250kW version was 4.38 seconds (achieved in both the GT and GTS, exactly). 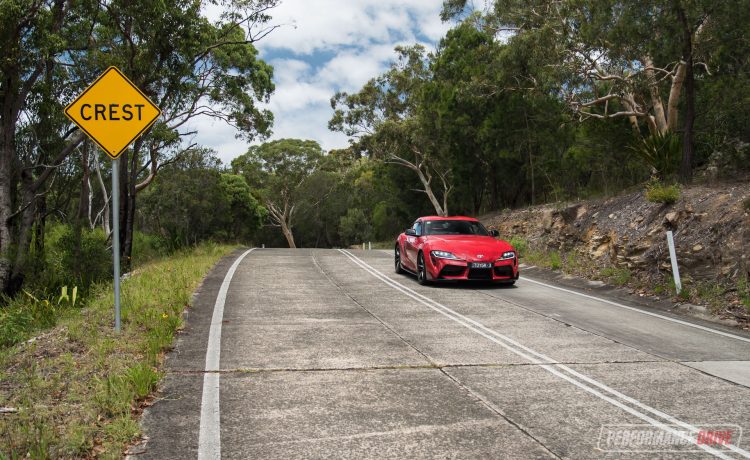 We still think this is a cracking design by Toyota. Reviving a classic is never easy, but this incorporates just enough of the old while introducing plenty of modern touches to keep it in tune with younger buyers. Now with 285kW, you couldn’t possibly need anything more for a fun, super-capable two-seat sports car. BMW driving engineering paired with Toyota’s reputation for reliability, and a five-year warranty. Our advice is to save $10k and go with the GT. It’s essentially the same car just without the fluff that you probably don’t need anyway.

PROS:
– Such a perfect engine/transmission for this car
– Solid handling, adaptable to both grip and drift driving
– Exterior design is an awesome modern retake on an icon
– Toyota 5-year warranty

CONS:
– Tight cabin with little storage for nick-knacks
– Digital instrument cluster has some empty space/lack of display modes
– GTS is expensive (save yourself $10k with the GT)