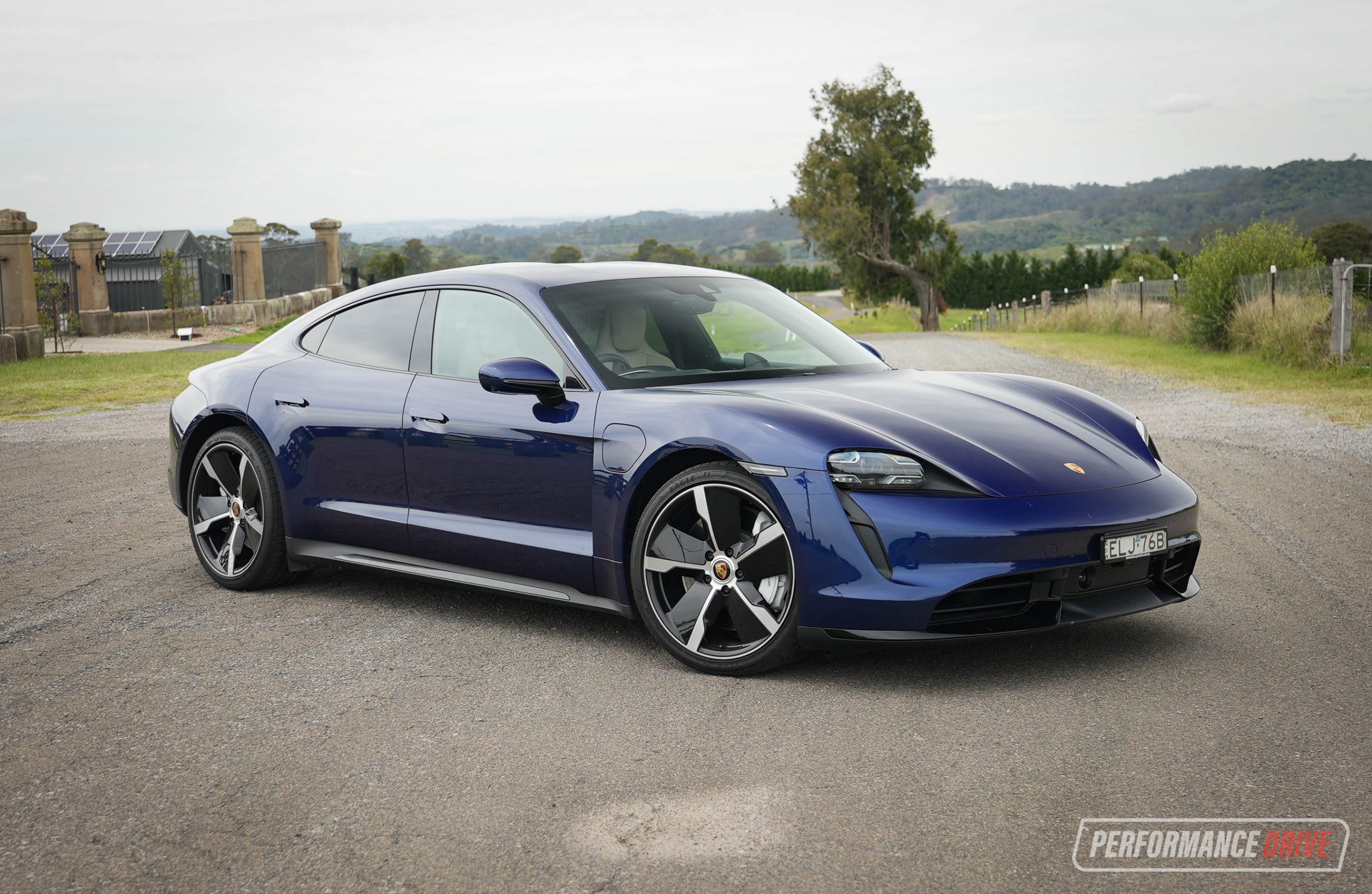 With such an extensive history building highly reputable driver’s cars and sports cars, Porsche has now turned its attention to the world of electrification. Does the new all-electric Taycan live up to the iconic pedigree, and in particular does the Turbo badge live up to its blasting grand touring reputation? 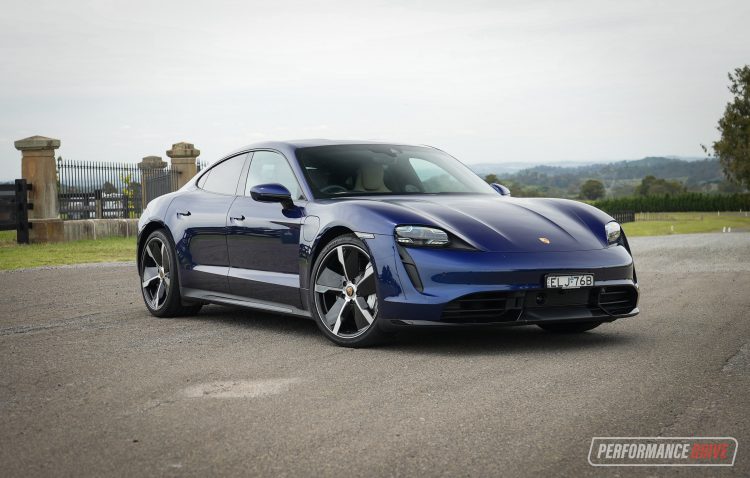 The Taycan is available in sedan and Sport Turismo wagon form, and in rear- and all-wheel drive configuration. Either way, all versions are fully electric and offer outstanding performance for its class, but only average driving range compared with their closest rivals. Range figures span from 365km and top out at just 434km.

Although this obviously does not feature a mechanical turbocharger, the Turbo badge is purely a signal of its pinnacle hierarchy in the showroom. Think of the name as more of an adjective, an active and buzzy word, a bit like some mens’ shavers and running shoes that are also called ‘turbo’.

Porsche also offers the Turbo S at the very tip of the range, which is what you go for if you really want to rattle your internal organs with intense longitudinal g-force. But even still, this Turbo offers a claimed 0-100km/h time of 3.2 seconds, which is similar to many Ferrari and Lamborghini supercars. The Turbo S does it in a claimed 2.8 seconds.

Prices are pretty steep, as you might expect. However, it seems like Porsche is not gouging buyers like many other carmakers who offer an electric alternative to a petrol model. For example, a top-line Hyundai Kona petrol is priced from around $42,400 yet the equivalent Kona Electric is priced from $64,400 – we don’t mean to single out Hyundai here, there are many other examples. 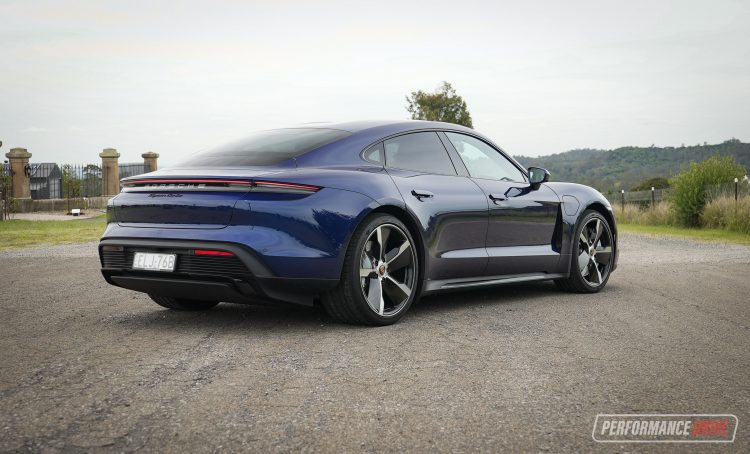 And that’s the way it ought to be in our opinion, especially considering electric vehicles are made with fewer moving parts than their combustion-powered counterparts. 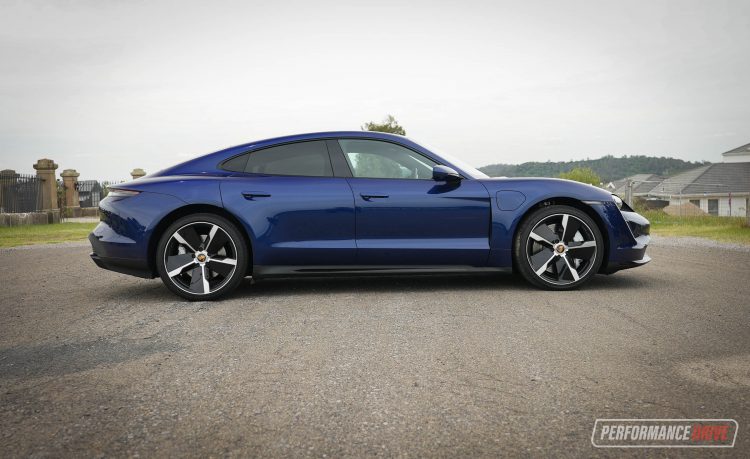 Firstly, the exterior design. It is beautiful, isn’t it? For an electric vehicle, too. While many carmakers like to create crazy futuristic themes with their EVs, this looks fast and sleek, and definitely carries through some Porsche DNA. We love that it looks very similar to the Porsche Mission-E concept car as well – a preview to the Taycan – from a few years back.

Buyers can go nuts with personalisation options to give it a custom look, and there are a range of different wheel designs and sizes, and a range paint colours. There’s also Porsche Exclusive options available as well. This example here is featured in the stunning Gentian Blue metallic (no-cost option), and shows off the 21-inch Exclusive Design alloy wheels ($7110). We must admit, this is probably the exact configuration we’d go for. It’s subtle but also demonstrates a stately prominence. 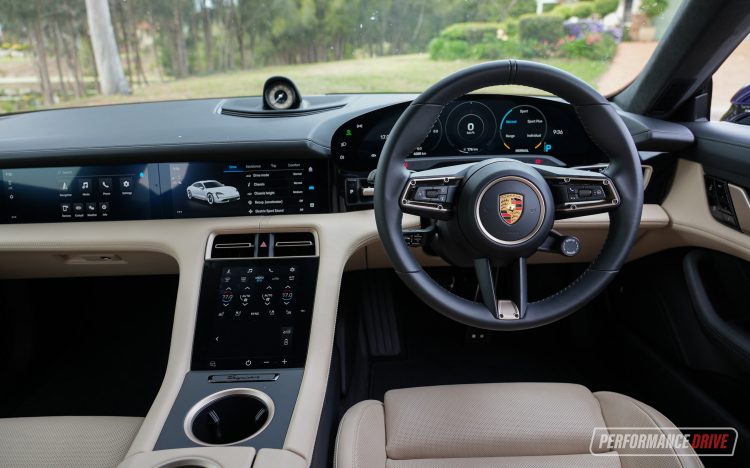 Inside, it is all very Porsche; clean, clutter-free, and driver-focused. The steering wheel sits perfectly at your chest, and the wheel itself is spot on in terms of size and design in our opinion. There are only the essential buttons and controls on the wheel, and we love the titanium/gold metallic trim which is spread thinly throughout the cabin.

Most of the console and dash are made up of digital screens, which definitely helps with that clean and clear environment character. However, the screens do get mucky pretty quick with fingerprints, so it’s probably a good idea to carry a microfibre cloth in the car at all times. The screens present crisp graphics, and menus and options are presented with brisk loading times. 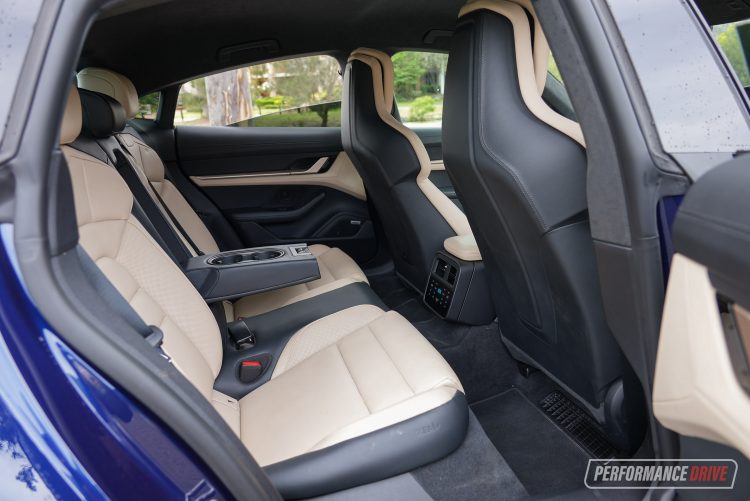 For some, the lack of colour and background animation might be disappointing compared with other systems on the market. But the reserved nature, we feel, reduces distraction and allows you to get on with driving. Likely Porsche’s intention.

Rear seat accommodation is good, with full climate control and sporty seats on the outside that actually provide really good lateral support. Legroom is decent on the sides but a bit tight in the middle due to a chunky centre tunnel (part of the ‘4+1’ seating pack option, from $1000). Headroom is also respectable for this style of car, certainly supportive of a business trip with four adults on board. 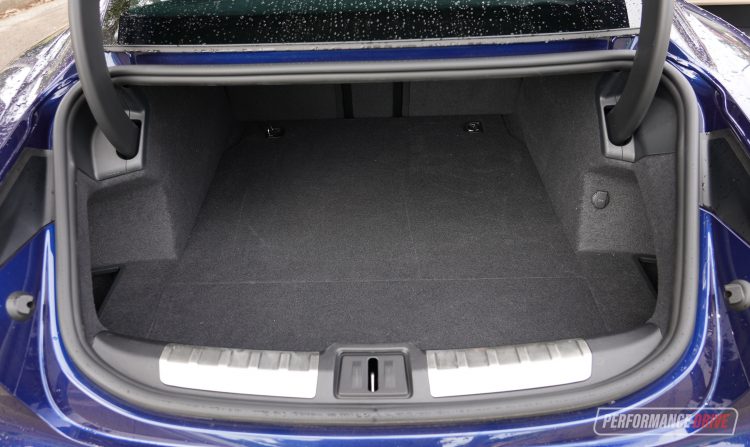 Being an electric vehicle means most of the electrical hardware is positioned under the cabin structure. And there’s an electric motor at the front and rear axle. So that means boot space is impacted to some degree. In the back, the space is pretty good at 366L, but the floor is quite high. As a bonus though you also get an extra storage bucket under the bonnet at the front, capable of carrying 84L worth of stuff.

With 450 litres overall, there is certainly enough space to pack for a weekend trip or to facilitate the weekly shopping. It is about a similar capacity to a premium mid-size sedan like a BMW 3 Series or Mercedes-Benz C-Class. 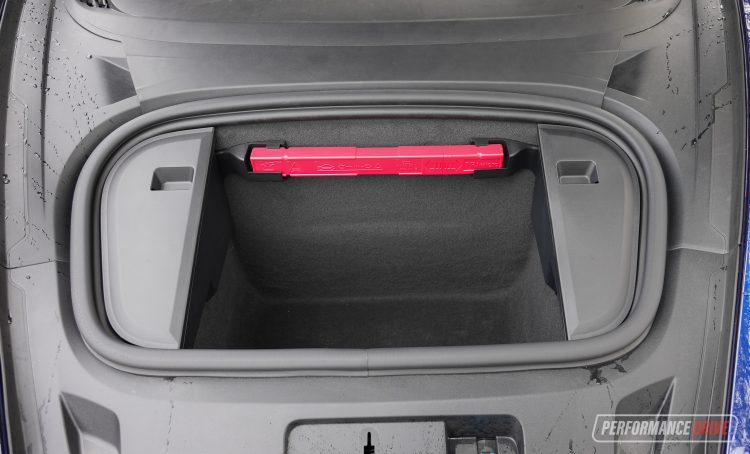 Power comes from a 93.4kWh battery which is optional on lesser variants, called the Performance Plus battery. This feeds a pair of electric motors that combine to develop 460kW and 850Nm, or up to 500kW during ‘overboost’. That makes it one of the most powerful Porsche road cars to ever hit Aussie showrooms.

Across the usual sprints our Vbox recorded 0-100km/h in a best of 3.16 seconds with launch control, and 3.26 seconds without it. And it’s a proper launch control system too, loading up tension on the brake and allowing you to catapult away like a cannonball. We also saw a peak g-force of 1.319g during these tests, which is just ridiculous for a four-seat road car. 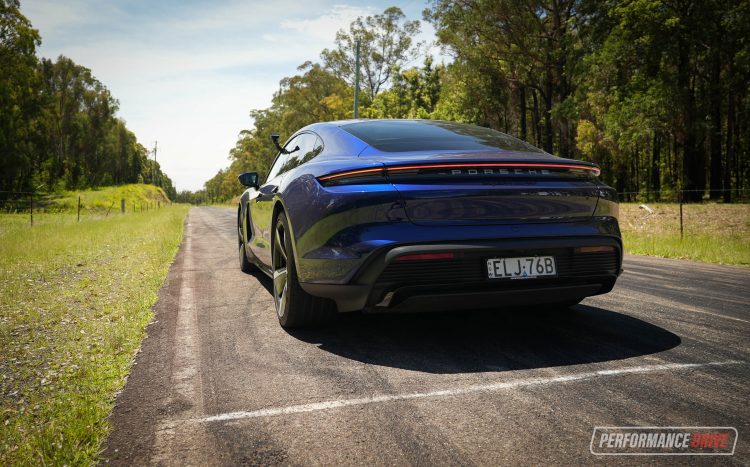 Going the other way, our Vbox recorded the 100-0km/h emergency stop in a best of 37.28 metres. Although the brakes are outstanding, offering excellent performance longevity and a consistent feel, we’d normally see a much shorter stopping distance in other Porsche models – around 34m or less. We suspect the 2305kg unladen weight plays a negative role here.

Those 21-inch wheels are wrapped in Goodyear Eagle F1 tyres, measuring 265/35 on the front and a whopping 305/30 on the back. The grip they provide is just awesome, especially straight-line traction with all of that power. Around corners the grip is exceptional as well. In fact, it feels like this thing is somehow bolted to the tarmac, as it is that solid and secure. 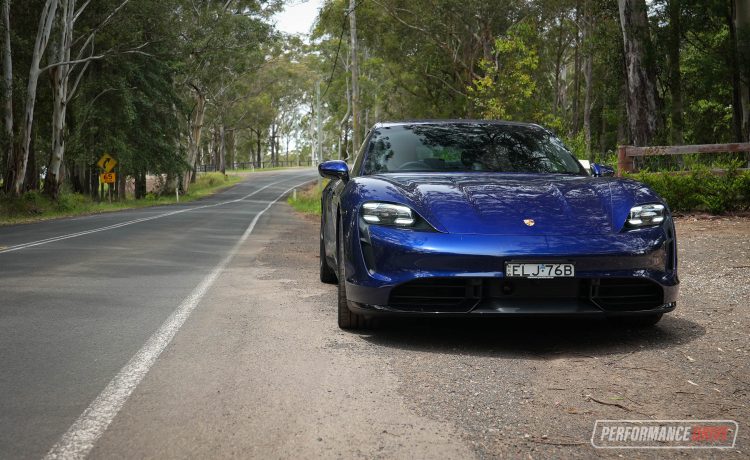 Faster-tempo switchbacks and tight mountain roads are not really a concern, even with all of that weight. But uphill is where you’ll experience the most fun, as that instant torque and clever all-wheel drive delivery results in effortlessly rapid corner exits. You can poke it into a tight corner, see that it’s clear, and then just punch it straight out. No other petrol Porsche is able to provide such relentless response quite like this.

With the standard air suspension the ride quality is amazing. We can’t remember driving another car (not SUV) that is able to soak up the bumps with such compliance and reassurance. At times it feels like it is going to bottom-out, but it never does. Instead it seems like it runs through its compression span and tightens up near the end. 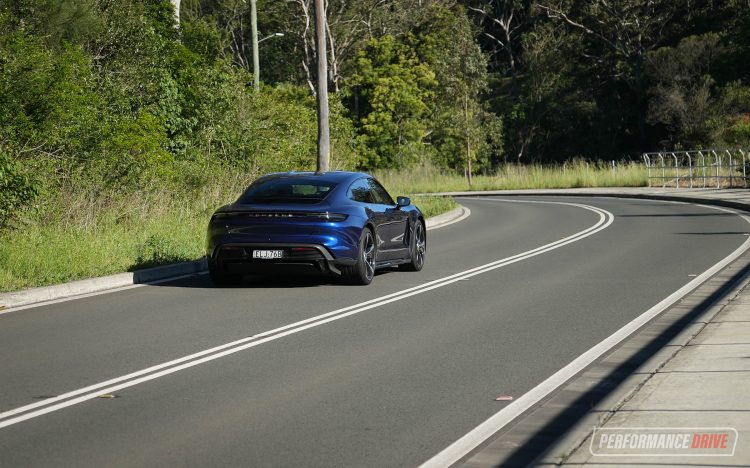 We enjoyed our time with the Taycan Turbo and S at The Bend Motorsport Park during the official launch event earlier this year. But in all honesty, mountain roads and out in the country is where this really shines. The instant torque creates a new dimension of fun and interaction, and the weight isn’t as much of a concern when you’re not hunting absolute lap times. Of course, luxury touring is extraordinarily blissful too, because it is very quiet and smooth, backed by that lush ride.

When it comes time to recharge, the Taycan offers two charging ports on either side of the car. There’s a Type 2 and a CCS2 – a great idea that other carmakers should employ. There’s an 800V electrical system involved, but it can be recharged using the on-board 150kW DC charger at public stations at 400V. Like any other electric vehicle, we feel like most of the problems with charging are to do with the local infrastructure, which just isn’t there in Australia. Charging times could also be significantly reduced to help improve overall practicality.

You can have a wall box installed at home though which would allow you to keep it topped up every day. The official 420km range figure seems fairly accurate to us, and even after numerous acceleration runs the range does not drop as quick as you might expect. In fact, we’ve seen the fuel gauge in petrol performance cars fall much quicker when adopting a similar driving style. 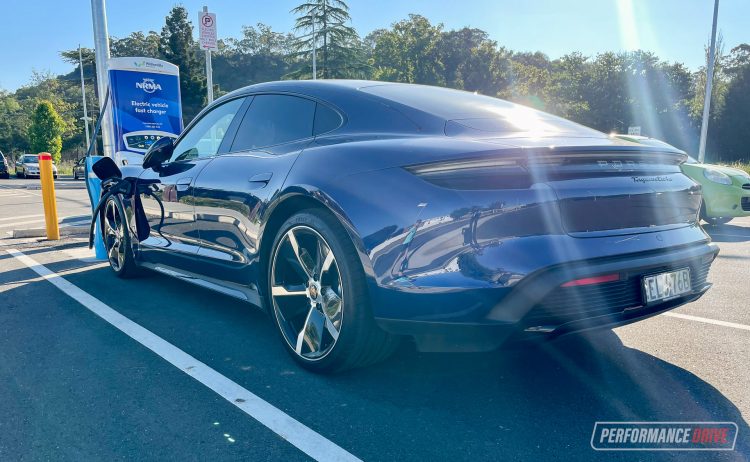 Well, this is how you do an electric sedan that blends performance, genuine driver engagement, and astonishing ride and handling. You can definitely feel the Porsche DNA through the steering and rock-solid build quality, and it looks superb from any angle. It is the best EV in this space in our opinion. Our main criticisms include the comparatively low range figures against some rivals, the heavy weight, and of course the lack of engine sound (although this does produce an interesting/futuristic whir in the sport modes).

CONS:
– Range figures are not as good as some rivals
– Heavy compared with petrol equivalents in Porsche showroom
– Pricey options