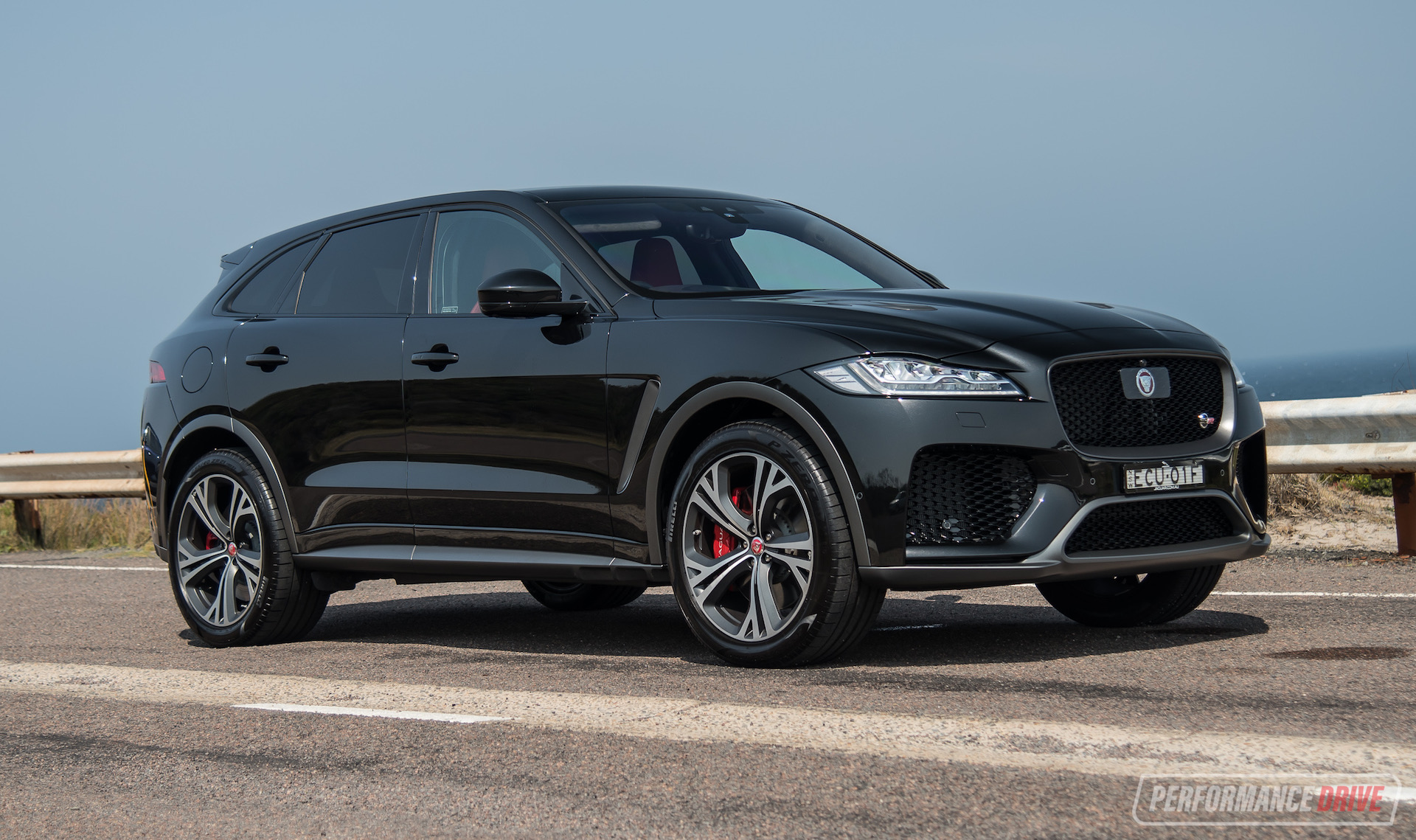 It might be categorised as a ‘soft-roader’, but forget that. There’s nothing soft about this beast. It’s called the Jaguar F-PACE SVR, and, in short, it is the most powerful mid-size SUV on the new-car market in Australia right now. Staunch, menacing, and with a troublemaking soundtrack. This cat is flexed and ready to pounce on its prey. 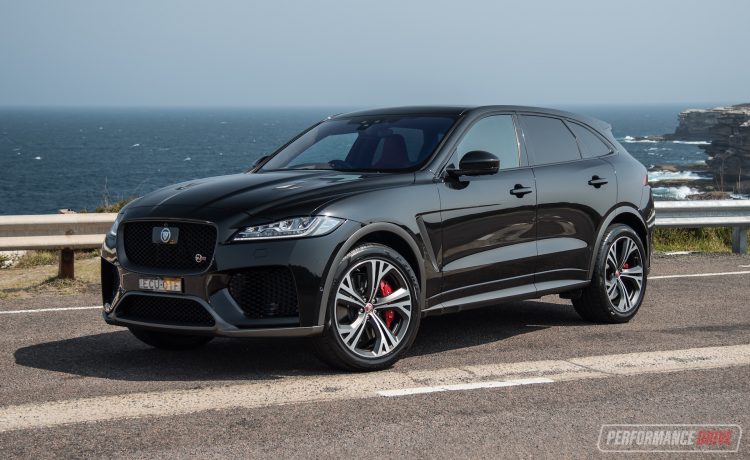 Jaguar claims 0-100km/h comes up in 4.3 seconds, which, surprisingly, isn’t the quickest claimed sprint time in this club. In order of the aforementioned rivals the 0-100km/h sprint times are 3.8, 4.2, and 3.8 seconds. For the official claims anyway. Even so, the SVR is the quickest Jaguar Land Rover SUV currently available.

The SVR sits very much at the top of the F-PACE range, engineered by JLR’s Special Vehicle Operations (SVO) division. Technically, it isn’t a limited edition but it is a special build that is likely to exist as a low-volume and thus rare production model. Prices start from $140,020. That makes it the most affordable out of the SUVs we’ve mentioned above; from $149,900, $157,900, and $164,600, in alphabetical order (as listed above). 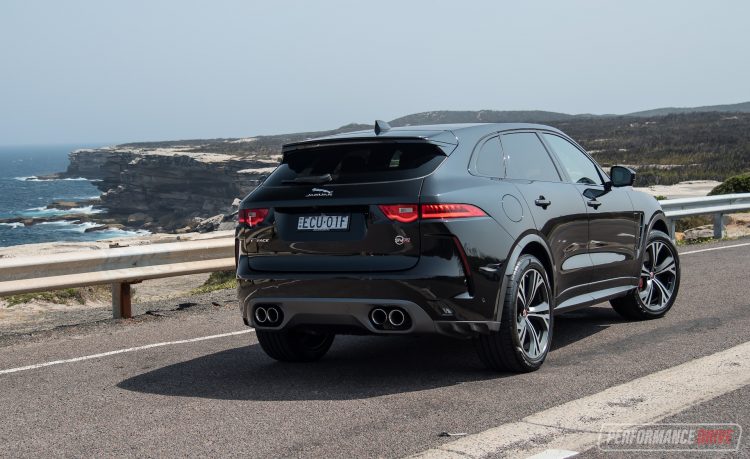 It’s a bit of a beauty and a beast, this thing. On one hand the F-PACE is one of the most stylish and beautifully-designed SUVs in the class, and a work by industry-renowned designer Ian Callum. But in SVR guise there are plenty of muscular and edgier tones to give it a tougher and perhaps less elegant presentation.

We love the view from behind, in particular. At first you might not notice much difference compared with the regular F-PACE. But at the back you’re immediately struck with the quad-outlet exhausts and the awesome vertical slits in the sides of the bumper bar. Some racy fins hide discreetly under the lower corners, too, adding flair. 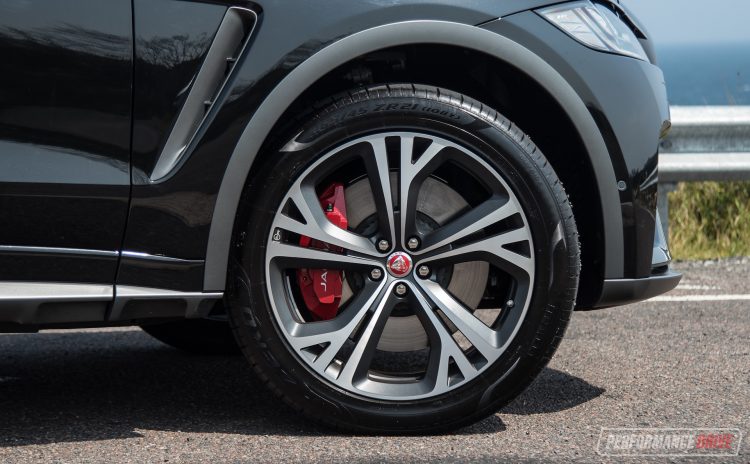 Compared with the regular F-PACE the SVR’s body features functional vents in the front guards just behind the front wheels. These help to reduce lift at speed, Jaguar says. Heat-extraction vents – that really do go through to the engine bay – are placed within the bonnet, and there’s a bespoke rear spoiler mounted up near the back of the roof which helps to enhance aerodynamic efficiency. Topping it all off are a set of special 21-inch forged alloy wheels that wear super-fat 265/45 front and 295/40 rear Pirelli P-ZERO tyres. You can also option for 22-inch wheels if you like.

Ordinarily, we wouldn’t recommend opting for a red interior. On any car. But here, with the black exterior and black interior highlights, the contrasting red adds a distinct fiery character which seems to pair well with the SVR’s threatening, venomous personality. In the front are a pair of lovely SVR bucket seats that cradle you perfectly. These are electronically adjustable and you can easily find a natural and comfortable driving position, like in all modern Jags. 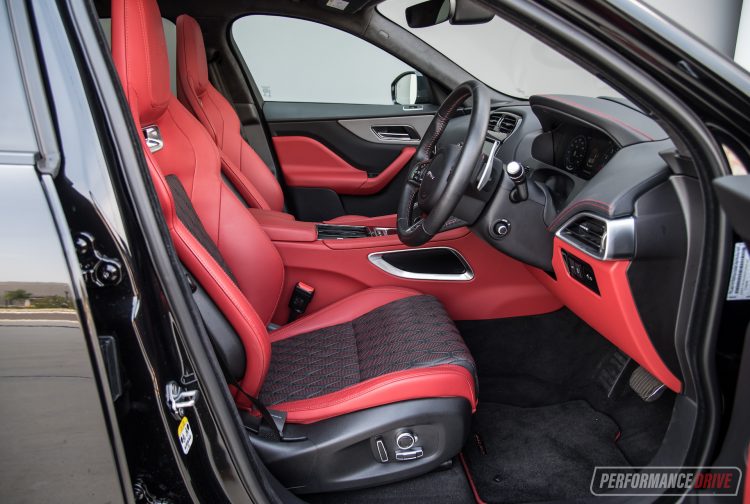 We do find the A-pillar on the F-PACE a little intrusive as you step in. It’s low and spears toward you, especially compared with other, more-upright SUVs in this class. You also sit quite low down in the cabin and the dash and centre console wraps around you, making you feel submerged. That, along with windows that seem short, including the windscreen, mean visibility can seem confined. It almost feels like you’re driving around in one of those classic ‘chop-top’ hotrods. Well, it’s not as bad as that but it isn’t quite as practical as most rivals in these specific departments in our opinion. On the contrary, you do get that swooping and sexy exterior profile.

Rear passenger accommodation is very good. There’s plenty of legroom and headroom is decent for this class. The centre driveline tunnel doesn’t rise up and sap heaps of middle-seat legroom, either. In the SVR, rear passengers are treated to outer seat heaters as standard, climate adjustments and three different power ports for charging devices. Even though they aren’t as aggressively bolstered as the front seats, the mildly contoured rear bench does provide some lateral support for the outer passengers. And that racy red and black upholstery is carried through. 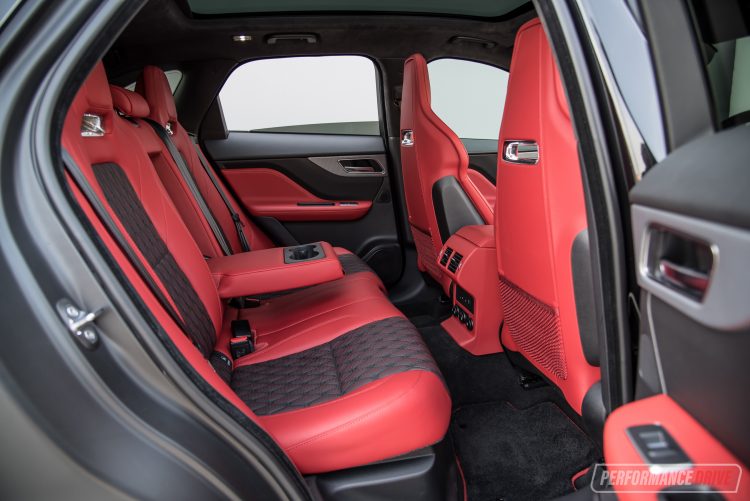 Boot space is rated at 508L in the default seating layout, which is slightly down on the class benchmark of 550L. If you fold down the rear seats, which can be done from the boot area, you open up 1740L, which is more than many rivals. Adding convenience is a 12V power socket, tie hooks, and a netted pocket for smaller items. There’s also a lift-up floor compartment that hides the space-saver spare wheel. 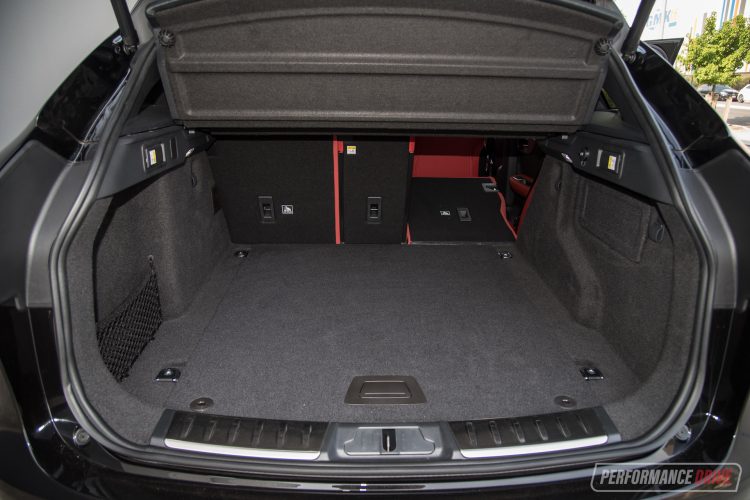 Obviously the main attraction to the SVR is that throbbing, monster of an engine. As standard the SVR comes with a bi-modal exhaust, however, if you flick it into Dynamic mode or if you give the accelerator pedal an enthusiastic prod, the pipes automatically open up to produce an almighty bellow. It’s almost too loud in this mode, even for us revheads.

And the note that comes from the tailpipes is dirtier than that film featuring two girls and one cup. Low down you get a deep, gargling character (from the exhaust, not the film), and then higher up in the revs it turns into a metallic, jackhammering machine gun. It’s crazy. Take a listen in our video below. 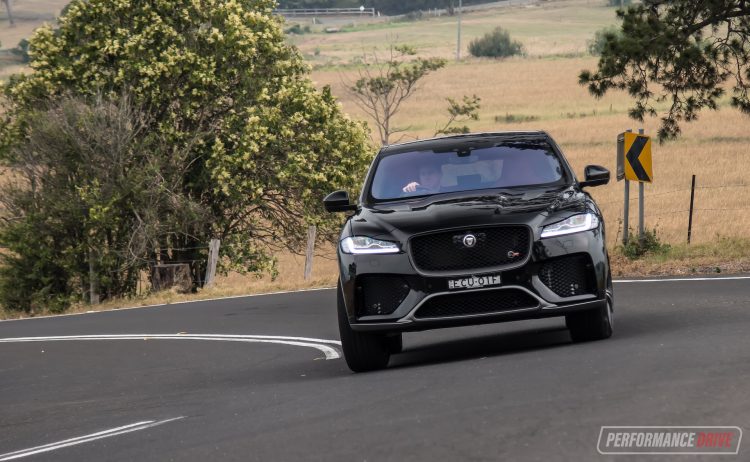 The performance that coincides with all of that noise is astonishing. On full throttle it feels as though you’ve just stepped on a bomb, catapulting you forward with huge g-force. And it keeps rocketing relentlessly until you’re able to come to your senses and release the pedal. Across the 0-100km/h sprint, our Vbox showed a best result of 4.37 seconds, which is pretty much exactly what Jaguar claims (4.3). On our usual private road we also recorded 0-200km/h in 14.25 seconds, with the quarter mile coming up in 12.42 seconds at 187.9km/h. These are some very serious times, especially for the real world and for a luxury SUV.

It’s not just about straight-line speed, though. Being a hardcore performance SUV and one developed by SVO, you can push the SVR hard around corners. It’ll even oversteer if you try hard enough. Tight switchbacks are its weakest link, with some heaving sensations felt from behind the wheel. You might argue that this is to be expected for a 1936kg vehicle, especially one that showcases a top-heavy SUV centre of gravity compared with a dedicated sports car or sports sedan. However, we have driven some similarly-weighted rivals and they don’t quite feel this heavy behind the wheel. 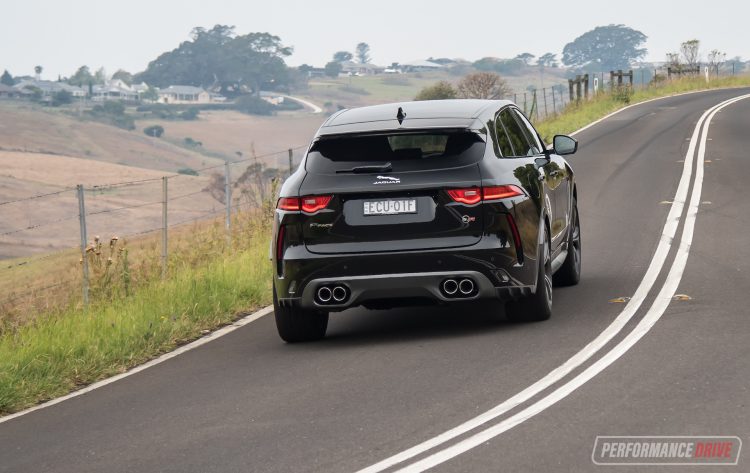 Faster-paced sweeping bends feel more at home in the SVR. It leans in a little bit and then just holds, absorbing bumps along the way without disrupting the balance or precise direction. You can play around with the driving modes for some versatility, and even create a customised mode by mixing and matching different settings for different control areas. For example, you can have the engine in Dynamic mode but switch the suspension to the Comfort setting.

And that brings us to the F-PACE SVR’s best trait (aside from the engine); the ride quality and composure. Despite being a hardcore performance SUV, Jaguar engineers, or actually SVO engineers, have done a wonderful job of walking that fine line between offering a high level of cornering agility while maintaining excellent ride comfort and compliance. SUVs that are more agile than this are simply more uncomfortable, in other words. 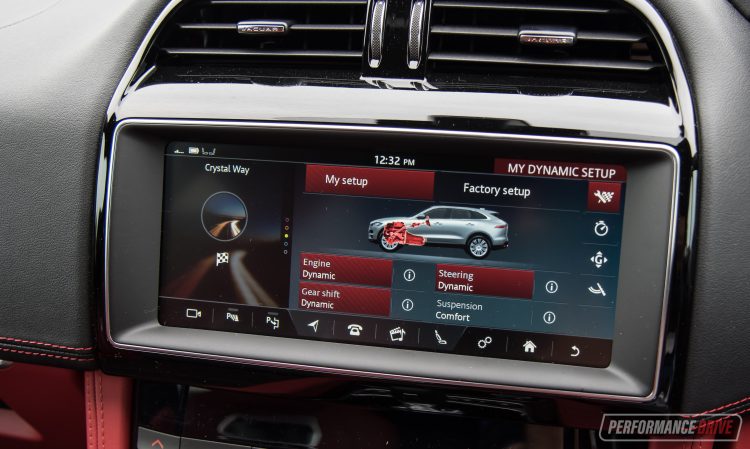 And that brings us to a very good point we’d like to make. While many performance SUVs try too hard to be sports cars and try to handle like their performance sedan counterparts, resulting in very firm suspension but still not quite offering the driving calibre of the lower-riding cars, the F-PACE SVR seems like more of a laugh.

And we mean that in a good way. It doesn’t take itself too seriously. You get a wild, animalistic V8 engine with loads of power and excitement – and fun – but with very little sacrifice in luxury or comfort. The SVR will happily cruise around at a leisurely pace and perform normal premium SUV duties.

This is a beast of an SUV. It really is. You won’t find anything in this class that offers more power. Yet, what we love most is that it’s still a modern Jaguar. That is, you get a beautiful and distinctive design, classy interior, and a smooth drive experience with a comparatively comfortable ride.