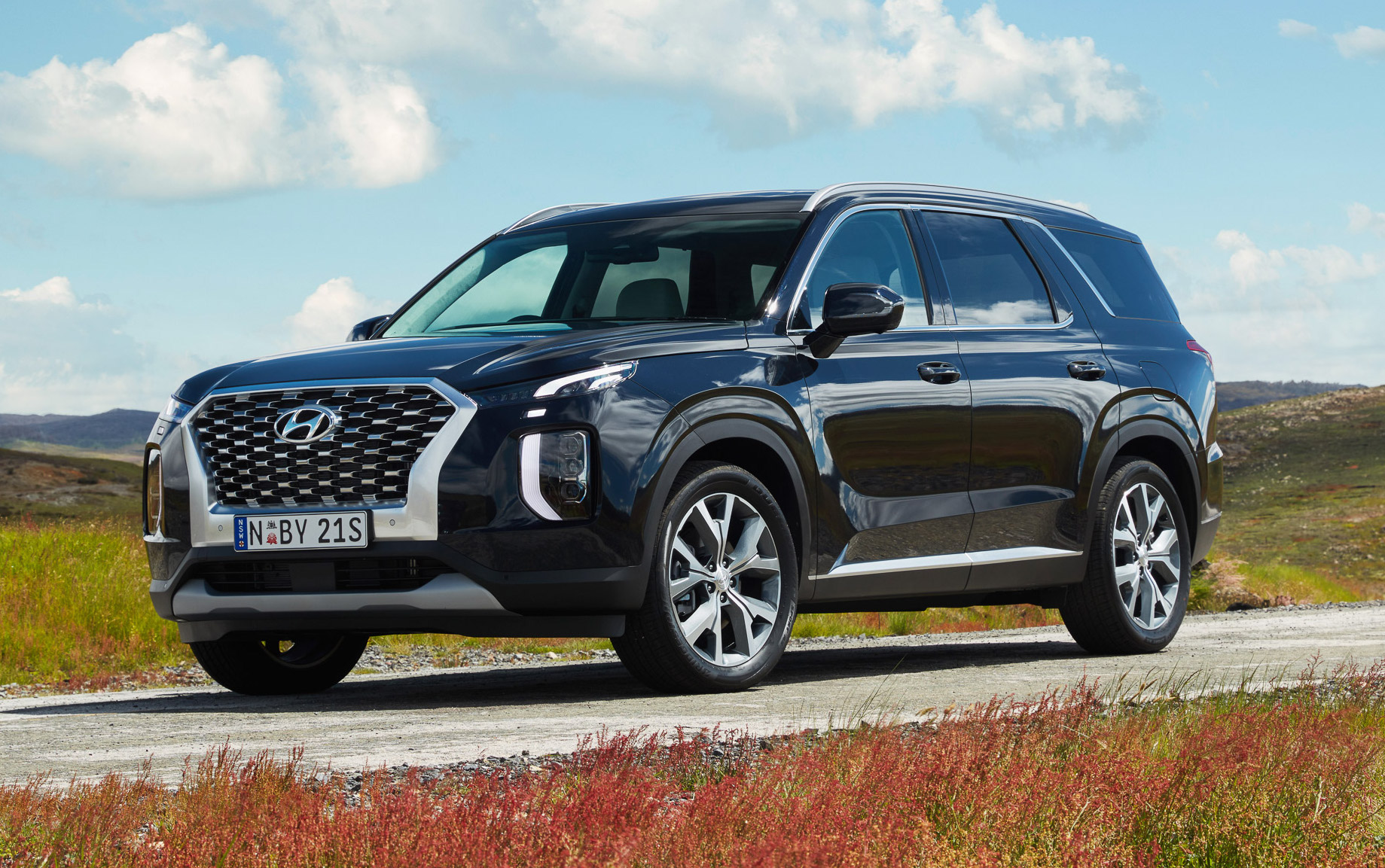 You might be thinking, why is Hyundai Australia launching the Palisade when it already offers a large, 7-seat SUV with the Santa Fe? Is bigger actually better? 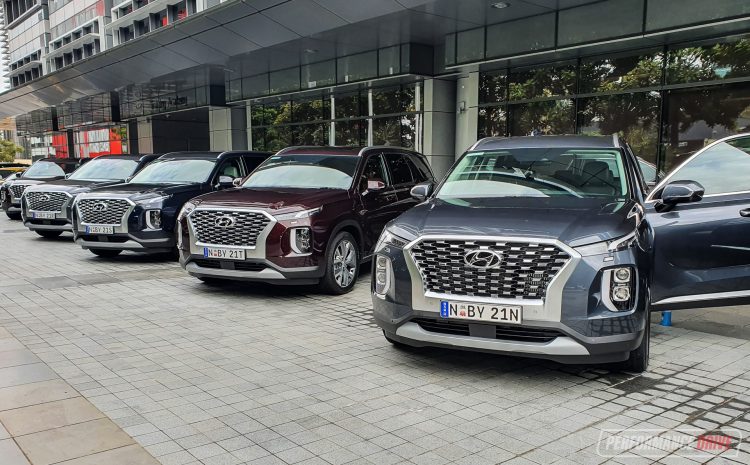 According to November VFACTS new vehicle registration figures, large and upper large SUV segments are coping very well so far in what has been a terrible year. For example, the overall market is reporting a 16.1 per cent decline in sales across the 11 months. And most segments are seeing similar drops. However, the ‘SUV upper large below $100K’ category (Toyota LandCruiser/Nissan Patrol) is actually up 5.0 per cent, and the ‘SUV large above $70K’ class is seeing a drop of only 2.8 per cent. For perspective, the very popular ‘SUV medium below $60K’ class is reporting 12.6 per cent decline.

Even if you say you find big SUVs vulgar and pointless, we all secretly love them. Deep down, as if you wouldn’t enjoy pulling into your driveway in a Cadillac Escalade or a nice big Range Rover. The sense of superiority and confidence, even if false, just makes you feel so good behind the wheel. There’s also the benefit of added comfort and luxury purely from the sheer size of the cabin. But whatever argument you might have against them, big rigs are clearly what buyers want.

So, to fulfil demand, Hyundai is offering four versions of the Palisade, alongside the Santa Fe in the same below-$70K segment. There’s the standard and the Highlander. Both of these can be had with either a 3.8-litre petrol V6 producing 217kW and 355Nm, or a 2.2-litre turbo-diesel four-cylinder that generates 147kW and 440Nm. The V6 is front-wheel drive and the diesel is AWD. Prices start from $60,000 for the standard petrol, and from $71,000 for the Highlander petrol. Add $4000 to access the diesel in each trim level. 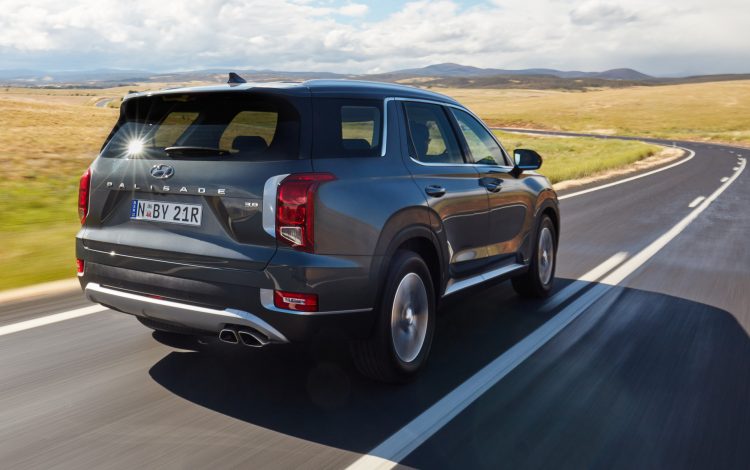 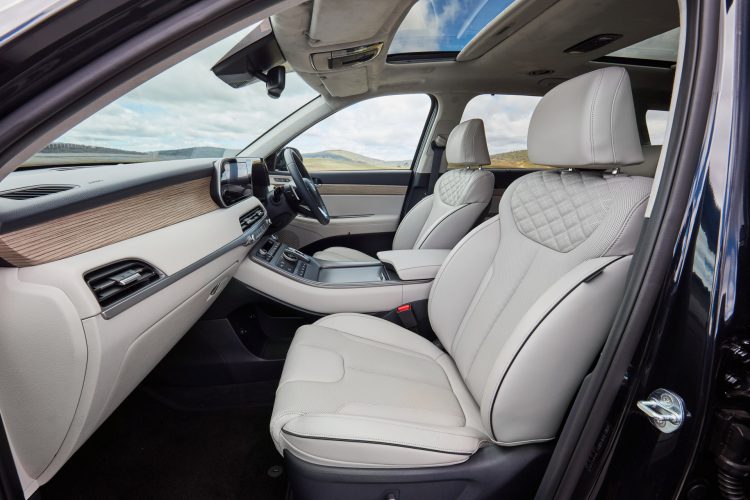 The Palisade isn’t a brand new model. In fact, it’s been on sale in select overseas markets since late-2018. So it shouldn’t come as a surprise that it’s based on the outgoing Santa Fe platform. There are some dimension changes though, obviously. Compared with the outgoing Santa Fe the Palisade is 210mm longer overall, with 135mm of that in the wheelbase. It’s also 85mm wider and 45mm taller. Not that either of them are primarily designed for off-roading, the Palisade also presents 18mm of added ground clearance (203mm in total).

All of these dimensions are pulled closer together with the launch of the mostly-new 2021 Santa Fe, arriving next week. It jumps to a new platform that makes it 15mm longer and 10mm wider than the outgoing model. But, again, that uses a newer platform while the Palisade remains on the older layout. Even with the larger dimensions, the new Santa Fe will sit in the market as the slightly littler, albeit more modern, brother to the Palisade. 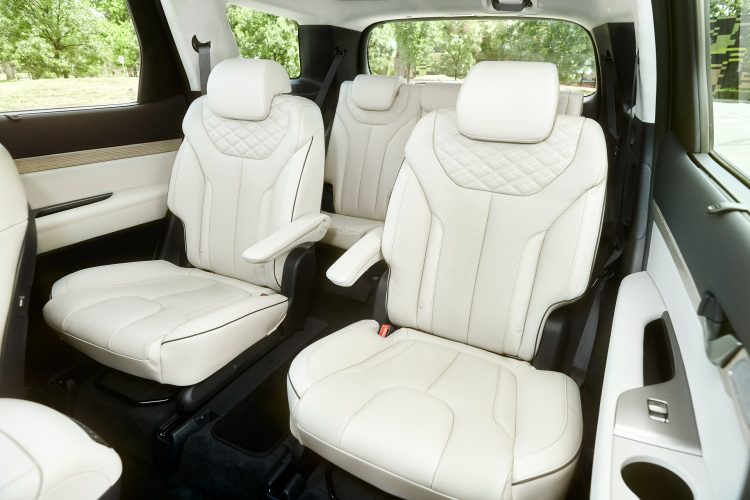 There is no shortage of space inside, as you would expect. It is massive in here. The general freedom to move about is excellent, and buyers can option for either seven or eight seats. Opting for seven introduces two captain’s chairs for the second row, while the third row is three-across in all. Regardless of which configuration you go for all three rows feature climate vents in the ceiling, USB ports, and more than enough cup holders for every passenger. If you have a big family, this certainly keeps everyone well catered for.

Up on the dash is Hyundai Motor Group’s latest 10.25-inch touch-screen media interface. So that’s a nice touch considering the age of this vehicle isn’t technically in line with the company’s latest generation technology. It offers all of the usual apps, including Android Auto and Apple CarPlay, and both variants feature a thumping 12-speaker sound system by Infinity, along with digital radio, and in-built sat-nav with live traffic updates. We love the sharp graphics on the screen and the menu functionality is fairly intuitive. It is a bit of a stretch to reach the screen, although there is a widely-adjustable driving position, including a power seat on all variants. 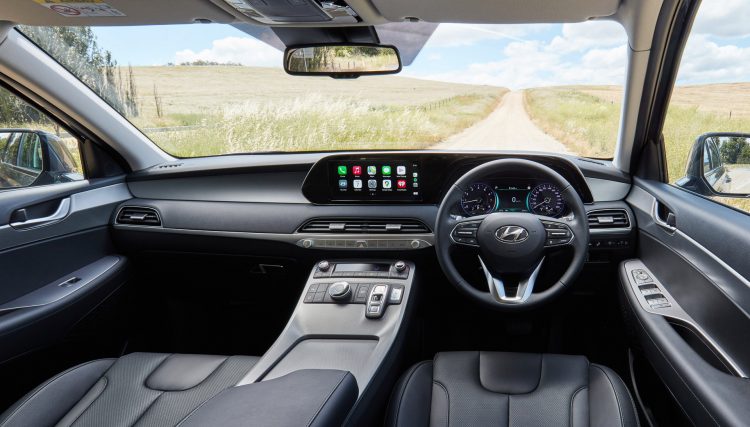 The instrument cluster is showing some age, with just twin mechanical dials and pretty basic font and so on. There is a sizeable digital screen in the centre for the trip information, which does help to claw back some level of modernity. From here you can toggle through various displays using Hyundai’s very easy steering wheel-mounted controls.

With buttons for gear shifting control, the centre console definitely looks modern and almost like an electric vehicle. These are presented on a raised up section of the console, which essentially becomes the lower dash fascia. Storage space around here isn’t that great, but then you do have a huge central cavity with pop-out cup holders and a big arm rest storage box to utilise. 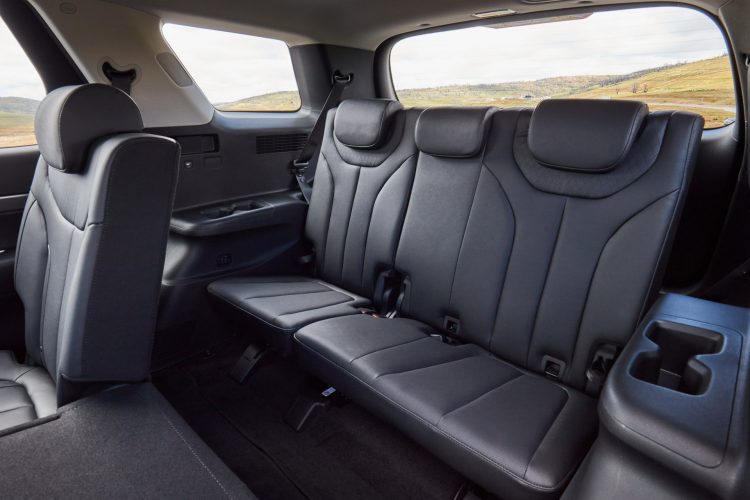 Passenger space is really not an issue, in any row. The second row is adjustable for slide and recline, and each door features two cup holders and a bottle holder. Accessing the third row is made easy thanks to a one-touch button which tilts the second row forward and frees up the slide action. Third row space is at the top of the class, and there’s even recline adjustment here too.

With all of this passenger space, one might expect nothing left for cargo. Well, that’s not the case. Even with all rows up you still have 311L to play with, along with a 12V socket conveniently in the boot wall. A special under-floor pocket houses the pull-out security blind for when you’re only using two rows of seats. 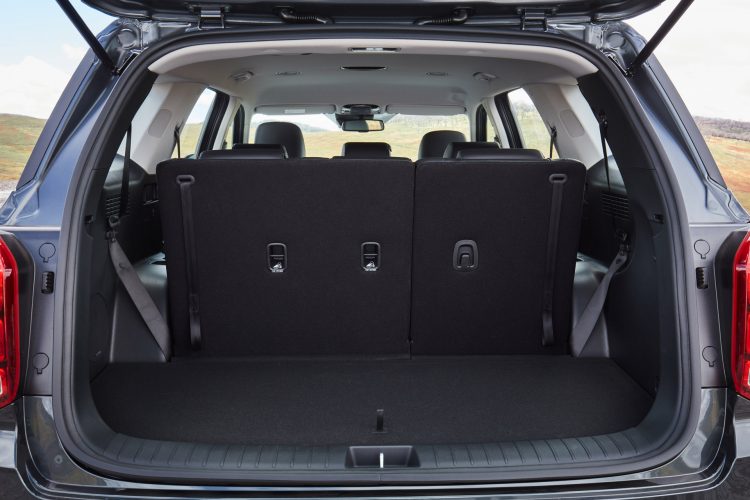 Out on the road we had a chance to sample the base model and the Highlander in diesel configuration, but unfortunately we didn’t get a chance to sample the V6. If the V6 in the Santa Fe is anything to go by, we suspect here the unit is very peaky and rev-happy. A great engine on its own, but perhaps not best suited to carting around the family.

In that sense, we think opting for the diesel is a no-brainer. That 440Nm of torque really comes in handy when lugging around such a large outfit, and probably more so if filled with stuff. We suspect the surging low-end torque is more handy than the top-end power in the V6, too. What’s also impressive is that the official fuel consumption average for the diesel is just 7.3L/100km (V6 is rated 10.7L/100km). That’s actually less than the outgoing Santa Fe AWD diesel (7.5L/100km). Part of the difference is thanks to it being slightly lighter in weight compared with the outgoing Santa Fe (about 45kg lighter). 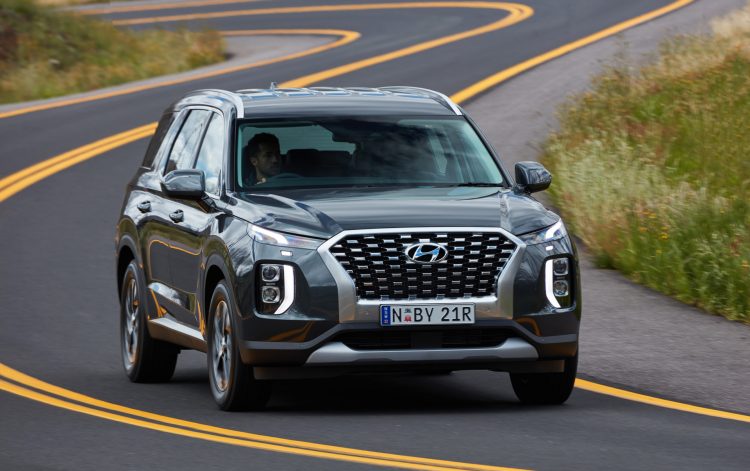 Now, we must admit, we thought the drive experience was going to be like sitting on one of those spring-rocker toys you see at the playground. But genuinely, Hyundai engineers have done extremely well to minimise body movements and suppress any of that uncomfortableness you often experience when driving a big SUV down some bends. It feels good, and it turns in with appealing enthusiasm. It’ll change directions with decent hast, and it doesn’t seem too upset by it, and the suspension is taut but forgiving. It’s a nice balance.

Hyundai’s steering systems are usually pretty dull in their mainstream models, and it’s a similar story here. But considering this vehicle is not primarily designed as a pure driver’s machine, you tend to give it slack. The main thing you need to know is this is a very pleasant and enjoyable drive overall, whether it’s out in the country or threading through inner-city streets. It feels natural and at home in all scenarios, even if you want to give it a bit of a push on a spirited twisty road. The handling and balance is one of the biggest surprises for us. 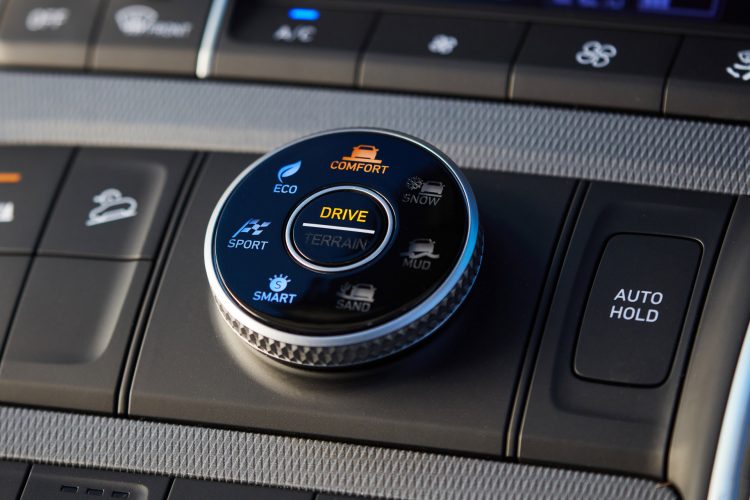 So, should you buy a Palisade? And why choose it over the Santa Fe? If you need (or want) a very large SUV, for whatever reason, the Palisade has a very high potential of meeting your needs. You have up to eight seats on offer, which is very rare in this segment, as well as up to five child seat anchor points, along with enough amenities and mod-cons to keep all the family happy. And lastly, the poor old driver doesn’t miss out either; this is a surprisingly enjoyable vehicle to drive.

If you can stretch to the Highlander we recommend you do that, as you get the full ‘super-size’ luxury SUV experience. We’d also recommend the diesel. The big torque output and all-wheel drive – as well as significantly more attractive fuel consumption – almost makes the V6 seem pointless in our opinion.