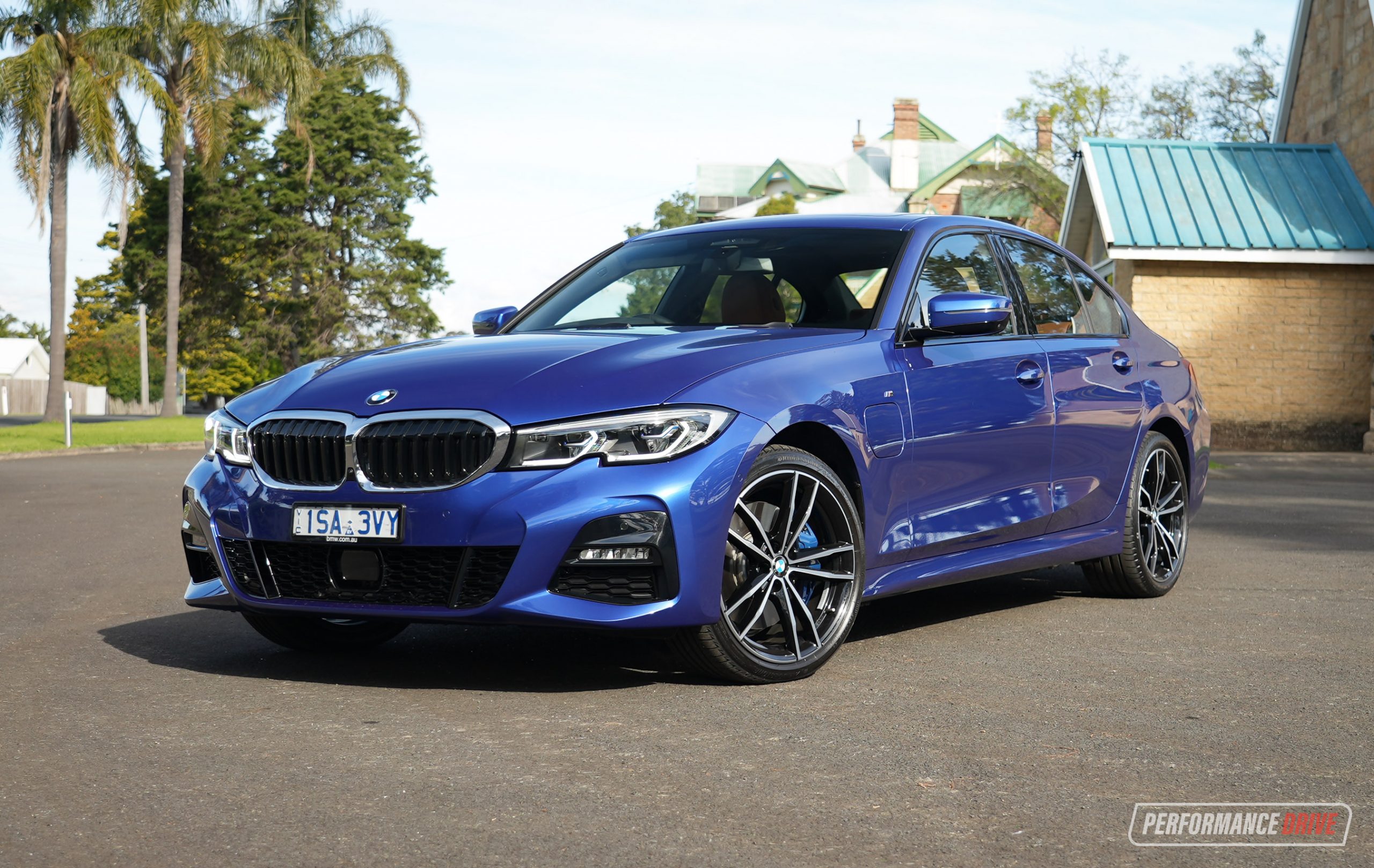 We have reached the turning point where hybrid technology and fuel efficiency has become mainstream. When you look at the new 2021 BMW 330e, it is a sophisticated, fast, great-handling mid-sized sedan. And it just so happens to be super economical as well. 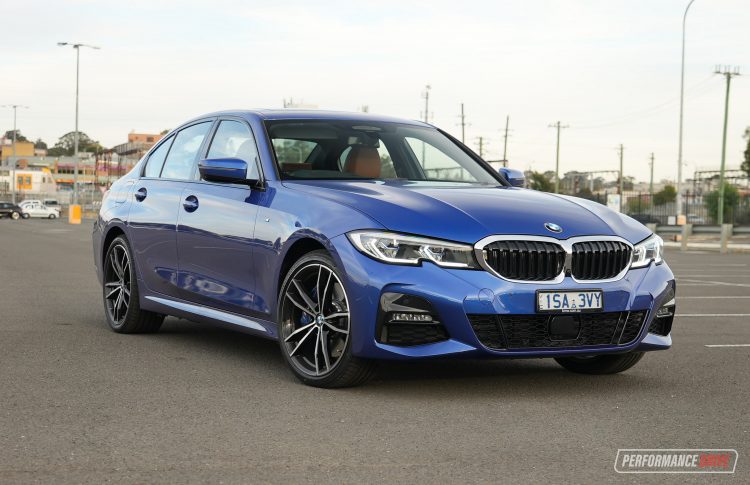 It’s a shame that the 330e is among the unpopular in the mid-sized luxury sedan market, because it has lots going for it. It would appeal to buyers that are considering cars like the Tesla Model 3, the Genesis G70, Mercedes Benz C300 e, and the Volvo S60 T8 Hybrid.

In Australia it sits above the 320i and 330i, and below the M340i xDrive within the G20 3 Series range. Power comes from the same 2.0-litre turbo-petrol four-cylinder engine as featured in those entry models, but here it is supplemented by a 12kWh battery and 83kW/265Nm electric motor. A sports eight-speed auto and rear-wheel drive ensure the sheer driving pleasure the nameplate is renowned for remains. 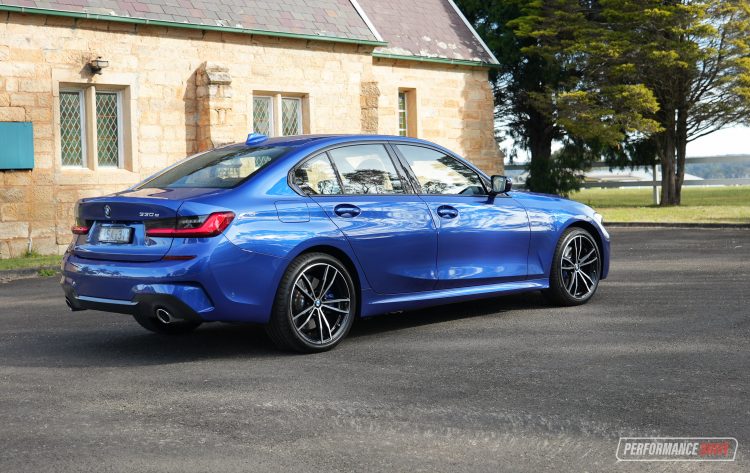 There is no mistaking the design of a BMW from afar. The 330e follows that distinct language with a dual front grille, with active shutters, and beautifully sculptured dual-lens headlights with adaptive LED technology. There is a perfect balance of chrome and glossy black elements that promote elegance and attention to detail.

Acute angles and sharp contours flow to the rear, which give off the notion of aerodynamics and performance. At the rear, handsomely crafted LED taillights steal the show, which are protruded by a chiselled boot line. We love its overall shape as a well-proportioned, sharp, and sporty sedan – which is rare to see nowadays. 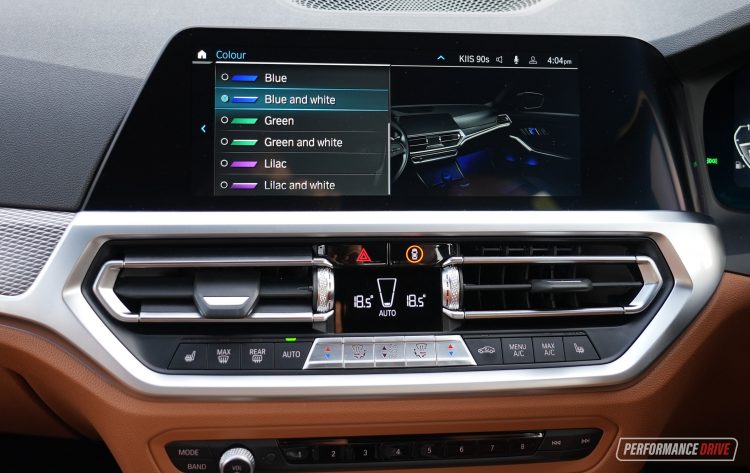 In previous generations, BMW was slow to the race in modern interior design. It was one of the last luxury brands to adopt digital instrument clusters and larger multimedia screens. Not anymore. The 330e’s interior is full of sophistication and technology.

You get customisable ambient interior lighting, a fancy 12.3-inch digital instrument cluster, head-up display, a 10.25-inch central screen that is operated by BMW’s iDrive system, using a control dial down on the console, sat-nav, digital radio, extended Bluetooth connectivity, and an onboard 32GB hard drive. 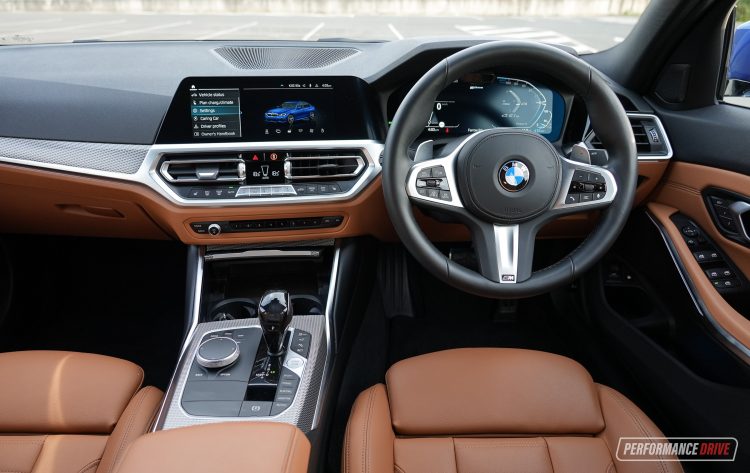 But the interior is not just technically advanced. It’s clean, well laid-out, and surprisingly as practical as some SUVs. There are decently sized cup holders and big door pockets, a wireless smartphone charger, storage holes and plenty of wriggle room for four adults in the front and rear. In fact, the rear has the largest legroom a 3 Series has ever had. You even get tri-zone climate control, USB-C chargers in the back, and tremendously comfortable seats back there.

Further back, the boot in the mid-size sedan is not huge in the 330e. It may not be so important to buyers in this car category, but the lithium batteries for the hybrid system, mounted under the back, cause the boot floor to rise up. You can still easily fit a week’s worth of groceries in, but it doesn’t have the vertical depth for bulkier objects. Officially, it measures 375 litres. That’s down from 480L in the regular 3 Series. But it is 45 litres bigger than the Genesis G70 and 75 litres bigger than the Mercedes-Benz C300 e. 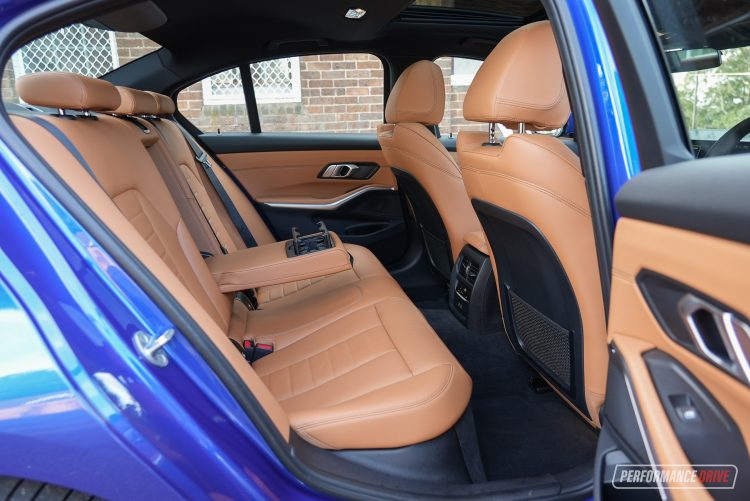 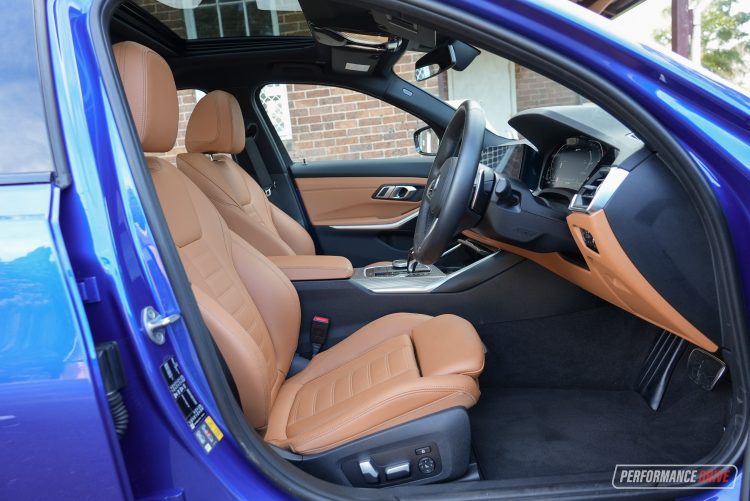 You do have to pay extra for things like acoustic window glazing to reduce cabin noise, an electric and auto boot, gesture control (like a trackpad but in the air), Laserlight headlights, driver’s lumbar support, heated seats, and tyre pressure monitoring. We think some of these features should be standard when you consider the 330e’s price. 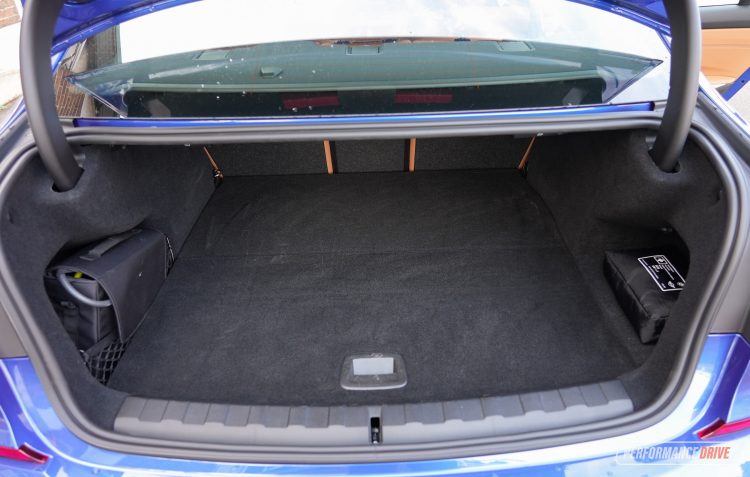 The 330e brilliantly demonstrates that hybrid technology is not about one or the other anymore. Neither performance nor economy needs to be compromised. Focussing on the figures, the 2.0L four-pot turbo-petrol engine outputs 135kW and 300Nm. It is complimented by a synchronous electric motor that yields 83kW from a 12kWh lithium-ion battery. Combined, the power output is 215kW and there’s a handy 420Nm of torque.

All these figures translate to an impressive claimed 0-100km/h time of 5.9 seconds. Our testing measured it in just 5.39 seconds, using a Racelogic Vbox Sport and a private road. On the road, its performance is exhilarating. The combo turns the 330e into a real head jerker with that instant surge from the electric side, and top end roar with the petrol motor. And with the power going exclusively to the rear wheels, it can easily spin the tyres off the mark. As always from BMWs, it sounds willing and fit, too.

The onboard generator recuperates energy into the battery while driving (during braking and decelerating), or you can plug it in to recharge. It is claimed to take 2.6 hours to charge to 80 per cent capacity using a 230V/16A power outlet, at 3.7kW. Or to 100 per cent in 3.6 hours. And for that you get an electric driving range of around 50km. 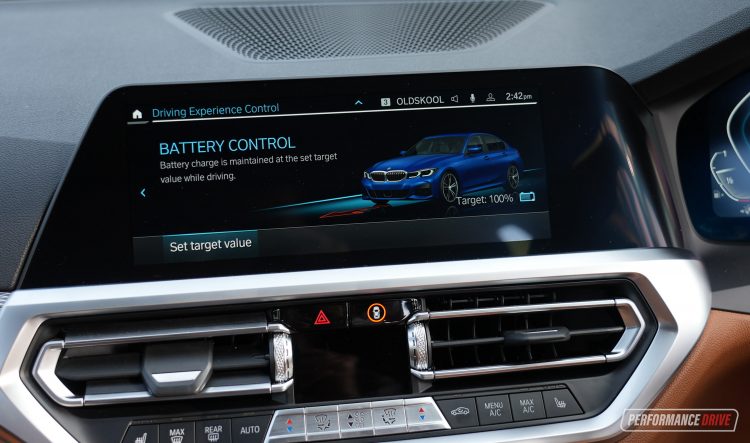 There are some nifty on-board options to charge the battery to a customisable percentage while driving, or opt for one power source or another. For example, you might wish to use the petrol side when on the freeway when it is the most fuel efficient for that type of journey. Then you might use the electric side when zipping around town when petrol consumption would be at the highest.

In terms of fuel economy, it is immensely impacted by the length of your trips and whether you bother to plug it into a power point to charge. Basically, you could use it like a fully electric car if you charge it regularly, do not use more than 40 per cent throttle, and your commute is less than about 50km. 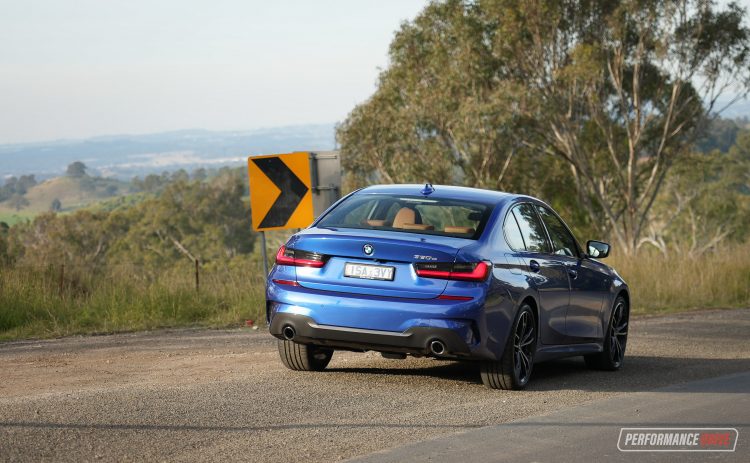 In the name of fuel efficiency, there is one annoyance that takes a little getting used to. Because battery charging happens when braking, it causes braking power to be inconsistent and it can result in a jerky stop. The braking pressure from your foot needs to constantly change, so it is difficult to give that smooth BMW journey to your passengers.

In regards to driving dynamics, the 330e is low to the ground. Which means body roll around corners feels almost non-existent. Add to that, the M Sport has sports suspension that gives it class-leading handling. Tight and targeted steering makes it feel superbly focussed and secure on the road – especially in tighter corners. And it’s all customisable in the Individual car settings menu. Going over bumps doesn’t seem to disturb the M Sport’s tracking either. It absorbs bumps wonderfully, although on the sporty-firm side of things. But it’s not a harsh or sudden thump. 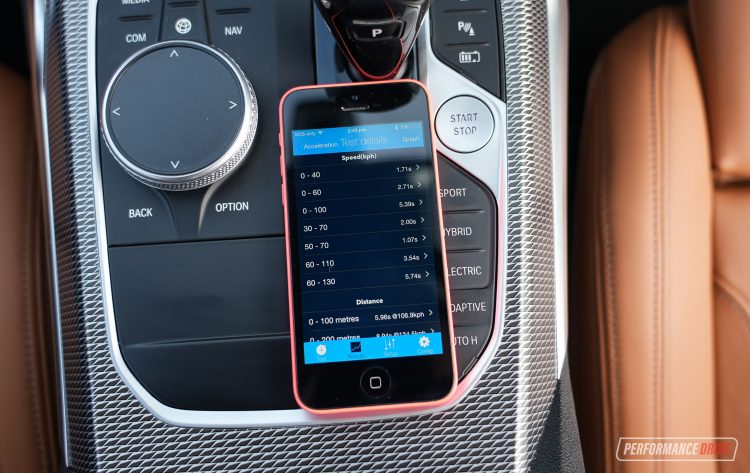 You can feel the extra weight over a 320i or 330i. The 330e weighs 1747kg (tare) and the 330i weighs just 1433kg. However, even at 1750kg or so, most of that added weight is low down, so the centre of gravity remains at a desirable level. Also, compared with its key rival, the Mercedes C300 e, which weighs 1917kg (tare), the 330e has the edge in this department. In saying that, you can sometimes notice the extra fat under really hard braking, and during sudden directional changes on higher-speed bends. Compared with the regular 330i.

What we love most about the driving experience is that the hybrid system does not detract from the fun, engagement or performance. Just the opposite, in fact. You can still enjoy a spirited journey and listen to the barky turbo engine, and engage with the superb eight-speed auto. And, it’s even faster, with better low-end response than equivalent petrol-only siblings. 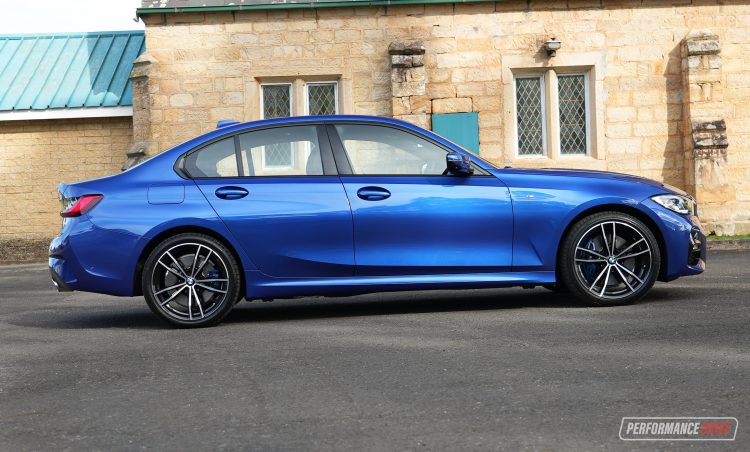 There is a noticeable quality feel about the 330e M Sport. It goes right down to a strong and positive thud when you close the doors. You feel like you’re driving a well-thought out, solid and sophisticated sedan. And all features and tech feel more natural and intuitive than some others on the market – such as the adaptive cruise and the lane keeping aid.

You can’t go past that eye-catching and sophisticated German exterior that now flows into the interior. And it doesn’t impede on practicality. The interior has an impressive amount of room and storage options for its category.

But the best thing about the 330e in our opinion is that it is an extremely liveable hybrid that doesn’t make you compromise on performance or driving enjoyment. Now you can go for a guilt-free exhilarating drive while being good to the environment and sipping fuel.

PROS:
– Exceptional fuel economy
– Unbelievable performance for what it is; this car makes hybrid fun
– Versatility in charging/battery preservation; plug-in, set the engine to charge, or petrol only
– Perfectly set out interior; practical yet elegant
– Traditionally engaging BMW/RWD handling

CONS:
– Jerky brakes from variable regeneration at different times
– Some options should be standard
– Boot size drops from 480L to 375L (although bigger than nearest rival)