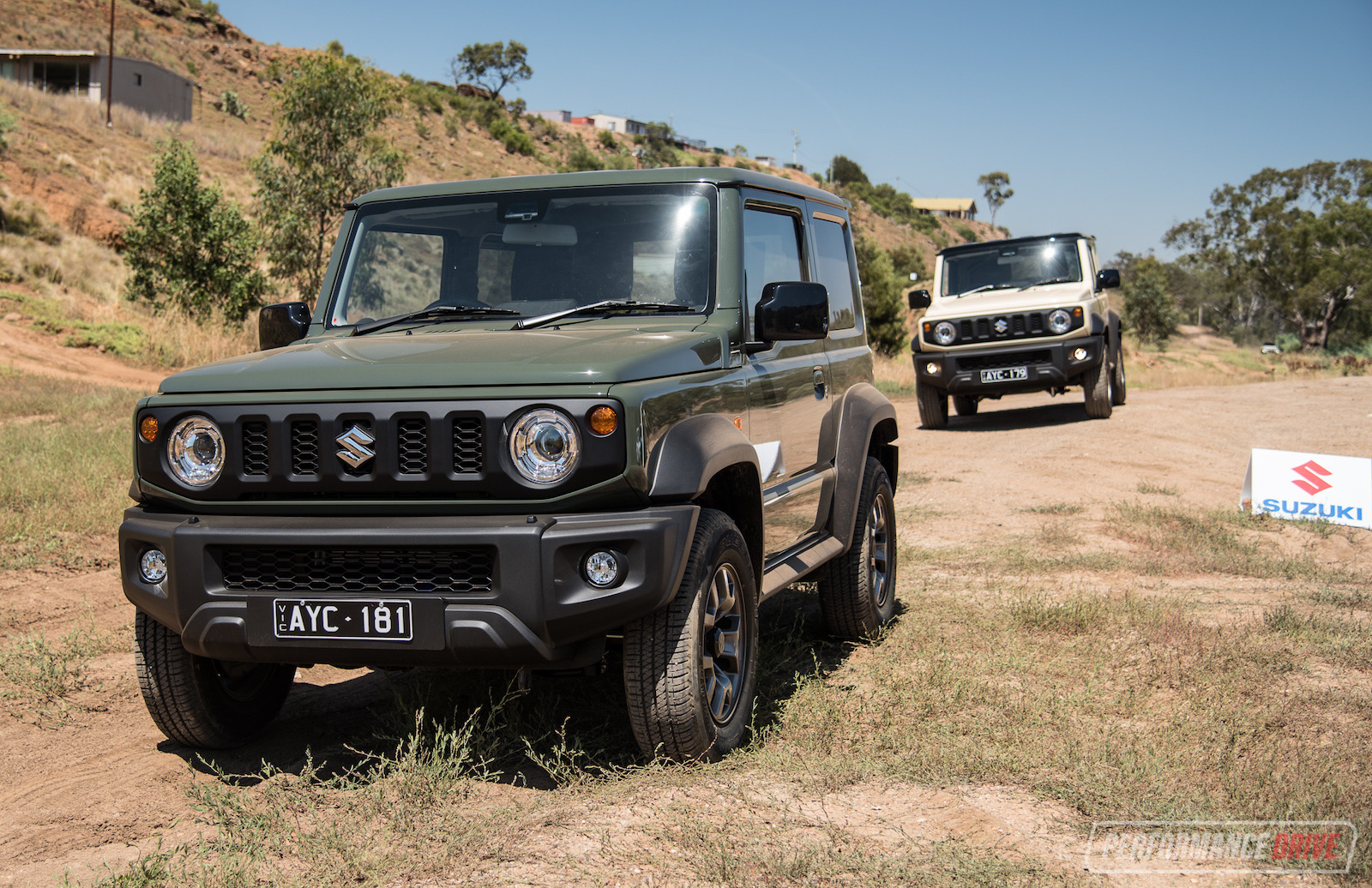 Forget new Ferraris and Aston Martins on the horizon, the 2019 Suzuki Jimny is turning out to be one of the most highly-anticipated launches of this year. Suzuki Australia put on a great event to showcase the new model to media earlier this week, giving us a chance to sample the micro machine in its natural habitat. 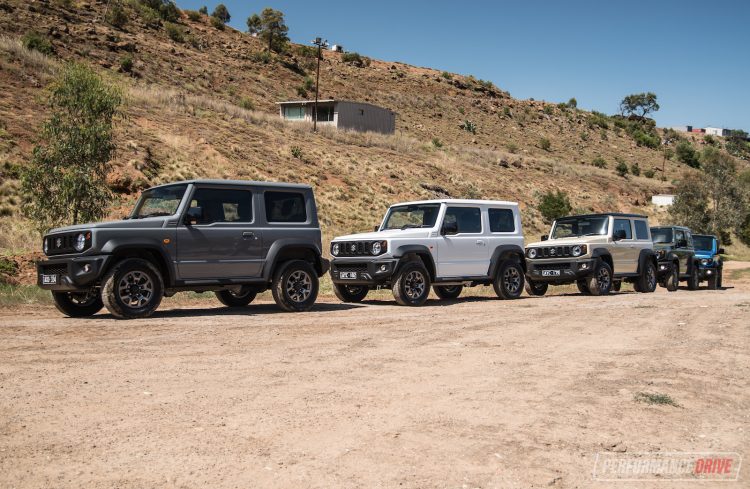 That natural habitat was the Melbourne 4×4 Training and Proving Ground in Werribee. Usually, media launches offer journalists a chance to sample vehicles on the road for about a day. But not this time. It was all exclusively off the road. And this gives you some idea about the Jimny’s intended purpose.

In the compact SUV market space, the Jimny has long been the go-to vehicle for those wanting real off-road performance and simplicity. In fact, you can trace its roots all the way back to 1970, with the first-gen Jimny ‘LJ10’. Suzuki has been building these little tykes for decades, so it comes as no surprise it has the most experience in this arena. 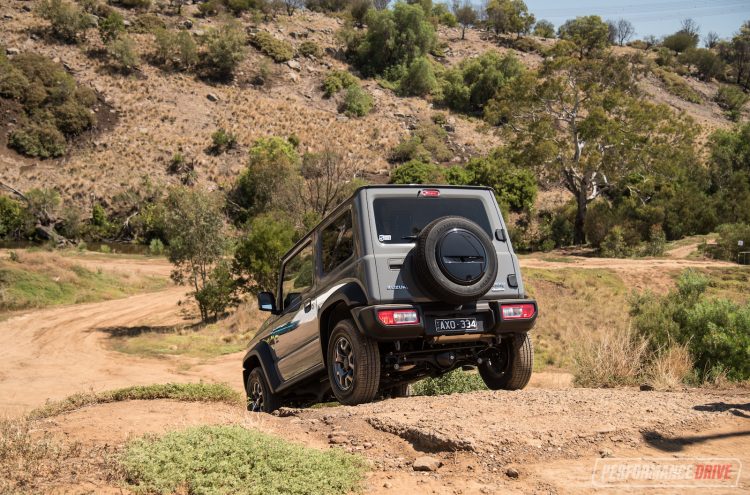 For the new model Suzuki has turned up the volume on refinement, technology, and style. While the previous model featured a somewhat softer look, this new beast is definitely going for a more hardcore, more rugged theme. Check out the flat panels and hard edges, and those muscular wheel arch extensions.

Inside it is significantly more refined and slightly upmarket, in comparison to the previous model. Sure, most of the dash layout is fairly square and lacks any aesthetic flourishes, but since it’s not trying to be anything but a rugged and user-friendly SUV, it all works really well and matches the exterior’s character. 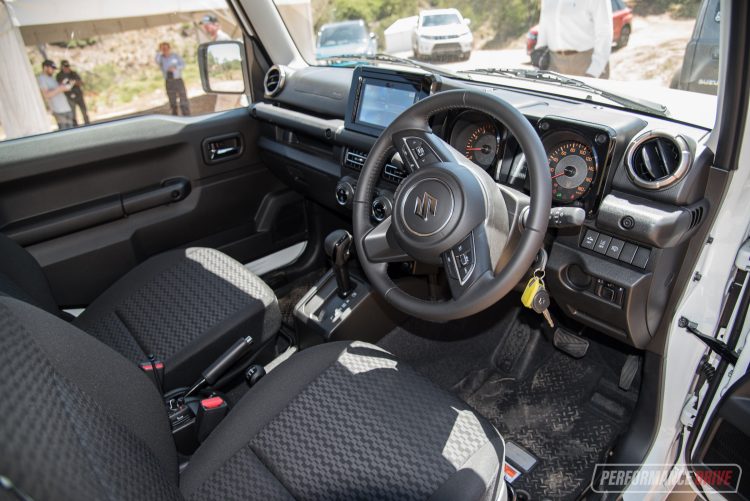 There’s only one variant on sale in Australia, and it’s available with either a five-speed manual or a four-speed auto. Prices start at $23,990 for the manual and from $25,990 for the auto. But in either case the interior is packed to the brim with standard goodies. Up on the dash is Suzuki’s universal 7.0-inch touch-screen media interface. It comes with a rear-view camera, sat-nav, and Apple CarPlay and Android Auto. Yep, all as standard. It’s awesome. Digital climate control, cruise control, and power windows are also part of the default kit.

We love the way it’s all presented. At the bottom of the dash fascia are some of the driving modes, and then the climate in the middle, with the media screen at the top. If you have trouble finding something in here then you really need to get yourself checked out; it doesn’t come much more intuitive than this. Actually, we’re not a huge fan of the power window switches, which are placed within that lower panel on the dash. Other than that, everything is in arms’ reach and where you’d expect it to be.

Sadly, while Suzuki has fit plenty of driver assist technologies to optimise safety, such as autonomous emergency braking and lane departure alert, ANCAP has found the whole package is only deserving of a three-star safety rating. The most damaging element to its score was to do with ‘safety assist’ functionality. ANCAP gave this area a score of just 50 per cent. It was found that autonomous emergency braking wasn’t detecting cyclists very well, and responded poorly during the nighttime. 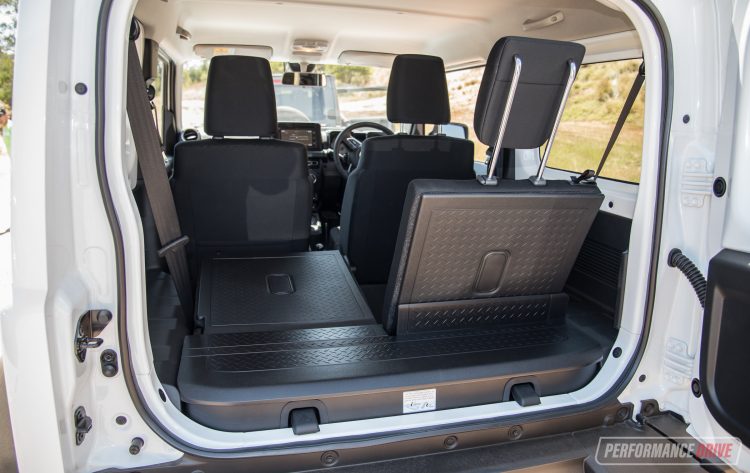 The Jimny is a strict four-seat vehicle. But that doesn’t mean it only just fits four. In the back are two surprisingly spacious chairs. We jumped in the back and found them to be pretty pleasant. There’s enough room for your shoulders and legroom isn’t too bad. The floor doesn’t drop down much from the seat which is probably this biggest hindrance, as it means your knees point to the sky, especially if you’re tall.

To the sides are the wheel arches, which leave a big flat surface. We think it would be nice if Suzuki designers shaped in some cup holders here or at least a trough for your phone, as it’s just a slick plastic surface that’s not really usable. However, when the rear seats are folded down flat, this flat surface matches up so you have the full use of the overall width for storage. And the seat-backs (we presume the side surfaces as well) are coated in resin for durability.

Out in the 4×4 park the Jimny is simply amazing. You have 210mm of ground clearance to utilise, but since the wheelbase is just 2250mm (same as previous model), this clearance is essentially magnified. The ramp-over angle of 28 degrees, and the outstanding approach angle of 37 degrees and departure angle of 49 degrees, means it’ll clamber over almost anything before you touch bottom. 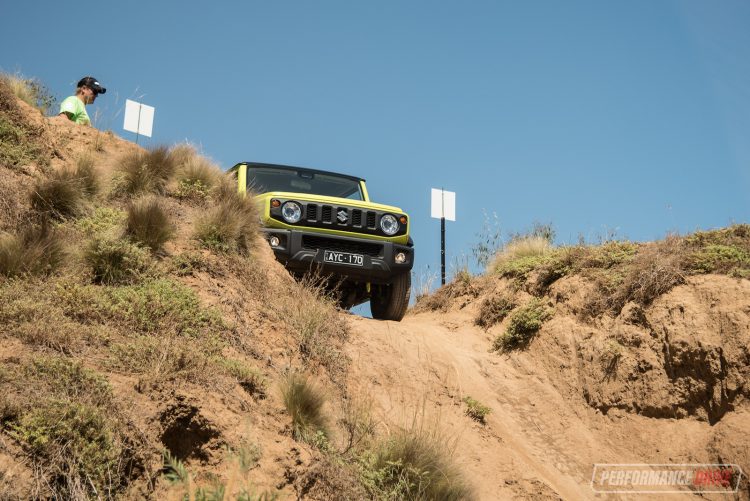 Some of the steep sections of the 4×4 park had us all scratching our heads as we really questioned if the Jimny was able to get through. But it did. Not once did it scrub out. We’ve put together a little video for you showing one of the loops of the circuit so you can see for yourself. Unfortunately, the camera alters the perception of severity. Some of the sections were actually much steeper than they look on camera.

Both models come with part-time rear-wheel drive/four-wheel drive, with a low range transfer gearbox. For the first time, there’s also a brake-type centre differential, which acts like a limited-slip diff. In our experience these brake-type diffs don’t usually work. Not in this case, though. You could feel the system providing useful assistance. If a front wheel begins to spin, some braking is applied momentarily to the given wheel, allowing the drivetrain to send power to the other wheels. As far as we could see, the system worked completely trouble-free. Nobody got stuck.

You see, the Jimny only weighs 1075kg (1090kg for the auto). This is nothing by today’s standards. So, as you can imagine, it doesn’t require much grunt to get this little thing zipping along. Out in the bush the Jimny feels extremely agile and light on its toes. And part of this is thanks to the instant response of the engine. If the engine were turbocharged, we reckon any turbo-lag would ruin this determined and energetic personality. During our time behind the wheel it never felt like it needed more grunt. Even during very steep climbs the engine has plenty of puff left in it. 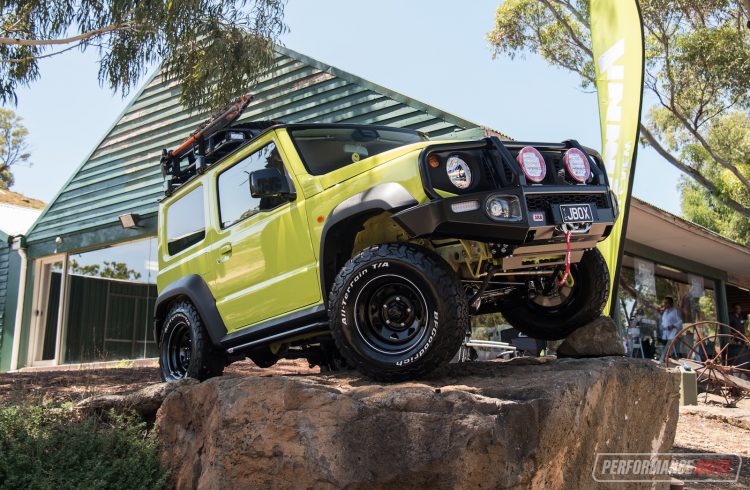 We think Suzuki is onto another winner here. We absolutely adore the new Swift Sport, and now this. Suzuki’s showroom looks better than ever.

If you’re in the market for a compact SUV, and maybe you’re trying to find that something special. Something with a bit of pizzaz and character. Get yourself over to a Suzuki dealer and check out one of these. It will surprise you and even reinvigorate your day with its fun-loving personality. The fact that it also represents great value for money with its long list of standard equipment, and comes with a five-year warranty, only adds to the appeal.

Aftermarket enthusiasts will be happy to hear there are loads of options around to modify the new model. Suzuki Australia demonstrated the possibilities at this launch event by showing off a fully kitted-out version with ARB accessories. See above.

We are planning to do a more in-depth review in the near future to see what it’s like to drive on the road, and we’ll do our ever-popular 0-100km/h video for you. In the meantime you can check out our off-road demo video below for more of a taste.

SSC, the manufacturer of some of the fastest cars on the planet, have caved to pressure and conceded the fact...

Just when you thought the humble sedan was a relic of the past, Hyundai releases the new i30 sedan (previously...

Some potential specs and information regarding the upcoming 2023 BMW M4 CSL and M3 CS have surfaced online, with power...