Finally, Toyota has confirmed it is working on a proper hot hatch and has just released a teaser sketch to get everyone excited. The hot hatch is going to be based on the Yaris. 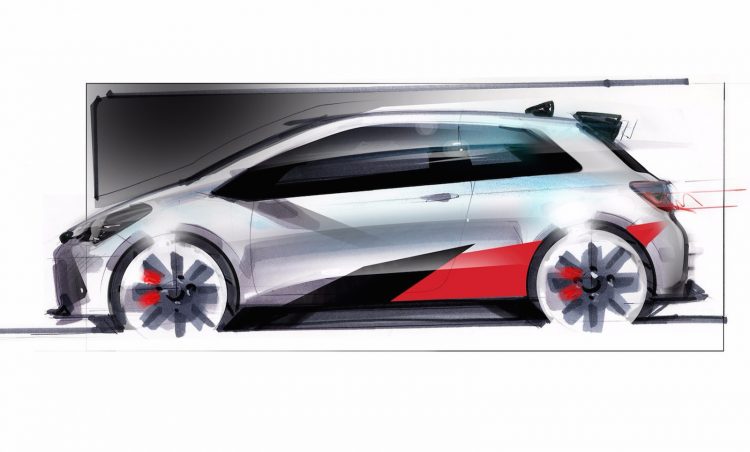 Toyota is returning to WRC next year, and it is using this experience to build the new sports hatch for the road. As we know, the WRC car will also be based on the Yaris, and it is believed Toyota will use its Gazoo Racing partners for development of the two. In a statement, Toyota said:

“Not only will the WRC scene provide learnings to further improve Toyota’s road car technology, it will also inspire an expansion of the Yaris lineup with a performance oriented version.”

It’s been long rumoured that Toyota would dive into the performance car market with the help of Gazoo Racing, and it’s understood the motorsport division will be responsible for coming up with the engine for the road car.

No specific details have been confirmed by Toyota at this stage. Speculations suggest the Yaris hot hatch will be powered by a 1.6-litre turbo four-cylinder. Power is expected to peak at around the 150kW mark, hooked up to a front-wheel drive system.

This would give the hot Yaris desirable credentials, especially when compared with its main rivals including the 147kW Ford Fiesta ST (overboost) and the Peugeot 208 GTi (153kW).

Judging by this teaser image alone, it looks like the car will be a three-door, featuring a range of sporty highlights such as big wheels, a bodykit, and a neat rear spoiler.

A full debut date hasn’t been mentioned but the Geneva motor show in March is probably a good bet. Toyota may also decide to unveil at the car at the opening round of the 2017 WRC; the Monte Carlo Rally from January 19-22.