After sampling the well-equipped Sport version and Hybrid earlier this year, we thought we should test out the 2012 Honda Civic VTi-L base model. Is the VTi-L good enough to fend off the competition? Or does it need the sportiness and gadgets of the Sport and Hybrid to keep it special? 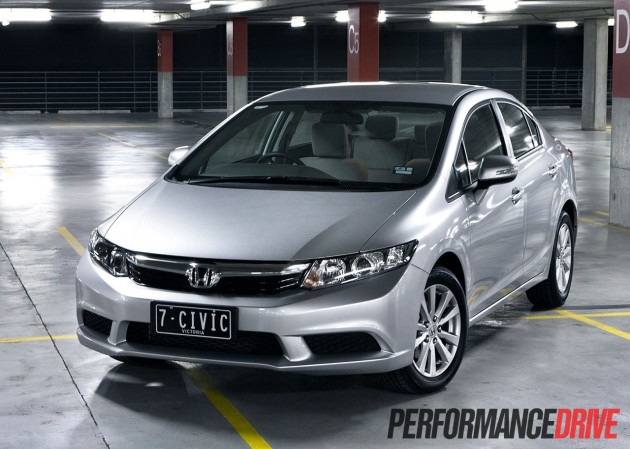 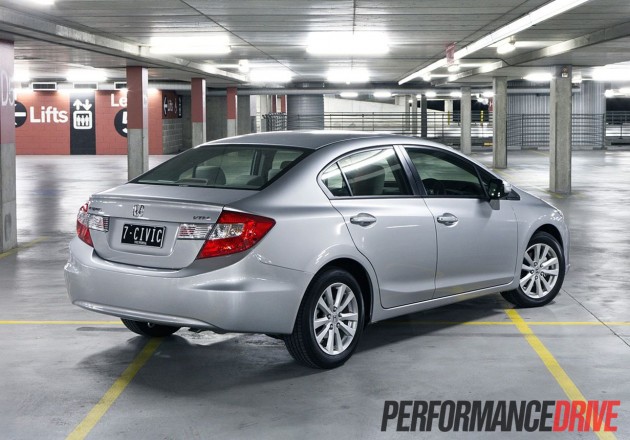 The new ninth-gen Civic is in town, and the VTi-L is Honda’s answer to the Toyota Corolla/Mazda 3’s penny pinching range. With the option of the manual from $20,990, and the five-speed auto from $23,290 (as tested), the price tag means it is ready to fight it with the current market leaders. 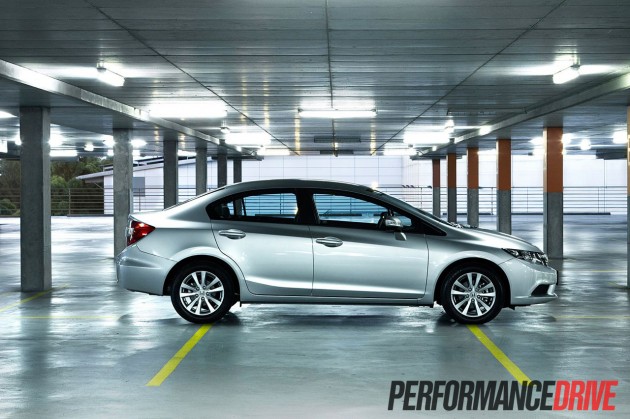 The 2012 Honda Civic VTi-L comes with a 1.8-litre SOHC four-cylinder engine equipped with Honda’s trademark i-VTEC. It’s got 104kW on tap with 174Nm of torque. That’s exactly 1kW up from the previous model. While not exactly inspiring, in our automatic five-speed you can slot the gear lever into Sport mode for some twisties action or hit the ECON button when you want to skimp on fuel.

For a bottom range unit the Civic VTi-L is surprisingly well equipped. It has the fantastic Intelligent – Multi Information Display (i-MID) that places trip, media, warnings and options information in a large screen on the dash, next to the digital speedometer. A Bluetooth handsfree kit, auxiliary input and USB connection is standard, as is the automatic climate control.

Cruise control is also standard, a pleasant surprise. We also like the fact that it’s got an automatic climate control across the range, something that’s only on offer in higher spec’d rivals. 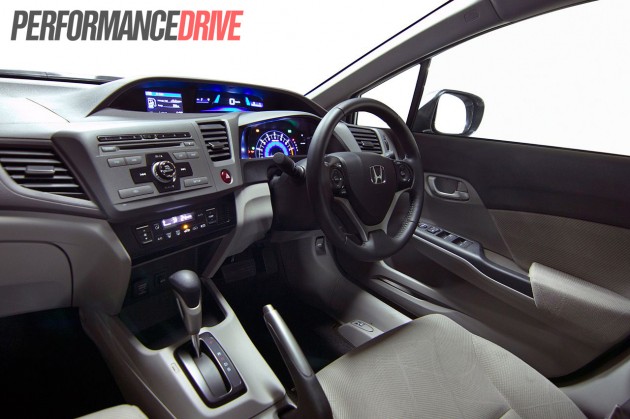 Open the driver’s door and you will marvel at the expanse of the interior. The thin A-pillars with the small corner windows make the inside feel roomier, and the split level dash design doesn’t intrude into the windscreen at all, allowing more of the road to be seen.

Drop in and while the seats feel supportive, the fabrics look a little low rent compared to the previous version. Coloured in a shade of boring beige doesn’t help the cause either. Otherwise, they are comfortable, supportive and can be adjusted to find the right seating position rather quickly. Just remember to adjust the steering wheel’s height or you might find it blocking the speedometer.

The futuristic split level dashboard has been retained, and you’ll soon realise all other instrument clusters look old fashion and quaint next to the Civic’s brilliant lay out. We found it very easy to read and pleasing on the eyes. 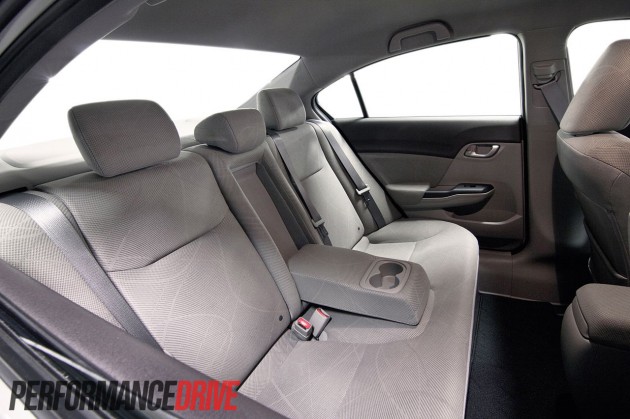 All the controls are easy to reach, and with the buttons on the steering wheel switching between tunes, phone calls and mileage display is second nature. All the bare essentials are there; audio controls, information screen selection button, cruise settings and Bluetooth answer/disconnect buttons, placed in a layout that you can get used to in seconds.

Our automatic VTi-L gets snazzy silver flappy paddle shifters behind the wheel for the F1-style gear change experience, and the feel is positive and solid. 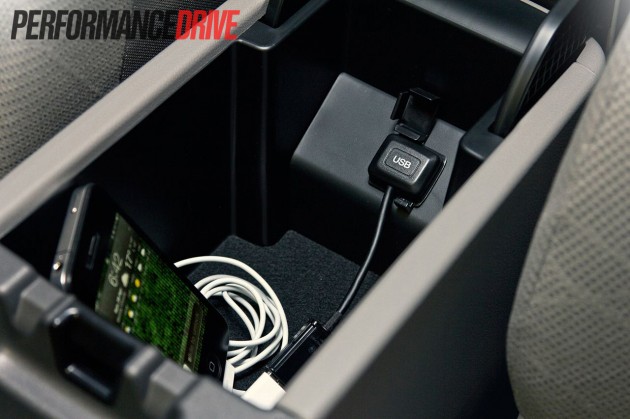 While you might find a slight shortage of cubby holes to store stuff in, the Civic does have heaps of wide-open space. The USB input socket is located in the adjustable armrest, which is also great for storing your iPod or flash drive from prying eyes.

The placement of the 12V charging hole is a little bit impractical for the GPS charging cable, as the Civic’s window is steeply raked and the 12V is deeply recessed below the climate controls. It’s great for phone chargers though; directly below is a big cubby hole for keys, phones, and so on.

The boot is cavernous, offering 440 litres of space; slightly more than what is offered in the Mazda3 sedan (430L), and slightly less than the Toyota Corolla Ascent sedan (450L). It’ll take three golf bags with ease, and the rear seats can be folded down for more space. On the whole, it’s a very practical car to live with on a day to day basis. 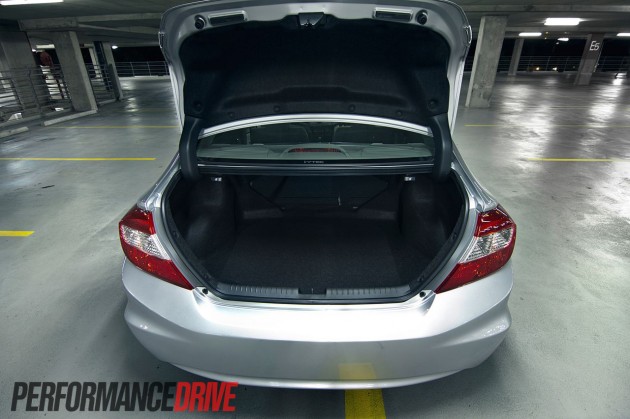 The Civic has always had a unique presence on the roads, and every new version has seemed to look like an extra in a futuristic movie. However, the latest generation is more of a rehash compared with the previous generation’s spaceship looks.

The new Civic follows the company’s latest design language, with a sharp grill and angled headlights, already seen on the Honda City and Odyssey, so you may find it a bit too familiar. The rear end actually looks similar to the new Camry; a bad sign when the increasingly popular Korean carmakers are unveiling more and more sharp-dressed, and rather attractive models. 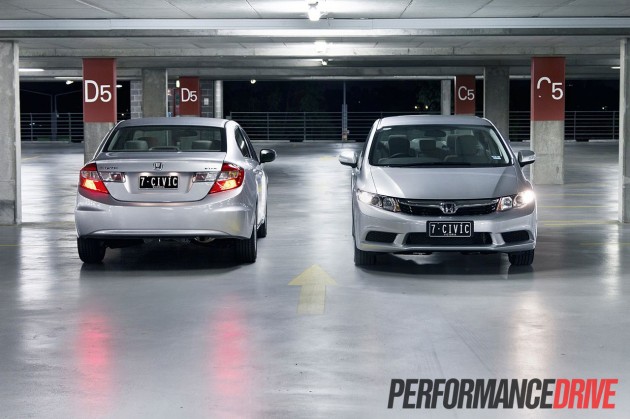 The Civic has loads of airbags and safety features, and has been awarded five-stars by ANCAP. In recent tests it earned 34.91 points out of the maximum of 37.

The advanced chassis design is at the heart of it all, allowing impacts to be safely absorbed and diverted away from the cabin. ANCAP has also rated it 16 out of 16 for the side impact crash test, thanks to the standard curtain and side airbags. These airbags deactivate if you have a kid or a baby chair in the front, avoiding injuries that could be caused by airbag deployment.

After testing the polished Civic Sport, the VTi-L has that same sporty spark. The identical and lovely small steering wheel is still a delight to hold and use, while the leather stitching feels like it’s handmade with care, and gives great feedback for an electric power assist system. The Motion Adaptive Electric Power Steering from Honda makes the steering light and easy to turn when trundling around the car park, but firms up reassuringly at road speeds.

Honda has also introduced a super economy mode in the Civic range, in keeping with its going-green philosophy. On the right side of the dash, next to the steering wheel, is a little green button marked ECON. While usually in cars an ‘Econ’ button does little more than light up a symbol on your dash cluster, here it means that the Civic VTi-L gets serious about sipping fuel. 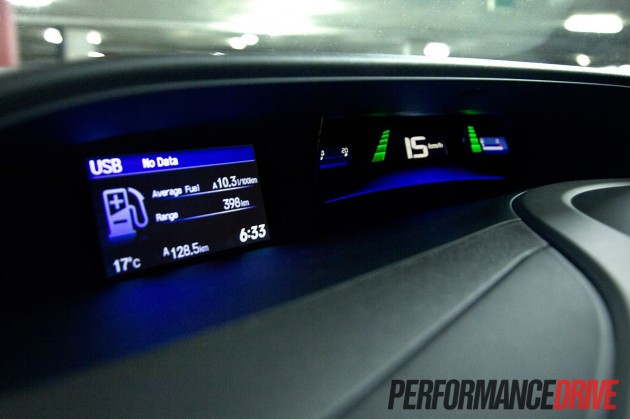 It changes the fuel mapping into super economy mode, drops the throttle’s sensitivity and slows the gear changes. The gas pedal suddenly feels mushy and you can feel the gearbox slurring its changes as it moves to the most economical upshift. And that’s when you start driving like you are on ECON mode.

The lack of power and the ensuing serenity just makes you change your driving style to suit; daily driving is suddenly all about conserving momentum as you try to use the throttle as little as possible while getting on the brakes less. All this is captured by the ‘economy’ bars framing the digital speedometer; it turns from blue to green with shades in between to tell you how economical your right foot has been.

In terms of actual fuel saving out on the road, we saw the economy dip below 7L/100km. It may not seem so, but it can be a moderately fun challenge to see how low you can get the economy to go. 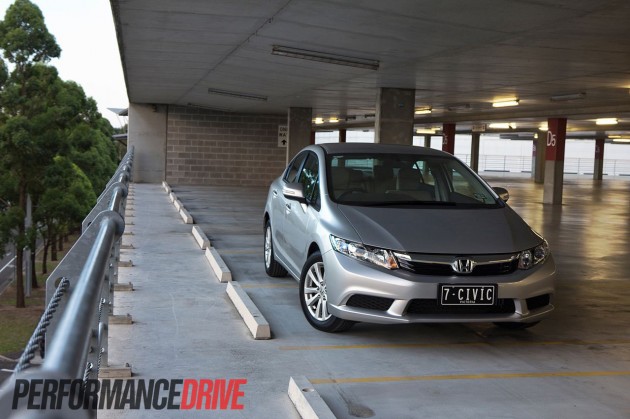 On the flip side, when you want the Civic VTi-L to boogie, it ties its hair up and takes on the challenge. Push the gear lever to D and then to the left for Sport mode, and immediately the engine comes alive, reacting instantaneously to every throttle input in true naturally aspirated Honda form.

The auto swap cogs much faster, and that’s where the sweet paddle shifters come into play. Rowing up and down the gears is half the fun, with the auto determined to snap into the next gear as quickly as possible.

In Sport mode, it even refuses to upshift when the rev needle is banging on the limiter. Honda has not made it some sort of gimmick then, with the Sport mode delivering what it says on the tin.

The Civic VTi-L attacks corners with gusto, and stays true to the line you’ve committed to. However, the Duranza tyres reach their limits rather quickly and noisily, announcing their relapse into understeer with loud squeals. As a result, it’s not the best car to fire out of corners. With the larger tyre and alloy wheel package, as seen in the Sport, handling is more encouraging.

In terms of engine performance, the SOHC R18 is designed for fuel economy rather than high revving naturally aspirated liveliness. While it zips through the rev range, don’t expect a thump in the back when you downshift. 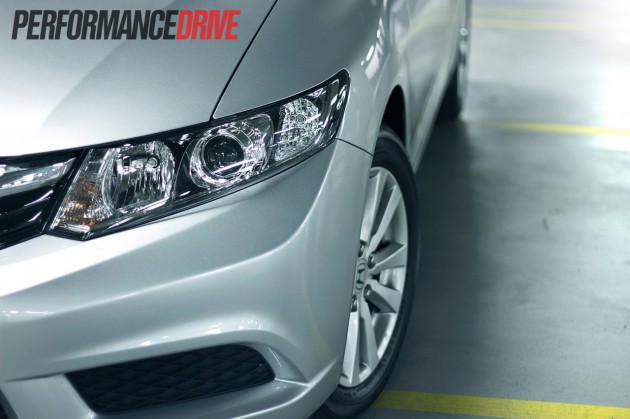 The new Honda Civic VTi-L is a strong contender in a field of popular rivals, and still remains one of the best buys for your dollars these days. The Koreans may pack more equipment, but the Civic VTi-L has all the essentials and drops in a dollop of Honda quality too. The switchgear all feels durable and cohesive, while the ECON and Sport modes are flourishes of Honda’s engineering ingenuity.

If you are looking for a convenient daily that’s easy on the eyes, good on fuel, and takes to the twisties when there’s a chance, it’s hard to go pass the Civic. We loved the roominess, the in-car entertainment system, and the dual personalities the ECON and Sport modes offer.

While the competitors have a multitude of optional equipment, the Civic VTi-L is worth a look with its long list of standard equipment. And…well, it’s a Honda, a brand that has been a by-name for quality for years. 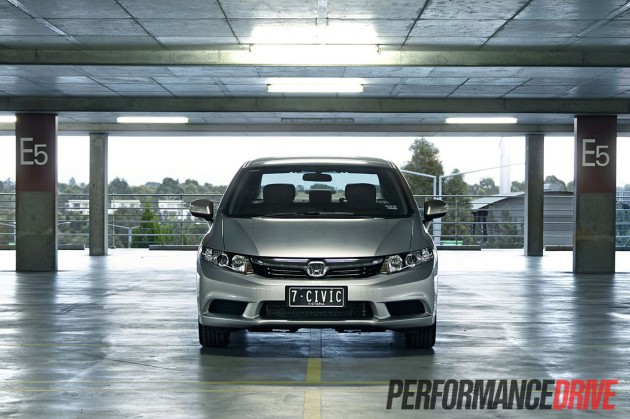 Toyota Corolla Ascent – 1.8-litre naturally-aspirated inline four cylinder, 100kW/175Nm – 1270kg – $22,990 (four-speed auto)
It’s in a constant fight with the Mazda3 as the leader in this segment. It’s got a 1.8L engine, an interior you can live in, has humdrum dynamics and…well, it’s a Corolla and it’s cheap. It’s the king of reliability, but the styling and four-speed auto is well past its sell-by date.

Mitsubishi Lancer ES – 2.0-litre naturally-aspirated inline four cylinder, 113kW/198Nm – 1335kg – $23,990 (CVT)
The most powerful engine in this class. Good handling, and plenty of kit. It’s also available in a range of models, including the super-fast Evolution.

Hyundai Elantra – 1.8-litre naturally-aspirated inline four cylinder, 110kW/178Nm – 1289kg – $22,590 (six-speed auto)
The Elantra comes loaded with standard kit, and it is arguably the most stylish affordable small sedan on the market today. The interior blue lighting is becoming a Hyundai trademark, but quality is still a worry for most buyers.

Jerry Yam is a contributing writer and road test journalist at PerformanceDrive. He is not only a genuine motoring enthusiast, he's also a keen driver and enjoys the modified car scene. His stories have appeared in titles such as Hot4's and Street Commodores magazines.