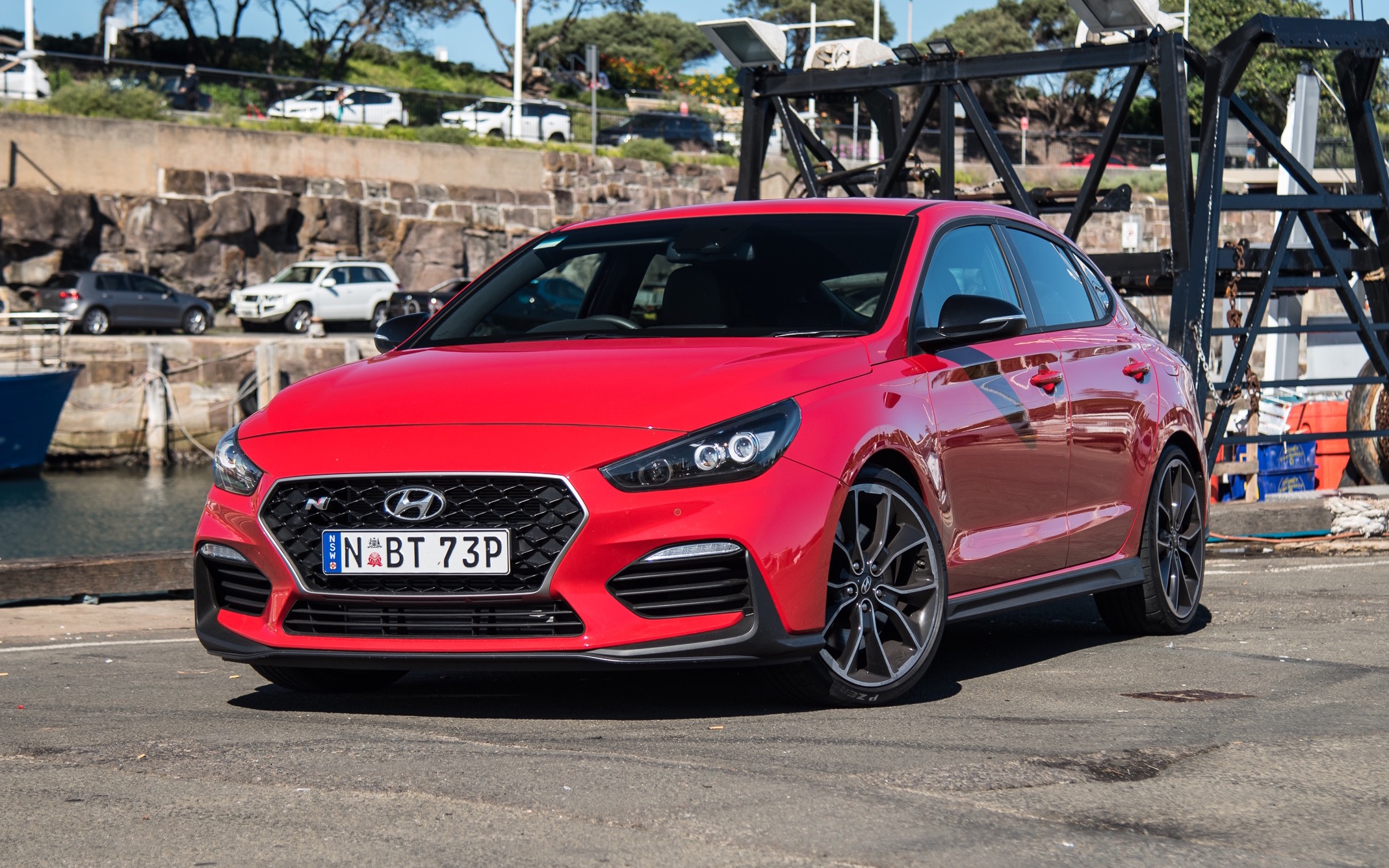 Tired of the common hot hatch and desire something a little bit different? Maybe something with a bit more class? Allow us to introduce you to the Hyundai i30 Fastback N. It’s just like a hot hatch in a dinner suit, crackling into the market as a unique take on the popular formula. 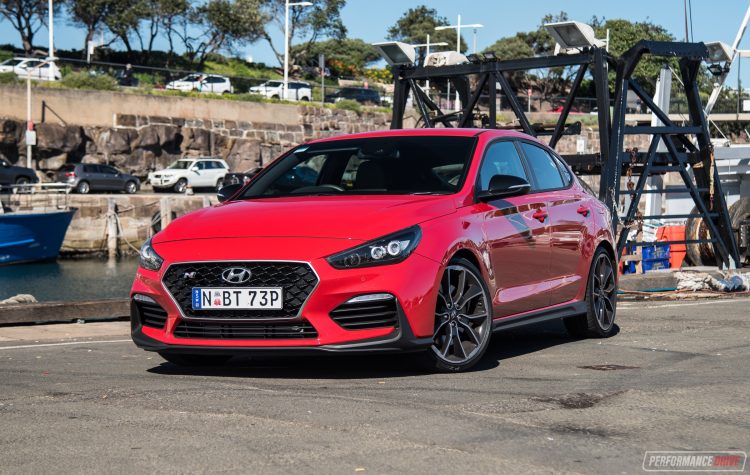 What’s a Fastback? Hyundai actually offers the Fastback body style in the regular i30 range in some parts of the world. In Australia we only get the spice-infused N Performance version. But that’s okay with us. To answer the question though it is a hatchback sedan. From the side profile it looks just like a sedan, complete with a small boot overhang. Instead of a boot lid it has a full hatchback door, with the rear windscreen swinging up with the boot. Fundamentally, it provides increased cargo space over the regular hatch, but also a more accessible cargo area. More on that later.

Prices for the Fastback N start from $41,990. You can only get it with a six-speed manual transmission, and there are two optional ‘Luxury Packs’ that add things such as an electric sunroof and leather-accented seats. It demands a $3000 premium, or $5000 with the sunroof. This is pretty steep considering it is about 12 per cent of the value of the car itself. Compared with the i30 N hatch which is now priced from $40,490 for MY2019 (up from $39,990 originally), the Fastback is $1500 more expensive. Is it worth it? Let’s take a look. 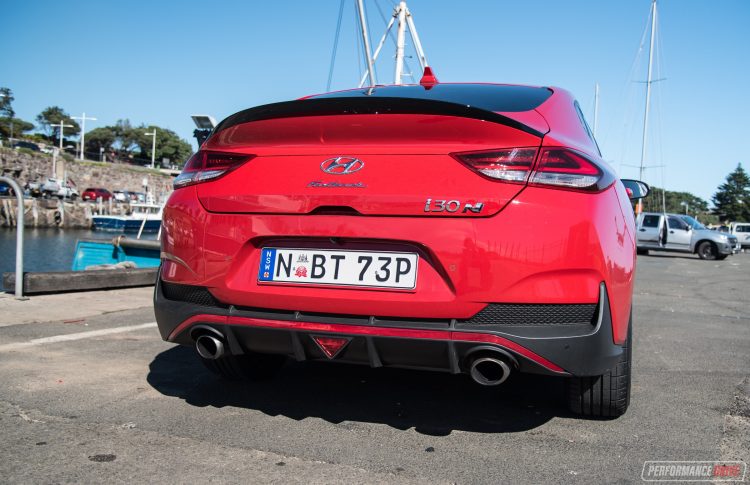 This test car showcases the basic Luxury Pack (without the sunroof). We’re not sure if it’s worth the extra three grand. We guess if things like a leather and suede trim, heated and power-adjustable front seats are important to you then that’s your call. There’s more to the pack than that, actually. Wireless phone charging, push-button start, front parking sensors, auto wipers, and LED puddle lights are also included. Once you add all of these together the three grand seems fairly justified.

Sitting inside, it is pretty easy to tell this isn’t your run-of-the-mill i30. Aside from the well-bolstered front seats, you’ll also notice the red stitching for most of the trim, and the red garnishes around the air vents in the dash. For the driver Hyundai has fit a chunky gear shifter with N branding, with perfectly positioned alloy pedals down below and a neat three-spoke sports steering wheel at your chest. Despite a heap of controls presented on the steering wheel, the layout doesn’t seem overwhelming, even while on the go. Hyundai has nailed the driving position, too. It’s spot on. And there is plenty of adjustment span for the seat and steering column. 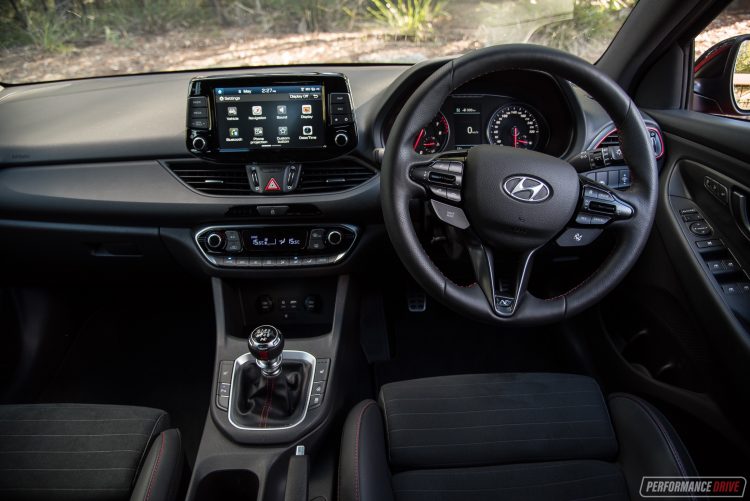 Passenger space is very respectable for this class. Seen as though it is pretty much an i30, you get all of the practicality benefits brought straight across. Headroom is good in the front, with a low centre console making the environment feel open and uncluttered. Various storage options are spread around the cabin, with trays and cup holders in the centre console, as well as a centre storage box, and bottle holders in all four doors. Rear passenger space also meets the class benchmark.

Overall practicality and user-friendliness remains a prominent part of the equation. We love the little details and the length Hyundai goes to in some areas. For example, you can adjust the instrument cluster lighting brightness via a quick-reach adjuster on the right of the steering wheel. You can turn the traction control off with one button. You can also turn the rev-matching function off with one button. We know these sound like pretty straight-forward systems, but you’ll be surprised how many new vehicles are on the market at the moment that hide such facilities or remove them completely.

As for that boot. It presents 436L of volume, which is more than the 381L offered in the hatch. You can also fold down the rear seats to open up 1337L. Again, this is more than the hatchback’s maximum capacity of 1287L. However, if you are planning plenty of trips to Ikea, you do need to be mindful of the conspicuous strut tower brace that runs across the back of the boot. When the rear seats are folded down this bar is an obvious obstacle and can make it difficult to slide in bulky items. 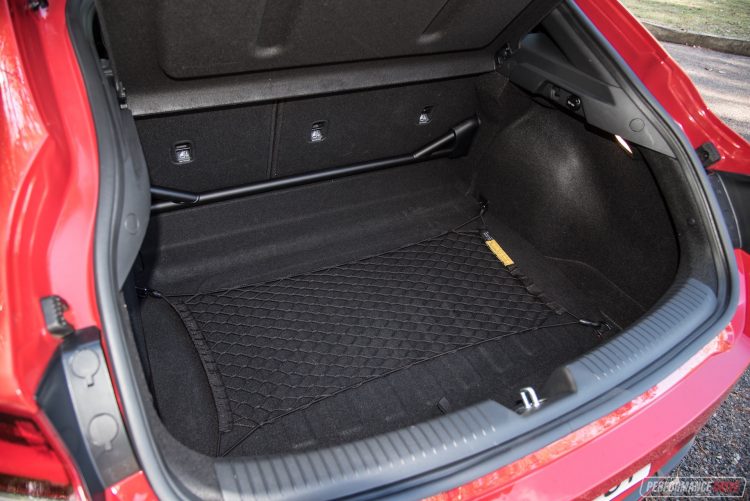 On the face of it, the Fastback N is just a sedan-looking version of the i30 N hatchback. But it goes a bit deeper than that. Hyundai engineers actually applied some revisions to the overall tune for the Fastback as it does coincide with the MY2019 update. But mainly, the body is 120mm longer overall yet the roof height it 21mm lower. This creates a wider and slightly more purposeful stance on the road. Aerodynamics are also improved due to this, with the drag co-efficient dropping from 0.32 to 0.29.

With differences in the dimensions, some equivalent differences are see under the skin. For example, the weight distribution between front and rear is altered a little bit. In the Fastback it stands at 59.7:40.3, while the hatchback stands at 61.8:38.2. In other words there is more weight over the rear end. 12kg more, to be specific. Overall tare weight (includes 10L of petrol) is 1490kg compared with 1478kg of the hatch.

What does this all mean out on the road? Nothing. It’s still a freakin’ blast to drive. Just like the hatch. The great thing about it, possibly the greatest thing, is the sheer versatility. Hyundai has jammed in a variety of driving modes and vehicle setting options for the i30 N. You can play around with suspension, throttle sensitivity, exhaust note, and even the characteristics of the standard limited-slip differential. There’s also different settings available for the standard rev-matching function, including turning it off as mentioned. Fortunately, all of these can be preset into your favourite setup and prompted by simply selecting the Custom mode. 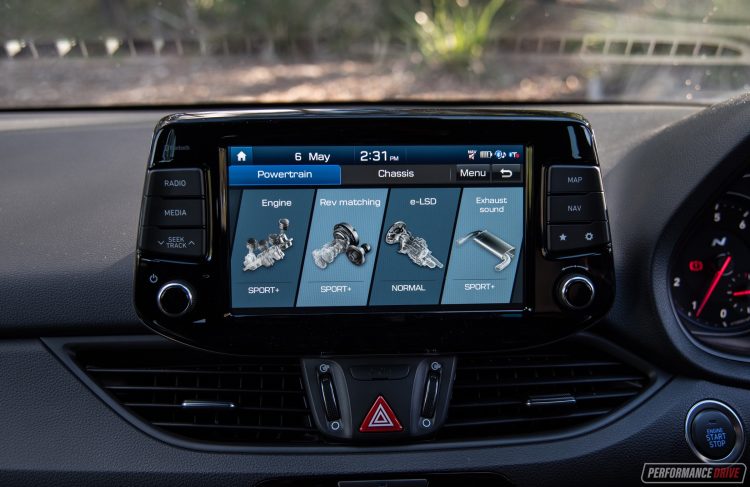 During our test we found all settings to noticeably change the way the car behaves. And out on the road this is good, because roads are often changeable. Some are rough, some are smooth, and some go through quiet residential areas. Whatever your driving style we think you will be able to find a setting that suits your needs. If you can’t be bothered there’s also three pre-set modes, including Eco, Normal and Sport.

Around corners the i30 N is a wonderfully talented machine. Flick it into the sportiness modes and it becomes a raucous rev-head. The popping and crackling exhausts make it feel like you’re in a rally car, while the firm steering and snappy throttle lets you make precise adjustments and pinpoint the car on your desired line. Revert to the default Normal mode and it becomes stealth. You can definitely hear it coming but it doesn’t bark and splutter. You’ll experience the same performance, though. 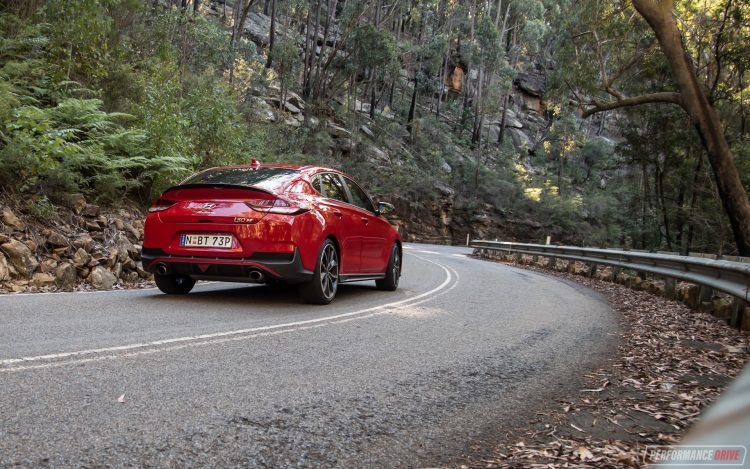 Speaking of which, the engine in this car is a real gem. There’s 202kW available at 6000rpm, and a broad-stretching 353Nm spread between a low 1450rpm and held until 4700rpm. There’s also an overboost function that lasts for about 8 seconds, providing 378Nm. Almost 400Nm in a small hatch is serious. Up through the gears you’ll feel a gut-crunching surge from almost any rpm, allowing you to pull away from roundabouts in third gear with no hesitation, for example.

Across the 0-100km/h sprint the best time we could achieve using our Vbox Sport was 6.36 seconds. Interestingly, this was without using the standard launch control function. With launch control the best we could do was 6.57 seconds. And we tried it out numerous times, even though you have to wait a few minutes before each launch control activation before it will engage again.

The problem we found is that traction is difficult to find when you’re trying to extract the most from the engine. You have to be very gentle with the controls to manage wheelspin. But with launch control, from what we could see, the traction control cuts in too forcefully, essentially reseting your accelerating progression each time it brakes a spinning wheel. 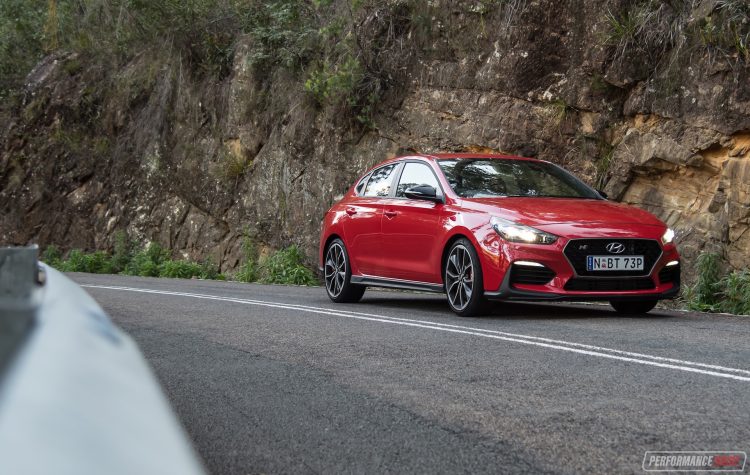 We’re not convinced the Fastback is worth an extra $1500 over the hatchback version. In saying that, the Fastback is a touch more exclusive. We guess the steeper price might actually steer buyers toward the hatch, further increasing exclusivity of the Fastback.

Regardless of which body style, we think the i30 N is one of the very best all-round hot hatches on the market at the moment. It’s fast and enjoyable, fully adaptable, and approachable for all driver skill levels. It’s also loud (or quiet), and refined enough for this class. It might not be as serious as a Renault Megane RS, or carry along a whiff of luxury like the VW Golf GTI. But instead, it comes to the party with its own set of very desirable values and skills.

Hyundai’s trump card is usually practicality and packaging. While these traits are seen here, it’s the outright performance and flexibility that wins our hearts. We look forward to the arrival of the dual-clutch automatic option, which is expected to arrive within the next 12 months. Such an option will open the car up to a wider audience and make it an even more compelling hot hatch. Go, Hyundai.

CONS:
– No rear climate vents
– Some cheap scratchy plastics in some areas
– Worth $1500 more than the hatch?