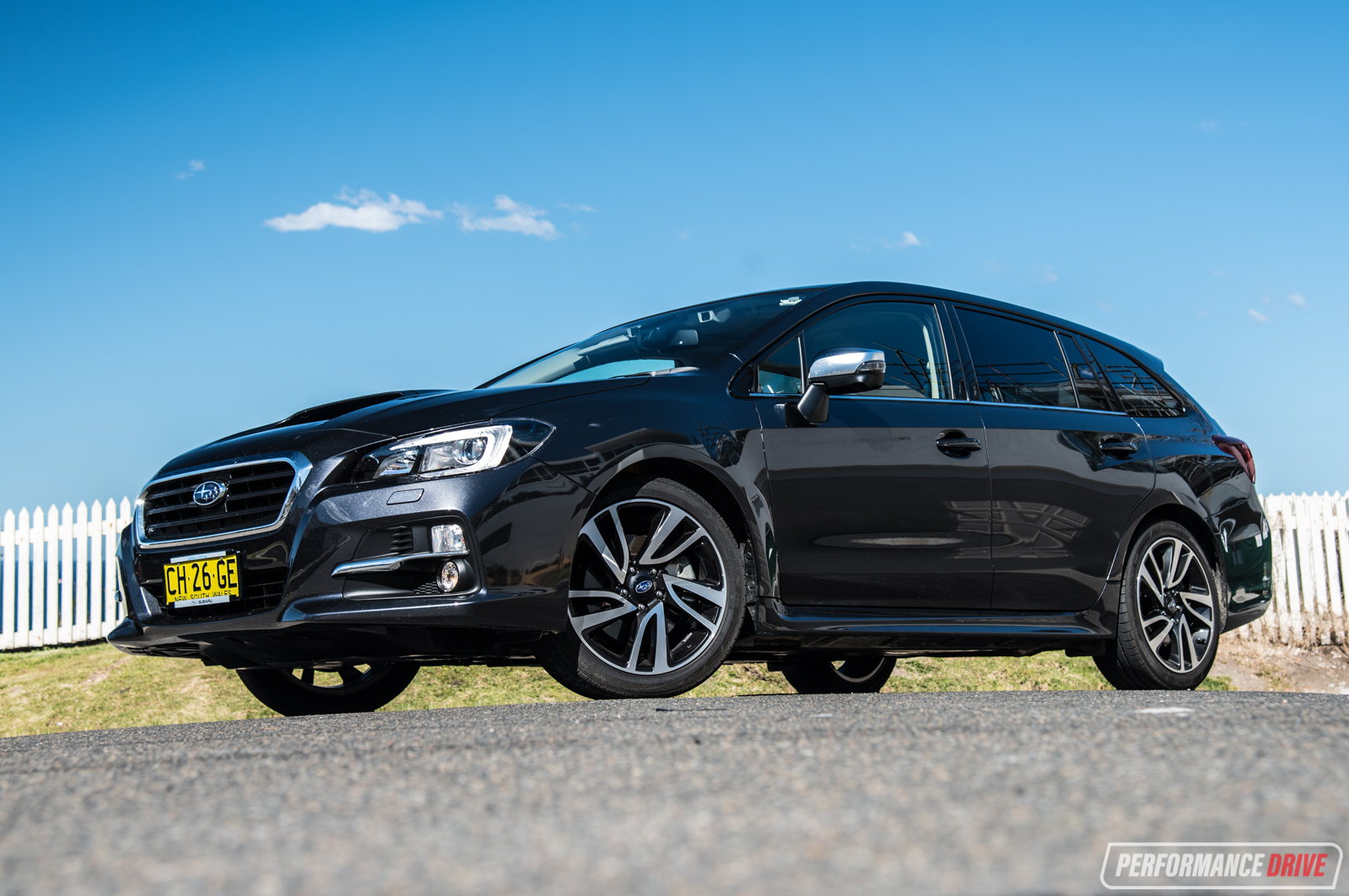 More times than not, we as performance car enthusiasts are forced to make sacrifices in the name of fun. Do you want a fire-breathing, circuit-destroying thoroughbred? No problem, but you won’t be able to fit the kids in the back, or anything more than a backpack in the storage compartment. This is exactly the reason why we love fast wagons. They offer the perfect mix of speed and practicality. Enter the Subaru Levorg. 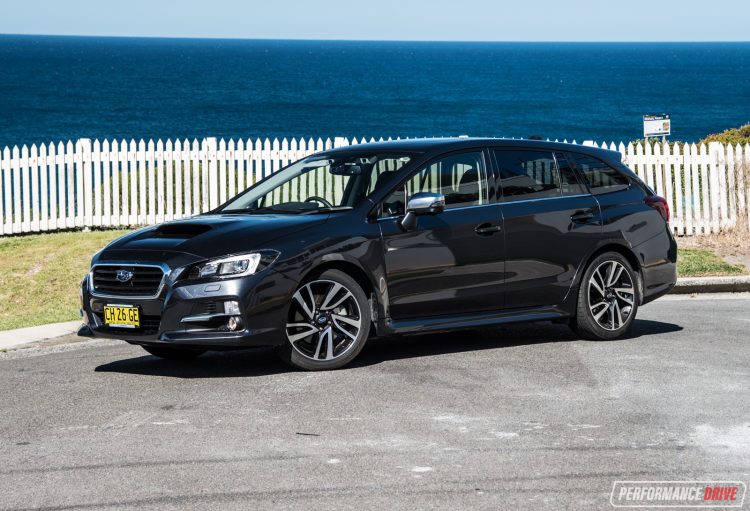 This is the spiritual successor to one of Subaru’s most popular offerings; the Liberty and Legacy wagons. Levorg even takes part of its naming inspiration from the Legacy, with the rest seemingly made up by a toddler reaching into a bag of scrabble pieces. Really though, the name is derived from LEgacy, reVOlution, touRinG. Yep, makes sense.

Subaru’s latest entrant into the lineup became a hit in the Japanese market before heading to Australian shores, where it has ridden atop waves of praise for offering WRX-inspired performance in a family-welcoming wagon body. The current wagon offerings from Subaru, such as the Outback and Forester, ride significantly higher than the Levorg and are directed at a different buyer demographic.

In Australia the Subaru Levorg lineup kicks off with the base model GT, which is priced from $42,990 (plus on-road costs). Standard equipment includes Subaru’s EyeSight driver assist system, 18-inch alloys, 6.2-inch touch-screen MMI, rear-view camera and a leather steering wheel.

On the opposite end of the spectrum there’s the Levorg GT-S Spec B, which is the most dynamic, STI-inspired model in the range. The GT-S Spec B receives numerous STI design features, like special black 18-inch alloys, spoilers, sport seats and an STI gear knob, as well as a serious suspension upgrade courtesy of Bilstein. The Levorg GT-S Spec B commands a $4000 premium over the mid-spec GT-S that we’re testing here. The GT-S is priced from $48,890.

Keeping in mind the base model WRX automatic is priced from $40,990, the attractiveness of the Levorg as a practical performer is plain to be seen. All three variants are powered by the same 197kW/350Nm 2.0-litre turbocharged four-cylinder boxer engine taken from the WRX.

* Based on our recent GT-S Spec B test results. Figures as tested by PerformanceDrive on the day. Factory claims may be different 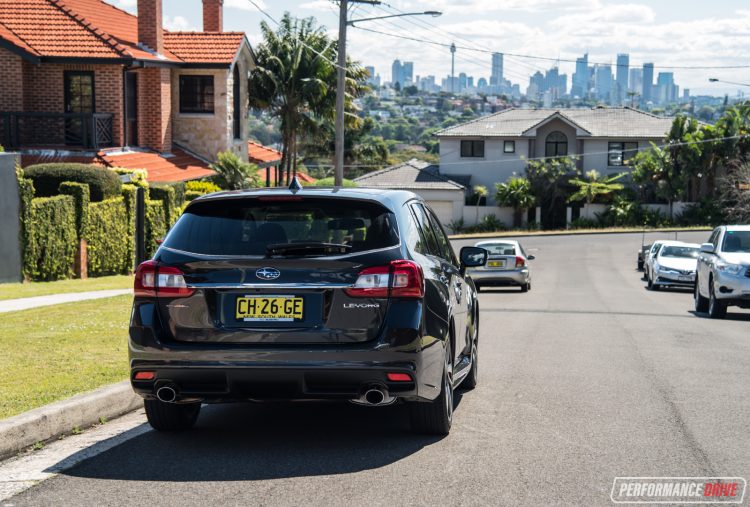 The Levorg is a genuinely attractive proposition so long as you’re not offended by the design language currently employed on the Impreza. We’re not, and the Levorg looks great as a result of the fact it manages to maintain a purposeful, dynamic look even with its large wagon body. Despite Subaru’s intention to keep the Levorg and WRX separate, it’s hard to escape the fact they look identical, with the scoop on the bonnet suggesting to passersby that this is no boring family wagon. Check out the photo below of our Levorg parked next to a WRX STI to get an idea of what we’re talking about. 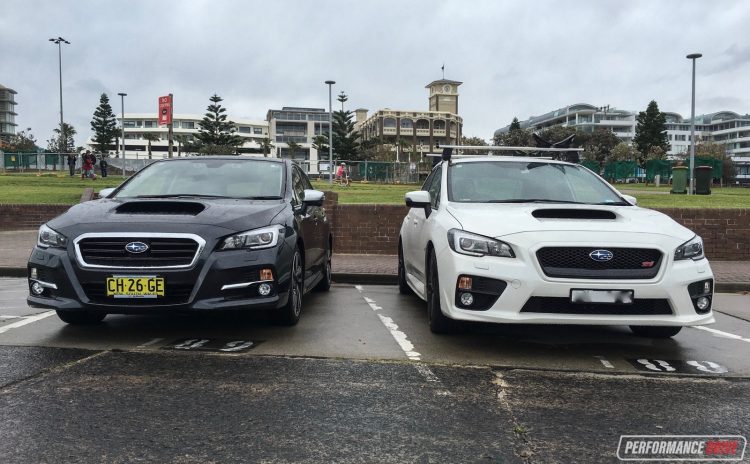 In terms of standard features, the GT-S comes generously equipped, with a leather interior with blue contrast stitching, 7.0-inch touch-screen with navigation and smartphone connectivity, an electric sunroof, keyless entry, automatic lights and wipers, as well as Subaru’s third-generation EyeSight safety system which is made up of front, side and rear cameras. These help to provide adaptive cruise control, blind-spot detection and automatic braking assistance. You get a sense the Levorg comes pre-prepared for long family road trips, with the comfortable leather seats, four USB ports to keep phones topped up and a decent six-speaker stereo system.

Inside, the interior is sophisticated thanks to the leather seats and multi-tone trimmings, with the touch-screen housed in black gloss sitting above the silver climate control knobs. The steering wheel, in typical modern Subaru fashion, is a little overwhelming in terms of buttons; there’s cruise control, audio, menu navigation and Si-Drive buttons splashed across the wheel, and paddle shifters behind.

While it may not be as large as its wagon predecessors, the Levorg is by no means cramped inside. Taller passengers might want to call shotgun for longer trips, but overall as a potential family-mover the Levorg is more than up to the task. There’s tonnes of light thanks to the large windows, unobtrusive pillars and sunroof, with great forward visibility just like the WRX. At the back there’s 522L worth of boot space with the rear seats up, which increases to 1446L when laid flat – it swallows up anything a family could throw at it. Towing capacity is rated at 1200kg across all variants, with the boot housing a space-saver below. 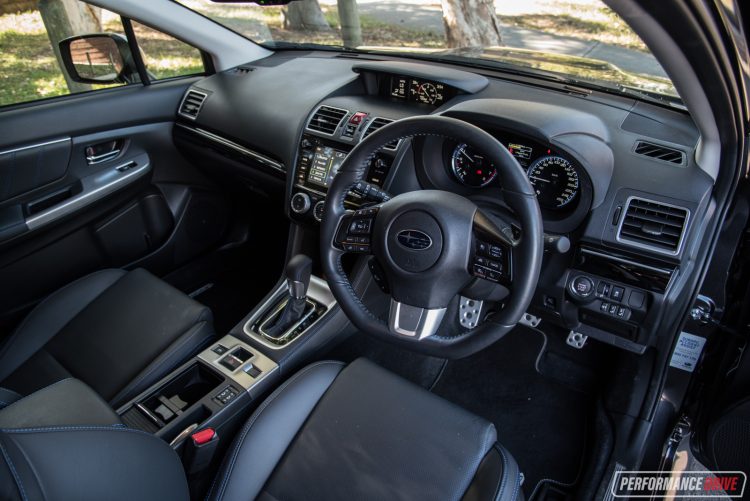 Considering this is essentially a WRX in sheep’s clothing, let’s jump straight into how the Levorg performs when you really pick the pace up. On the outset we should note that the Levorg is a genuine performer, with an official 0-100km/h figure standing at 6.6 seconds. We timed 6.36 in the GT and 6.74 in the Spec B. While the engine is faultless, the same can’t be said for the transmission. Power is transferred via a continuously variable transmission (CVT) to all four wheels with Subaru’s symmetrical all-wheel drive.

This gripe remains purely in the context of the Levorg as a performance car, not an everyday car. We’ll explain more throughout the review, but essentially, Subaru has prioritised the CVT for fuel economy benefits and bumbling around the city, essentially creating a divide between the two products. Why? Well it ensures the WRX remains the pick for those looking for a more adrenaline-pumping ride, while the Levorg opens up the door to new customers like families that would have previously walked past the WRX.

We digress. Switching the Si-Drive into the sportiest of settings programs the engine to unload available torque and power as low down in the rev range as possible, and the result is undeniably impressive. There’s an elasticity to the power delivery that may fool some into thinking the engine has more turbo-lag than it actually does, but this is down to the transmission. Put your right foot to the floor and the torque curve is slow off the mark, and a few moments later it commences to slingshot the car down the road in a very inspiring manner. 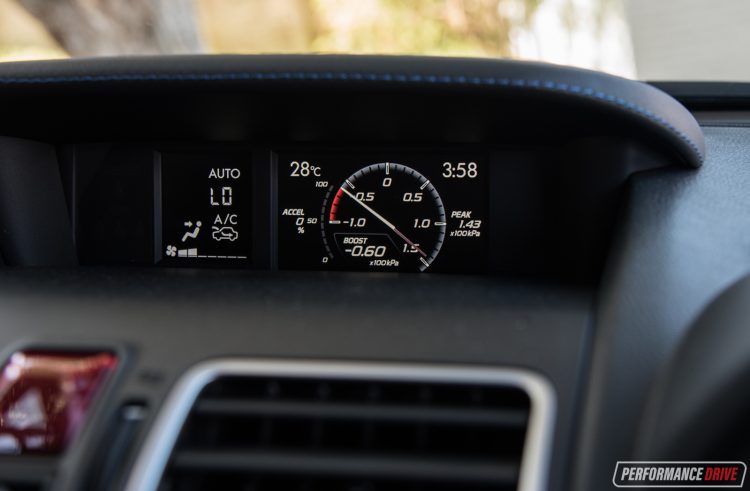 Throw the Levorg around some bends and it takes just a few moments to realise the WRX’s DNA lurking beneath. The ride is quite stiff due to the Billstein suspension added to the GT-S and Spec B variants. The setup reduces body roll compared with the GT and makes it more eager to tip in, and hold on for longer. Combine the road-hugging chassis and suspension calibration with Subaru’s AWD system, and the Levorg’s dynamic ability comes to the forefront and all the hype you may have heard about this car becomes validated.

Due to the overall nature of the car, you’ll struggle to grab the Levorg around the neck like you would a WRX; but as we’ve mentioned, this is probably an intentional move from Subaru. Instead, the Levorg is most rewarding on a road where you can begin to explore the capable chassis in the bends, and slingshot yourself out as the AWD system puts all the power down in a remarkably managed fashion. One of the downsides is that the Levorg’s brakes feel a little bit overwhelmed by the 1622kg kerb weight after prolonged punishment.

Moving on, then. How does the Subaru handle the everyday grind? Almost faultlessly. While the CVT may detract from the Levorg’s dynamic ability while thrashing it on the open road, the CVT is a genuinely welcomed component in urban traffic situations. With the Si-Drive back in the most subdued setting, the torque curve spreads further across the rev range and makes for an extremely smooth and relaxing drive, with buckets of low-down torque. Around town, the ride is undeniably firm due to that Billstein setup, but far from uncomfortable; it feels sturdy, as a wagon with performance credentials should. One of the only downsides in terms of casual driving is that the suspension feels as though it is missing some much needed compression range at the front, which causes the car to bottom-out quite easily on uneven surfaces like country roads. We experienced this in all three variants of the Levorg.

Subaru claims a combined fuel consumption figure of 8.7L/100km, which we struggled to match perhaps from being a little over-excited about the WRX underpinnings. In mostly city driving we averaged around 9.6L/100km during our week-long test. We’re sure an owner could see a similar figure to the official rating in the real-world after extended use, especially with some highway driving in the mix. 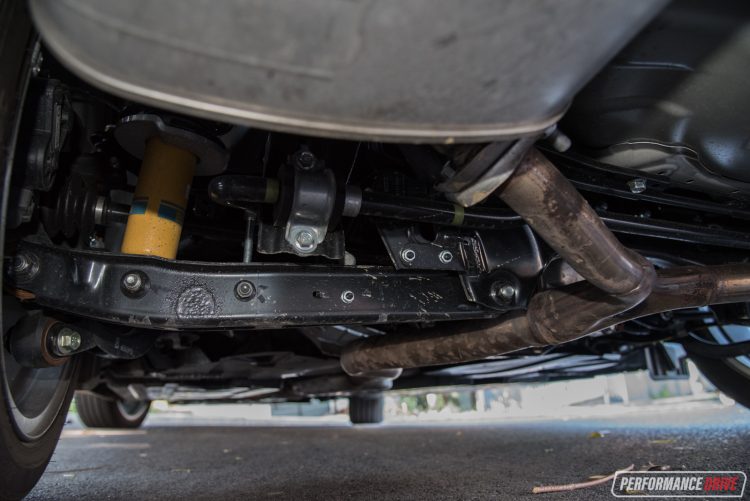 We can see the intentional logic behind the choice of transmission Subaru has gone for, as much as no manual option does sadden us; or a traditional automatic for that matter. Subaru intends to keep the WRX and Levorg separate despite their similarities. This decision ensures the Levorg is more accommodating for a new demographic of buyers, like more mature owners and families alike that wouldn’t otherwise opt for a WRX.

Keeping our slightly irrelevant grievances surrounding the transmission to the side though, the Levorg GT-S truly is a great offering from Subaru largely due to the way it offers high amounts of fun in a vehicle that can competently handle the school run or a road trip. If you’re after a car with the dynamic ability of a WRX, you won’t be disappointed with how the Levorg handles either, or the way the engine performs and responds for that matter. The fact there aren’t many competitors around that can offer all of this for under $50k makes the Levorg a very appealing package.

CONS:
– CVT auto only; no manual option
– Front suspension can bottom out easily