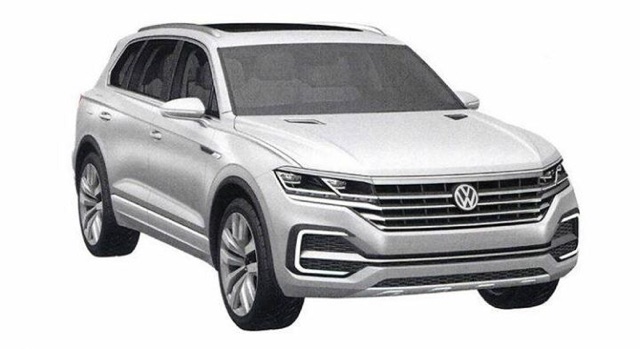 3D images of what very well looks to be the 2018 Volkswagen Touareg have surfaced online, via French Facebook page Virtuel-car. These could be authentic patent images that give us a first look at the next-gen SUV.

Drawing heavily from the T-Prime concept shown at last year’s Beijing Motor Show, this production version, if legitimate, is quite faithful to the concept but for the addition of bonnet and three-quarter guard vents, with a slightly toned-down grille. The interior is expected to be far more sensible than that of the concept.

The 2018 Touareg isn’t expected to debut until the Geneva Motor Show in March, based on the same MLB evo platform that underpins the Bentley Bentayga, Audi’s new Q7, as well as the upcoming third-gen Porsche Cayenne and Lamborghini Urus hyper SUV. This platform should help the big SUV lose some weight, in turn assisting with performance, agility, and economy.

It joins a rapidly expanding arsenal of VW SUV’s including the Atlas (aka Teramont), Tiguan and Tiguan Allspace seven-seater, and a T-ROC Polo-based small SUV on the way.

The new model is set to be 269mm longer, 20mm lower and 60mm wider than the current Touareg, if we are to go off the concept’s dimensions.

A hybrid powertrain as previewed in the show car is a high possibility, using the Golf GTE and Passat GTE’s 185kW/370Nm turbo four-cylinder in combination with electric motors. Other diesel and petrol variants are also likely.

If these images are official patents, Volkswagen will probably unveil the model online in the coming weeks. We’ll keep you updated. 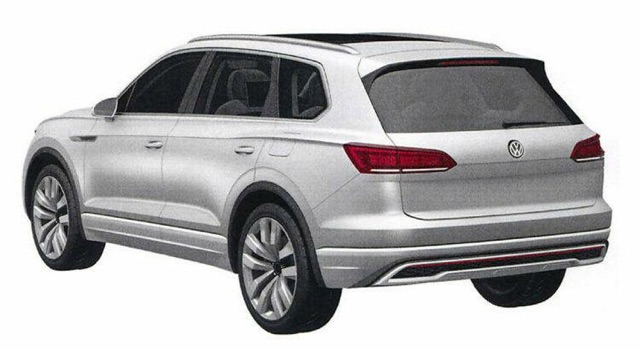