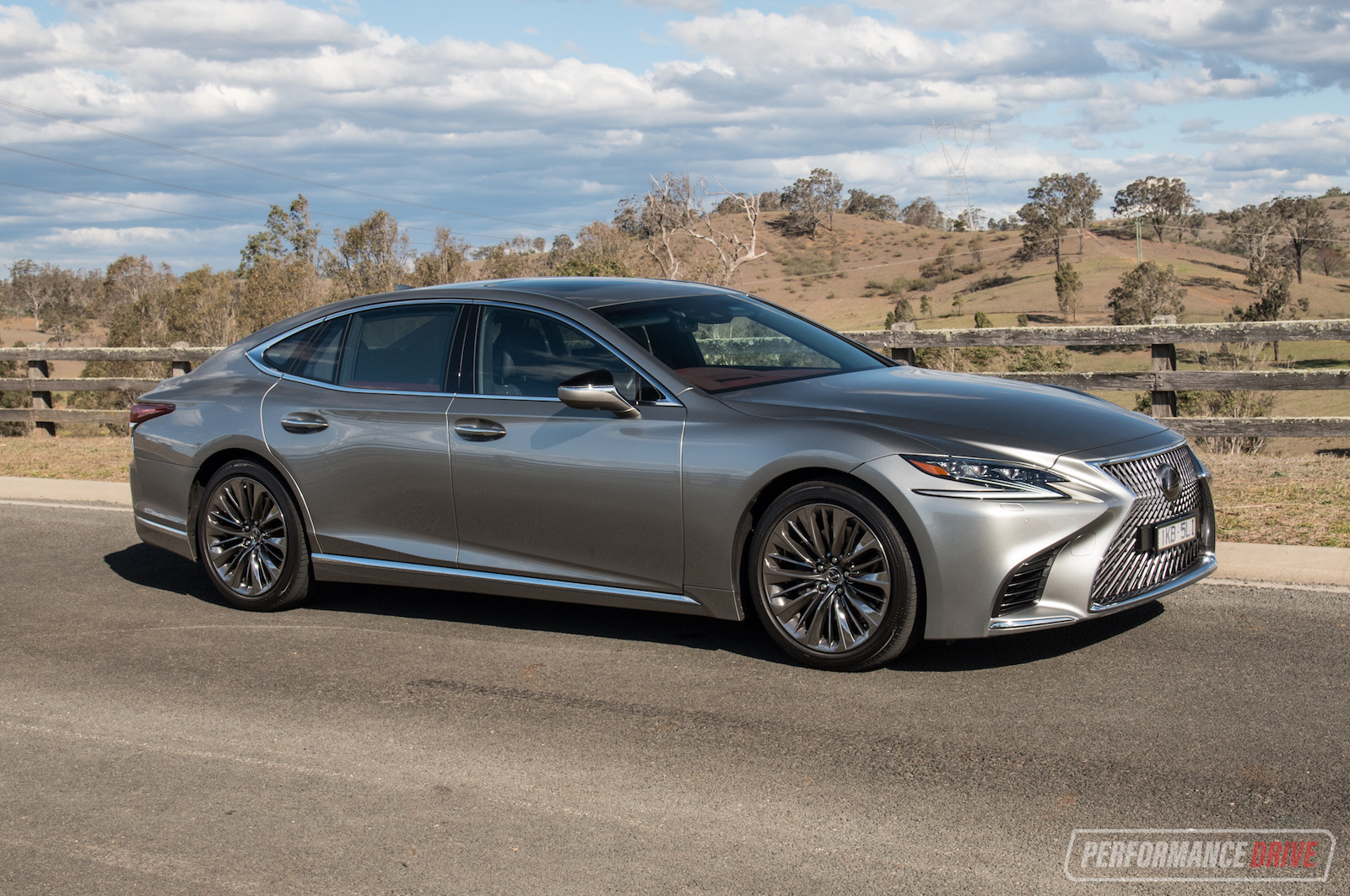 Not only does the latest Lexus LS 500 debut a brand new twin-turbo V6 engine that could make its way over into other Lexus models in the future, it also resets the brand’s benchmarks in terms of award-winning interior design and attention to detail. 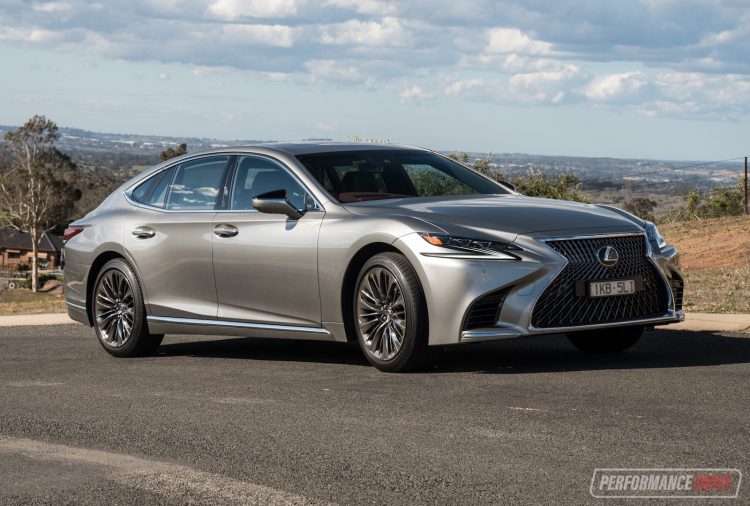 Two main variants of the new LS are offered in Australia. You have the LS 500 as we’re testing here, featuring a fresh 3.5-litre twin-turbo V6 producing 310kW and 600Nm, paired to an equally-recent 10-speed automatic transmission with rear-wheel drive.

Being a product of Lexus there’s also a hybrid version like with all showroom models (except the LX), and it’s called the LS 500h. It comes with a 3.5-litre non-turbo V6 that’s meshed with an electric motor assist system, producing a combined output of 264kW. Unlike the LS 500, the 500h uses a CVT automatic 10-speed hybrid transmission. 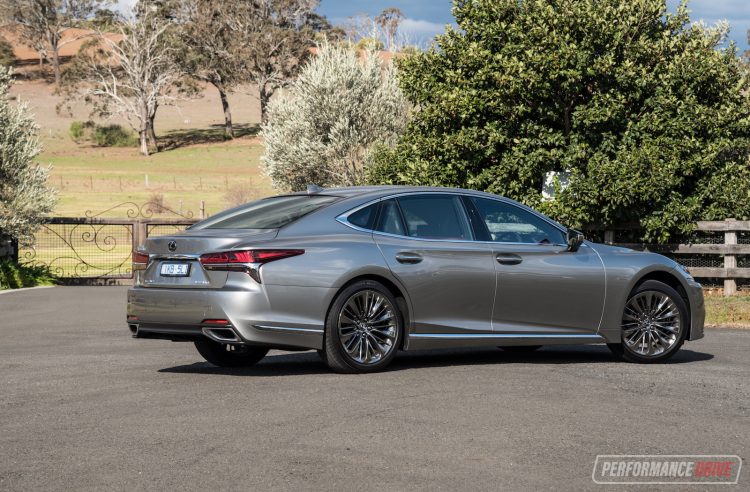 Normally, we’d start off by talking about what a vehicle comes with in terms of front-seat features and accomodation. But for the LS 500 we think it’s appropriate to start off with the rear seat area as that’s likely where buyers will spend most of their time.

This is a proper limousine. Make no mistake. For starters, rear seat legroom is boundless, and you can recline the two outer seats for more relaxation and comfort. On the passenger side (Sports Luxury only), there’s a special recline function that pushes the front seat into its forward-most position, allowing the rear passenger to lie almost vertical in the seat with a fully-extendable electric ottoman-like leg rest providing support. 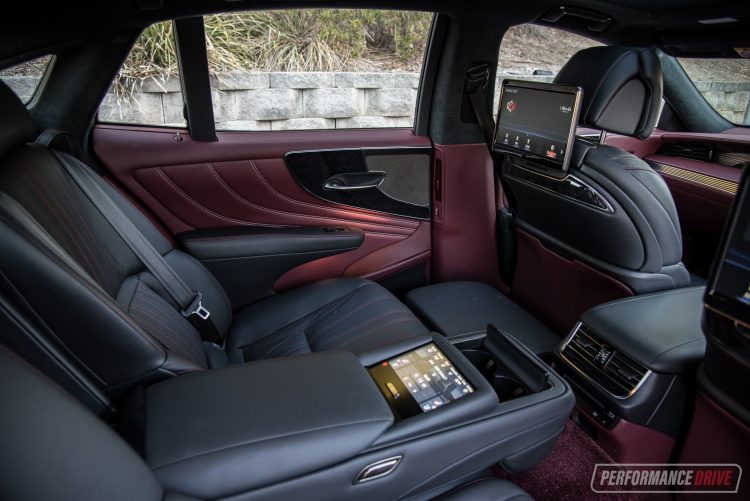 Flipping down from the middle seat, rear passengers are treated to a bespoke touch-screen module which provides controls for everything from the rear climate control, seat adjustments and soothing massage functions, controls for the power blinds for the rear and rear-side windows (Sports Luxury only), and for the twin 11.6-inch multimedia screens (Sports Luxury only). These screens can do pretty much anything, with HDMI ports, USB and Blu-ray disc reading capability.

Front passengers aren’t completely left out. All of the on-board entertainment and car settings are navigated through a huge 12.3-inch-wide LCD screen which is controlled via Lexus’s somewhat fiddly-albeit-impressive touch-pad system. We think the touch-pad does offer a certain wow-factor in terms of in-car technology, but it can be a bit impractical and distracting to use while you’re driving in our opinion. You can fiddle around with the response settings and the dimensions of the pad have been increased from 62mm to 65mm for improved operation compared with previous systems, but we can’t help but think some rival setups are nicer to use.

For the driver there’s a complex 8.0-inch TFT screen for all of the instrument cluster information. It’s an intricate display which is cleverly layered by chunks of leather-wrapped dash, so it looks really cool and again, has that wow-factor. But for us the sheer amount of information on display can be dazzling. Fortunately, you can customise the readouts a bit for a cleaner setting. 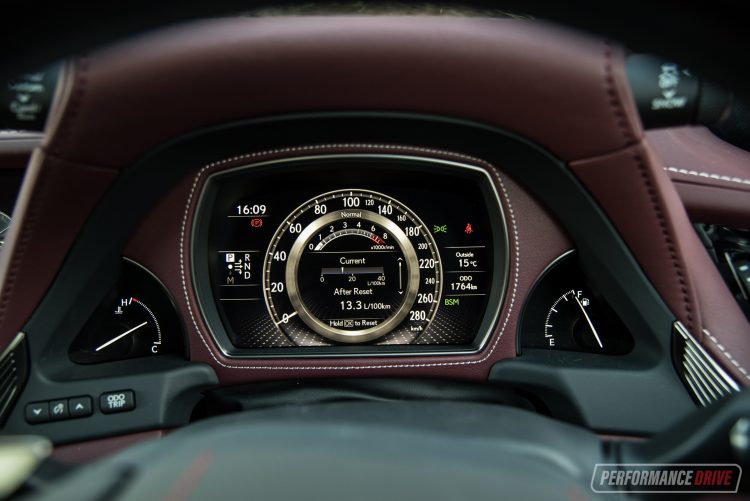 Above that is a 600mm full colour head-up display. This is the largest head-up display on the passenger car market at the moment, and it can be configured to show various live data and it can be turned completely off at the touch of a button if you or your driver prefers.

Comfort is ensured via plush, deeply cushioning seats that are covered in semi-aniline leather, perforated for breathability, with heating and cooling front and rear. The front chairs use a 28-way power and pneumatic adjustment system, and in the Sports Luxury there’s a comprehensive massage function fitted as standard.

Everything in here oozes luxury, and it’s all blended with state-of-the-art Japanese technology and fine attention to detail and design. The carpet mats are thick and luscious enough to make you want to take off your shoes before you get in. And the build quality of every fixture and fitting is among the best in the industry. 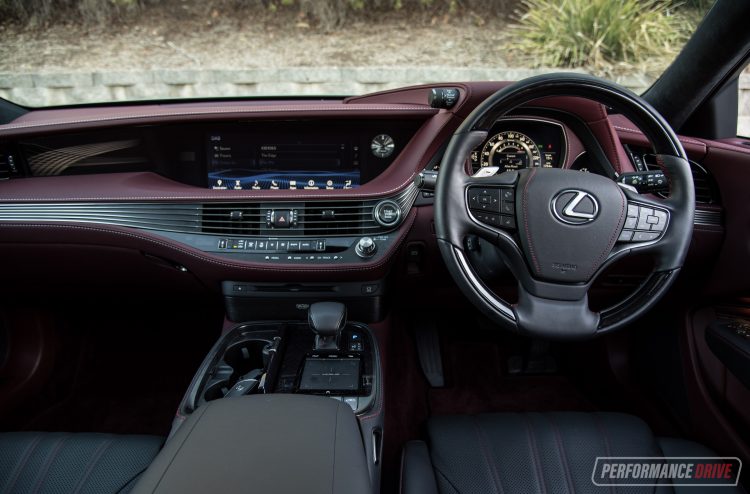 The interior was manufactured with something Lexus calls “Takumi craftsmanship”, with natural wood veneers that are individually handcrafted by specially-trained technicians. Check out the speaker grilles too, for the standard 23-speaker Mark Levinson sound system. These real metal panels are laser-cut for the ultimate precision.

As an option on the Sports Luxury you can also get exclusive ‘Kiriko’ glass inserts for the door trims which are painstakingly crafted by hand out of delicate pieces of glass. Lexus says this is the first time such ornamentation has been made available in a production vehicle.

Like many new Toyota models that are being introduced, the latest LS is underpinned by the TNGA (Toyota New Global Architecture) platform. This modular layout has been developed so vehicles of almost all shapes and sizes can share the latest chassis developments formed under the Toyota-Lexus empire. And in the case of the LS it uses a variation that’s called ‘GA-L’ – specific for large rear-drive-based models, like our friend, the Lexus LC 500.

The new platform not only helps to improve driving dynamics through optimised suspension geometry and chassis rigidity, it also assists with the efficiency and optimisation of the external dimensions. It means the LS sits 15mm lower, with the bonnet dropping 30mm and the boot dropping 40mm helping to improve aerodynamics. In LS 500 form the drag coefficient is just 0.29, and 028 for the eco-focused LS 500h.

Despite being lower, the LS comes with a new-gen air suspension system which can be configured to offer an ‘access mode’ which raises the entire car by 40mm. With the vehicle raised up the hip height stands at 555mm, which is, according to Lexus, ideal for easy entering and exiting. In this mode the seat belt buckle is extended upward so it’s easier to plug in as well. 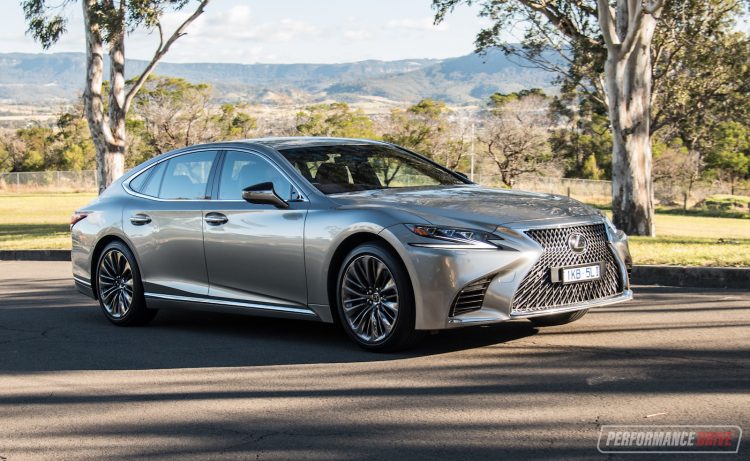 Speaking of modes, the LS 500 presents the driver with a twist-control on the instrument binnacle. Each mode changes the suspension firmness, throttle response and steering feel, and the behaviour of the 10-speed automatic transmission.

To our surprise, the transmission doesn’t rapid-fire its way up through the gears on acceleration. First gear isn’t as short as you might expect, and some of the other gears are quite long as well. Overall though this is a supremely smooth and well-synced transmission for the V6.

Speaking of that new twin-turbo unit. On paper it offers some very impressive figures, with 600Nm far outshining most V6 rivals. It is very quiet and thus seems to effortlessly gather up speed, no matter what the conditions demand. If you really get into the throttle you’ll hear a faint V6 roar, which is nice. 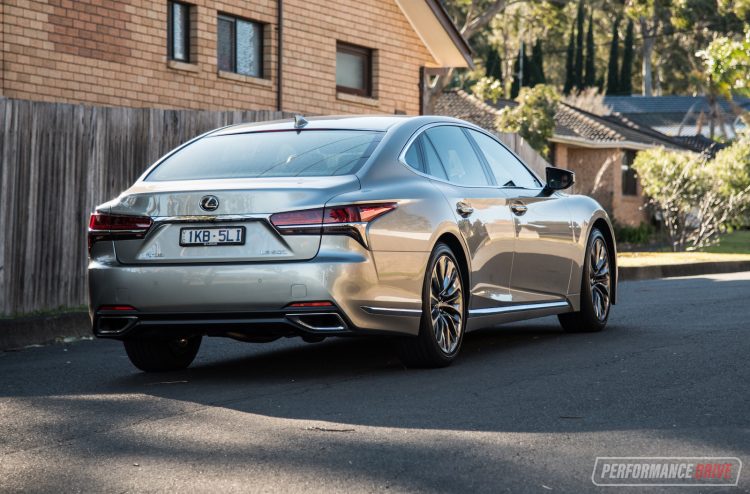 In Sport or Sport Plus mode there is some fake engine sound produced through speakers. We’re not a fan of this technology which seems to be appearing in many enthusiast-focused vehicles. In the LS 500 limousine, the fake sound has probably just been implemented because in normal mode the engine really is almost silent. Fittingly. However, we don’t think any sound enhancement is needed in a car like this.

As for measured performance, we clocked 0-100km/h in a respectable 5.86 seconds. This is perfectly quick enough for a high-end luxury car. We’re excited by the prospect of this engine appearing in other, lighter weight Lexus models in the future – rumour has it the engine might even make its way into the IS mid-size sedan which could give cars like the Infiniti Q50 Red Sport and Jaguar XE S a run for their money.

Replacing the old 4.6-litre naturally aspirated V8, this new V6’s average fuel consumption of 9.5L/100km is a big improvement on the old 11.1L/100km rating. However, you do need to keep in mind this vehicle does weigh 2235kg, so in the real world you probably shouldn’t expect much better than 11-12L/100km. We averaged around 13L/100km during our week of mixed driving. 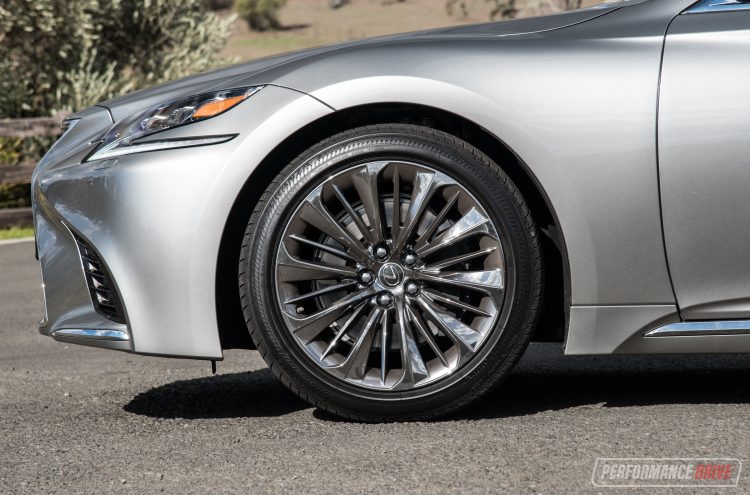 The new LS 500 does indeed reset the brand’s benchmarks in terms of interior decor and technology, while presenting a wider breadth of luxury and indulgence. It’s a majestic yet intricately-detailed large luxury sedan overflowing with advanced Japanese technology and craftsmanship. Does it stand ahead of the competition? We think it does in some areas, such as pricing, distinctness and rear-seat comfort. But, in a traditional Lexus way, some of the technology can seem overwhelming.

CONS:
– No need for fake engine sound in Sport modes
– Instrument cluster can be overwhelming with info