Despite the cute colour involved, this is not a pretty sight. It appears a pink Vauxhall Corsa (Holden Barina) in the UK has decided it doesn’t really like stealthy black Aston Martin DBS supercars, so it crashed into the side of one at a petrol station to prove its point. 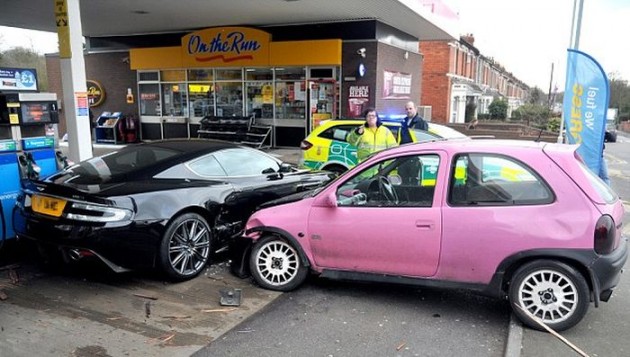 Without purposely jumping into stereotypes – even though it is very tempting to do so – it’s fairly understandable to say the pink car is the one at fault in this situation. Especially considering the Aston is still parked next the bowser at the fuel station.

Upon first glance, the Aston DBS doesn’t look too badly beaten up. The car has been developed as a super-rigid sports car though, which you can tell by the way the car preferred to shift across and slide sideways into the bowser instead of crumpling up, like the Corsa did.

It will be a very expensive fix though as it will involve some repairs of the sill panel, which is a major structure area of a car.

The Corsa does, on the other hand, looks like it has seen better days. Aside from being painted in pretty pink in the first place, the misfortune is amplified by a crushed in front end, leaving it without steering.