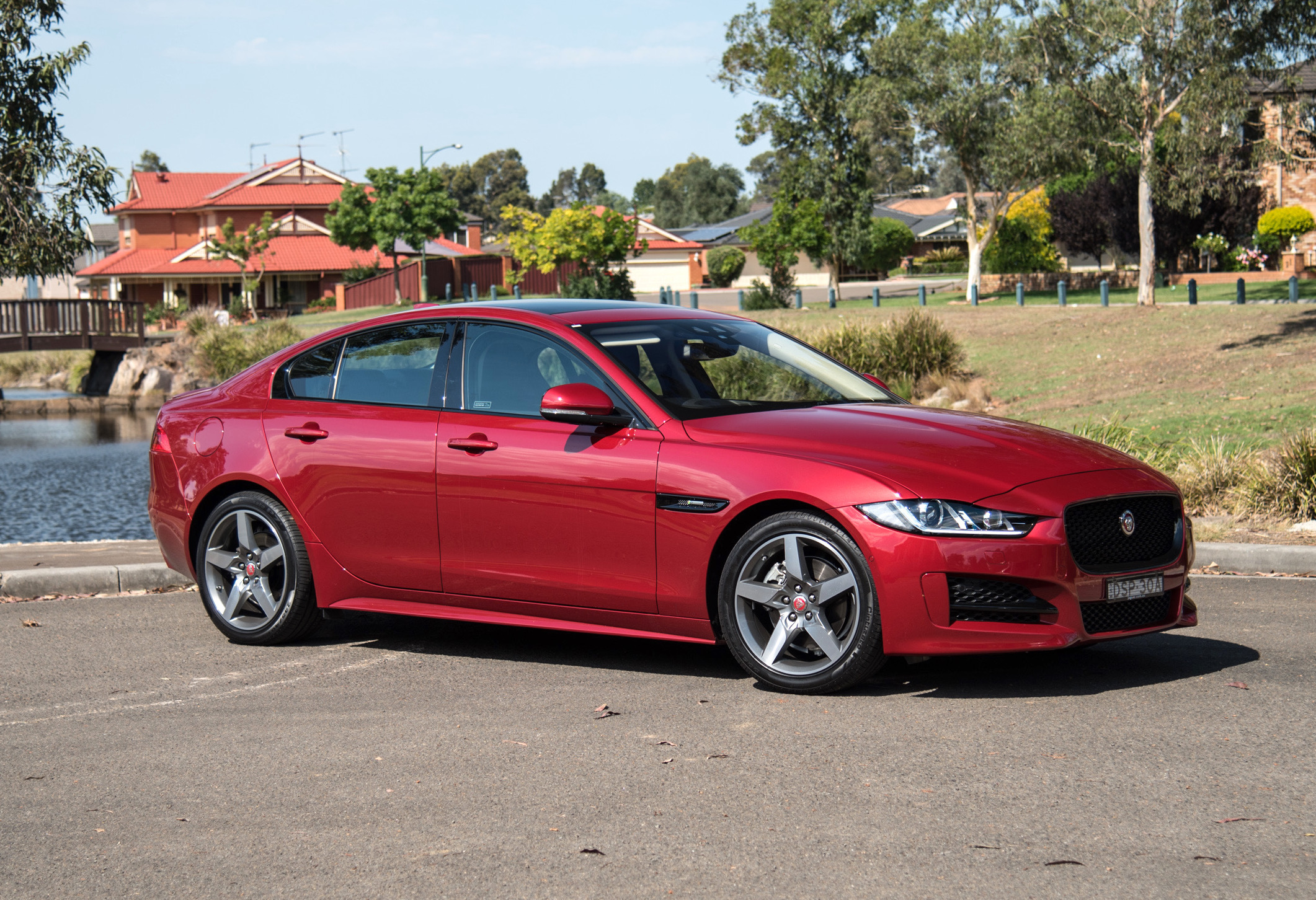 So you’re looking for a mid-sized sedan but you’re a bit bored with the common sellers? You want something with a stroke of sportiness. A lash of luxury. A punch of pizazz. For those who are after something more – a driver’s car – do yourself a favour and check out the Jaguar XE 20d R-Sport. 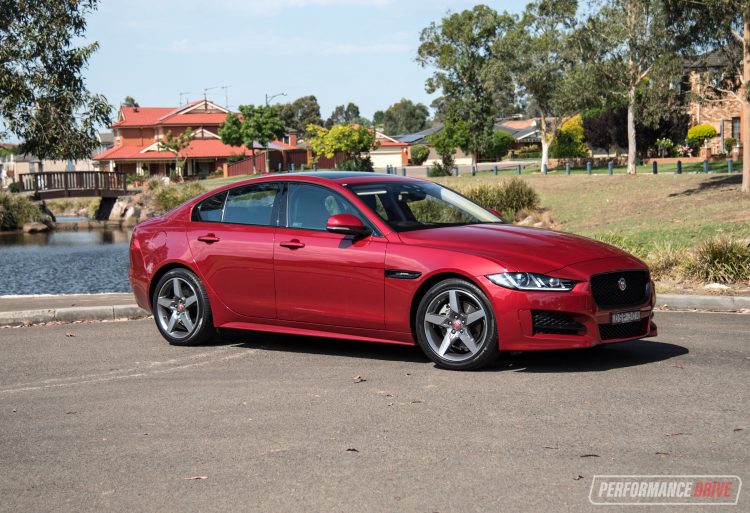 For a prestigious brand, Jaguar is surprisingly generous and flexible when it comes to lineup options. There’s an array of variants, engines, and add-ons available. The range kicks off with the Prestige, then scales up to the Portfolio, the R-Sport, and at the top, the supercharged V6 ‘S’.

There are three 2.0-litre turbo four-cylinder ‘Ingenium’ engines on offer, including one diesel that produces 132kW, and two petrol engines outputting 147kW and 184kW. The top spec engine is the 3.0-litre petrol supercharged V6, which pumps out a lavish 280kW.

* Figures as tested by PerformanceDrive on the day – in hot conditions in this case. Factory claims may be different 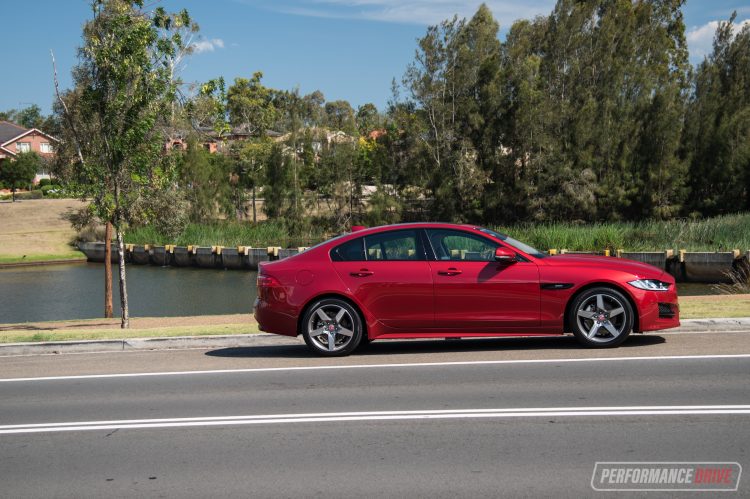 For the UK-built cat, equipment levels are nothing to be grumbled at, but you do need to pay extra for some important stuff. The 20d R-Sport is fitted standard with technologies such as autonomous emergency braking, blind spot sensors and lane departure warning, bi-xenon headlamps, assisted parking, rear cross-traffic warning, and an 11-speaker sound system with subwoofer.

However, more cash is required if you want things like adaptive cruise control with queue assist, adaptive/configurable suspension, digital DAB+ radio, head-up dash display, heated front and rear seats, cooled front seats, power boot lid with gesture control, and a surround camera system. Some of these items will send your total price north, significantly. And given the R-Sport is the second from the top, some of these items should be thrown in as standard. 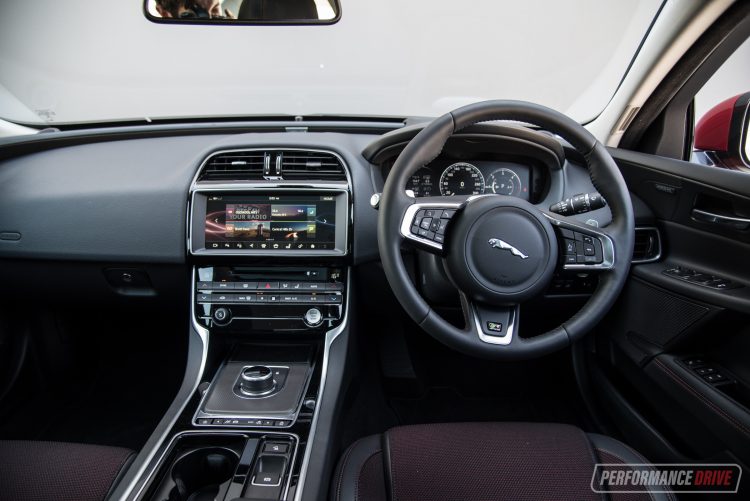 Exterior styling is one area where the Jaguar XE shines its colours. It sits perfectly proportioned on the road from front to rear. Visual lines expose a smooth and mean stance, while not shying away from the signature Jaguar design language. You can certainly tell the XE is from the same cat litter as it’s bigger brother, the XF and XJ. The R-Sport also scores a lower body kit, with skirts and front and rear aprons.

Turning to the interior and it’s a mixed bag, depending on your focus. From an aesthetic perspective, the design glows with visual appeal; like the transmission dial that sinks into the console when the car is switched off, or the beautifully polished metal and chrome highlights scattered throughout. From an ergonomic perspective, there is a lot to be desired. For example, the front air vents protrude outwards and into your personal space. It looks great, but we find they can cause you to bang your knees when entering and exiting the cabin.

Hopping in and out of the back seat is also a bit of a squeeze as the door entry width is shortened by a large door lip and narrow lower section. And once you’re in there is it pretty tight compared with some rivals. The front and rear seats are bolstered to provide a sporty look and hug, however, you need to cough up more dough if you want 18-way electric front seats. Boot space measures in at 450 litres, which is among the lowest of its competitors. 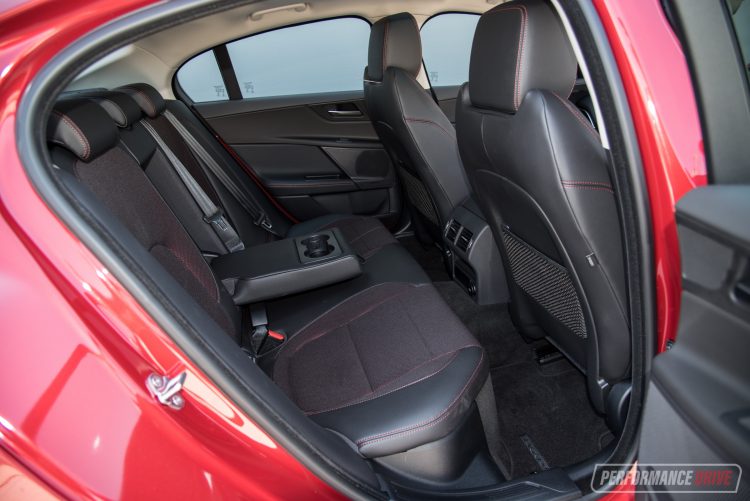 The MY2018 is fitted with Jaguar Land Rover’s latest infotainment system, consisting of a 10.2-inch touch-screen that provides lightning fast response. It comes with a dual/split menu feature, an updated predictive navigation system, natural dialogue interaction, and 10GB of on-board dedicated media storage. It is easy to use while driving thanks to its sheer size and quick-to-learn functionality.

There is a variety of sound systems to choose from, depending on how much you like to ‘pump dat bass’. The 11-speaker system with subwoofer fitted here sounds brilliant. And it’s standard. 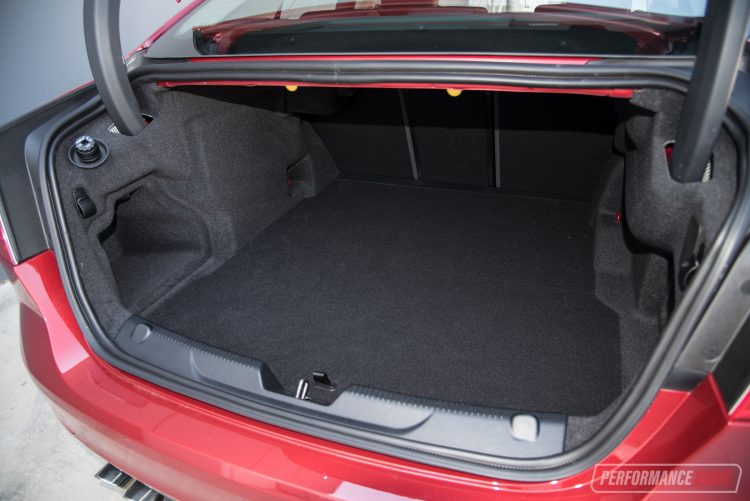 Spoilt for choice with engine offerings, the 2.0-litre turbo-diesel engine is probably the most conservative of them all. And if labelled the most unadventurous offering, it still provides copious amounts of torque, at 430Nm, and a legible amount of nip to satisfy your inner genus Panthera. It’d be fantastic to see just a slight increase in kilowatts to give a more competitive edge from 0-60km/h.

The mountain of torque coming from the rear wheels combined with the excellent eight-speed auto transmission makes a beautiful purring machine when it comes to steep hills or long drives at highway speeds. Maximum torque delivery kicks in at a low 1750rpm, so it always feels like it is ready to go without hesitation.

There are selectable driving modes at easy reach. In Dynamic mode, engine management is ramped up and traction control is made to be less intrusive, which allows you to slip the rear end around a bit on smooth corners. For extra dosh, you can have adaptive suspension fitted, which can be customised in addition to the existing driving modes. 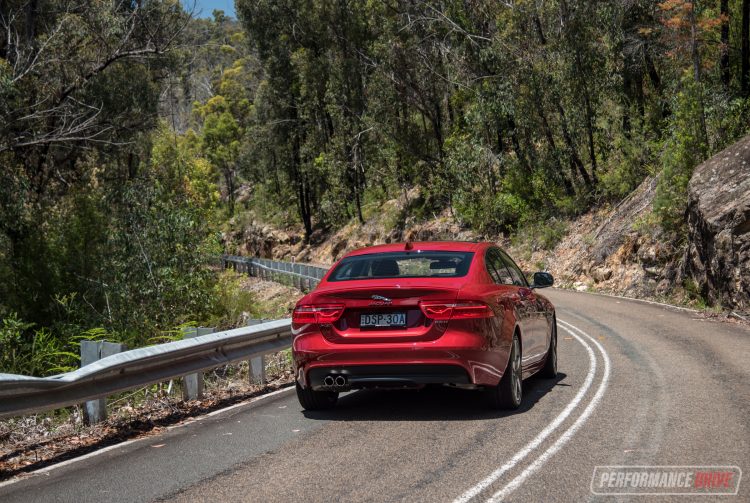 The XE uses double wishbone front suspension and integral link rear suspension, which is usually only found in larger cars that require lateral and longitudinal stiffness. As a result, the ride and handling is up there with the best. It tolerates potholes brilliantly, and will hold its grip when pushed really hard around corners. The XE also aches to be driven hard into the valleys where its dynamic talents are most apparent. It’s also obvious how quiet the baby Jag is at highway speeds. It’s a cruiser that guarantees for sleeping kids in the back (provided they’re less than six-feet tall).

Helped along by all those gears available, the engine is a real winner when it comes to fuel economy. Official figures read a thrifty average of just 4.2L/100km. Our harsh testing also produced an incredible result of 5.3L/100km. This also means that you could easily achieve 1200km of driving before you need to refill.

The frugal fuel consumption is helped along by auto start/stop technology. It’s not the smoothest procedure out there, but the rough growl it creates on start-up sounds exactly like the snarl of a real jaguar in the wild. We’re not sure if that’s on purpose or a lucky coincidence.

Not only will you save on fuel costs, you will also save on servicing. First, like it’s Land Rover cousins, Jaguar only requests for the 20d to be serviced every two years or 34,000km. Second, there is an option to provide an upfront payment to fix the service costs for five years or 100,000km. For the 20d, the total is only $1100, which translates to an annual outlay of about $220 bucks. This is amazing in the prestige market. 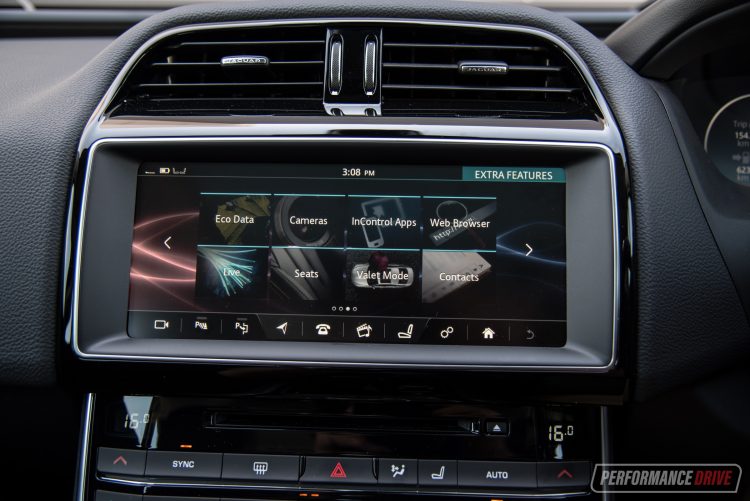 You have to hand it to Jaguar for creating a suite of cars that are very customisable, making them potentially more exclusive than any of the rivals. Almost all features and technologies that have been invented on the market are available in the XE – assuming you have the budget to order them. Having said that, there is already a reasonable amount of features that come as standard in the 20d R-Sport compared to competitors.

Aside from some unfriendly ergonomics in the interior, you can’t go past Jaguar’s unmistakable design language adopted in the XE. We think it looks the sportiest and most elegant in its class. Not to mention the capable dynamics, which back up those sexy looks.

And finally, don’t forget the 20d diesel engine is the lowest outputting performer in the range. If it’s not enough for you, there are other brilliant engines available. Otherwise, enjoy that bursting torque, fantastically low fuel consumption, and cheap after-sale costs.

CONS:
– Unfriendly interior ergonomics
– Plenty of torque, but just needs a tad more punch
– Adding all the options you want will make it pricey