A very special and extremely rare opportunity will arise in July this year with the auctioning of Juan Manuel Fangio’s 1954 Formula One World Championship-winning Mercedes-Benz W196 F1 car. It will go under the hammer during a Bonhams event at this year’s Goodwood Festival of Speed on July 12. 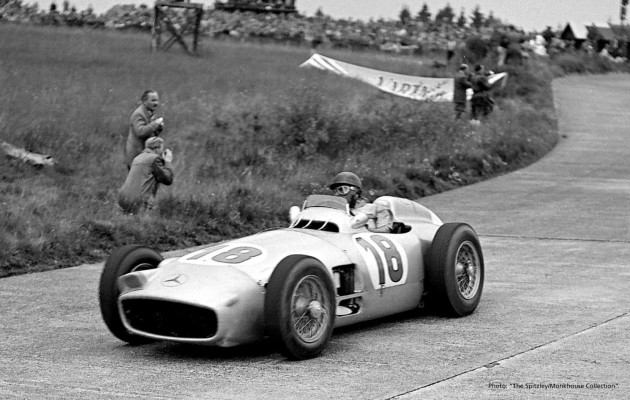 The W196 was not only a highly competitive racer, especially in the hands of the five-time world champion, it was also a pioneering piece of development for the Formula One championship.

It introduced fuel injection, independent suspension, and a lightweight spaceframe structure to the sport. It also featured a 2.5-litre inline eight-cylinder engine mounted horizontally to allow for an overall lower profile nose.

This car, chassis number ‘00006/54’, is set to become the most significant and most important historic F1 car to ever go up for auction to the public. It’s the exact car that Fangio won the German Grand Prix in on its debut race, in open-wheel form.

Robert Brooks, chairman of Bonhams and handling the sale of the W196, recently said,

“My motoring auction career spans five decades and I have been privileged to have handled some of the world’s most desirable and important motor cars.

“To handle the sale of this legendary W196 Grand Prix Car – the only one out of captivity– could well be the pinnacle. Our Goodwood Festival of Speed auction is shaping up to even eclipse the record breaking Sale of last year.”

The recent history behind the car is rather intriguing. Apparently, the car’s whereabouts was unknown for around 20 years. It’s understood it was kept by its owner in a shed somewhere, and is now said to be in an average condition.

Even so, it is expected to fetch up a mighty sum of around $7.3 million at the auction. We’re sure the lucky new owner will have the car fully restored and it will probably be showcased at a prestigious event in the years to come.