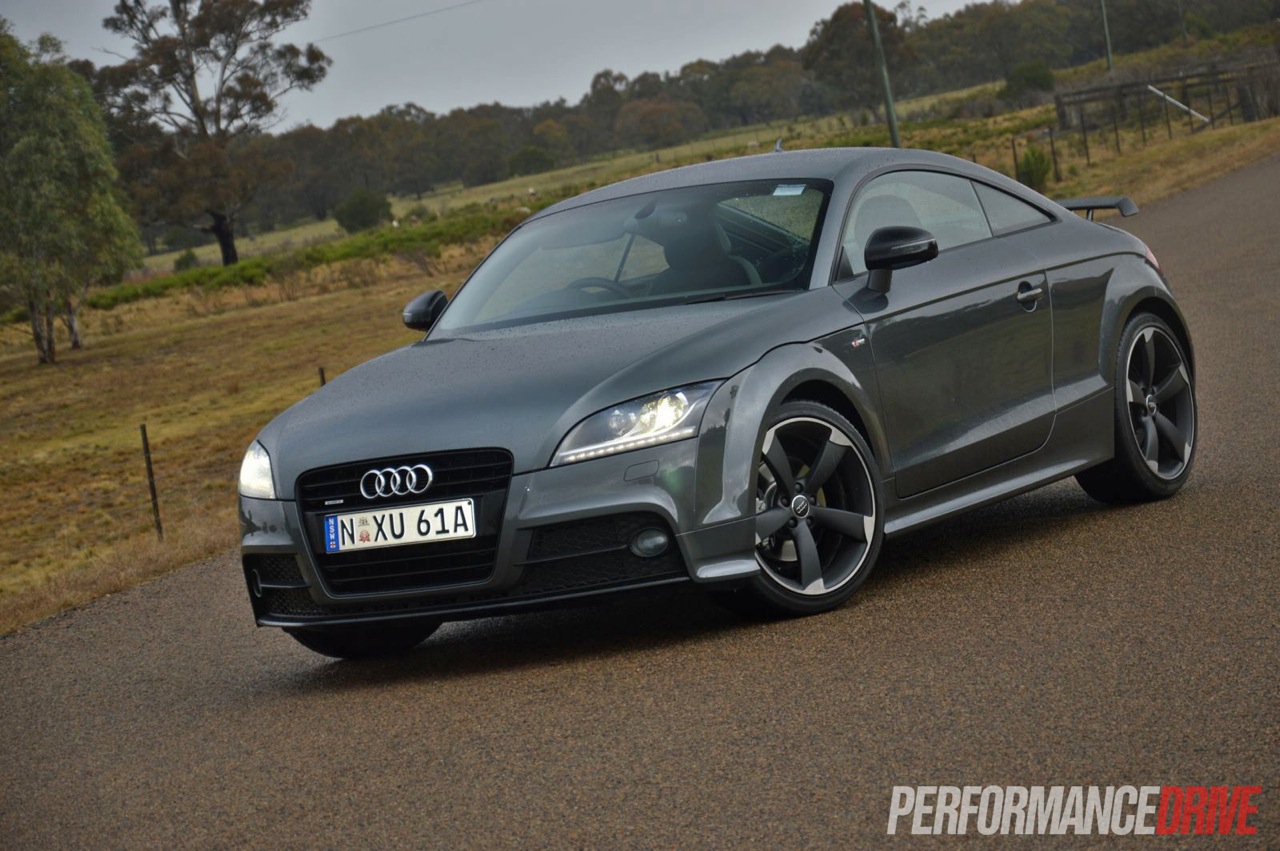 At a fraction of the cost of the stupendously quick Audi TT RS, you can now get into a new variant called the TT Coupe S line Competition, which, aside from being a bit of a mouthful to say, looks just the same while offering decent turbocharged performance that’s not far behind. 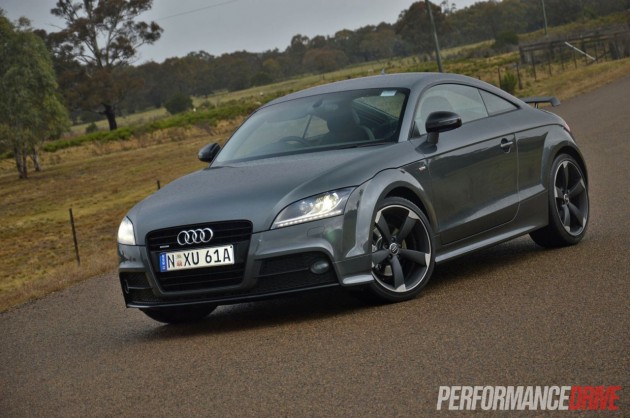 The Audi TT is arguably one of the most iconic sports cars of the 21st century, and it is probably going to be remembered in the future as one of the most influential trend-setters of its segment.

Originally launched in 1998, the German coupe is now in its second generation. It’s just as modern and as attractive as it used to be, only today it comes with a cleaner and more intelligent styling that has grown up with the Audi design language.

The current model is available in a range of variants with a range of commendable, efficient, and powerful engine and driveline options.

The flagship of which, a $140k 265kW five-cylinder tarmac tearing g-force machine, is the quickest vehicle we’ve ever tested. This S line Competition package is made to insinuate the same sort of excitement and energy as the RS, from a visual point of view only. It’s not quite as quick, but it will still put a smile on your face.

The Competition package is available on the 2.0 TFSI models, in front-wheel drive or quattro all-wheel drive (as tested) forms. Prices start at $76,850 for the front driver and $79,450 for the quattro (both excluding on-road costs). 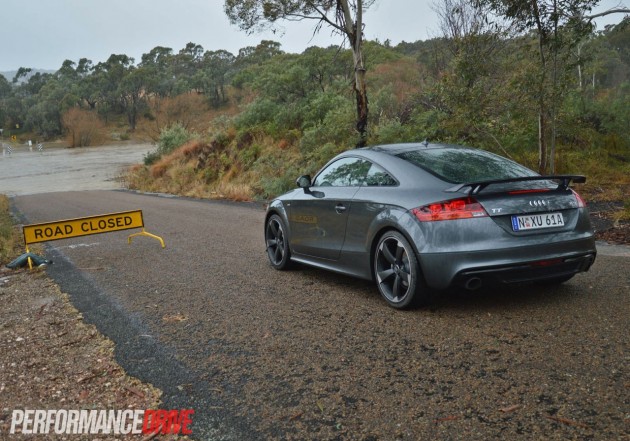 When you first walk up to the S line Competition, you’ll be forgiven for assuming it’s an actual TT RS. The bodykit is taken directly from the performance model, including the sports front and rear bumper bars, various black grilles and highlights, a fixed rear spoiler, side skirts and various vents and intakes. It even comes with the tantalising 19-inch Rotor design alloy wheels.

Peering through the alloys is one of the only ways to tell it isn’t the RS. The disc brakes aren’t perforated and don’t feature eye-popping multi-piston calipers. Instead, you’ll find a more conventional setup.

Enough about what the Competition misses out on though, the package adds $8500 worth of extras for a price premium of just $1800 over the regular 2.0 TFSI. This is excellent value for those wanting to spice up the normal TT.

Aside from the Comp pack, the 2.0 TFSI sits in the middle of the range. It comes with a 2.0-litre turbo four-cylinder engine with direct injection, producing 155kW of power and a meaty 350Nm of torque. Hooked up to a quattro all-wheel drive system and a six-speed dual-clutch auto, it’s an impressive combination worthy of true sports-car credibility.

Inside, it’s typically Audi; a super clean layout, fuss-free controls with impeccable build quality throughout. The Competition pack adds sporty bucket seats, Nappa leather, plenty of alloy trimmings around the dash and door trims, a smattering of S line logos including on the front seats, and a flat-bottomed sports steering wheel. There’s no doubt, it’s a focused and sporting place to be.

The cabin, even though it may look confined from the outside, is surprisingly roomy. The front seats can be slid right back to accommodate taller drivers, with ample room to move about and place your belongings around the centre console area.

The rear seats, on the other hand, are virtually useless for carrying human beings. You may be able to take young children on board, but the front seats would need to be in a reasonably forward position to provide bearable legroom. If all else fails, the rear chairs are effective storage pockets for largish items such as a gym bag.

Further back, the TT hatch presents a long cargo bed that’s flat and wide. It isn’t necessarily the deepest in this segment, sacrificed for the sleek exterior proportions, it does offer a respectable total volume of 290 litres. It’s perfectly liveable, and ideal for light shopping or a twin-share weekend away. 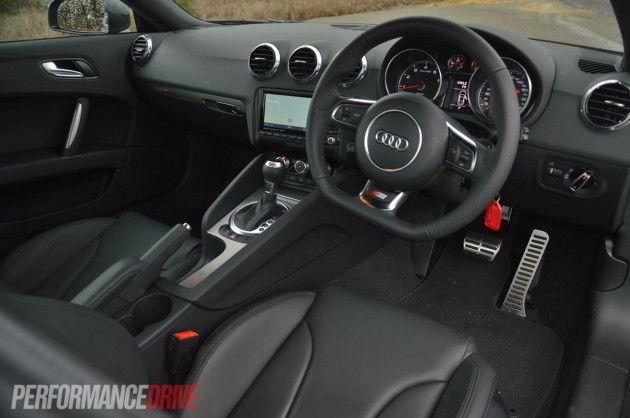 Solid, convincingly capable, and quick are terms that best describe the driving nature of the TT S line Competition.

Power from the 2.0-litre turbo is assertive and strong, while the delivery is very linear and the torque builds from as low as 1600rpm. This means turbo-lag is non-existent. It also means with every flick of the ‘plus’ flappy paddle behind the steering wheel, new gears are slung and shot through like you’re preparing a bolt-action rifle.

We timed 0-100km/h in an exciting 6.2 seconds. It’s not going to blow the doors off in a rampant rush with the tyres scantily fighting for traction, however, there is a launch control feature which allows you to hold the brake and dial up revs for a roller coaster start.

To an almost fortunate point, during our test New South Wales was inundated with rains, especially across the coast and Sydney regions. Despite the dreadful conditions, Audi proved to us why it is the pioneer when it comes to all-wheel drive systems.

Under demanding driver input, even pressing deeply onto the throttle during mid corner, the TT quattro is a mechanical mastermind. It distributes power and torque so unconditionally that it feels like the car is being pushed from behind rather than the engine sending torsion down a shaft and into the wheels. It’s extremely obedient and simply gets on with the job.

In that sense, it can feel a little bit vague and disconnect from a driver’s point of view. There’s never a moment of nervousness. By the same measure, there are times that you aren’t completely sure of the tyre traction status due to the almost stolid steering feel. Turn in is sharp, but feedback could be vitalised for an even more enjoyable experience.

The suspension is reassuringly firm and offers precise response to body movements and body control. There’s virtually zero body roll, and most of the time you come out from a corner thinking it could have taken you through much faster if you wanted it to.

Hit the anchors and the 1455kg coupe is pulled up in good time. The pads seem very resistant to fade, and the pedal seldom drops after repeated onslaught. 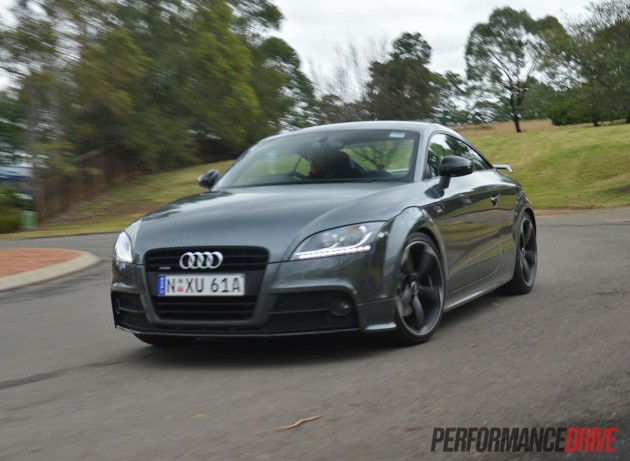 The 2.0 TFSI with the Competition pack is a spice above the rest. It looks ravishing from every angle, and it offers admirable performance for the weekend – regardless of the weather. It’s a wonderful sports car, and it’s no wonder it has been such an icon for the past 15 years.

With an official average fuel economy rating of just 7.2L/100km, you’ll be able to go for decent drives between stops too  – we averaged 8.8L/100km during our test.

CONS:
– Suspension might be too stiff for some
– Extensive options list
– Rear seats only useful for objects; not humans 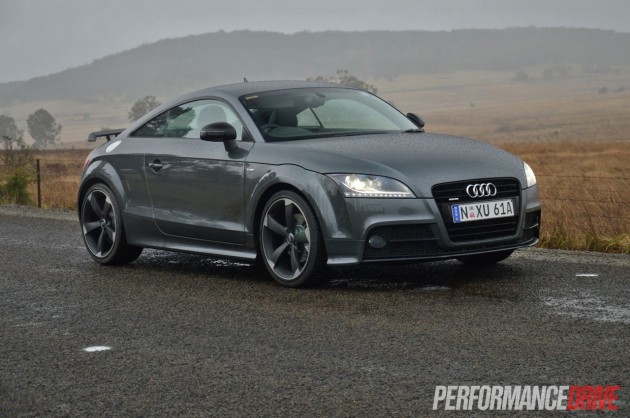