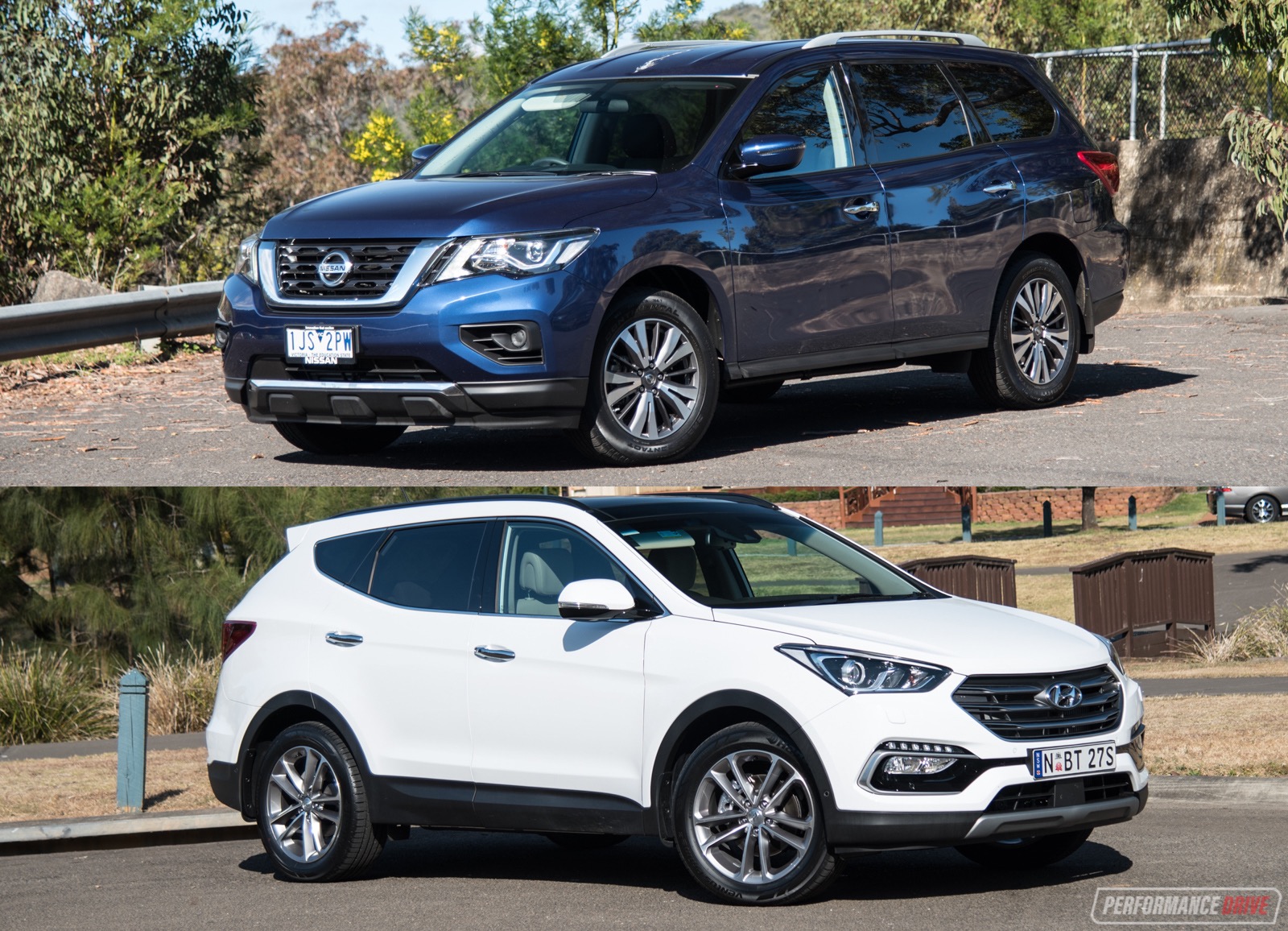 Looking to buy a large, 7-seat family SUV? Here’s a couple you should be interested in. One offers plush comfort and punchy performance and the other offers sheer practicality and economy. 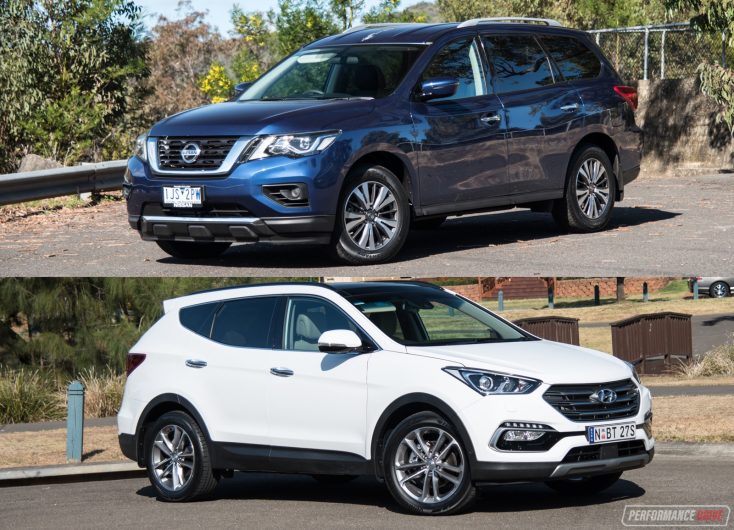 From Hyundai it’s the recently updated MY2018 Santa Fe, fitted with an economical turbo-diesel engine and a family-friendly cabin. And from Nissan it’s the facelifted Pathfinder, which comes with a powerful V6 petrol and more space than your family will know what to do with.

To be fair, the two variants we’re testing here aren’t strictly a perfect spec-for-spec comparison. Nissan does offer a hybrid option and Hyundai does offer a grunty V6 petrol. However, these two are the more popular variants of each model.

In this market space packaging is probably going to be one of the most important factors in the decision-making process. And fortunately, both SUVs here offer exceptional accommodation and space for all the family, along with copious standard features, including an 8.0-inch touch-screen media interface for both models, across the board.

The Hyundai’s unit packages in Apple CarPlay and Android Auto connectivity, with the Pathfinder missing out. However, all grades of the Pathfinder come with tri-zone climate control with separate controls and vents in the second row. This adds to the Nissan’s family touring ability.

Further more, the Pathfinder boasts ‘EZ flex’ second row seats which flip right up and out of the way to allow for easy access, whereas in the Santa Fe the seat tilts forward and slide in a conventional manner. Passenger space in the third row also goes to the Pathfinder, which offers slightly more legroom, although both feature a sliding second row to extend room. 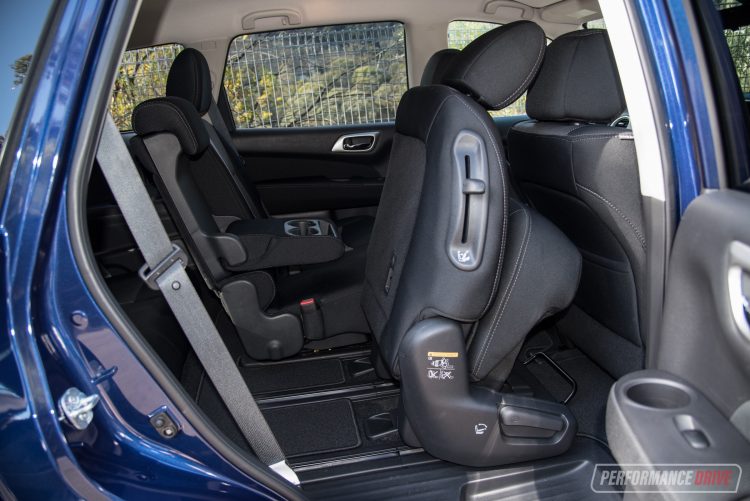 In both there are some easy-reach handles that can flip down the second row of seats from the back of the car. With them down, the Pathfinder offers a maximum cargo space of 2260 litres, defeating the Santa Fe’s 1615 litres. With the seats in place the winner swaps, with 516L in the Hyundai to 453L in the Pathfinder.

Comfort levels are very nice in either vehicle, but it’s the Pathfinder that wins by a whisker in our opinion. Even in this base ST form the seats are really soft and the MPV-like seating position requires a simple step in, with wide-opening doors. We can probably thank the Pathfinder’s North American roots for this (made in USA), as Americans love their space and bigness. In contrast, the Santa Fe’s cream leather paired with brown highlights do give it a premium appeal. A full panoramic glass sunroof obviously adds to the in-car ambience in the Highlander as well.

We give most credit to the Pathfinder for its family friendliness though. The dash fascia and climate controls are a bit… American, with far too many buttons, but the huge centre console box, the EZ flex seats, and the sheer space will appeal most out of these two.

Hyundai does claw back plenty of points with the MY2018 edition as it is equipped with advanced safety technologies, including autonomous emergency braking as standard for all models. This technology is only offered in the upper Pathfinder variants. Both have been rated five stars by ANCAP, with the 2013 Pathfinder scoring 35.73 out of 37 and the 2012 Santa Fe scoring 35.63 in the most recent tests (2018 models haven’t been tested). 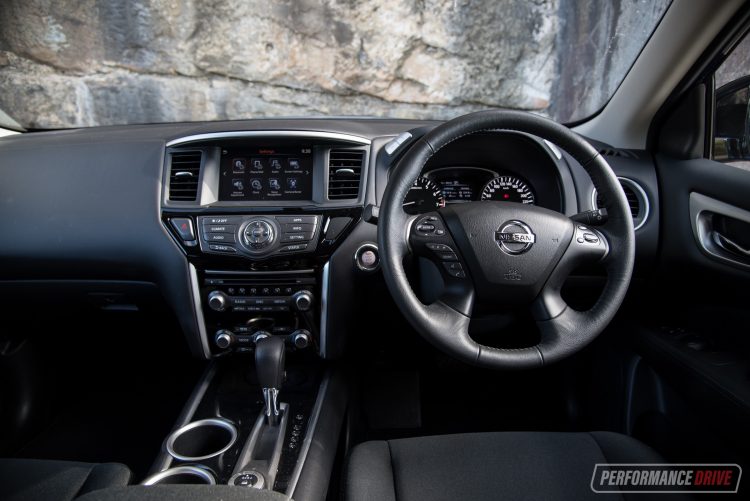 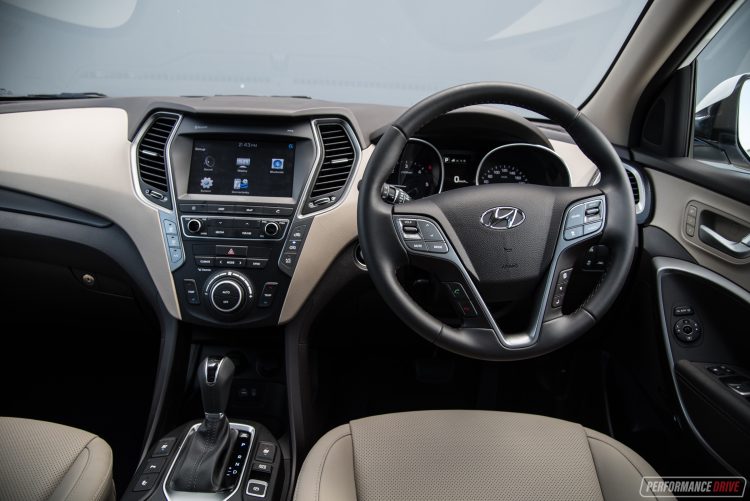 Okay, so these two do feature completely different engines, designed to suit different purposes. But we’ll compare them anyway. The ‘VQ35’ V6 in the Pathfinder is a gem, and it provides heaps of grunt. It does need to be revved though, with its peak 202kW power output not available until a sportscar-like 6400rpm. Similarly, torque is quite low, at 340Nm available at a peaky 4800rpm. These aren’t exactly the kind of stats you want for a 1985kg SUV.

In the Santa Fe, it uses a better-matched 2.2-litre turbo-diesel four-cylinder. It is only a four-cylinder but you wouldn’t know it. The unit produces 147kW at 3800rpm, and a strong 440Nm between 1750-2750rpm. These are ideal specs for the 1958kg Santa Fe. Essentially, it means you don’t have to push the accelerator pedal very hard to get the job done, especially compared with the Pathfinder and especially if you’re carrying the full family. 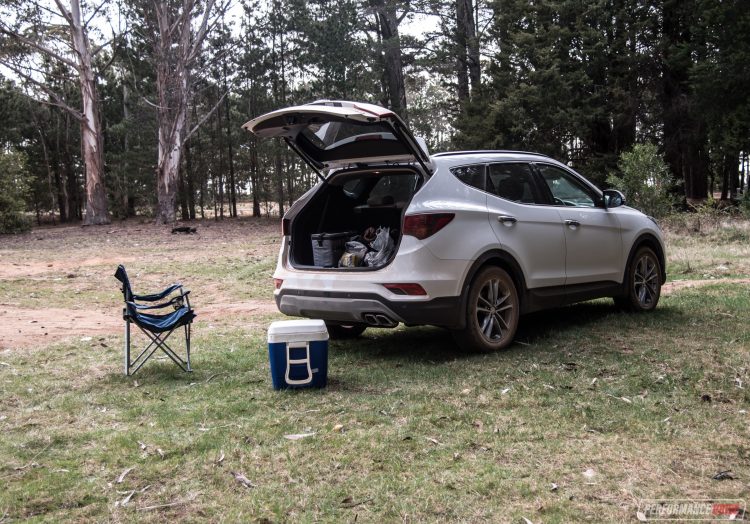 Like the interior, it’s easy to tell the Pathfinder has been created for Americans. The suspension is very cushy and, frankly, very relaxing. But, when you start to turn corners, which you’ll inevitably do at some point, seasickness becomes a potential treat. It rolls and leans into corners, and pitches and slops around under braking and acceleration. Make no mistake though, the ride comfort is like sitting on a cloud of whipped custard.

In the Santa Fe it is a much more balanced machine. It provides more than acceptable ride comfort but it doesn’t feel like it’s going to need knee pads when it goes around corners. It handles quite well, actually, and feels almost nimble and playful (for a large SUV anyway). The steering is light and communicative, and it isn’t intimidating when placing it on the road and within the lane. Due to, what feels like, a higher and more commanding seating position in the Hyundai, the Pathfinder is likely to be less appealing for shorter drivers. 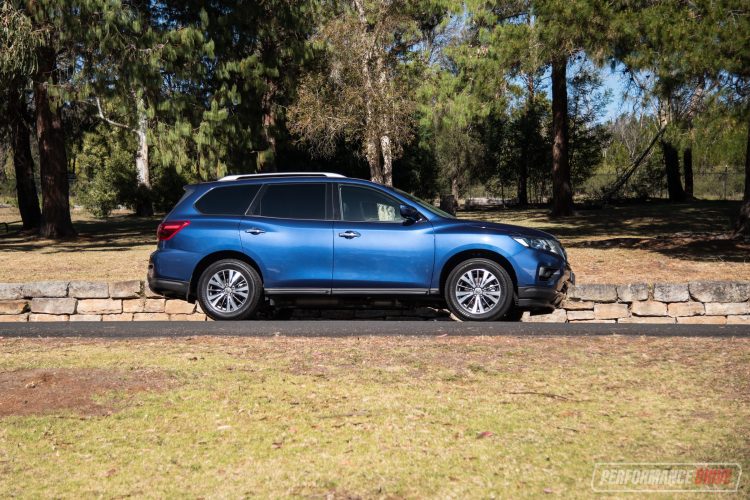 Nissan has done a great job to polish a decent product. The latest update brings a boost in in-car technology but it is a shame it misses out on some of the more advanced safety features that are presented as standard in the Santa Fe. We like the family-room comfort of the Nissan and the clever flip down rear seats with loads of space.

For the Hyundai, the driving feel is more connected and the turbo-diesel engine provides ample grunt and excellent fuel economy. The higher level of safety also bodes well for the South Korean-built SUV. In a perfect world we’d like to see the Pathfinder with the Hyundai’s diesel powertrain. But this isn’t a perfect world. So, which is the winner?

Since we place driving enjoyment at the higher end of our priorities we have to give the crown to the Hyundai. The diesel is a beaut engine and the handling and road manners are more up to scratch with what we regard as important characteristics for cars used on Australian roads. We respect those who favour the cruising comfort of the Pathfinder though, and its screaming V6.