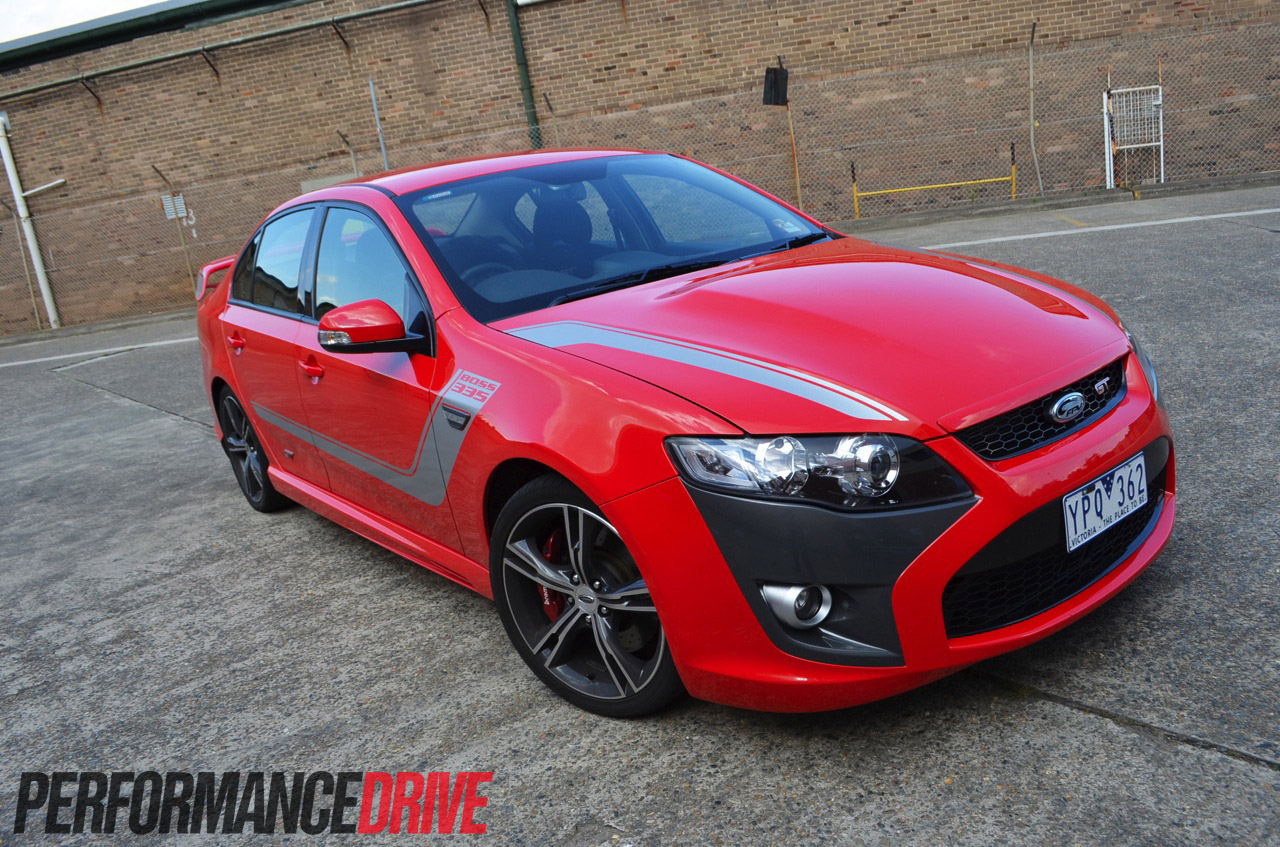 Since the GT nameplate was introduced back in 1967, we’ve seen quite a few interesting expressions of the famous Ford. The latest 2012 FPV GT FG MKII version is the most powerful yet. With a 335kW supercharged V8 under the bonnet, it’s easily capable of sending the speedometre into a frenzy… if you can get traction that is. 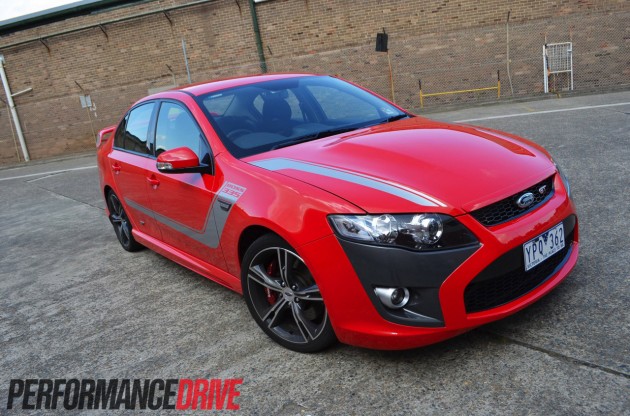 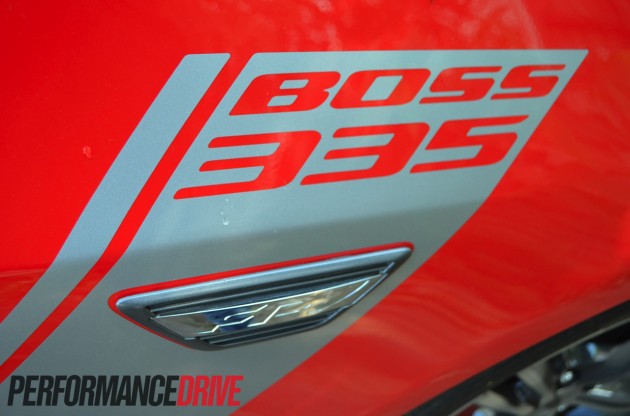 There is no other Ford on sale more exciting than the latest FPV GT. It is precisely the same car, driveline-wise, as the previous supercharged FG GT, but with the MKII model a new eight-inch touchscreen interface with reverse camera, and projector beam headlamps have been introduced.

The GT is priced from $70,790 in both six-speed manual or six-speed automatic form. As far as options go, punters can choose premium drilled/ventilated discs and multi-spot calipers ($6390), leather trim ($2950), decals; FPV hood and body stripes ($850), and satellite navigation ($1200) – why sat nav doesn’t come standard on a $70k Falcon boggles us. The screen’s there, integrate it, man!

At the heart of the GT sits an American-sourced 5.0-litre ‘Coyote’ V8 engine. Added to this is a Harrop supercharger sitting nicely between the V. In Aussie GT guise, the modular V8 pumps out a colossal 335kW and 570Nm. If you’re thinking ‘wow’, you’re spot on, it’s the most powerful FPV ever built. 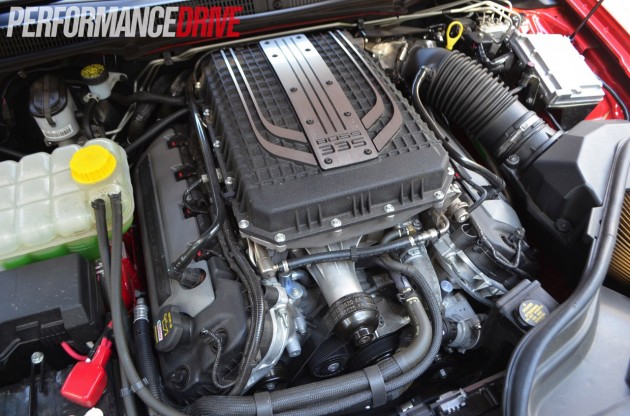 In the cabin of the GT is a regular Falcon affair; loads of legroom and headroom. As you’d expect in a top-flight sports model, the GT receives super-supportive seats up front. They’re soft on the backside for long trips, and offer great lateral and lumbar support for the bends. The back seat is also comfortable and supportive, with a centre armrest. A nice touch is the GT insignia embroidered near the headrests. As mentioned, leather is available for an extra $2950.

The overall layout of the dash and cabin trim is easy on the eye, and feels quite robust too. Nice touches like alloy pedals, a 260km/h speedo, a leather steering wheel, GT make-number plaque, and FPV scuff plates give the GT an exclusive feel.

The GT is also equipped with features such as dual-zone climate control, auto headlights, racer-like push button start, cruise control, audio and phone Bluetooth connectivity, and an alloy gear shifter – when the alloy shifter is left in direct sunlight it does get too hot to touch making it impossible to change gears until it cools down. 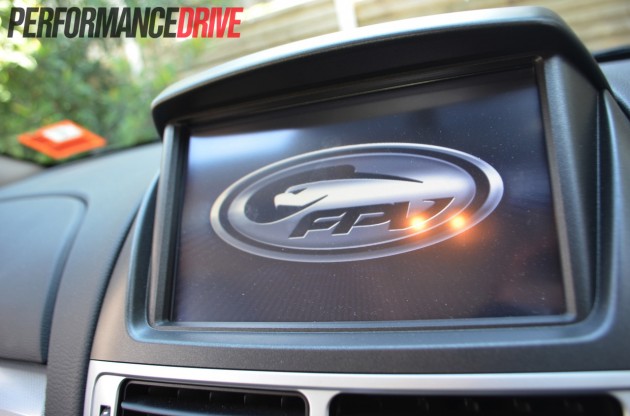 Boot space (535-litres) is more than enough for even the biggest set of golf clubs, and more. The boot area is made even handier by folding the rear seats down to expose a ski portal.

Music lovers will be happy to know the eight-speaker stereo pumps out good volume with even better clarity. You can hook up Apple and other music devices via USB, aux-in, or Bluetooth, using the new interface to change songs, albums, and, you guessed it, artist. 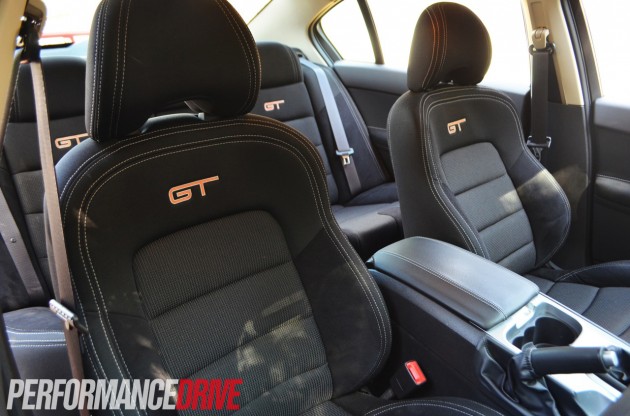 Amongst the thousands of vanilla-looking sedans driving around on public roads, the GT is quite an eyeful. And we mean that in a good way. From the large rear spoiler, to the blacked out sections under the front lights, its look is aggressive. Thanks to the optional stripes ($850 – as tested), the GT manages to blend modern styling with touch of classic. We think the stripes are a must.

The GT is available in ten different colours. Our test car was coated with the very bright Vixen red. There is no extra charge for paint choice regardless of colour. 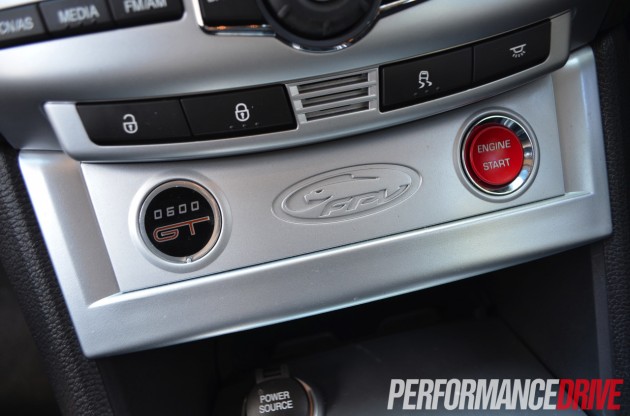 Upon starting the GT you’ll be glad to know it idles like a V8 should. The Bi-modal twin-pipe quad-outlet active exhaust system isn’t just some mumbo that’s a mouthful to say, it works to create an essential part of the FG GT experience. Essentially what it does is keep a flap in the exhaust closed when you drive easy. Hit the go pedal, and that flap opens up to belt out an almighty roar intense enough to give you goose bumps. Especially when you hit around 6000rpm.

Revving up the supercharged GT like you’re on the front row at Bathurst results in a V8 soundtrack full of crackles, pops, and rumbles, backed by the sound of the Harrop supercharger whirring in sync with the revs.

It’ll take a few attempts to get the hefty GT off the line just right. You need to find a good balance between revs and how quick you let the clutch out or it just ends in suburb-sized clouds of tyre smoke. Get it right, and the GT hops and skips under full acceleration (even with the traction control on) as it tries to put all that power to the ground.

Once you get it down, acceleration climbs uber-impressively from 60km/h, 80km/h, 100km/h, 160km/h, you decide – winding third, fourth and the other licence-losing gears out would be enough to convince a 911 GT3 owner his car is something of a snail. On the straight anyway. 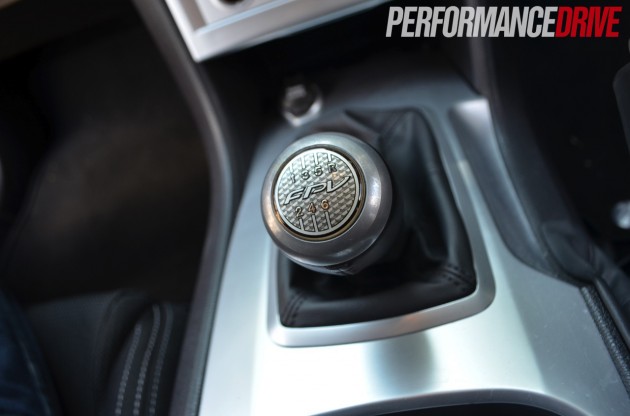 Gear throw while rewarding in its action, can be a bit chunky when shifting second to third, and fourth to fifth, but it doesn’t detract from its overall operation. One thing you will notice is the gears are spaced quite long, but working with the copious amount of torque on offer, it just means you don’t have to keep shifting to get somewhere fast – and a tall sixth gear also means it revs low for freeway cruising.

The best part of the GT’s on-road ability isn’t the power, it’s the seemingly endless torque curve that allows you to pull gear after gear like the rear wheels are in the air. It’s possible to pull from very low rpm in just about any gear.

We managed to get the GT to sprint to 100km/h in 5.1 seconds. We’re sure with the right surface and newer tyres (ours were 8000kms old) we could have broke into the four-second club… a place where most of the world’s best performance sedans call home.

We found a great mix of tight and long open roads during our test, and the GTs suspension does a commendable job of finding ‘that balance’ that’s so important to daily road-goers. The big GT is nothing less than awesome at shredding up hundreds of kilometres of long winding roads at a time, but it’s also pretty good at the tight low speed stuff, too. You need to judge the entry well, and balance the throttle though, or you will be driving out the side window.

There’s not doubting the go forward ability of the GT, and the same can be said for pulling it up. The Brembo items have a home at all four corners; 355mm discs up front, and 328mm discs in the rear. There’s never a lack of pedal feel, even when abused. You literally feel like your face is peeling off when you jump on them with force. 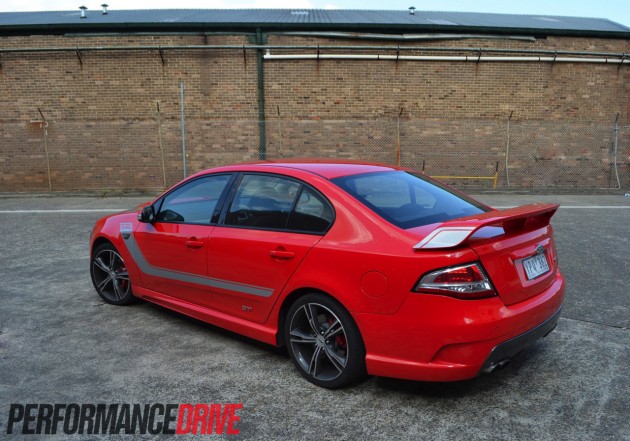 No doubt some of you are keen to read this part, given the GT’s history in track racing, and it turned out to be quite surprising.

We took it easy on the first few laps, as you should, taking each corner faster and faster as the laps clicked by.

If you’ve never driven a supercharged V8 before, go and do it if you can, the erratic sound as you belt down a straight is something else. The beauty of driving on a track is there’s no other cars to worry about, or dodgy surfaces. What this means is you can really get to know a car’s abilities well.

Blasting down the straights is a breeze given the amount of horses under the bonnet, but dancing it through the corners isn’t quite as easy. It’s no ballerina that’s for sure. 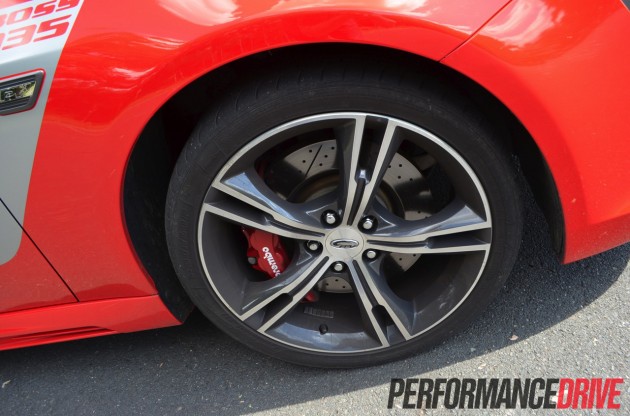 Corner after corner, the big Brembo brakes do their task extremely well, never fading, or losing the urge to wipe off speed fast. As you approach a turn the front bites in and hooks the large GT into the corner. If you come in too hot, it will have a tendency to push wide, but you can fix this by either pulling back off the pedal, or mashing it, inducing some good ol’ oversteer – always a fun way to attack a bend.

Sliding the GT is very predictable, and easily controlled. You get a good sense of when its time to reel it back in, or if there’s still more guts in the tank to keep the tail wagging.

We feel the GT could do with some wider tread on the back. It also didn’t help that our test car tyres were rather worn. Some decent tyres (semi-slicks perhaps) at the right pressures would make for an extremely quick lap time. 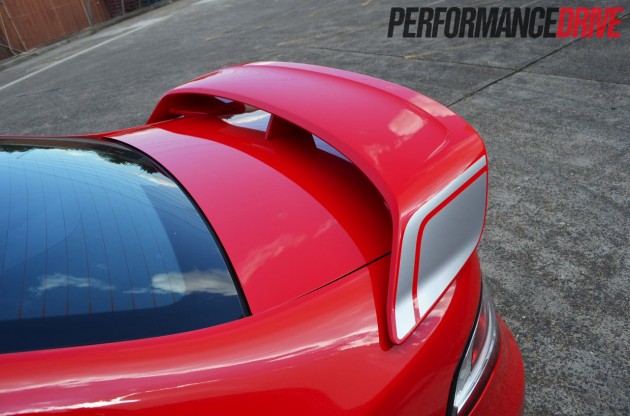 Will the 335kW FG GT become a classic like it’s older brothers? Should you buy one, store it and never let it go? It’s hard to say. The supercharged FG GTs are certainly something to marvel; they offer world-class performance for a fraction of the price of some of the big Euro performance sedans.

Also, it takes just one flick through some performance forums to see that they’re becoming a big hit with tuners alike as well – modifications as little as an ECU tune and higher-flowing exhaust has seen the supercharged GT engines pump out more than 400 rear-wheel kilowatts. Yep. nuts, isn’t it?

All new incarnations of the GT have gotten faster and more tech savvy as the decades have clicked by. Some would say they’ve become a tad generic, and that the GT should be more ‘exclusive’. At the end of the day, GTs were built so Ford could go racing, and the people flocked to them – ‘win on Sunday, sell on Monday’.

GT Falcons, or just GTs as they’re known today, aren’t to be taken for granted whatever shape or engine combo they come with, because blood-pumping V8 Fords might just have their days numbered if you go by the latest sales figures and rumors.

Until you drive, or own one, you’ll never realise just how much that tiny little badge puts a damn big smile on your noggin. The latest GT gets our PerformanceDrive stamp of approval. 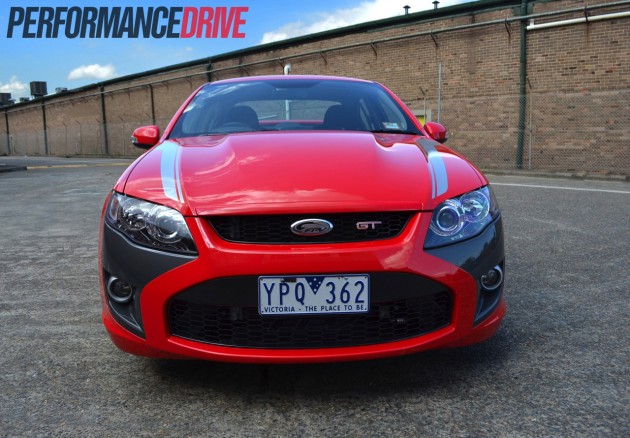